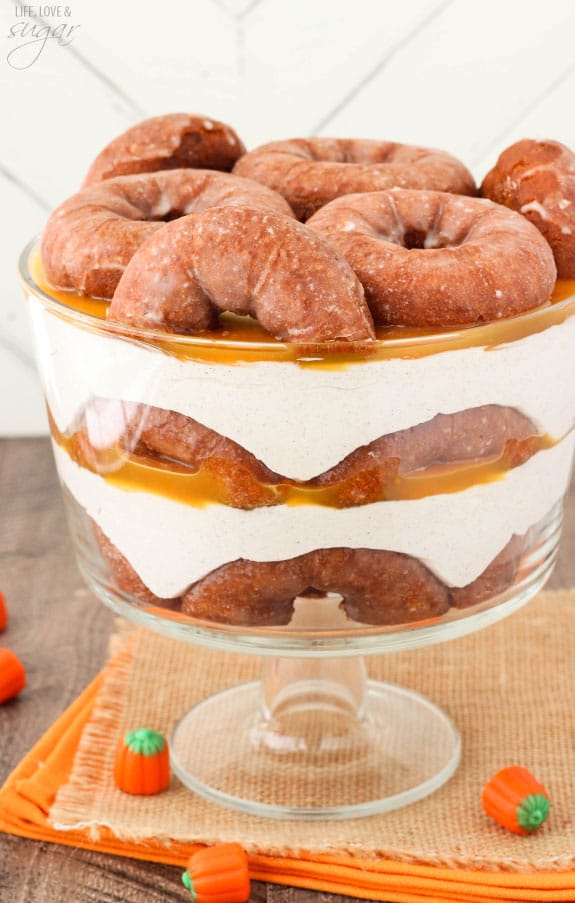 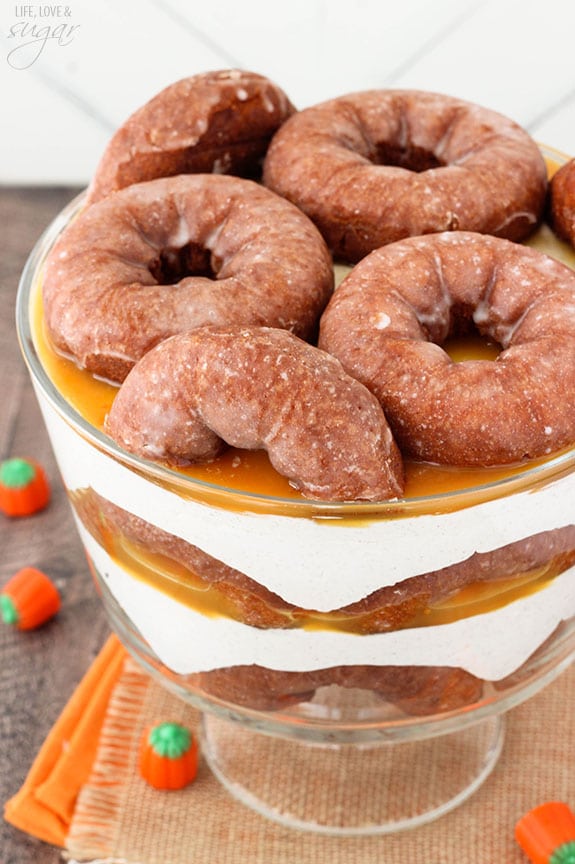 So this past weekend, the hubs and I went to the local fair with my brother and his family. We’d never been and it was pretty fun to go with them. My nieces had a lot of fun riding the rides and us adults got to eat the good fair food. 🙂

You know the stuff I’m talking about. Funnel cakes, fried oreos (so good, by the way!) and a tower of sliced fries covered in cheese and bacon. That’s the stuff that adult dreams are made of kids. Good, outrageously awesome food.

I figure this trifle is somewhat similar in it’s outrageous nature. I mean, it’s layered with donuts. Legit, full on donuts. It’s basically breakfast in dessert form. Kind of like breakfast for dinner.

See, the hubs decided one morning that he wanted to make a spontaneous trip to Dunkin’ Donuts, which is a solid 20 minutes away. I don’t know about you, but that’s a somewhat long drive for a donut. However, he seemed so excited about it that I couldn’t say no. So we hopped in the car and off we went.

Of course I knew as soon as we got there and I saw the sign for the pumpkin donuts that I had to have one. Then in true food blogger fashion I immediately started brainstorming things I could make with them. 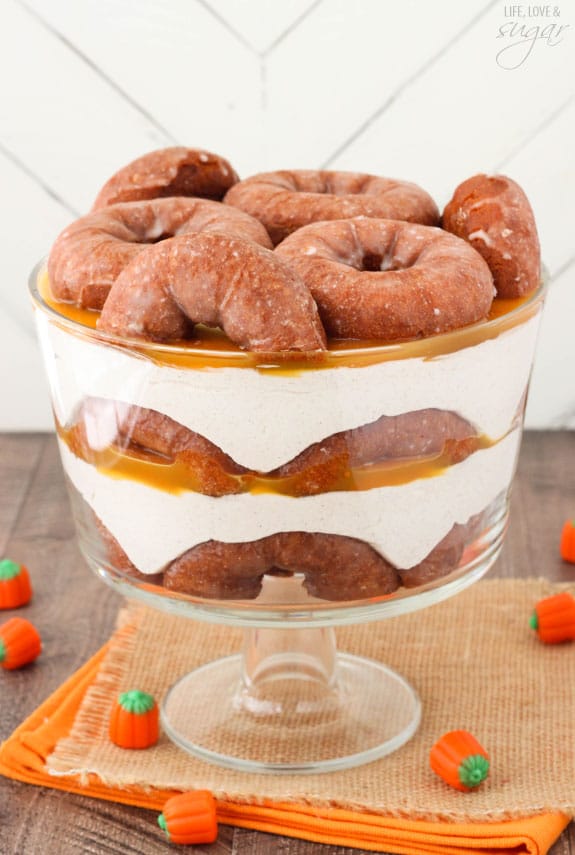 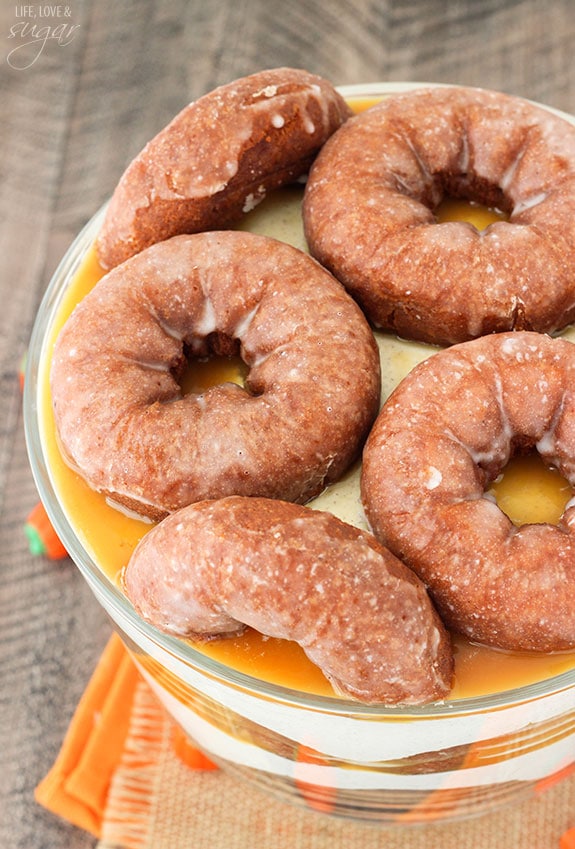 So instead of the one donut I promised myself I’d get, I walked out with a dozen and a half. #lifewithafoodbloggerwife

And so this trifle came to be!

Outrageous-seeming as it is, it’s amazing. I shared it with our church group and of course their initial reaction was pure amazement and, “Can we eat that?” “Are those donuts?”

And when they tasted it there was no going back. Love at first bite. It was a serious hit. Even a week later I had them telling me how good it was. Gotta love it when spontaneity hits the hubs and results in tasty things like this. 🙂 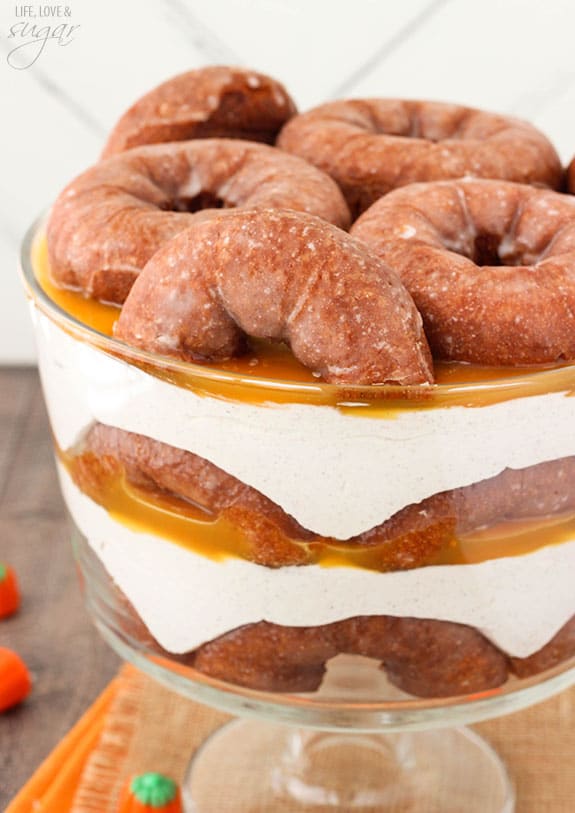 1. In a medium bowl, combine pudding mix and milk according to pudding package instructions. Set aside.
2. In a large bowl, beat cream cheese, pumpkin pie spice and ground cinnamon until smooth.
3. Fold pudding into cream cheese.
4. Fold in 8 oz of Cool Whip (or homemade whipped cream).
5. In a large trifle dish, place donut halves around the edge of the dish. You’ll use 3-4 donuts. 6. Break up another 2-3 donuts to make an even layer.
7. Top donut layer with half of cream cheese mixture.
8. Top cream cheese mixture with 1/4 a cup of caramel sauce.
9. Repeat steps 5-8, then finish off trifle with a few more pumpkin spice donuts for decoration.
10. Refrigerate until firm and ready to serve, at least 4 hours. Can be made the night before and refrigerated overnight.