These Pumpkin Cheesecake Swirl Cupcakes are a fun combination of pumpkin cake and pumpkin cheesecake all in one easy-to-eat cupcake! They are super moist and totally addicting! 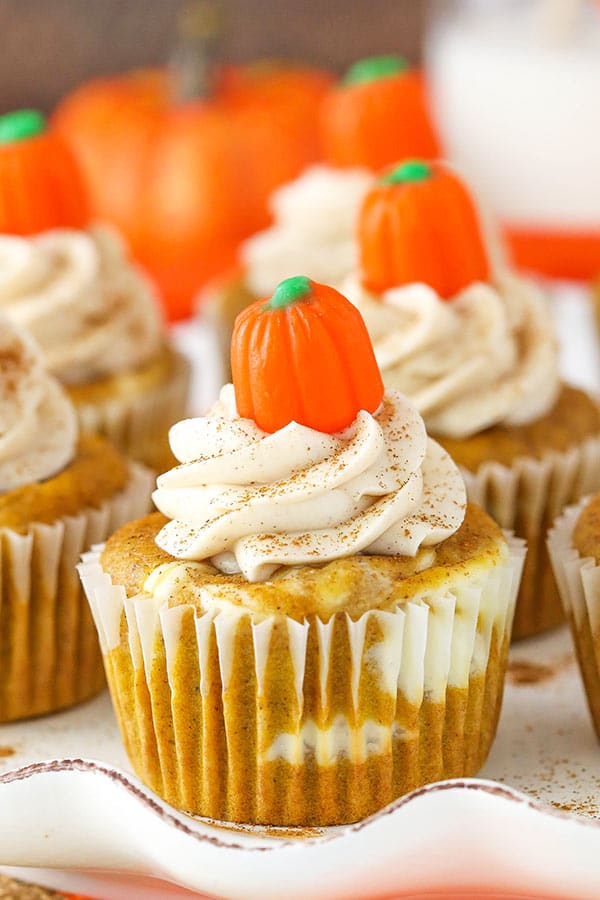 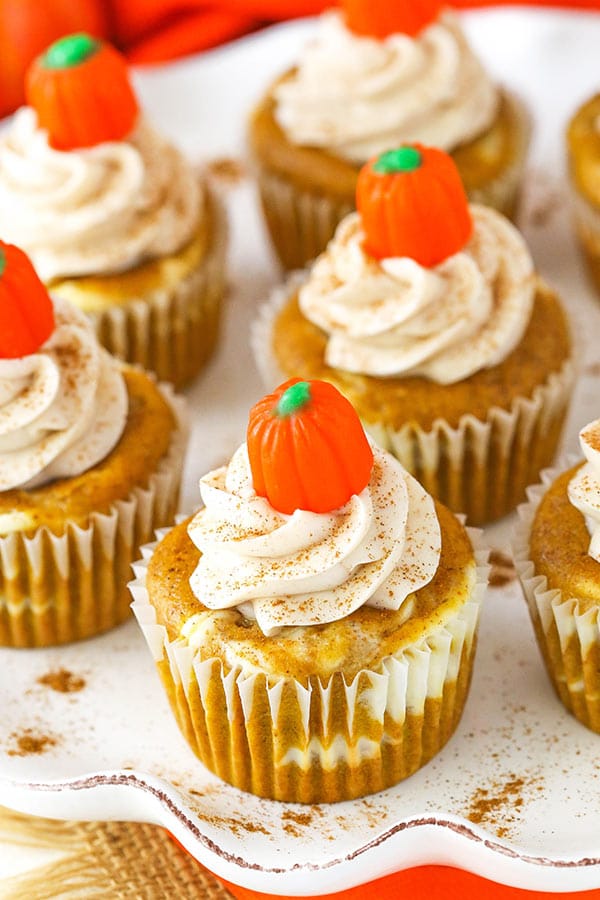 So lately I’ve been hooked on a new show. Summer’s are always kind of brutal for TV, so I turn to Netflix and such to get me through. One show that I know so many people love that I never even tried to watch was Grey’s Anatomy. I’m not sure why, it just had never appealed to me.

Well, summer tv got bad enough towards the end that I finally caved. I figured it’d be good to get me through to the start of the new seasons of everything. Now the joke’s on me because I’m totally hooked! All my shows are coming back on and I’m totally uninterested because I’m in love with Meredith and Derek. I’m now in season 8 and the only show I’m really willing to take a break from it for for is Outlander. The binging is real and totally a problem.

Speaking of binging, these cupcakes are totally bing-worthy as well. Not only is pumpkin one of the best parts of fall, they combine both cake and cheesecake into one – with such little effort! How could you resist? Why would you want to?! 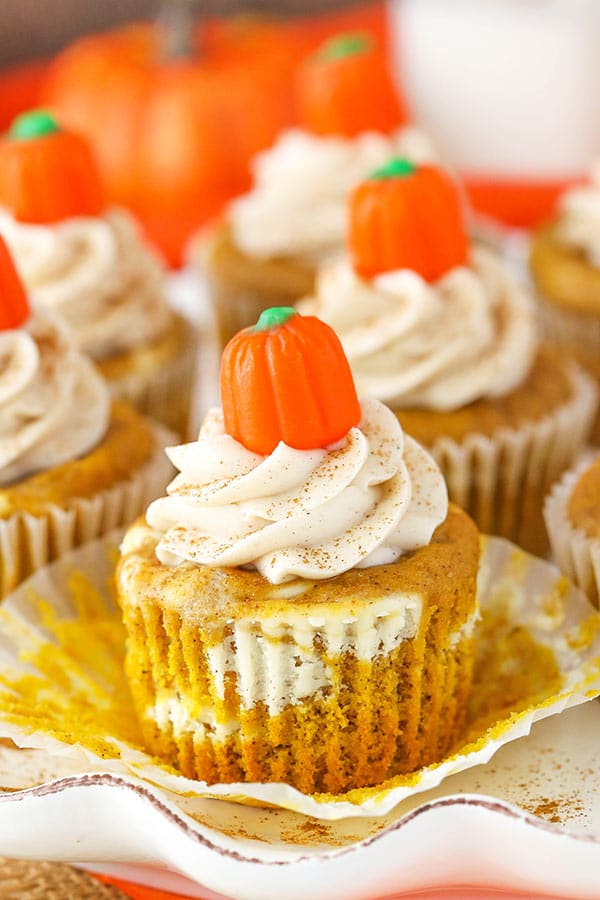 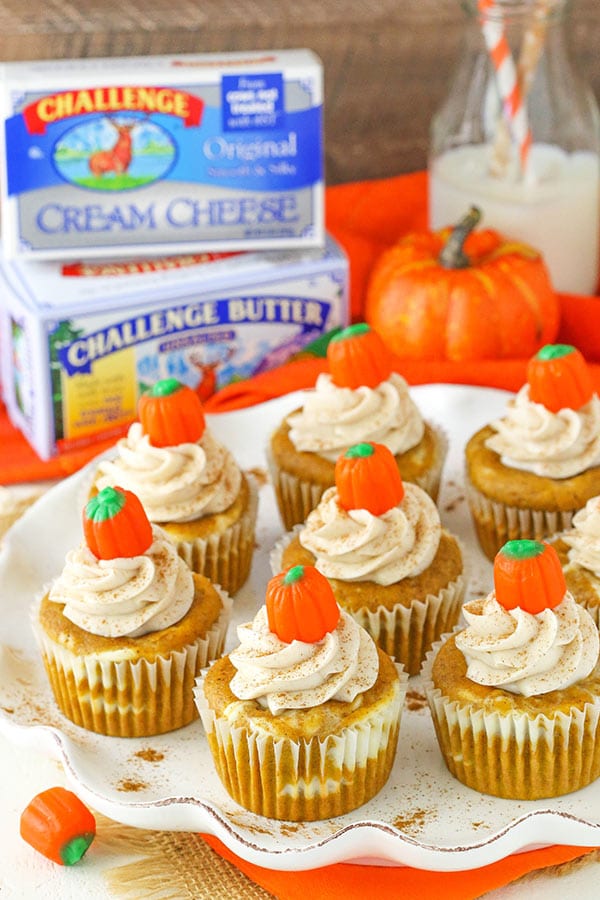 Of course these cupcakes use both Challenge Butter and Cream Cheese. They are both such great quality dairy products. The butter is 100% real cream and farm to fridge in two days. It really is so creamy! I always love that when I soften it to room temperature to bake with, I can really tell just how creamy it is and it stays that way, unlike other brands.

The Challenge Cream Cheese was also used in the classic cream cheese frosting on top. It’s as close to homemade as it gets with nothing artificial and no added hormones. I’m a big fan! The frosting itself is a simple classic with a touch of cinnamon to compliment the spices in the cupcake. I love the addition of it to the cupcakes! I used a little less frosting per cupcake than I normally do just because there’s so much awesomeness in the cupcake, I didn’t want the frosting to over power it.

The final cupcakes scream fall and are a such a great way to get your fix of two things – cake and cheesecake – all at once! They are fairly easy to put together and a great treat for sharing for the holidays! I hope you enjoy them as much as we did! 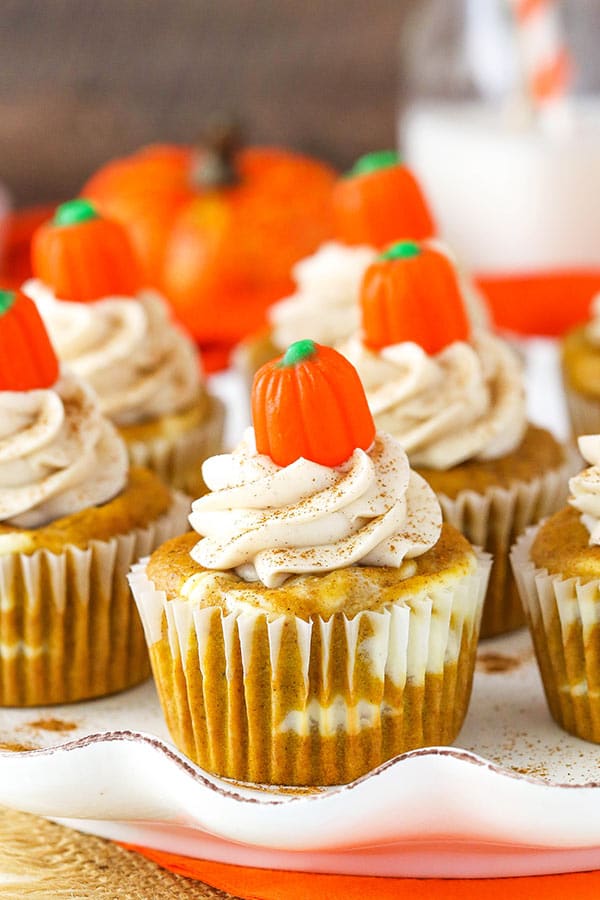 These Pumpkin Cheesecake Swirl Cupcakes are a fun combination of pumpkin cake and pumpkin cheesecake all in one easy-to-eat cupcake! Totally addicting!