This Pecan Pie is a classic! With a delicious pie crust, plenty of brown sugar and lots of pecans, you’ll come back to this recipe time and time again. 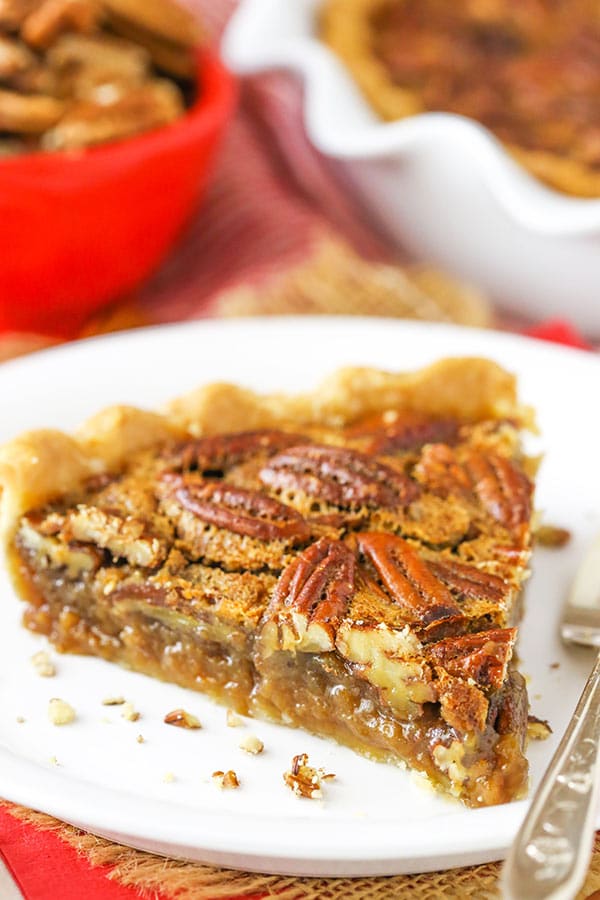 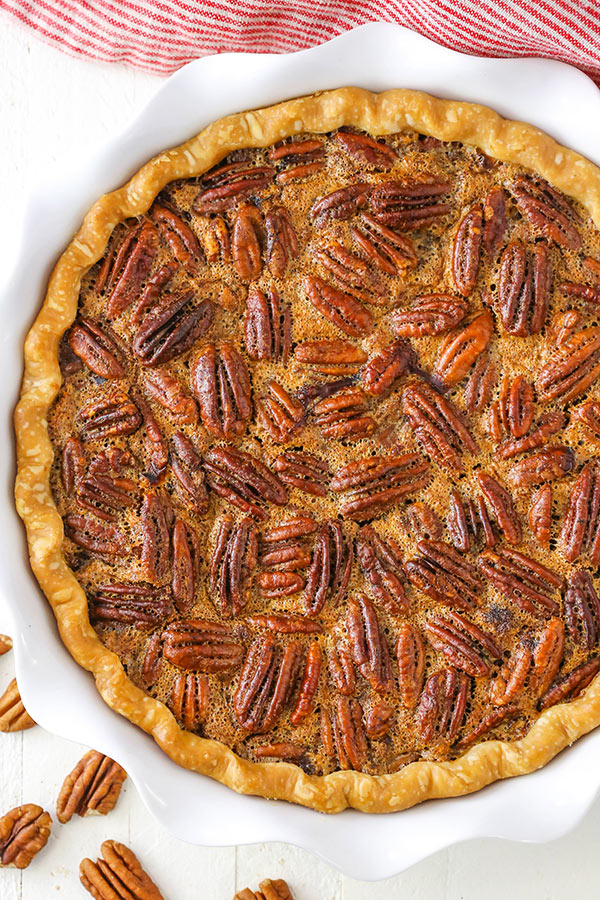 So yesterday felt like a bit of a milestone. I officially hit 24 weeks along in my pregnancy. You may remember from my blog post announcing that we are expecting twins that initially 24 weeks was a big day. Since the twins were initially MoMo twins (now they are MonoDi), I would have been hospitalized at 24 weeks for the remainder of my pregnancy. I’d be writing to you from the hospital right now!

Fortunately that didn’t end up needing to happen and I’m still at home. It has hit me a few times recently that this day was coming and it blows my mind how quickly it came. I was being positive about the hospitalization and we would’ve done what we needed to do, but my gosh what a relief we didn’t have to! Plus, 24 weeks is considered to be “the week of viability”. Not that it’s guaranteed at this point, but since we were in a tricky category before, this was the week that they’d admit me because the babies have a much greater chance of survival if something goes wrong and they have to take the babies. As someone who’s miscarried before, this feels like a wonderful milestone to hit, regardless of the situation.

And so far, everything has looked good. The babies don’t have any issues stemming from being MonoDi at this point and they are actually a little ahead in their growth. Yay! Since I now get to be home for Thanksgiving and Christmas, I plan on giving them plenty of good food to grow on. 😉 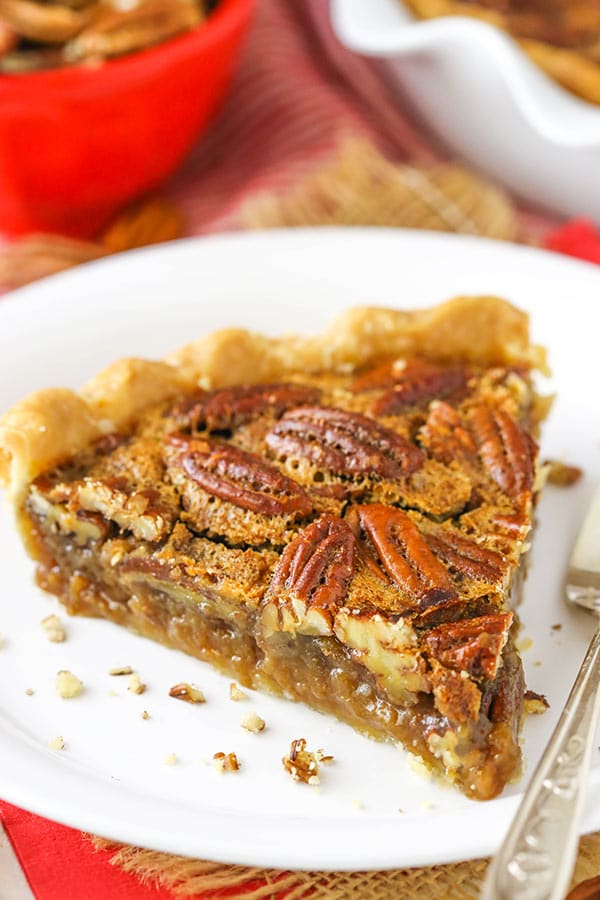 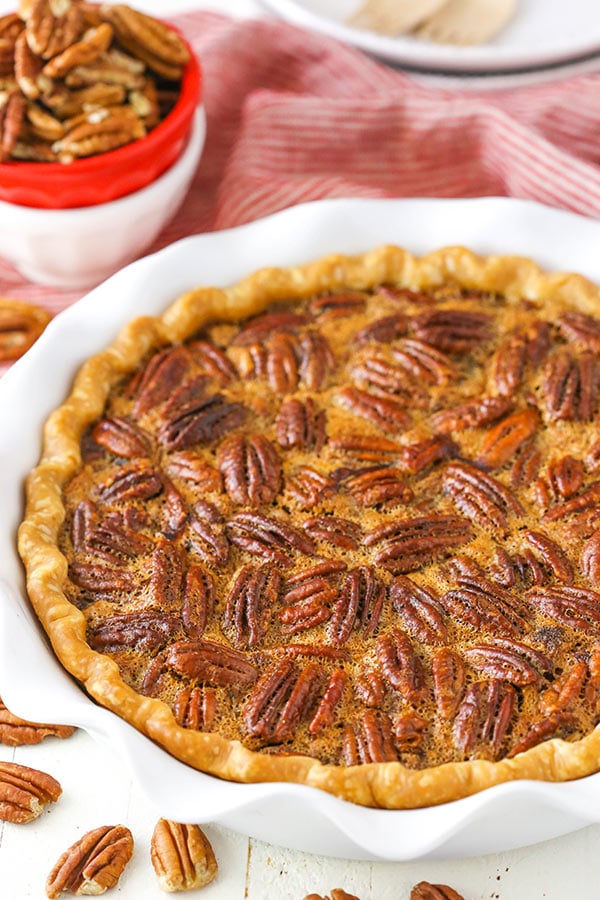 Of course this pie will definitely be on the list, along with some of my other favorites – Pumpkin Pie and Salted Honey Pie. They are all so good, I don’t think I could decide between them. And then there’s this Apple Crumb Cheesecake Pie. Ahh! Too many to decide. Since we’ll have plenty of family in town, I’m pretty sure I’m going to make all four and just enjoy. 😉

Of course pecan pie is a total classic. There’s really not a bad time to have pecan pie. And it’s SO easy to make! I’d say it’s just about fool proof. And I kept it simple this time around with a refrigerated pie crust. Spread the crust out into the pie pan and refrigerate it while you get everything else ready.

The great thing about the filling is that you truly just combine everything but the pecans. Some dark corn syrup and dark brown sugar to start. You could use the light version of both or either of them and it’ll bake up just fine, but I really prefer the deep flavor that the dark versions give this pie. If you can, use those. Then there’s a little vanilla, some butter and salt for flavor.

Add all the pecans to the bottom of the pie crust and pour the filling over the top of them. The pecans will float up to the top.

When baking the pie, it starts at a little higher temperature for a bit to help the crust set up and then it’s reduced to finish baking. Be sure to add a pie crust shield or add some foil around the crust about half way through, so your crust doesn’t get too browned.

The deep flavor of this pie with the crunchy pecans and the flaky crust is so good! We were big fans and I hope you’ll be too! 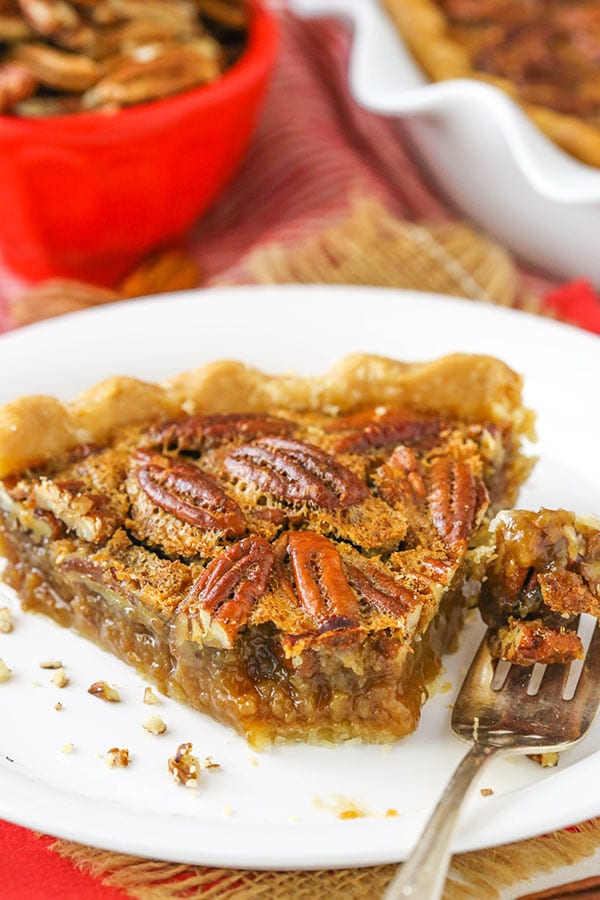 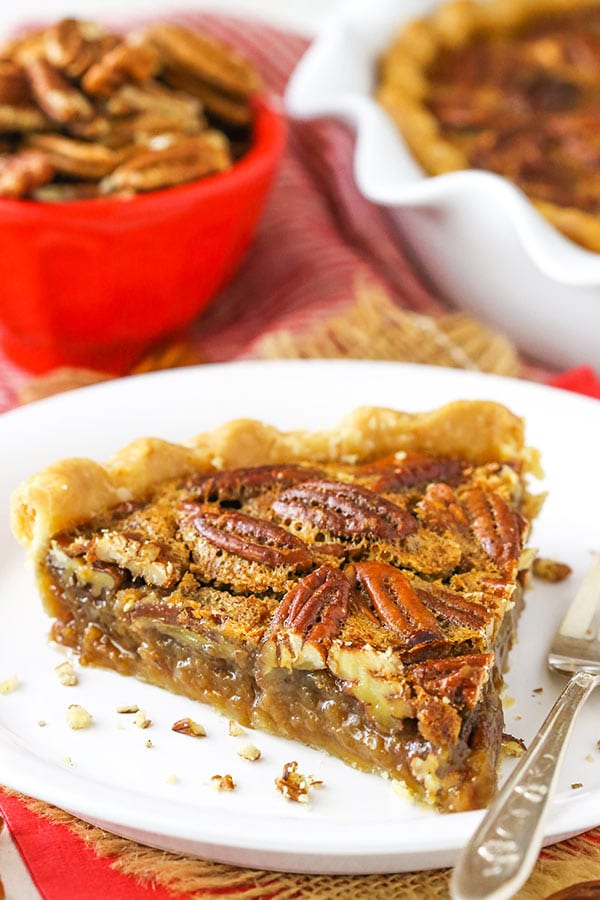 This Pecan Pie recipe is a classic! With a delicious pie crust, plenty of brown sugar & lots of pecans, you’ll come back to this recipe time and time again.

1. Place the pie crust in a 9 inch pie pan and crimp the edges. Put the crust in the fridge while you prepare the other ingredients. Preheat the oven to 425°F.
2. In a large bowl, whisk together the eggs, dark corn syrup, dark brown sugar, vanilla, butter and salt.
3. Put the pecans in the bottom of the crust in an even layer.
4. Pour the corn syrup mixture over the pecans, which will then float to the top.
5. Bake the pie for 10 minutes, then reduce the oven temperature to 350°F.
6. Bake for another 10 minutes, then add a pie crust shield (or aluminum foil) to keep the crust from browning too much.
7. Bake the pie for another 20 minutes.
8. When the pie is set around the edges and the center is set but still jiggly, remove the pie from the oven and set on a wire rack to cool for about 1 hour, then refrigerate until firm, 4-5 hours.
9. Pie can be made 1-2 days ahead and refrigerated until ready to serve.