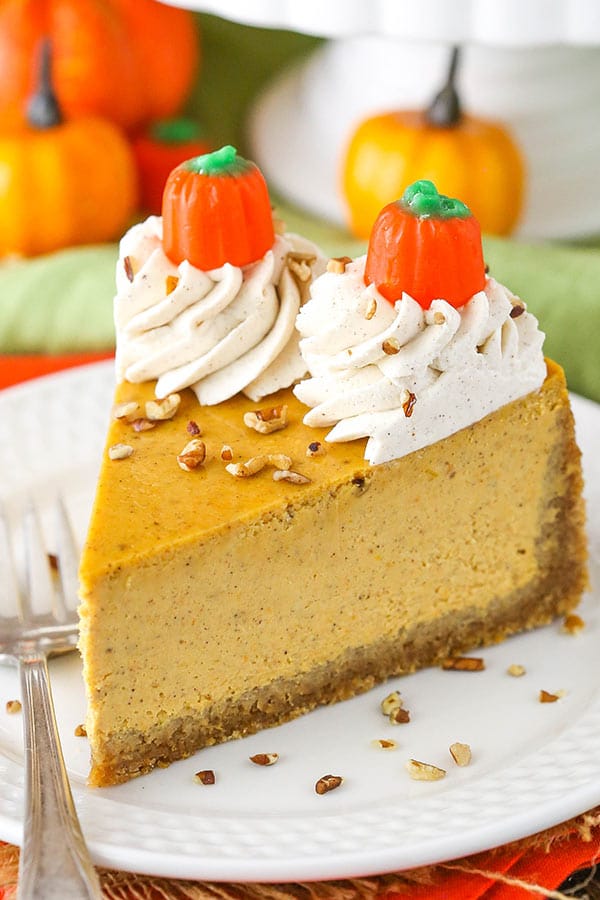 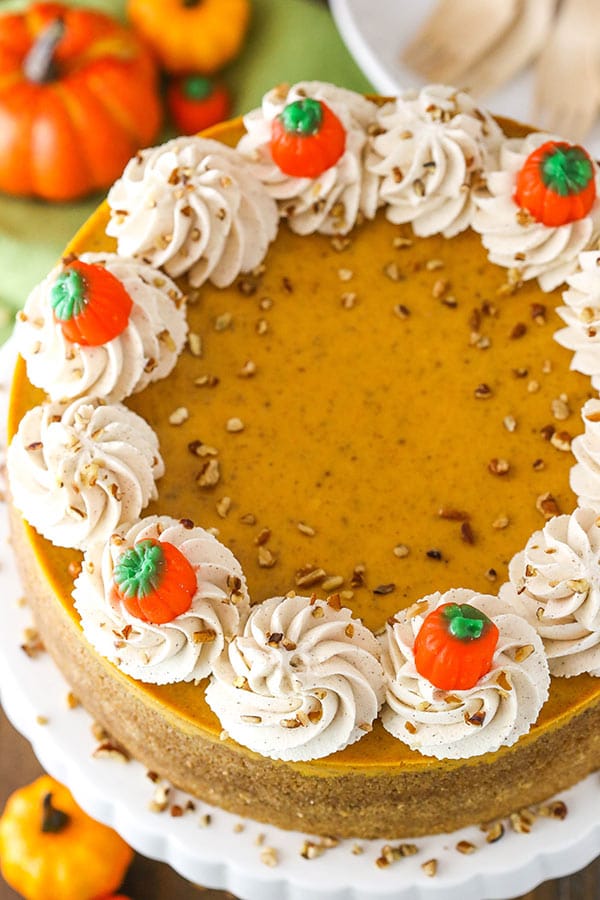 This past week we took the boys on their first beach trip. Packing for our first big vacation with them was a bit hilarious. I wouldn’t say we over packed for them because we certainly needed a lot of stuff. But the funny thing was that we were so busy packing for them, we realized after getting to the beach that we’d forgotten several things for ourselves. Of course they had everything they needed. 🙂

We played on the beach as much as the boys could handle, considering their young age. Ashton was more into the water, while Brooks preferred hanging in the sand. It was a great trip and it was fun to introduce the boys to Hilton Head Island – the beach I’ve been going to with my family since I was a child. I imagine many more family trips there in our future.

It was also a great way to end summer and say “hello” to fall! 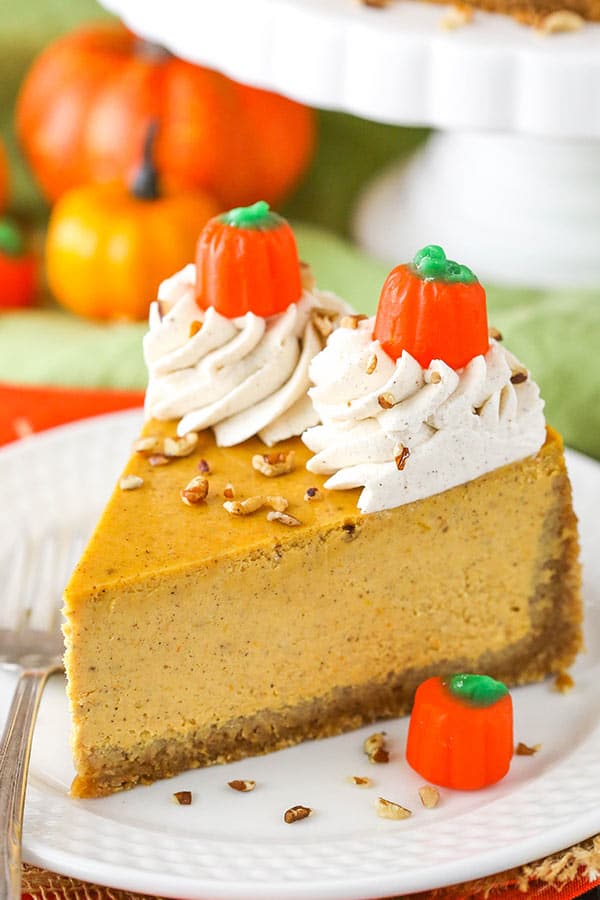 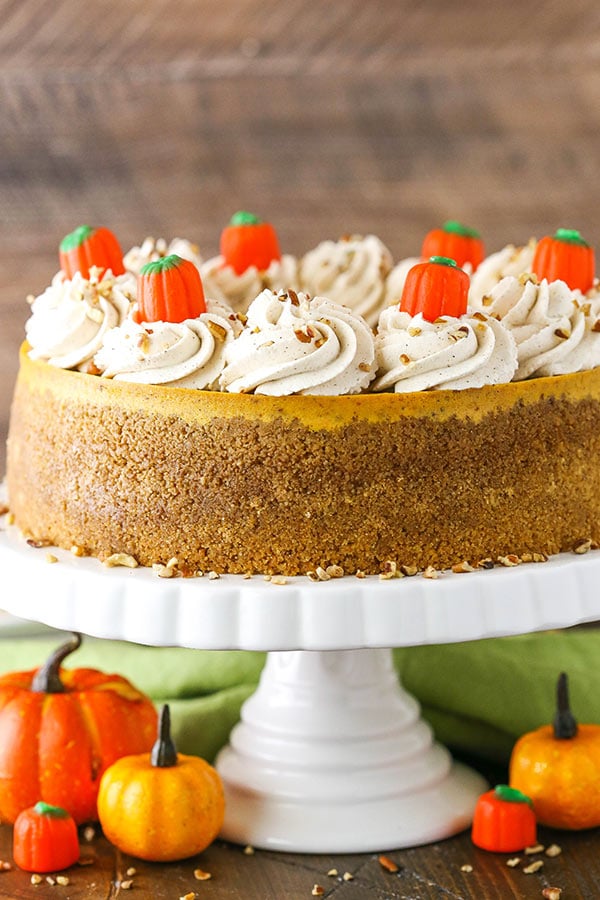 And since it’s officially fall, I’m so ready to start sharing some pumpkin desserts with you! Pumpkin is easily one of the best flavors of the season and it’s in great form in this pumpkin cheesecake. It’s loaded with a full can of pumpkin puree (not pumpkin pie filling) and lots of spices – cinnamon, nutmeg, ginger and cloves.

How to make a pumpkin cheesecake

To get started with this pumpkin cheesecake, you’ll make the crust. It’s a classic graham cracker crust – with a twist. There’s some brown sugar and cinnamon added to the crust, which gives it some extra flavor and really compliments the cheesecake.

The pumpkin cheesecake filling is thick and creamy and easy to put together. It starts with your usual suspects – cream cheese, sugar, a little flour and some sour cream. Add to that the pumpkin puree, spices and eggs and you’re filling is ready to go.

The important thing to remember when putting the filling together is that you want to mix things on a low speed. It helps to not incorporate too much air into the batter, which can rise to the top of the cheesecake during baking and cause cracks.

This cheesecake is baked in a water bath, which I know can be a pain, but really is the best way to go when baking a cheesecake. It lends a more moist cheesecake that doesn’t brown around the edges, sink in the middle or have cracks. It’s a few extra steps that are definitely worth it!

Once the cheesecake is baked and cooled, it’s topped with cream cheese whipped cream that pairs perfectly. The final cheesecake is so good that it just melts in your mouth. I love all the pumpkin flavor and how well it’s accentuated by the spices. There’s lots of spice, but not too much. Just how I like it. 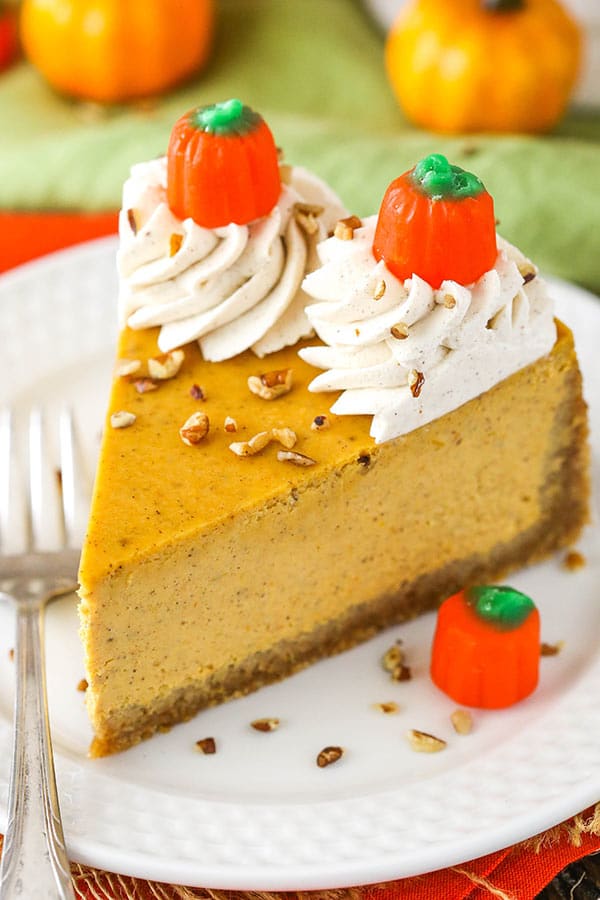 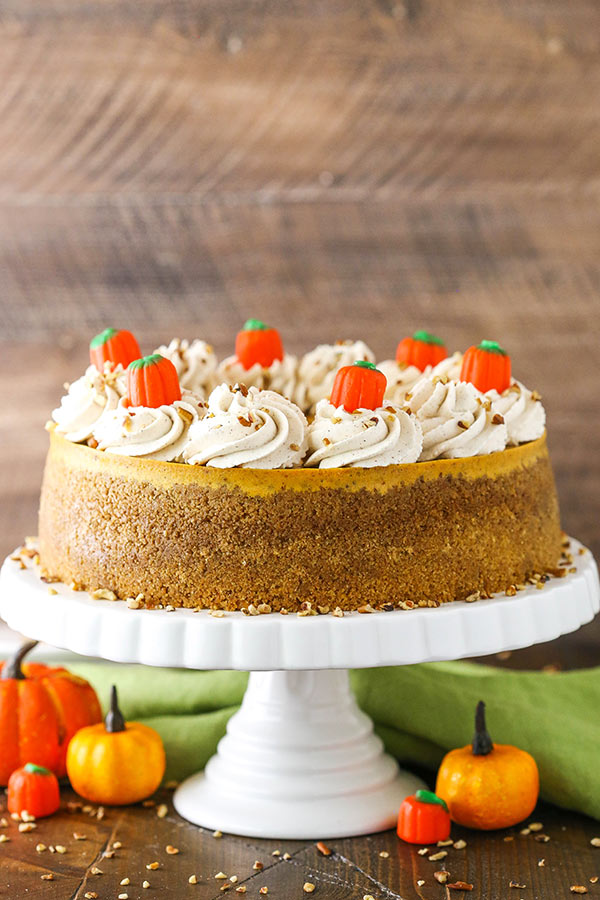 For the Graham Cracker Crust

For the Spiced Pumpkin Cheesecake Filling

For the Whipped Cream Cheese Frosting