This post is sponsored by Monk Fruit In The Raw®, but all opinions are my own. 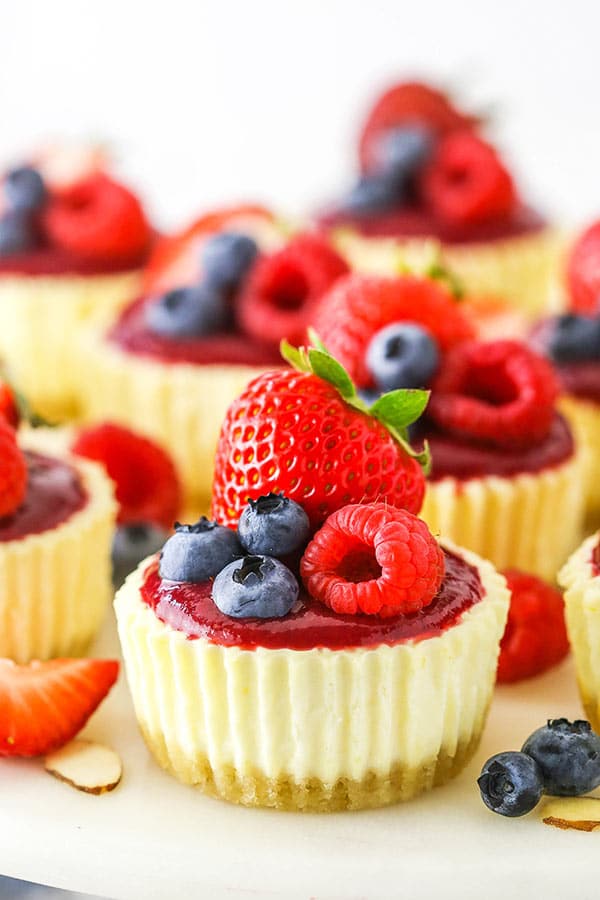 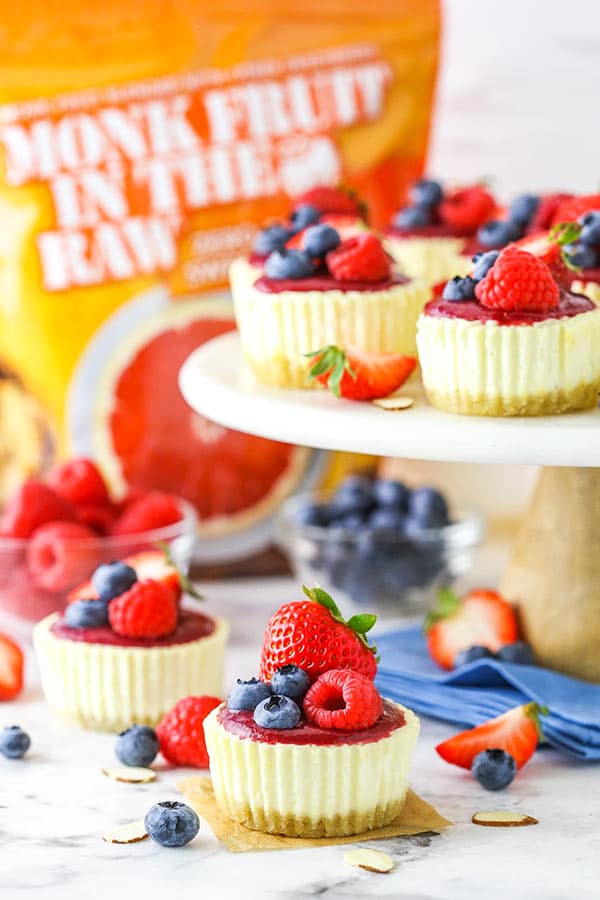 Labor Day is this weekend, which means it’s time to soak up the remaining bit of summer that’s left. It’s also a great time to get together for potlucks and maybe even enjoy some time around a pool, beach or lake. We’ve tried the lake with the boys recently and it’s not their favorite thing yet, so we’ll probably be sticking with the pool.

However you choose to celebrate, there’s naturally going to be good food involved. I have to say that these Mini Berry Almond Cheesecakes would make a delicious and festive addition to your celebration! From the natural red, white and blue they incorporate to the cute mini size, they are perfect for a potluck and for sharing!

And as mentioned before, they are pretty much guilt-free. As you may have read in other recent posts, I’ve been eating very low carb lately so these mini cheesecakes are perfect! They use Monk Fruit In The Raw for sweetness, so you don’t have to worry about added sugar either. 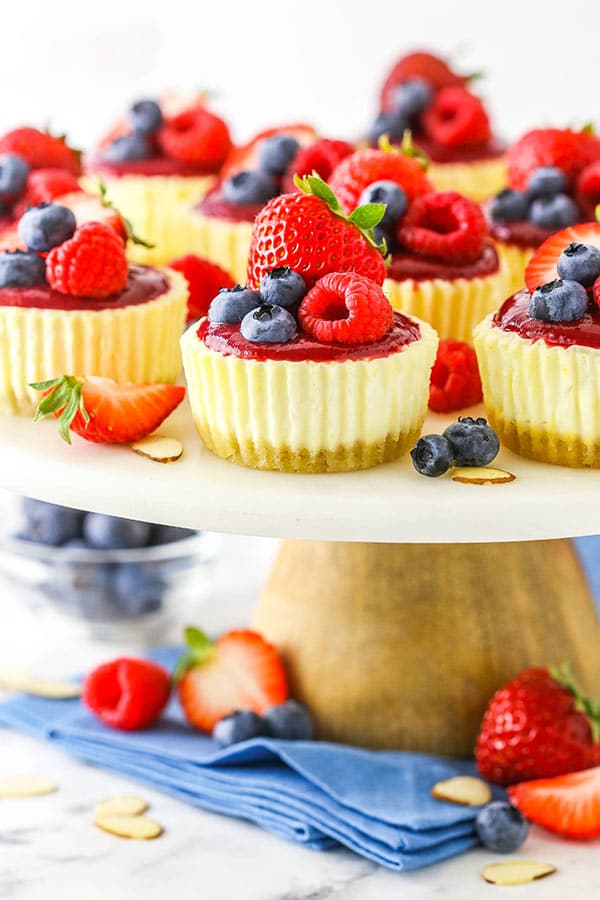 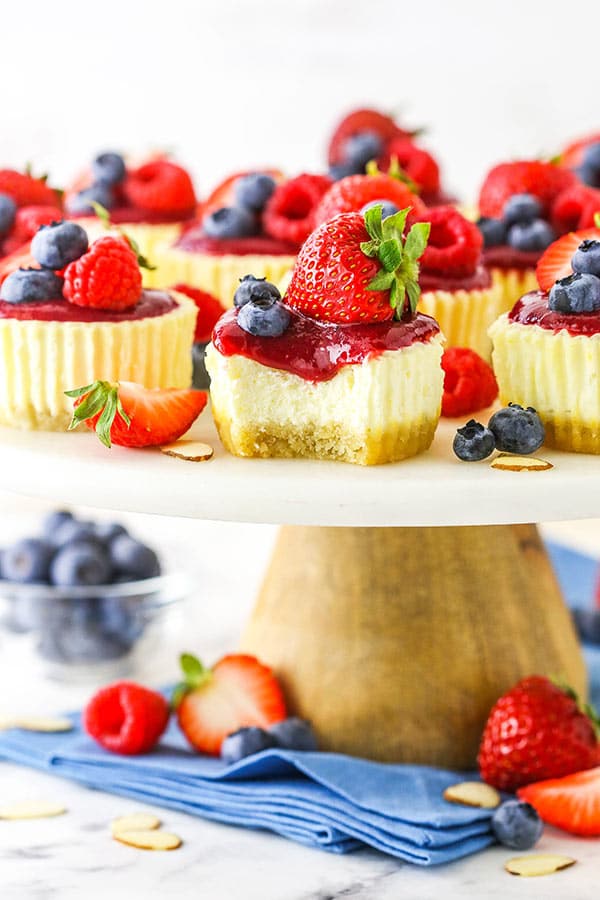 To get started with these cheesecakes, you’ll make the mixed berry topping. Normally I’d use some sugar for sweetness and cornstarch to thicken a topping like this, but in the interest of keeping things guilt-free I changed it up.

Instead of sugar, I used Monk Fruit In The Raw, which is a zero-calorie sweetener made from vine-ripened monk fruit, native to Southeast Asia. It has a super light texture and can be used in any baked good or beverage, measured cup for cup like sugar. It’s great for those looking to cut added sugar and for those with diabetes who use sugar substitutes. And – bonus – it’s naturally gluten free! You can find it in the bakery isle of your grocery store as either a bakers bag or as packets.

I added a couple tablespoons of Monk Fruit In The Raw to the berry mixture. I recommend adding it and then tasting it to see if you’d like to sweeten it a little more.

As for the cornstarch, I just left it out completely. Rather than thicken the topping with cornstarch, it’s reduced over the stove by half. This thickens it and keeps the topping gluten free and low carb. It turns out so nicely and has amazing flavor! Love it! 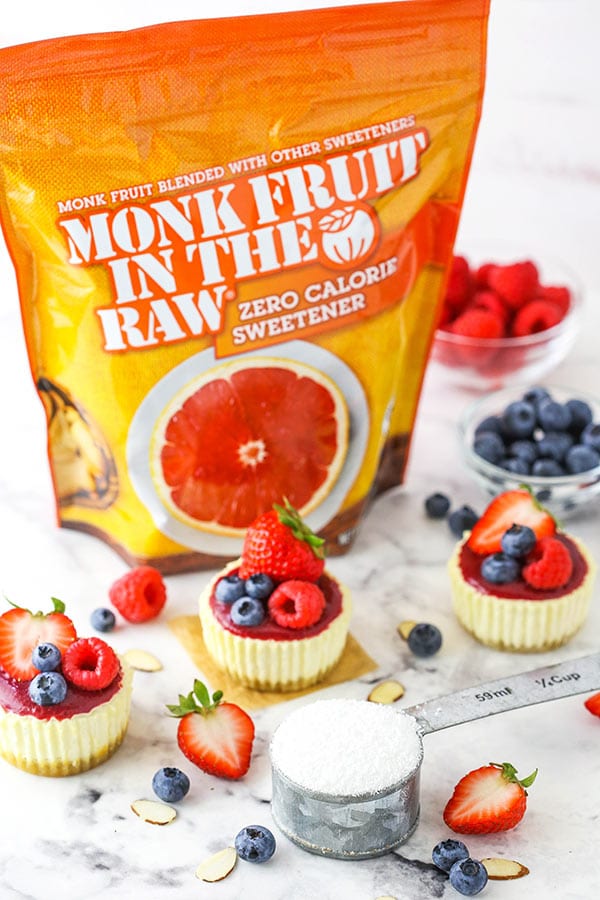 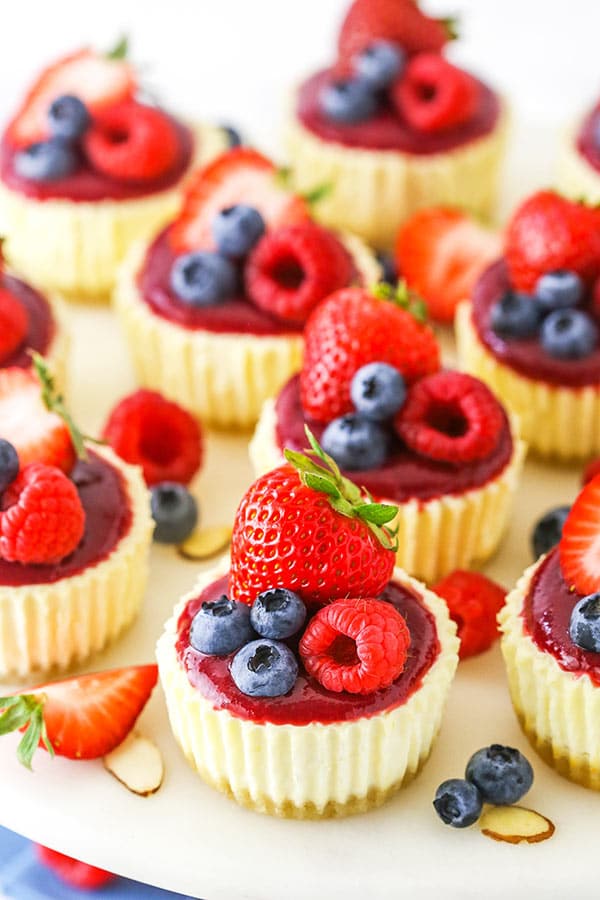 Instead of my more typical graham cracker crust, I went with a crust made with almond flour. The process is pretty much the same though. You’ll combine the almond flour with some Monk Fruit In The Raw, then stir in some melted butter and a little vanilla extract.

The mixture is then divided and pressed into cupcake liners and baked for about 5 minutes. It makes a perfect little crust with a nice, light flavor.

From there, you’ll make the cheesecake filling. Again, we’re going to grab our Monk Fruit In The Raw to sweeten it and combine it with our cream cheese. Next, add in some sour cream and almond extract. Finally, the eggs are added one at a time. Be sure to mix things on low speed to keep from incorporating too much air into the batter. 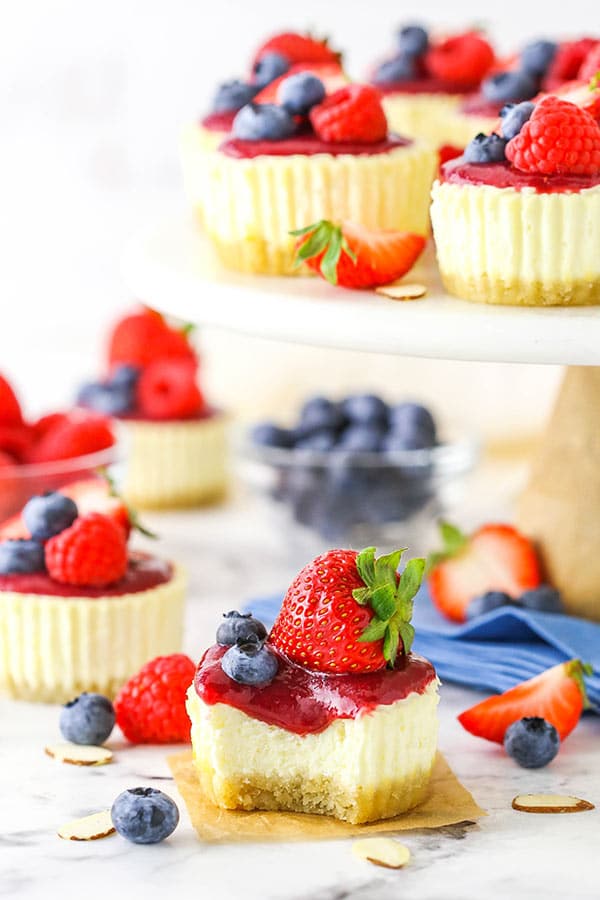 Refrigerate the cheesecakes until they are cold and firm, then top them with the cooled berry topping and some fresh berries. They make the cutest presentation! As indulgent and yummy as they look, you can feel good about eating them! I’m excited to make them again and pop them in the freezer individually. They’ll thaw well in the fridge so I can pull one out as I want a great little treat! I hope you enjoy them too!

For more information about Monk Fruit In The Raw and to convert existing recipes, check out their site!

1. To make the mixed berry topping, add the berries to a food processor and puree until smooth then strain. You should end up with about 1 1/2 cups of puree.
2. Combine the berry puree and Monk Fruit In The Raw in a medium saucepan. Cook over medium-low heat, stirring consistently as the mixture thickens and cooks down. Cook until reduced by half, so that you end up with about 3/4 cup. To see if it’s done, pour the mixture into a measuring cup. If it’s reduced to 1 cup, it’s done. If not, add it back to the pan and keep cooking.
3. When done, pour the berry mixture into another bowl, then refrigerate and allow to cool completely.
4. To make the crusts, preheat oven to 350°F. Add cupcake liners to a cupcake pan and spray them with non-stick spray.
5. In a medium sized mixing bowl, combine the almond flour and the Monk Fruit In The Raw.
6. Add the melted butter and mix until well combined.
7. Divide the mixture evenly between the 12 cupcake liners. Use your fingers or the bottom of a cup or something similar to evenly press the mixture down.
8. Bake the crusts for 5 minutes, then set aside to cool.
9. To make the filling, reduce oven to 300°F (148°C). In a large bowl, mix the cream cheese and Monk Fruit In The Raw on low speed until well combined. Scrape down the sides of the bowl.
10. Add the sour cream and almond extract. Beat on low speed until well combined.
11. Add the eggs one at a time, beating slowly and scraping the sides of the bowl after each addition.
12. Divide the cheesecake batter evenly between the cups in the pan. The cups should be mostly full.
13. Bake the cheesecakes for 15 minutes, then turn off the oven and leave the door closed for another 8-10 minutes.
14. Crack the oven door and allow cheesecakes to cool for 15-20 minutes, then put in the fridge to finish cooling. The cheesecakes will puff up a little while baking, then fall as they cool. If they look a little wrinkled on top, that’s ok.
15. When cheesecakes are cool and firm, remove them from the pan.
16. Top each mini cheesecake with about one tablespoon of the berry mixture, then top it with some fresh fruit.
17. Cheesecakes are best when stored well covered in the fridge for 3-4 days.