This Raspberry Almond Layer Cake has three layers of moist, fluffy almond cake filled with fresh raspberry frosting. It’s such a pretty cake and it tastes even better than it looks! 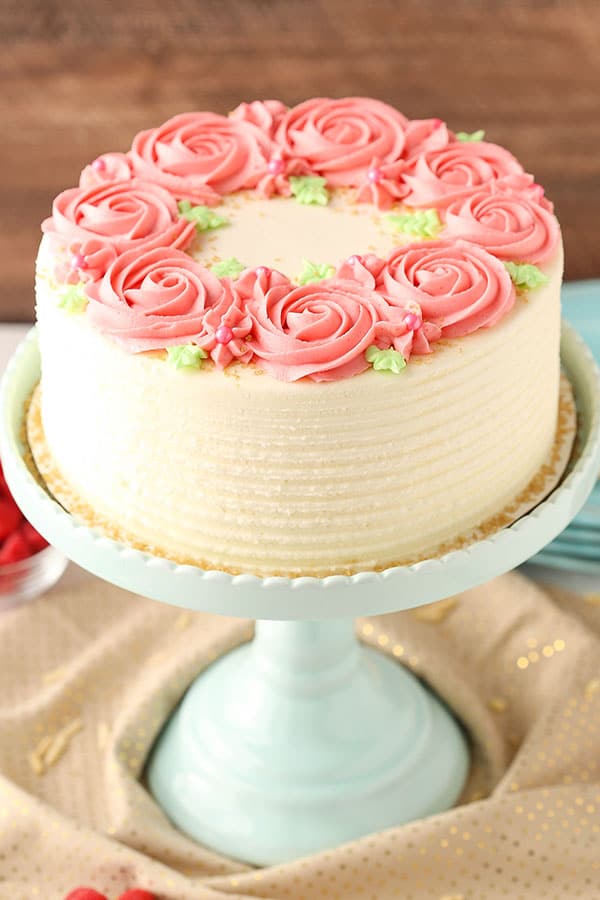 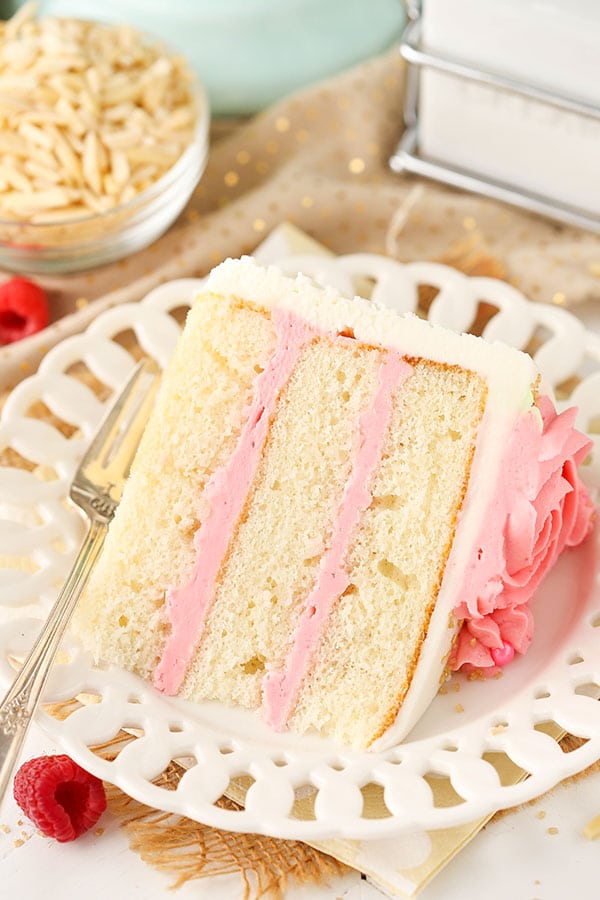 So there was a moment this past weekend where I realized what true love really is. It’s giving your spouse the “best” pillow even when you want it. Let me explain.

We were visiting my parents and therefore not using our usual pillows. The first night, we just grabbed the pillow that had been on our side of the bed and went to sleep. Yes, I noticed that his was softer and fluffier than mine, but I wasn’t going to steal it from him. I want him to be comfortable and I can deal with the less fluffy pillow – no problem.

Well then the next night, all of a sudden – through the dark – the hubs lets out a heavy sigh and says, “Do you like your pillow?”

“Well mine is too fluffy, it’s hurting my neck. I didn’t want to say anything because I thought you wanted the pillow you have,” he says.

To which I laughed, because I of course I hadn’t said anything figuring he’d wanted the fluffy one. 🙂

So we switched and were both happy. But the point is that we had initially given up the pillow we wanted for the comfort of the other. See? True love. 😉 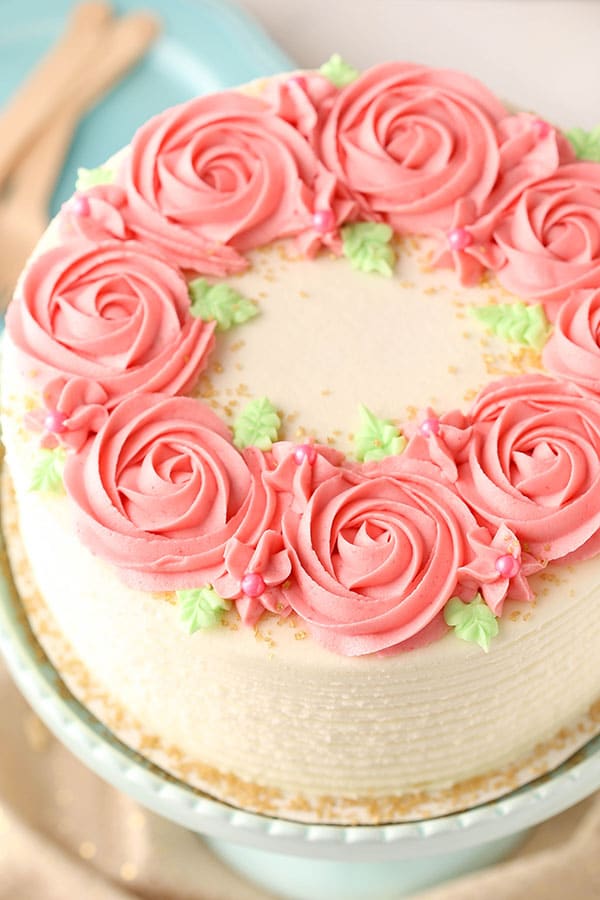 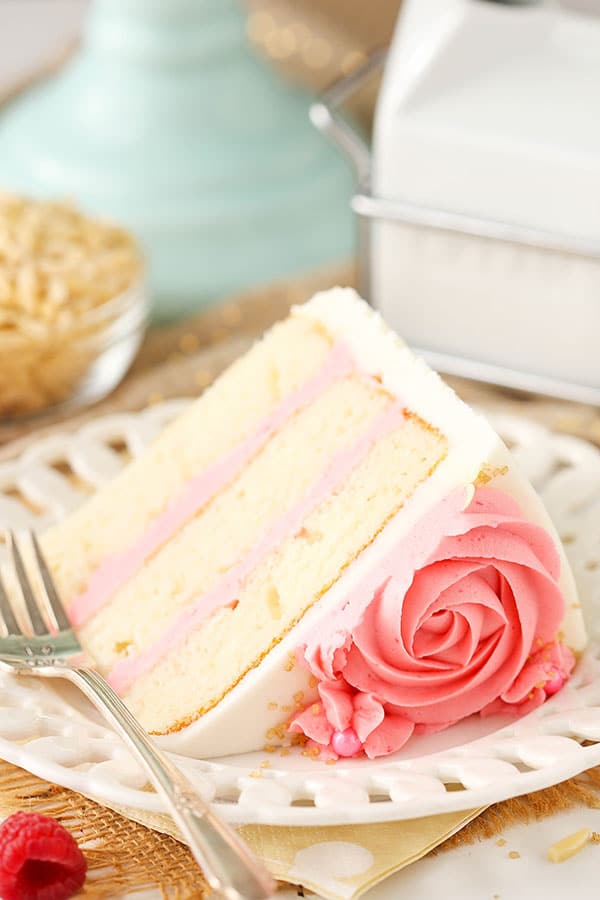 Speaking of true love, I’m in LOVE with this cake! I feel like it just looks like a cake you’d make for someone you love too. Those flowers!! I can’t even handle it.

The cake starts out with three layers of moist, fluffy almond cake. I feel like almond doesn’t get enough credit for how awesome it is. Vanilla tends to capture hearts, but almond deserves that spot too. It’s one of those flavors that gets me every time I have it. I’ll sometimes forget just how delicious it is and then it reminds me when I bite into it. So good!

How to Make a Raspberry Almond Layer Cake

The first step to a wonderfully fluffy cake is to fully cream the butter and sugar. You don’t want to skimp on this. The butter and sugar will come together and look lighter in color and have a thick and fluffy texture. It’s pretty cool. You’ll know it when you see it. 🙂

Once the cakes are made, you’ll make the two frostings. I’ve got raspberry frosting in between the layers and on top as decorations. Then the almond frosting is on the outside of the cake. 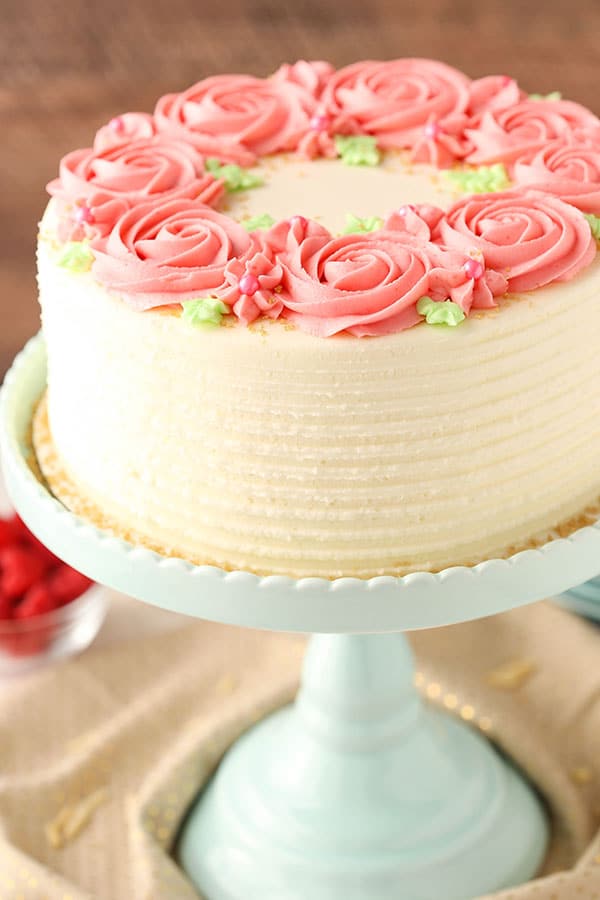 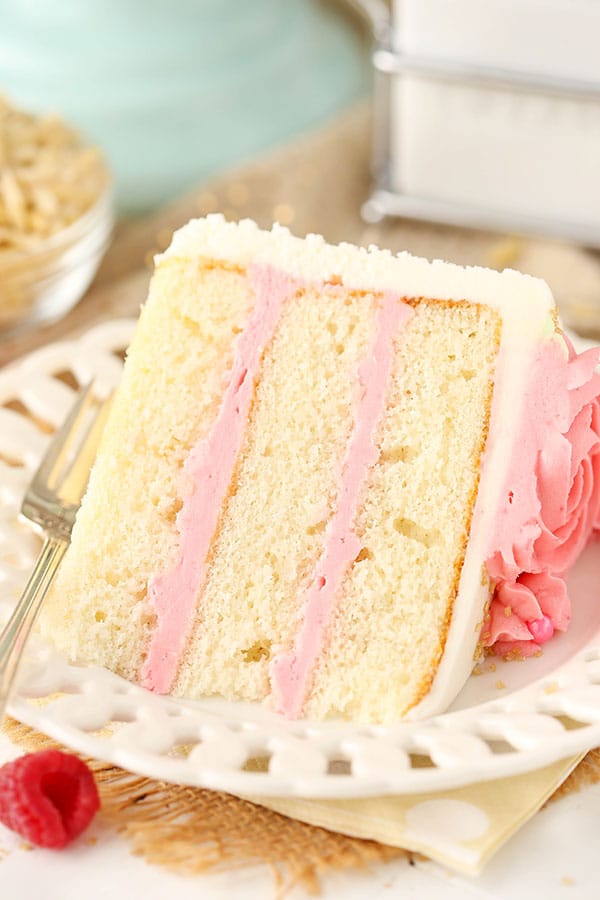 The raspberry frosting gets its pink color entirely from fresh raspberries. How awesome is that?! To ensure an uninterrupted shade of pink, I puree the raspberries in my food processor and then press the puree through a fine mesh sieve to remove the seeds. When added to the frosting, it’s a pure, beautiful shade of pink!

The roses on top are made with a closed star tip – I used the Ateco 844, but the Wilton 1M or 2D would work as well. I colored some of the remaining almond frosting with some green to add a few leaves as well.

This cake was a BIG hit! Everyone loved it! Not only is it fun to check out the pretty flowers, but the almond and raspberry together are so light and refreshing! It really is the perfect combo! 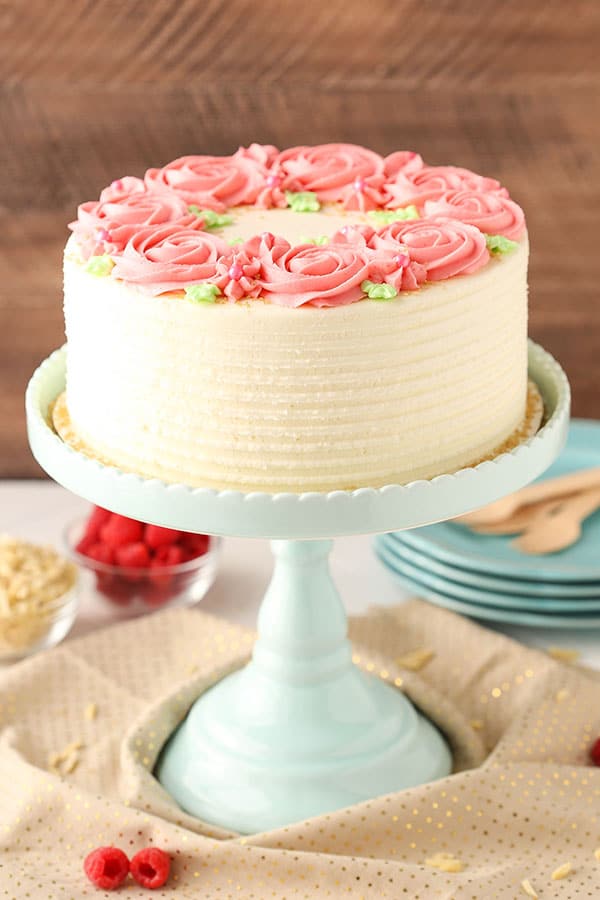 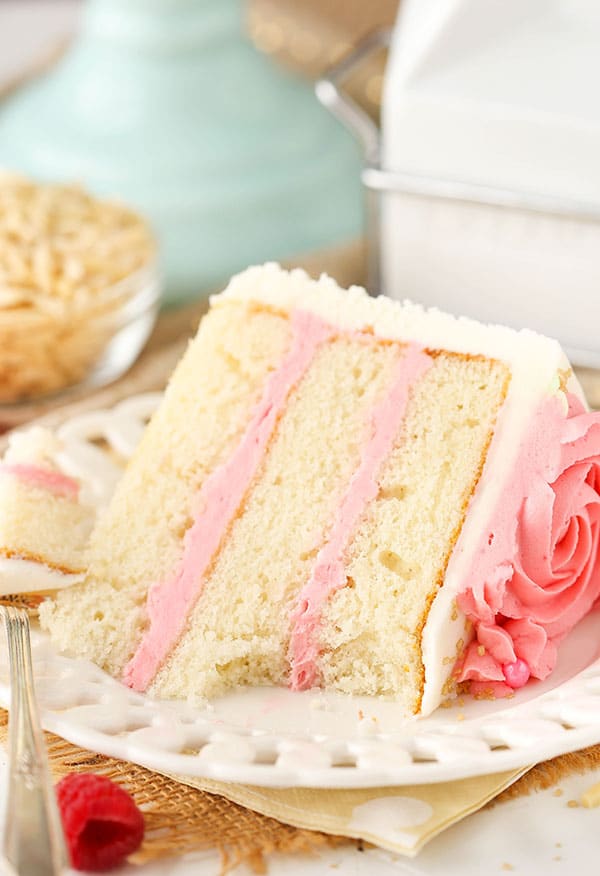 This Raspberry Almond Layer Cake has three layers of moist, fluffy almond cake filled with fresh raspberry frosting. It’s such a pretty cake and it tastes even better than it looks!

TO MAKE THE FROSTINGS:

15. To put the cake together, use a large serrated knife to remove the domes from the top of the cakes so that they’re flat. Place the first cake on a serving plate or a cardboard cake round.
16. Spread about 1 cup of raspberry frosting evenly on top of the cake.
17. Add the second layer of cake and another cup of raspberry frosting.
18. Top the cake with the remaining layer and frost the cake with the almond frosting. Refer to my tutorial for frosting a smooth cake, if needed. Once frosted, use the patterned side of an icing smoother/comb and create the patterned lines on the sides.
19. Use the remaining raspberry frosting to pipe rosettes around the edge of the cake. I used Ateco tip 844, but Wilton 1M or 2D would work as well.
20. Color some of the remaining almond frosting green and use it to add some leaves. Sprinkle the cake with some gold sprinkles, if desired.