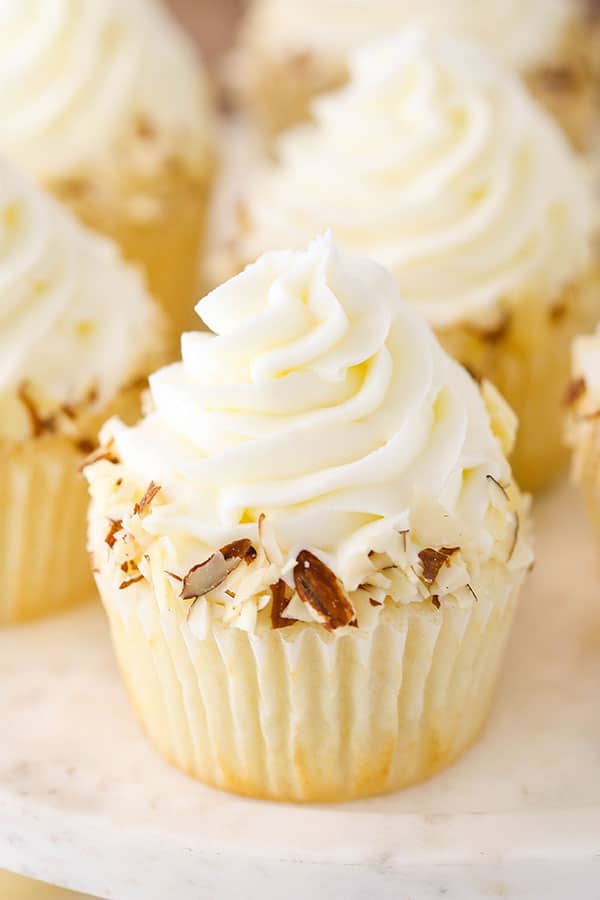 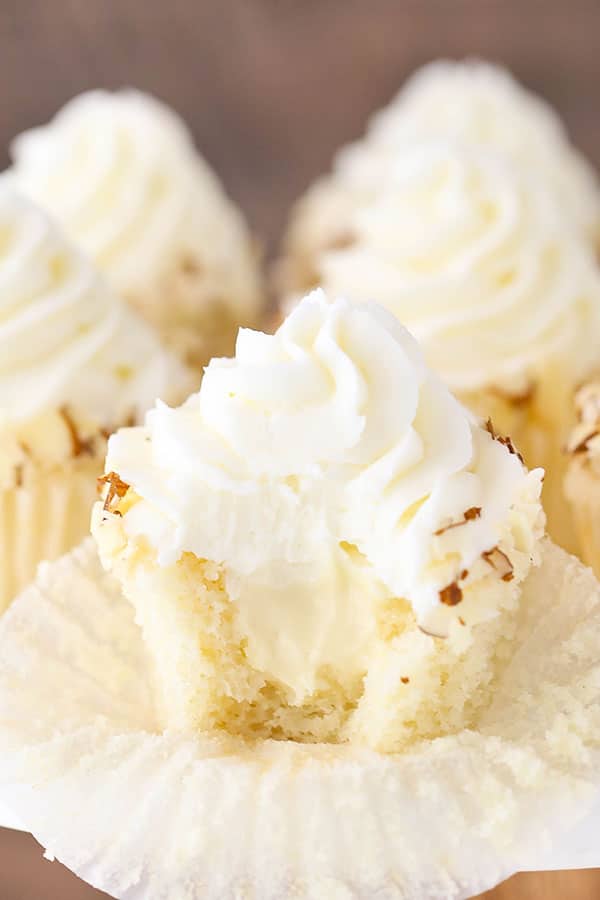 So Christmas Eve night, something rare happened. The hubs baked with me! It was sort of unintentional. We’d gotten into bed and were ready to go to sleep, but then all of a sudden I realized I’d forgotten to put together the overnight breakfast casseroles for Christmas morning. I’d prepped some things, but they still had to actually be put together. When I told the hubs, he got up with me to help so it went faster.

“Wait, what’s this?” he said, pointing at the recipe.

“Crap. I added too much cinnamon and vanilla.”

He’d added 2 tablespoons instead of 2 teaspoons. Quite a difference. 🙂 Fortunately, it’s hard to mess up a birthday cake french toast casserole. The more cinnamon and vanilla, the more better. We had a good laugh and rolled with it.

It still turned out great, but you’ll be happy to know he wasn’t in the kitchen when I put these cupcakes together. You never know what could’ve happened. 😉 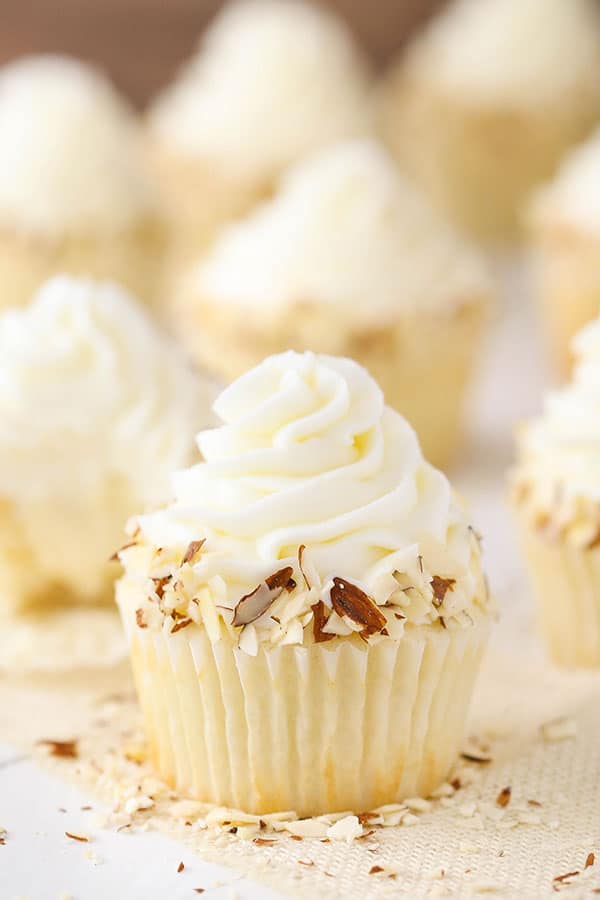 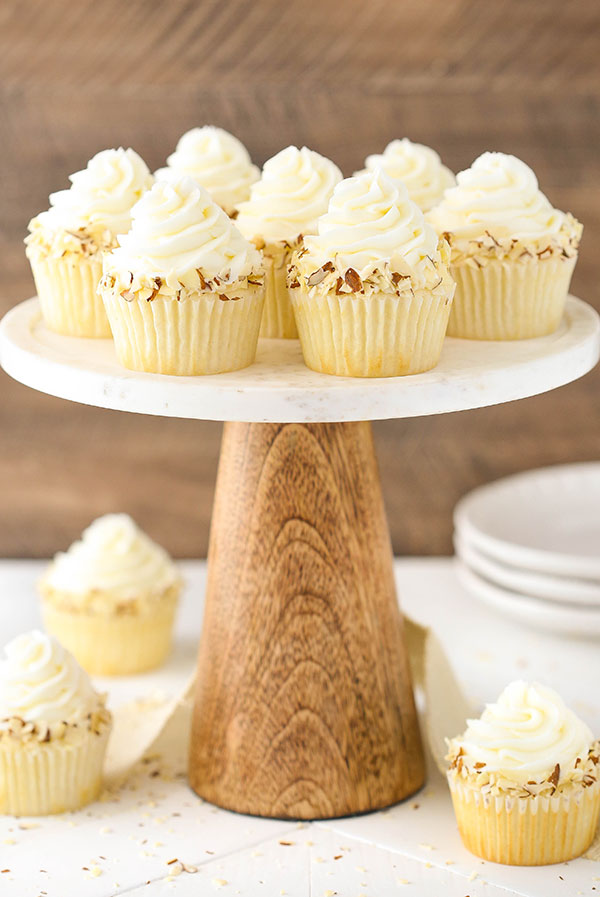 These cupcakes are seriously delicious and were made by request. The base cupcake is moist and fluffy and uses almond extract for the flavor. The first step of the process of making the batter is the most important – the creaming. Be sure to fully cream the butter and sugar together until it’s lighter in color and fluffy in texture. You’ll be able to see it change. It adds air to the batter that gives the cupcake it’s fluff.

The frosting is a classic american buttercream, also flavored with almond extract. If you’re feeling the amaretto though, you could totally add some of that in there too, in place of the water or milk. I like to use a combination of butter and shortening in the frosting. I prefer the texture and flavor and it stays firmer at room temperature, but if you would prefer all butter you can just replace the shortening with additional butter.

The filling is flavored with amaretto, an almond flavored liqueur. It’s a whipped white chocolate ganache that’s so light and perfect with the cupcake! To make the ganache, heat the heavy whipping cream and amaretto, then pour it over the white chocolate chips. Whisk them together until smooth, then refrigerate until it has firmed up. It will still be a little soft, but firm. Add the ganache to a mixer and bowl fitted with the whisk attachment and whip until soft peaks form, about 5-7 minutes. You’ll notice the color of the ganache lighten. It’s light, fluffy and SO good!

The final cupcake is delightful! It’s so light and yummy, with great almond flavor! I could just about eat all of them in one sitting. 🙂 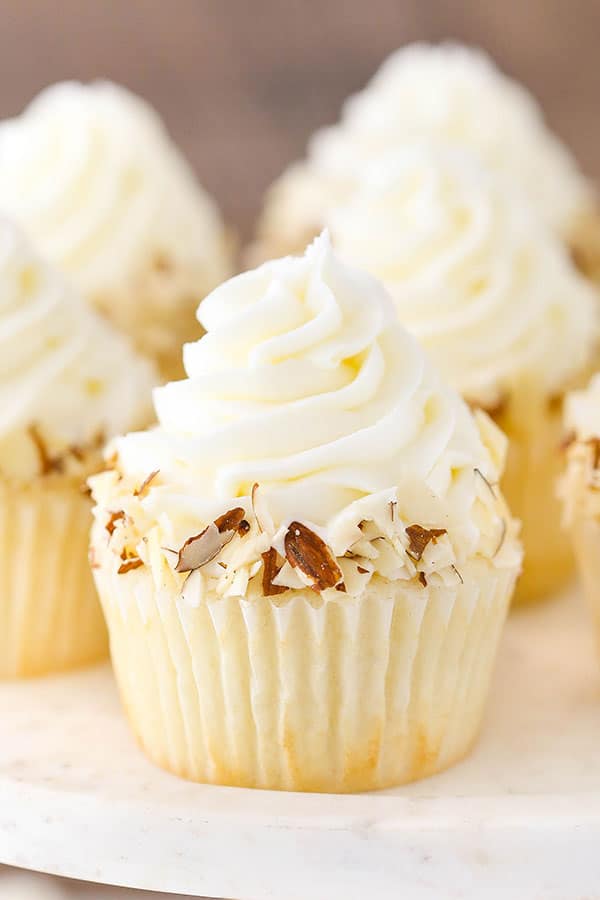 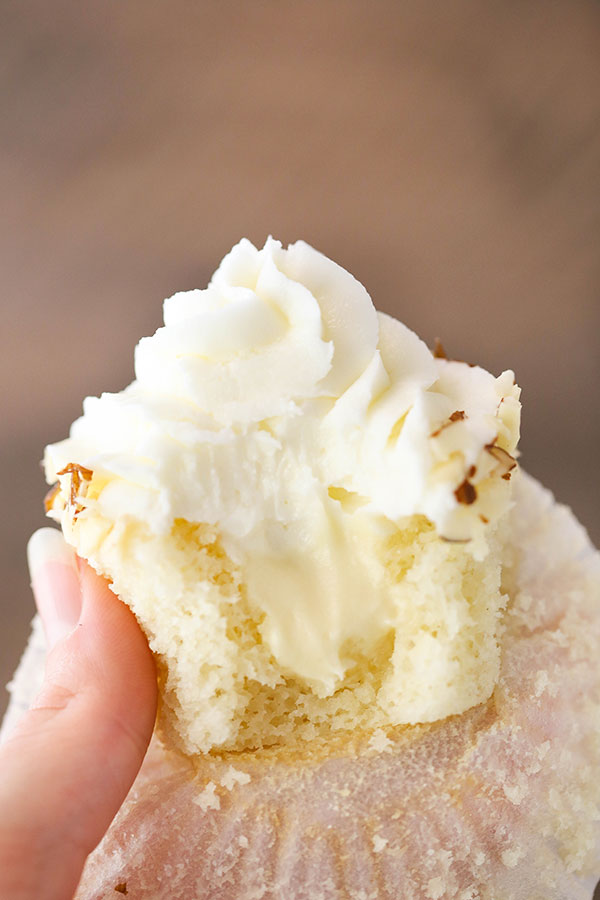 1. To make the ganache, put the white chocolate chips in a medium sized bowl.
2. Put the amaretto and heavy whipping cream in a microwave safe measuring cup or bowl and microwave until it begins to boil.
3. Pour the cream over the white chocolate chips and allow to sit for 2-3 minutes, then whisk until smooth. If needed, microwave the mixture for 10-20 more seconds, then whisk until smooth.
4. Set the ganache in the fridge to firm up, about 2-3 hours.
5. To make the cupcakes, preheat oven to 350°F (176°C) and prepare a cupcake pan with cupcake liners.
6. In a large mixing bowl, cream butter and sugar together until light in color and fluffy, about 3-4 minutes. Do not skimp on the amount of creaming time.
7. Add sour cream and almond extract and mix until well combined.
8. Add egg whites in two batches, mixing until well combined after each. Scrape down the sides of the bowl as needed to be sure all ingredients are well incorporated.
9. Combine dry ingredients in a separate bowl, then combine the milk and water in a small measuring cup.
10. Add half of the dry ingredients to the batter and mix until well combined. Add the milk mixture and mix until well combined. Add remaining dry ingredients and mix until well combined. Scrape down the sides of the bowl as needed to be sure all ingredients are well incorporated.
11. Fill the cupcake liners about halfway. Bake for 15-17 minutes, or until a toothpick inserted comes out with a few crumbs.
12. Remove cupcakes from oven and allow to cool for 2-3 minutes, then remove to cooling rack to finish cooling.
13. While the cupcakes cool, finish the ganache. Put the ganache in the bowl of a mixer and whip with the whisk attachment until soft peaks form, about 5-7 minutes. You’ll notice the ganache lighten in color.
14. Cut out the centers of the cupcakes. You can use a cupcake corer or a knife.
15. Fill the centers of the cupcakes with the white chocolate ganache. Set the cupcakes in the fridge while you make the frosting.
16. To make the frosting, combine the butter and shortening with a mixer until smooth.
17. Add about half of the powdered sugar and mix until smooth and well combined.
18. Add 3 tablespoons of water or milk and the almond extract to the frosting and mix until well combined.
19. Add remaining powdered sugar and mix until smooth. Add additional water or milk as needed to get the right consistency.
20. Pipe the frosting onto the cupcakes. I used Ateco tip 844.
21. Press broken sliced almonds onto the sides of the bottom of the frosting. Refrigerate cupcakes until ready to serve. Serve at room temperature.

To make the cupcakes non-alcoholic, leave out the amaretto in the filling and use 5 1/2 tablespoons of heavy whipping cream and 3/4 teaspoon of almond extract. 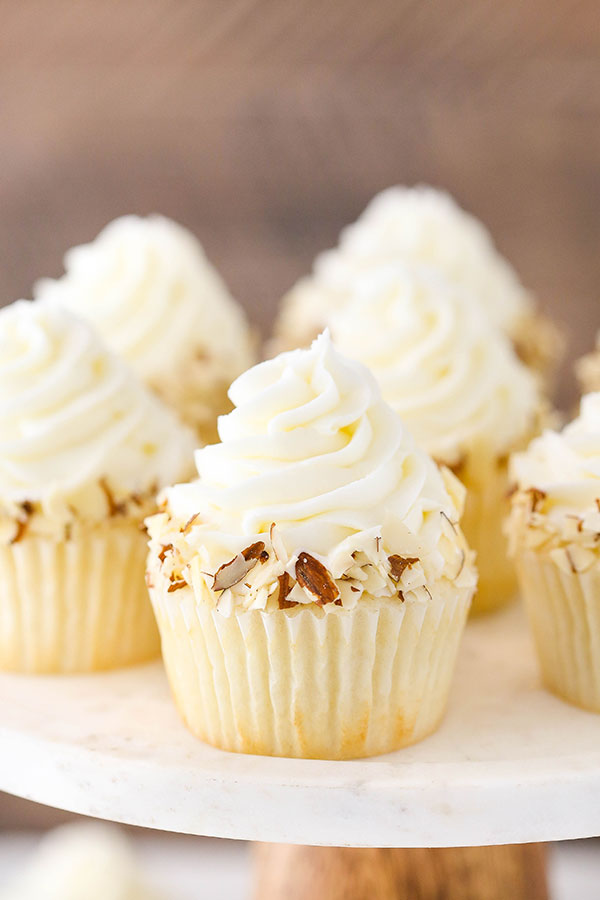