If you’d rather make a full-sized cheesecake instead of a bunch of mini cheesecakes, try this Banana Pudding Cheesecake recipe. Both recipes are great for serving a crowd! 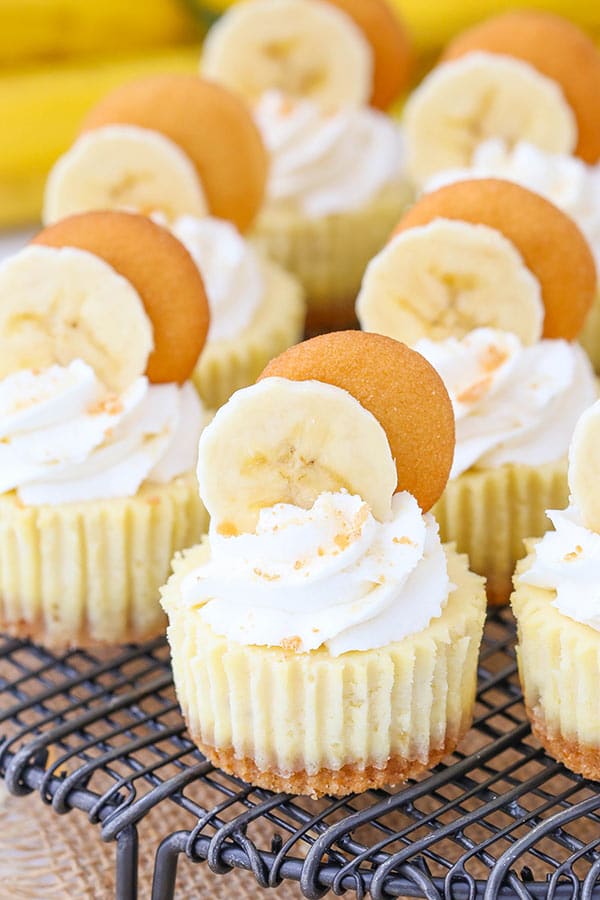 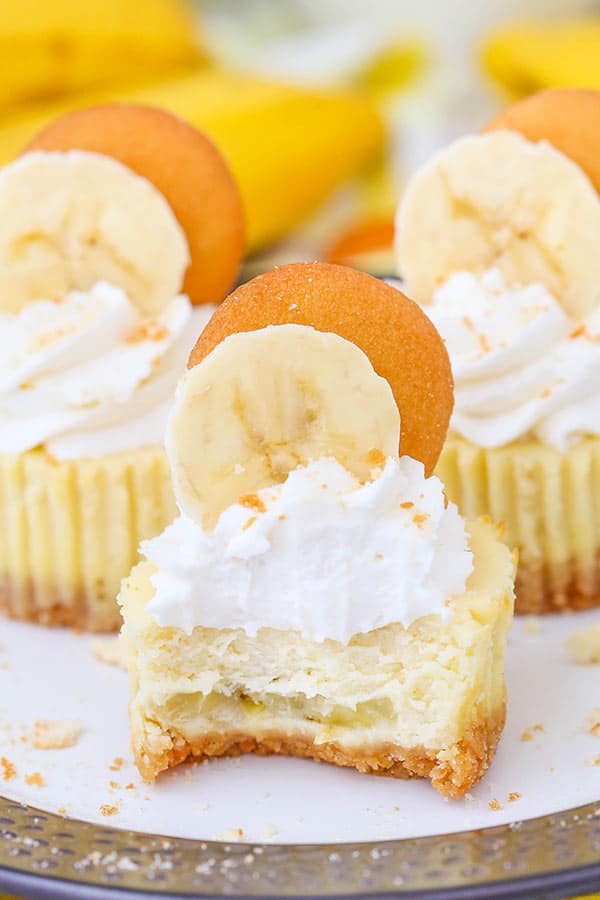 I am a lover of all things banana and so is the hubs. It’s one of the things I love about him. 😉 We’d easily fight over the last banana flavored candy, piece of cake, etc. Banana pudding is part of that shared love. If there’s one dessert that’s hard for us to resist, it’s banana pudding.

When I was in New York a couple months ago, I made a quick stop at Magnolia Bakery. They are known for their banana pudding so I had to try it. They also have lots of fun cakes and cupcakes so be for you could say, “just the banana pudding”, I had about 3 slices of cake and 2 cupcakes to go along with my banana pudding.

I took it all back to my hotel to try them out and have a little tasting party. That’s basically my idea of a good time. And it shouldn’t come as a huge surprise that the banana pudding was easily the best! I told myself, “only a few bites” and ate the whole container. Whoops! 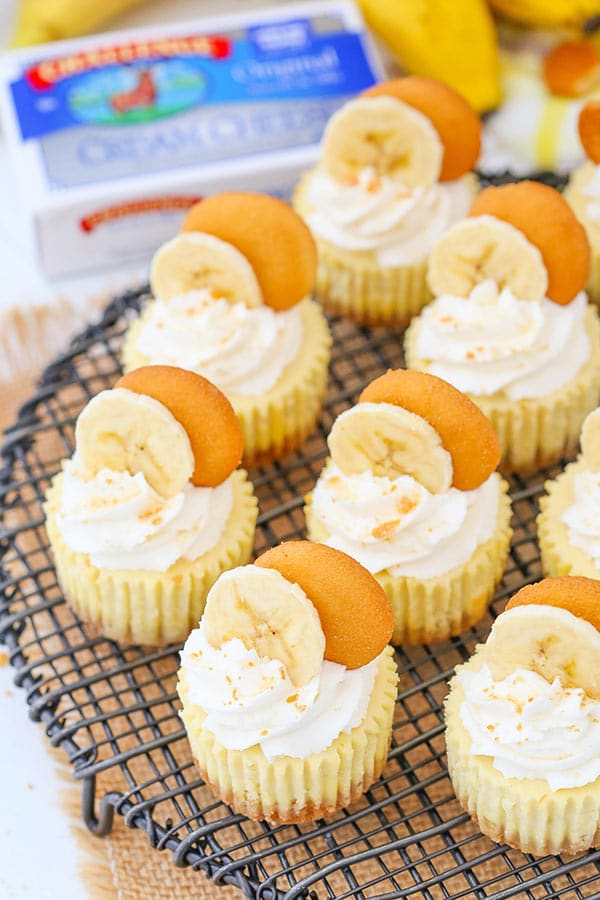 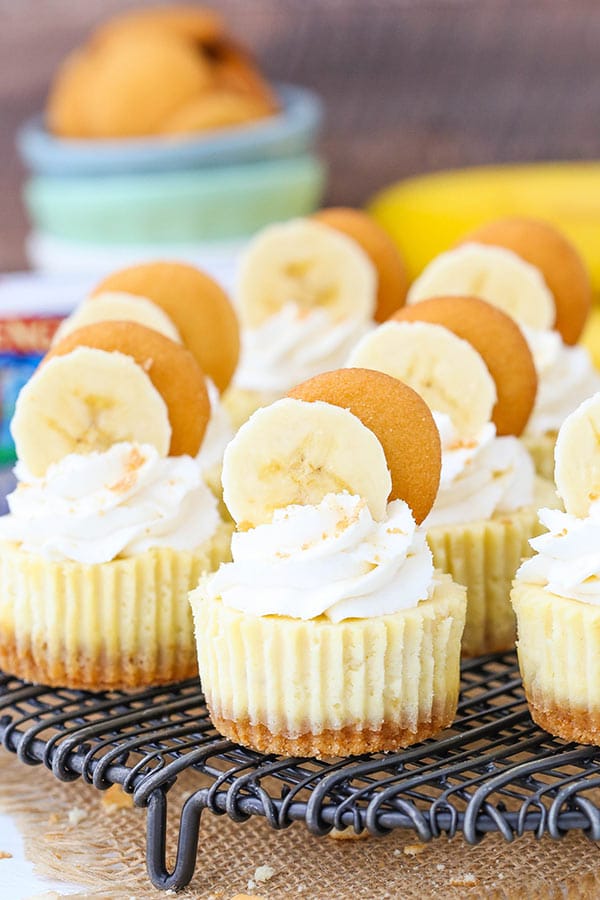 How To Make Banana Pudding Cheesecake

Well don’t be surprised if you have a similar experience with these Mini Banana Pudding Cheesecakes. Just one bite or just one cheesecake easily turns into several. They are SO good!

To make them, start with the crust. Every good banana pudding has layers of vanilla wafers, so they are used to make the crust. Combine the crumbs with a little sugar and some delicious Challenge butter. If you’ve never tried Challenge butter, you should definitely check it out. I’ve been using it for a while now and it’s definitely a great, high quality butter. It’s 100% real cream butter with nothing artificial and no added hormones, which I love.

For the filling, you’ll also start with Challenge cream cheese. Again, nothing artificial and farm to fridge in two days, so you know it’s fresh! Add your usual suspects – sugar, flour and sour cream. Next comes the good stuff – some mashed bananas! They add just enough banana flavor to the mini cheesecakes! With some additional banana slices layered into the filling, it’s banana heaven! I know browned bananas are often used in baking, but for these I like using nice, yellow bananas. Feel free to use either though. Add the last few ingredients and bake!

Once the cheesecakes are baked and cooled, top them with a swirl of whipped cream, a vanilla water and a little banana slice! So cute! They’d be the perfect little treat to share with friends at a potluck or summer BBQ!

The hubs and I couldn’t wait to get our hands on these! As soon as I was done taking photos, I handed them straight to the hubs. He had my same problem – he just kept eating. Pretty sure he ended up with a bit of a stomach ache after, but he claims it was worth it. 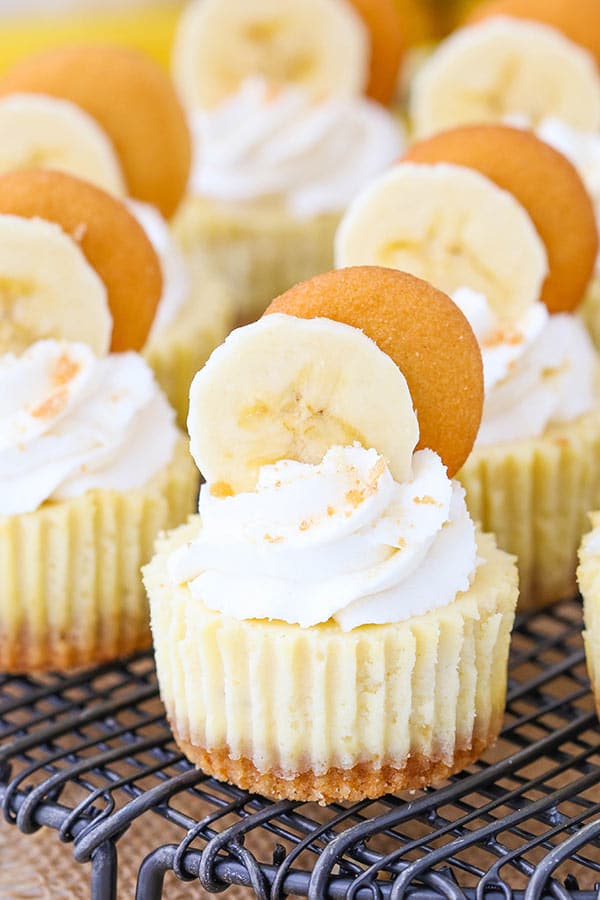 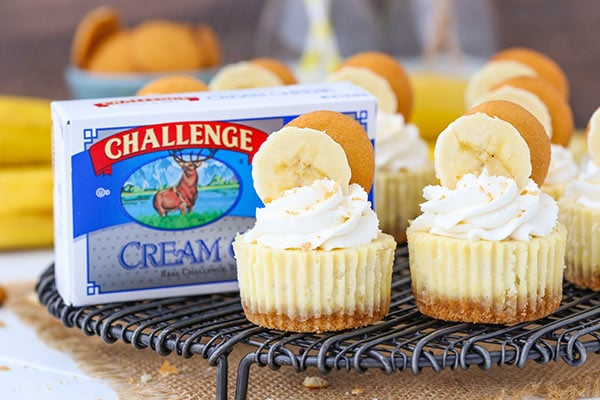 1. Preheat oven to 325°F (162°C). Add cupcake liners to a cupcake pan.
2. Combine the vanilla wafer cookies crumbs, sugar and melted butter. Divide the mixture between the cupcake liners (about 2 tablespoons per cup) and press into the bottoms.
3. Bake the crusts for 5 minutes then remove from oven. Allow to cool while you make the filling.

4. Reduce oven to 300°F (148°C).
5. In a large bowl, mix the cream cheese, sugar, and flour until combined (Use low speed to keep less air from getting into the batter, which can cause cracks). Scrape down the sides of the bowl.
6. Add the sour cream and mashed bananas. Beat on low speed until well combined.
7. Add the vanilla extract and the first egg and beat slowly until mostly combined.
8. Add the remaining egg and mix until well combined.
9. Add a small amount of filling to each cheesecake cup, then add a couple banana slices on top.
10. Add additional filling on top of the banana slices, filling each cup until mostly full.
10. Bake the cheesecakes for 18-20 minutes, then turn off the oven and leave the door closed for another 5 minutes.
11. Crack the oven door and allow cheesecakes to cool for 15-20 minutes, then put in the fridge to finish cooling.
12. When cheesecakes are cooled, remove them from the pan.
13. To make the whipped cream, add the heavy whipping cream, powdered sugar and vanilla extract to a large mixer bowl. Whip on high speed until stiff peaks form.
14. Pipe a swirl of whipped cream on top of each cheesecake and finish off with a banana slice and vanilla wafer.
15. Refrigerate until ready to serve. Cheesecakes are best when well covered for 2-3 days.