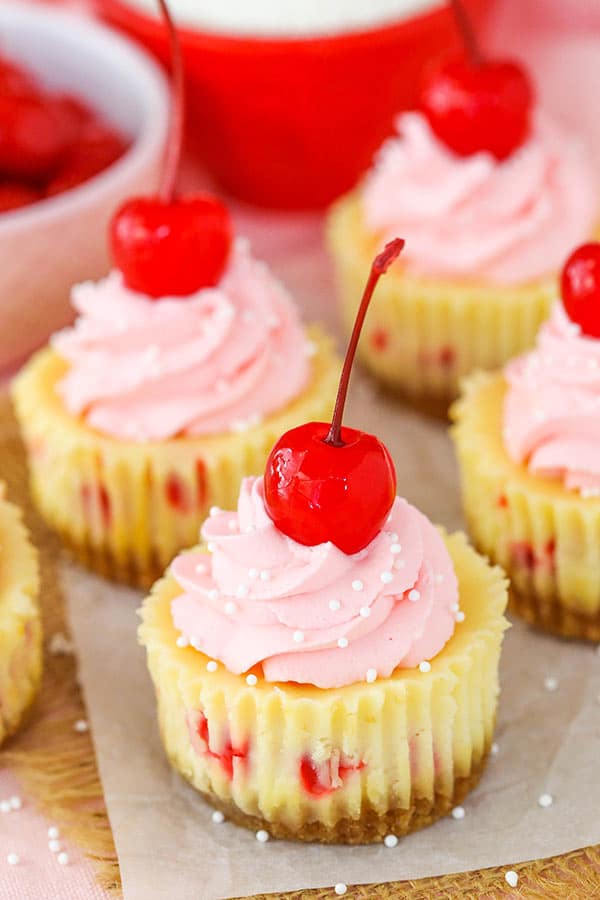 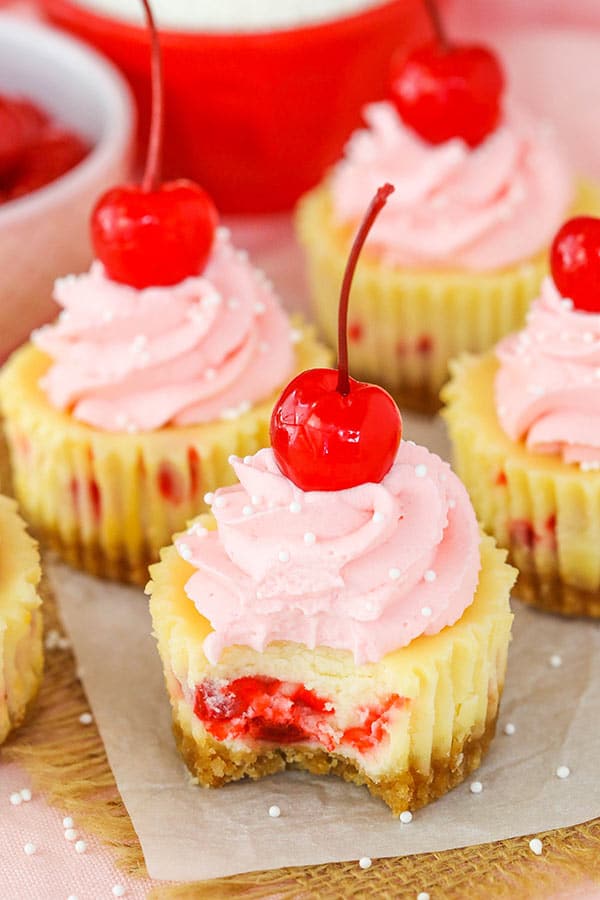 So we are officially on baby watch. We’ve got two appointments a week until they arrive and last week everything looked good at both appointments. In fact, the twins seem quite content in there apparently. They are growing and so am I. 😉

I’ve got some serious swelling of the hands and feet going on, pregnancy carpel tunnel (who knew that was a thing?!) making my right hand pretty much numb so it makes typing a little difficult (can hardly feel the keys), and I’m all but immobile. The hubs was sick last week, so together we were quite the mess.

It’s pretty hard to get me to stop and slow down (even despite all my physical limitations), so now that the hubs is feeling better, he’s back to making sure I stay off my feet. It’s a tough job for anyone to accomplish and requires a very watchful eye. He’s got a lineup of people scheduled to be at the house with me this week when he can’t be so that I can’t get away with anything. 🙂 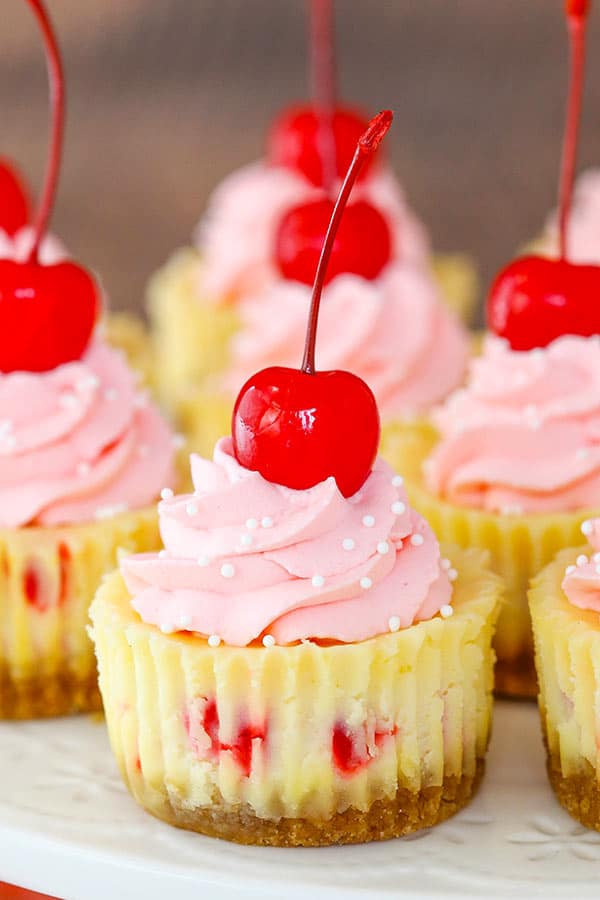 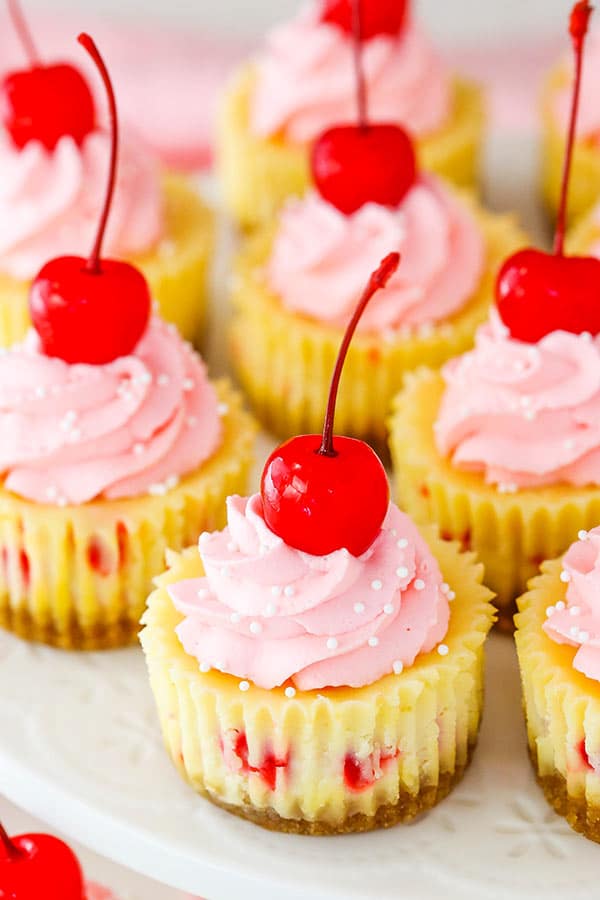 Good thing I’m still allowed to share my treats with you guys! You definitely don’t want to miss out on these sweet little mini cheesecakes. Almond and cherry is seriously such a yummy flavor combo!

To start out, you’ve got the little crusts. I like to use vanilla wafer cookies for a cheesecake crust sometimes, but you can always substitute graham cracker crumbs. The cookies are a little sweeter than the graham crackers and true to my serious sweet tooth, I dig the cookies.

The filling is easy to put together and flavored with almond extract. The cherry flavor comes from adding in some chopped maraschino cherries, so don’t be too shy about adding them in. The fresh pop of fruit is delicious!

Once the cheesecakes are baked and cooled, they are topped with a light cherry whipped cream. It adds a little extra cherry flavor, which I’m a fan of.

The final cheesecakes are thick, creamy and so refreshing! With all the pink, they’d make a fun treat to share for Valentine’s Day too. I hope you enjoy them! 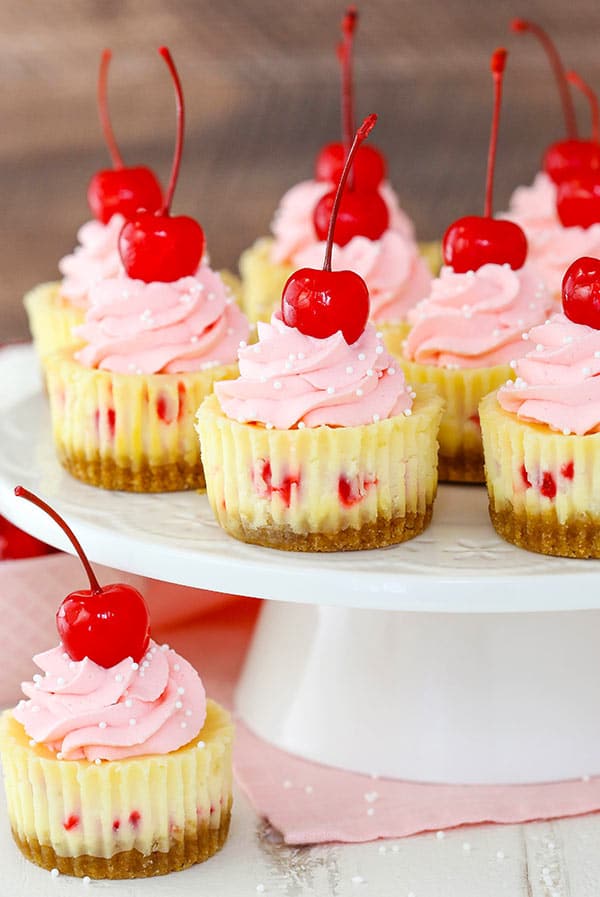 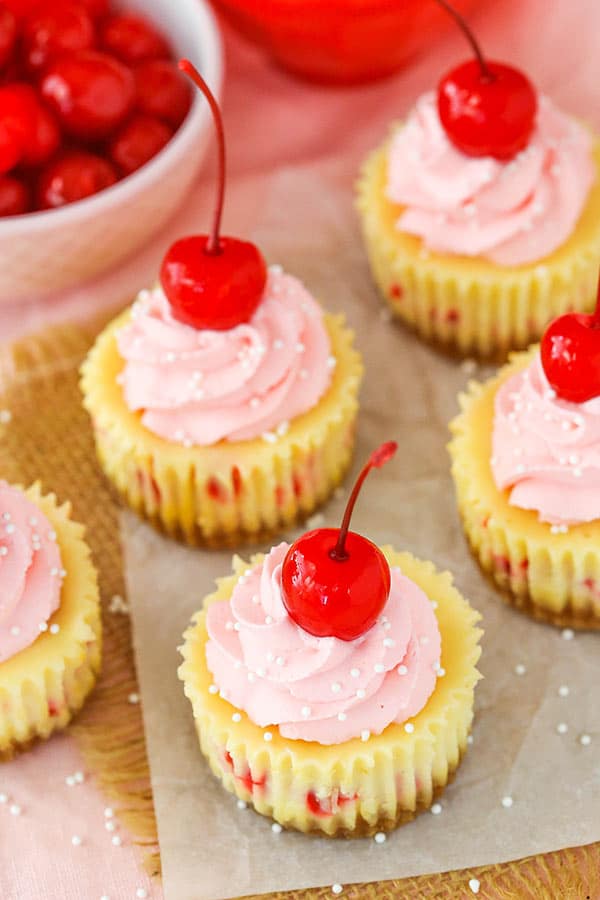 1. Preheat oven to 325°F (162°C). Add cupcake liners to a cupcake pan.
2. Combine the vanilla wafer cookies crumbs, sugar and melted butter. Divide the mixture between the cupcake liners (about 2 tablespoons per cup) and press into the bottoms.
3. Bake the crusts for 5 minutes then remove from oven. Allow to cool while you make the filling.
4. To make the filling, reduce oven to 300°F (148°C). In a large bowl, mix the cream cheese, sugar, and flour until combined (Use low speed to keep less air from getting into the batter, which can cause cracks). Scrape down the sides of the bowl.
5. Add the sour cream and almond extract. Beat on low speed until well combined.
6. Add the eggs one at a time, beating slowly and scraping the sides of the bowl after each addition.
7. Gently stir in the chopped cherries.
8. Divide the filling between the cheesecake cups until the cups are mostly full.
9. Bake the cheesecakes for 18-20 minutes, then turn off the oven and leave the door closed for another 10 minutes.
10. Crack the oven door and allow cheesecakes to cool for 15-20 minutes, then put in the fridge to finish cooling.
11. When cheesecakes are cooled, remove them from the pan.
12. To make the whipped cream, add the cream, powdered sugar and cherry juice to a large mixer bowl fitted with the whisk attachment. Whip on high speed until stiff peaks form.
13. Pipe the whipped cream onto the tops of the cheesecakes and top with a cherry.
14. Refrigerate until ready to serve.