If you love the mini version of this recipe, you need to try the full sized Cinnamon Roll Cheesecake recipe. And if you crave all things cinnamon flavored, be sure to also check out this Apple Cinnamon Cheesecake! 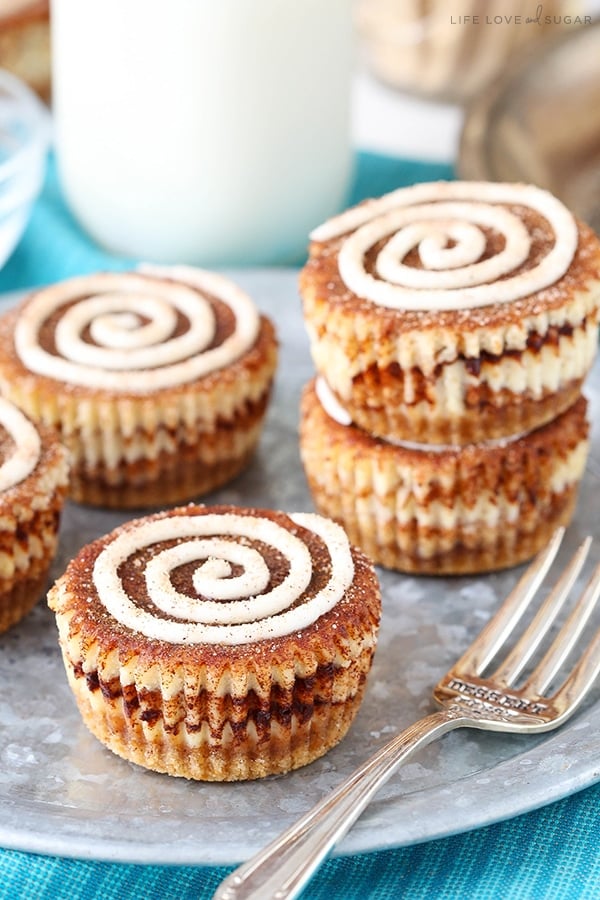 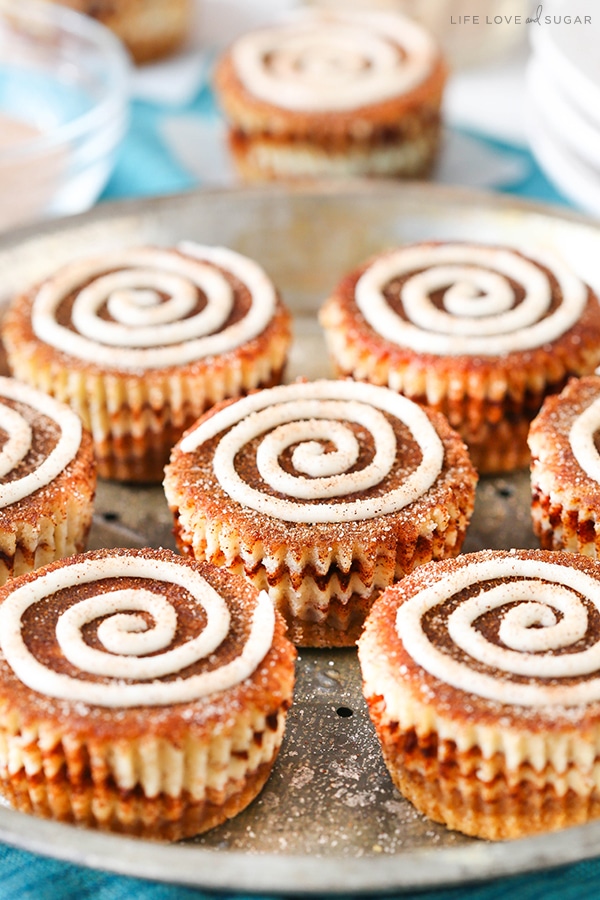 A Fun and Easy Breakfast Recipe

If you’ve hung around here a lot, then you probably already know I love my cinnamon. If I thought it’d be good, I’d add it to just about anything. When you toss it in a cinnamon roll and cover it with frosting, it only gets more delicious. It’s definitely one of the best parts of breakfast. Even better is when you combine pancakes and cinnamon rolls and make cinnamon roll pancakes. Um, yes please!

And course anything mini is better, right? So clearly these mini cinnamon roll cheesecakes have everything going for them. 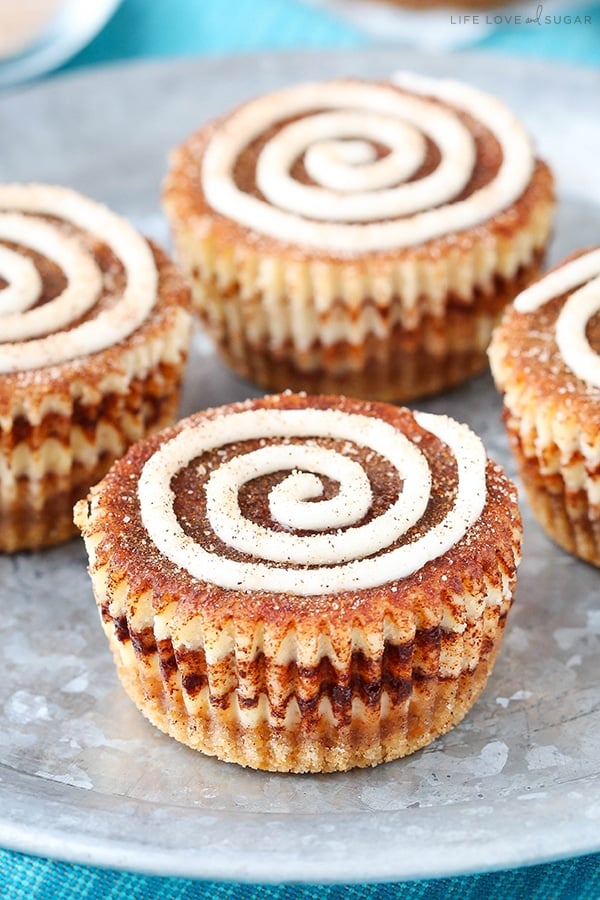 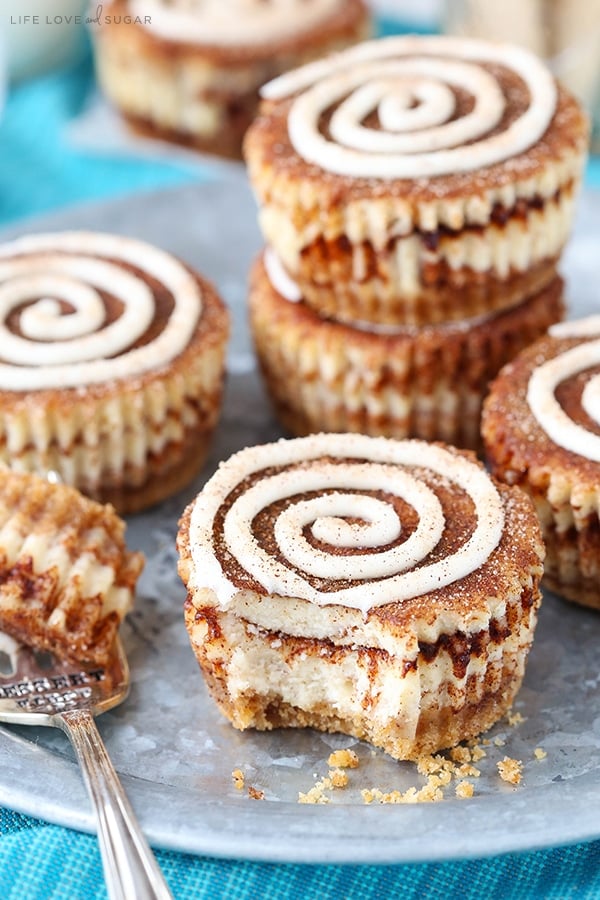 So let’s talk a little about how to put these cheesecakes together. Since they are mini, they’re made in a cupcake pan. It makes these super easy to make because you don’t need to use a water bath. #CheesecakeGoals

The crust is made with some vanilla cookies, Challenge butter and little cinnamon and sugar. You guys, there is some cinnamon in every single bite of these cheesecakes. Everything for the crust is combined, pressed into the cupcake tins and baked for about 5 minutes.

While the crusts bake, you can make the filling. You’ll first want to combine the Challenge cream cheese, sugar, flour and cinnamon and mix everything until it’s smooth. I always recommend using a low speed when mixing to make sure you don’t incorporate too much air into the batter, which can cause cracks. Next you’ll add the sour cream and vanilla extract, and finally the eggs. The cinnamon sugar swirls are made with a mix of cinnamon and sugar. 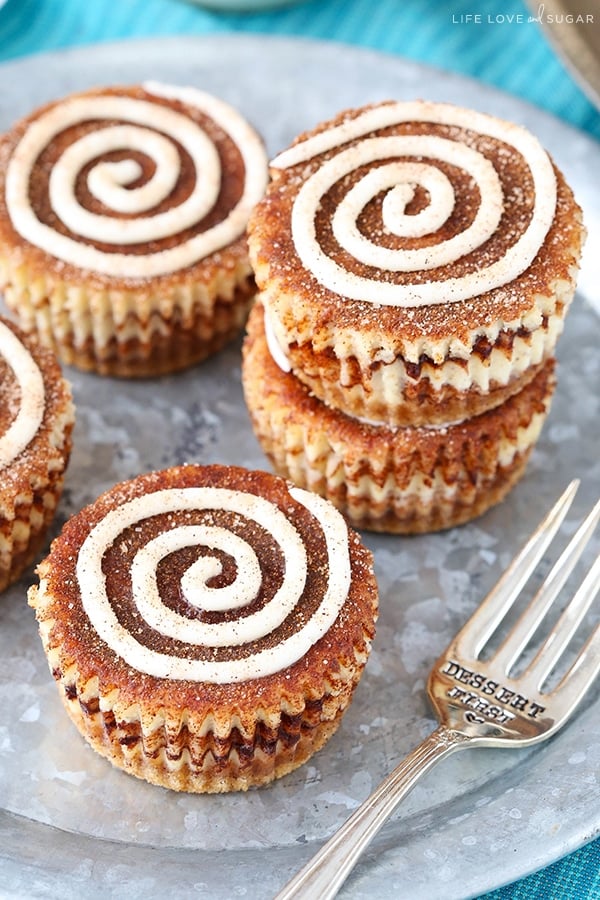 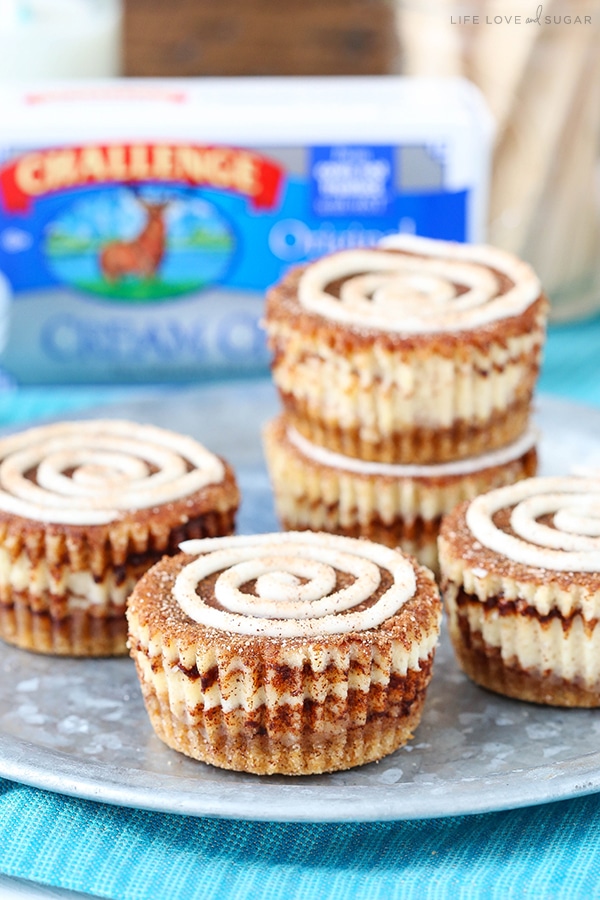 Once you have everything combined, it’s time to layer the cheesecakes. You’ll start with between 1/2 to 3/4 a tablespoon of cheesecake filling in the bottom of each crust – it doesn’t have to be exact. Sprinkle a layer of cinnamon sugar over the filling so that it’s fully covered. Add another layer of filling and cinnamon sugar, then one more layer of each, for a total of 3 of each layer. The cupcake tins should be mostly full.

How Long Does It Take To Bake These Mini Cheesecakes?

The cheesecakes bake for about 15 minutes, then have a slow cooling process to make sure they don’t cool too quickly and crack. Once they are done, they should be refrigerated until cold and firm. They’re topped with a swirl of frosting to give them that cinnamon roll look and finish them off with the necessary frosting that all cinnamon rolls should have!

And there you have them – super fun mini cinnamon roll cheesecakes! Not only did the hubs and I love them, but he also took some to work and they were a big hit! Delicious cinnamon sugar in every bite! 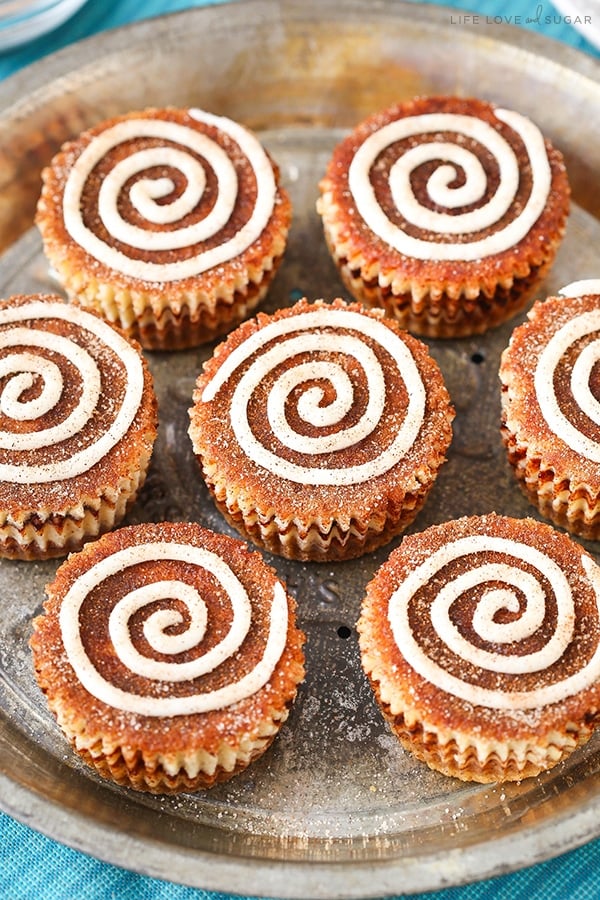 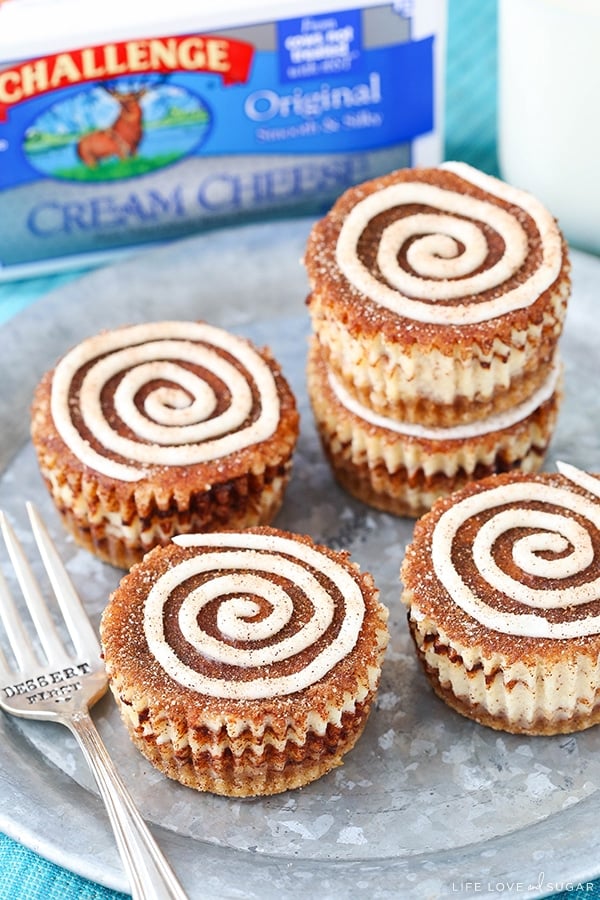 1. Preheat oven to 325°F (162°C). Add cupcake liners to a cupcake pan.
2. Combine the vanilla wafer cookies crumbs, sugar, cinnamon and melted butter. Divide the mixture between the cupcake liners (about 2 tablespoons per cup) and press into the bottoms.
3. Bake the crusts for 5 minutes then remove from oven. Allow to cool while you make the filling.

1. Reduce oven to 300°F (148°C).
2. In a large bowl, mix the cream cheese, sugar, flour and cinnamon until combined (Use low speed to keep less air from getting into the batter, which can cause cracks). Scrape down the sides of the bowl.
3. Add the sour cream and vanilla extract. Beat on low speed until well combined.
4. Add the eggs one at a time, beating slowly and scraping the sides of the bowl after each addition. Set filling aside.
5. In a small bowl, combine the cinnamon and sugar for the cinnamon sugar filling
6. Add about 1/2 to 3/4 of a tablespoon of filling into each cupcake, then sprinkle some cinnamon sugar over the filling, fully covering the filling. Repeat two more times for a total of three layers of filling and cinnamon sugar. The cupcakes should be mostly full.
7. Bake the cheesecakes for 15-17 minutes, then turn off the oven and leave the door closed for another 5 minutes.
8. Crack the oven door and allow cheesecakes to cool for 15-20 minutes, then put in the fridge to finish cooling.
9. When cheesecakes are cooled, remove them from the pan.
10. To make the frosting, mix the butter until smooth.
11. Add the powdered sugar, vanilla extract and mix and mix until smooth.
12. Add the frosting to a piping bag fitted with a small round piping tip (or a ziplock bag with the corner cut off) and pipe a swirl of frosting onto each cheesecake.
13. Refrigerate cheesecakes until ready to serve.