This Cinnamon Roll Snack Cake is a soft, gooey cinnamon roll in cake form! It’s full of cinnamon, covered in icing and best served warm with a fresh glass of milk!

If you love this cake as much as I do, trust me when I say you should make my Cinnamon Roll Poke Cake too. You’ll thank me later! 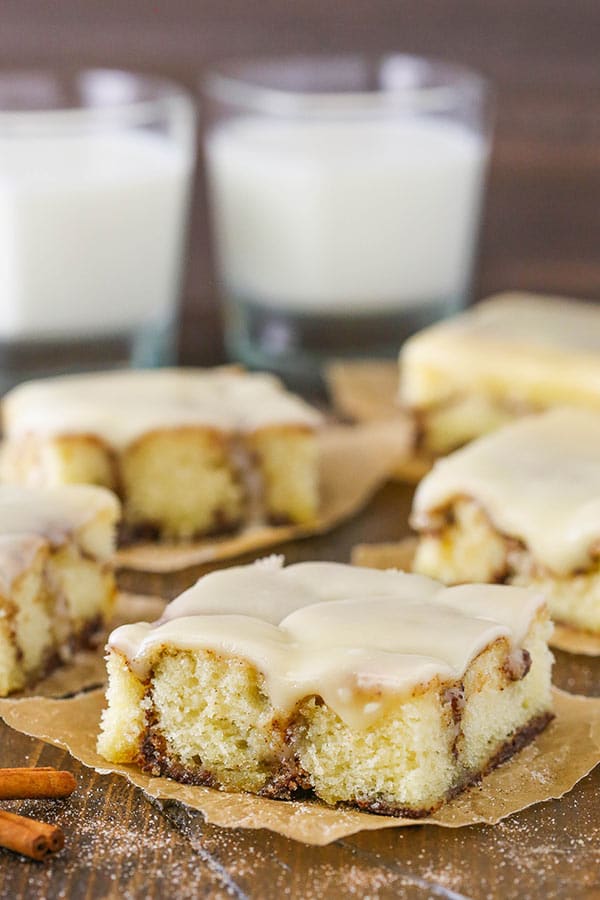 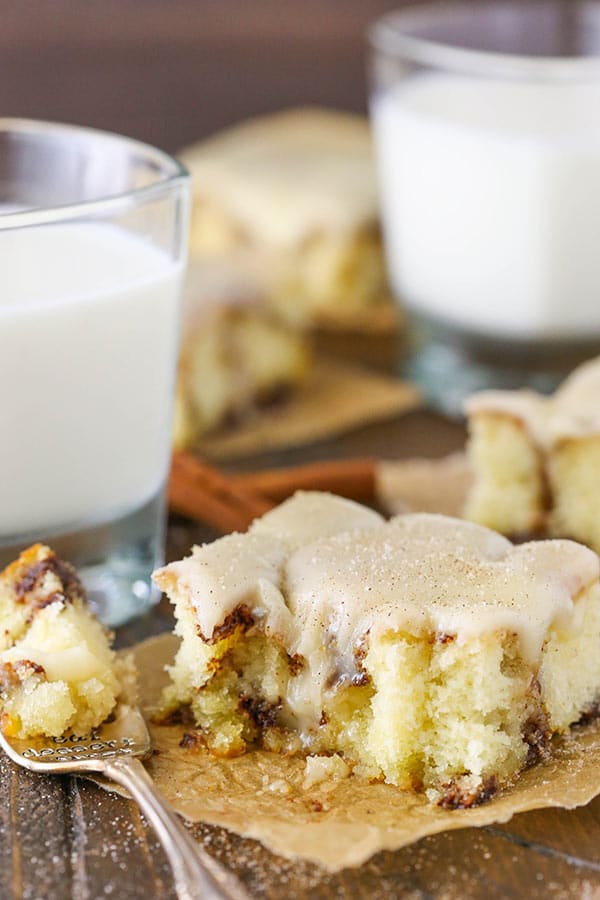 So the hubs and I were both a little weird in our own ways this weekend. The hubs is working on some physical training and it was recommended to him that he drink about a gallon of water over the weekend. That may not sound like much to drink over a two day period, but it is 16 cups of water. SO much water!

And then of course there was me. Apparently I was talking a good bit in my sleep one night. I’ve been known to scream out or something, but according to the hubs he’s never heard me actually like have a conversation in my sleep, which is just what I did. If I were him, I totally would’ve listened to what I was saying. But once he realized I was sleeping he just feel back asleep. He doesn’t have nearly enough curiosity! 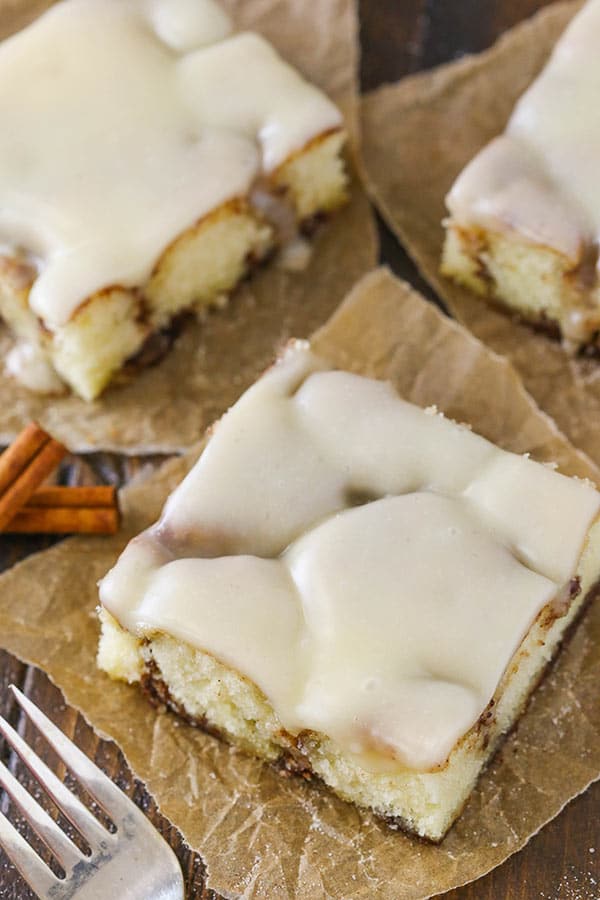 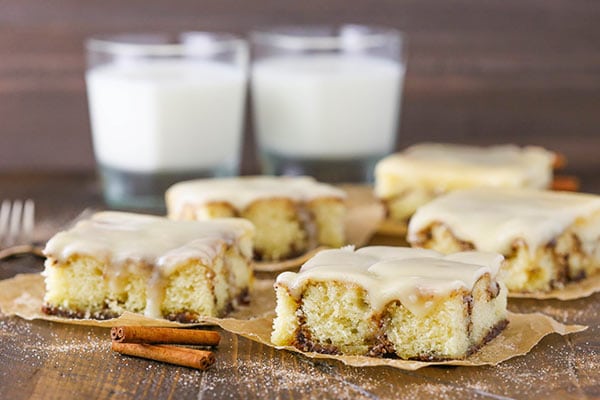 After a long night of sleep talking, the best way to re-charge is with this cinnamon roll snack cake. 😉 In fact, just about any morning would be better with this cake in it. Cinnamon roll + cake = the perfect breakfast.

It took some time to get this cake just right. I played around with the amount of cinnamon, the thickness of the cake and the icing. The final cake is a winner.

The cake itself is just dense enough to hold the cinnamon mixture. It’s not necessarily dense, it just not as fluffy as your average cake. Which is ok, because it’s a cinnamon roll cake.

There’s also plenty of cinnamon sugar swirl in every bite! My favorite part! The cinnamon sugar mixture actually covers the whole cake before baking. Once you add it to the top of the cake, use a toothpick to swirl things around. You won’t necessarily notice a difference right away, but as it bakes the cinnamon mixture falls down into the areas where you created the swirl, so be sure to make some nice swirls.

Once it’s baked, add the icing. You could use a simple glaze, but I wanted an icing that wouldn’t just soak into the cake. To achieve that, the icing is cooked over the stove for a few minutes.

The final cake is delicious and so much like eating a cinnamon roll. It’s definitely a cake that’s best eaten warm and it’s totally addicting! 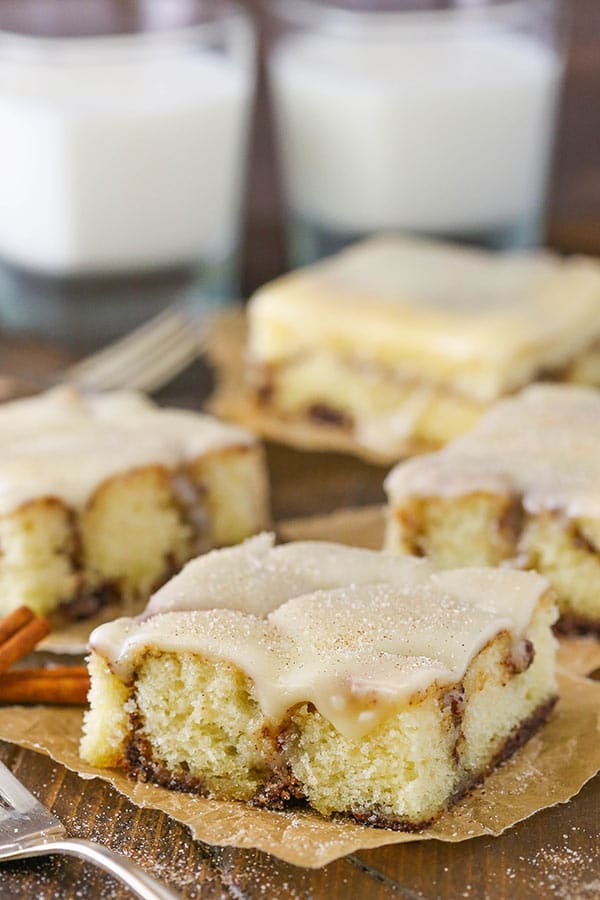 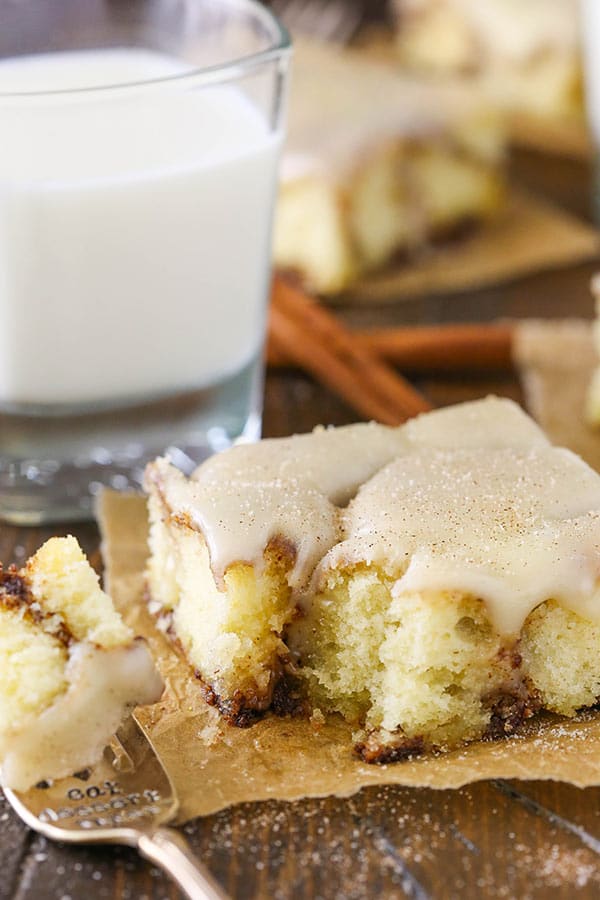 This Cinnamon Roll Snack Cake is a soft, gooey cinnamon roll in cake form! It’s full of cinnamon, covered in icing and best served warm with a fresh glass of milk!

1. Preheat oven to 350°F (176°C) and grease a 9×13 inch cake pan.
2. To make the cinnamon filling, combine the brown sugar and cinnamon in a medium sized bowl.
3. Add the melted butter and mix until combined. Set aside.
4. To make the cake batter, combine the sugar and butter to a large mixer bowl and beat on medium speed until light in color and fluffy, 3-4 minutes. Don’t skimp on the creaming/beating time.
5. Add the sour cream and mix until well incorporated.
6. Add the milk and mix until well incorporated.
7. Add the eggs and vanilla extract and mix until smooth.
8. Combine the dry ingredients in a separate bowl.
9. Add the dry ingredients to the batter and mix until smooth.
10. Pour the batter into the prepared pan and spread into an even layer.
11. Drizzle the cinnamon sugar mixture over the top of the cake. It will cover most of the top of the cake.
12. Use a toothpick to swirl the cinnamon mixture around. You may not notice a difference immediately, but the swirls are where the cinnamon mixture will fall down into the cake while baking.
13. Bake the cake for 22-24 minutes, or until a toothpick inserted comes out with a few crumbs, then remove from the oven to cool.
14. To make the icing, combine all the icing ingredients except for the powdered sugar in a small sauce pan.
15. Heat on low heat until the sugar is melted, then turn heat to medium to bring to a boil.
16. Boil for 3 minutes, stirring occasionally, then remove from heat and immediately pour into a heat-proof glass bowl.
17. Whisk in the powdered sugar and allow to cool slightly and thicken. If you find your icing to be a little thick, just add a touch more water to thin it back out. If it’s too thin, add a little more powdered sugar.
18. Pour the icing evenly over the cake. Serve warm. If some cake is left over, store covered in the fridge. Warm back up to serve leftovers.