This Triple Berry Crisp is such an easy and amazing summer dessert. With mixed berries and a cinnamon & oat filled topping, it’s filled with some of my very favorite flavors! 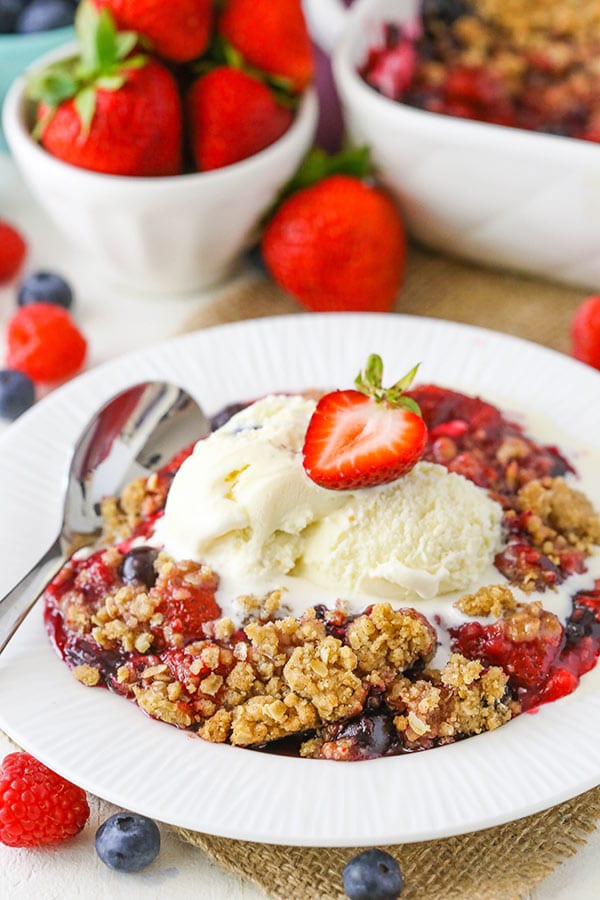 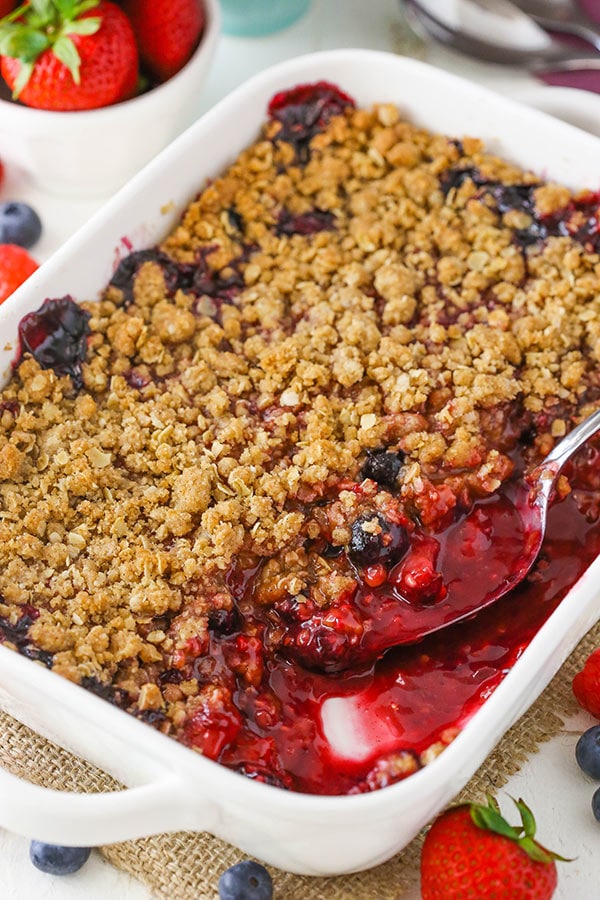 So last night the hubs was preparing for several weeks of training for a new role in his job. He’s got a whole list of supplies he needs to bring with him and he was pulling things together.

There ended up being a few things on the list than I ran out to get for him and I actually found it pretty funny. It was things like a notebook, ball point pens and pencils. It reminded me of being a kid and made me wonder if a few years from now I’d be buying these kinds of things for our child to go to school. 🙂

I brought them home to the hubs and he was all happy. I don’t know what it is about new things, but even when it’s pens and paper you just feel spiffy. 🙂 I watched as he got things organized with a silly grin on my face the whole time. The irony of him getting what’s basically school supplies ready for work for the next several weeks was equally funny and totally cute. 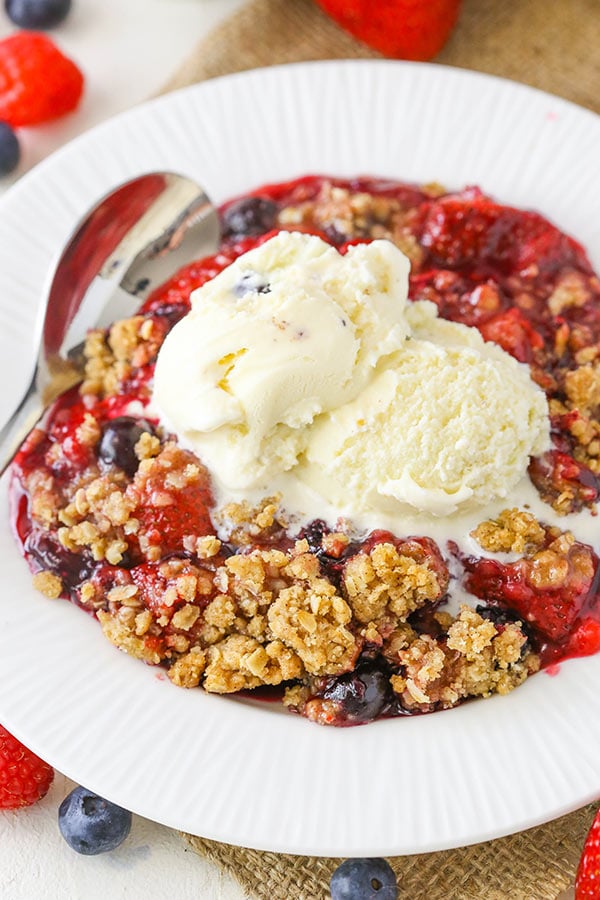 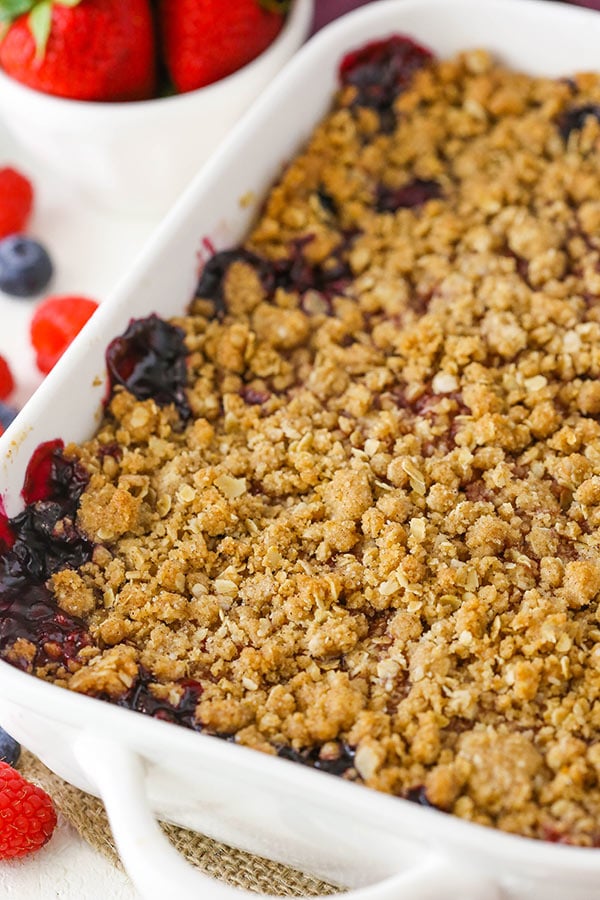 Now onto this crisp! There’s just something about the combination of berries and cinnamon that I can’t get enough of. This probably is no secret, but cinnamon totally amplifies the flavor of the berries. I’ve been drinking berry-filled smoothies quite regularly lately and I always add a bit of cinnamon. It just makes the flavor that much better. Plus, I could just about live off of cinnamon. It should be considered one of my main food groups.

How to Make Triple Berry Crisp

This crisp couldn’t get any easier. Toss together the berries with the sugar, cinnamon, cornstarch and lemon juice and add them to a baking dish. I used most of one package each of the three main berries – one pound of strawberries and 6 ounces each of blueberries and raspberries.

For the topping, mix together the oats, flour, sugar and cinnamon and then add the melted butter. The mixture comes together and is nice and crumbly for covering the berries. I’m a big fan of having plenty of the crisp topping in every bite!

Bake the crisp and serve warm, and definitely with ice cream! Enjoy! 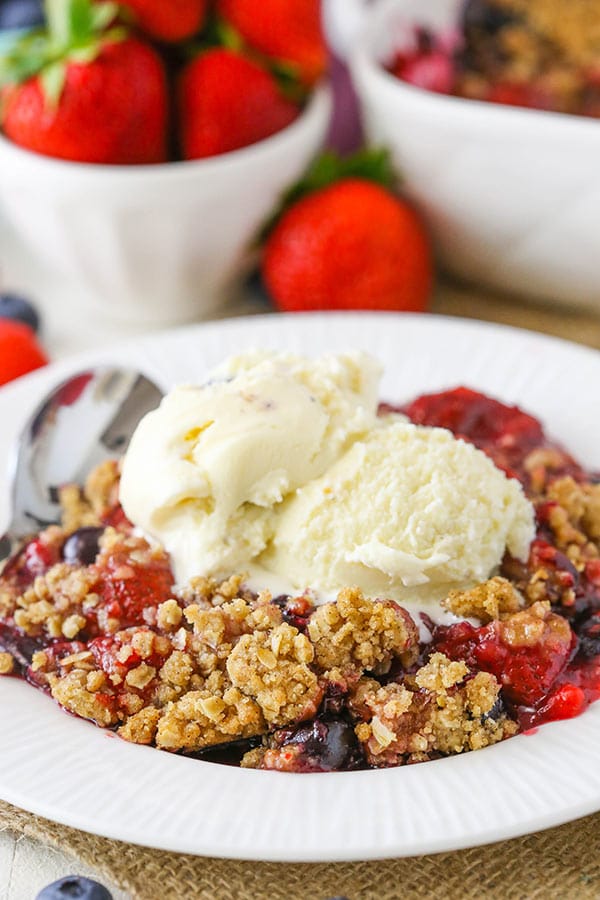 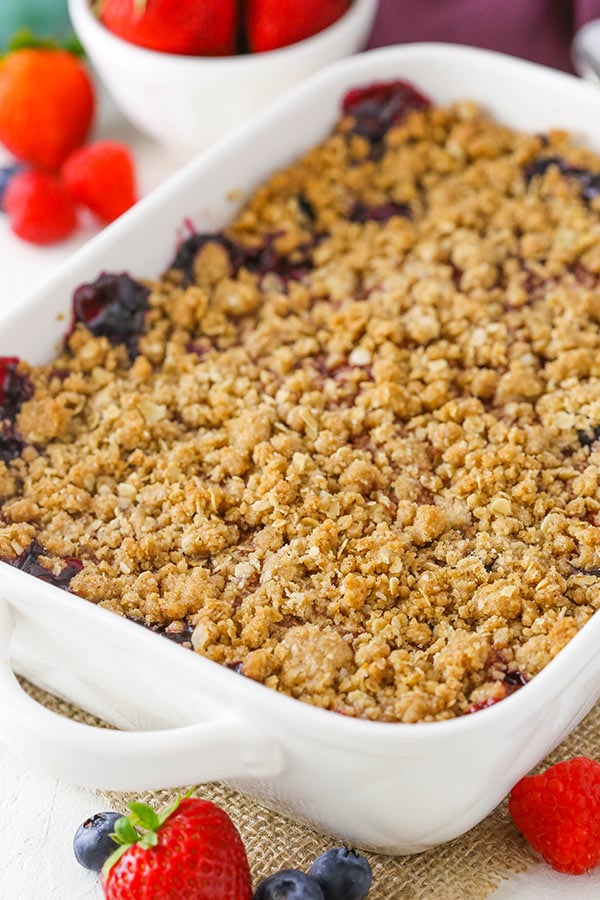 This Triple Berry Crisp is such an easy and amazing summer dessert. With mixed berries and a cinnamon & oat filled topping, it’s filled with some of my very favorite flavors!

1. Preheat the oven to 350 degrees and grease a 9×11 pan.
2. In a medium sized bowl, toss the berries, sugar, cinnamon, cornstarch and lemon juice to combine and add to the prepared pan.
3. In a another medium sized bowl, combine the oats, flour, sugars and cinnamon until well combined.
4. Add the melted butter and stir until combined and crumbly.
5. Sprinkle the topping evenly over the berries.
6. Bake for 45-55 minutes until golden around the edges and bubbly.
7. Serve warm with a scoop of ice cream.

*I used most of one package each of the three main berries – one pound of strawberries and 6 ounces each of blueberries and raspberries.