This Berries and Cream Layer Dessert is made with a vanilla cookie crust, dulce de leche and a tasty fruit-filled cream layer! It’s so fresh and creamy, every bite is a little piece of heaven!

For another fruity treat, be sure to check out my Triple Berry Trifle Recipe! 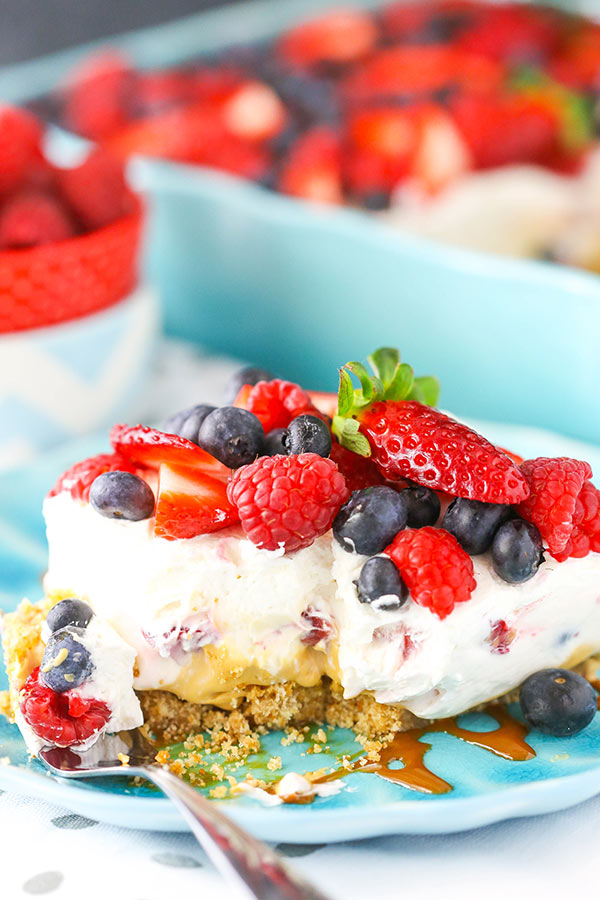 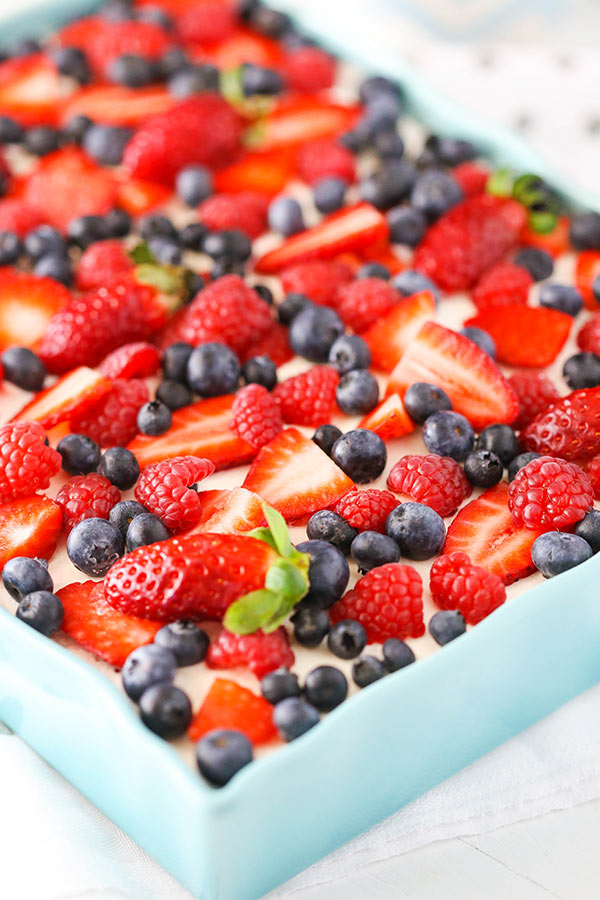 So we got snow in our area of the Atlanta ‘burbs this weekend, but not quite as much as we’d have liked. We wanted things covered. It’s just so pretty and doesn’t happen often so when the predictions are seriously saying it’ll happen, you get excited. 🙂 Even though we didn’t get as much snow, it was still just enough to be fun. Kids were sledding and it was beautiful watching it fall.

Of course it was cold! So cold! With the wind chill, walking Jessie was a touch brutal. So we made a fire Saturday night. The hubs uses fire starters to get the logs lit and we have your typical lighter thingy where you press the button and at the end there’s a little flame. Well, apparently both of the ones we had ran out and weren’t working. I offered to run to the store, but the hubs had a better idea.

“What thing? Oh you mean my kitchen torch? Like for creme brûlée?”

“Umm, there’s gas in the handle and stuff. Are you sure you aren’t going to blow the house up?”

Hesitantly I go and grab the torch and show him how to use it. It’s a strong, powerful flame and immediately his face lit up with excitement to use it.

The next thing I know he is having a grand old time at the fireplace with the torch. I walked over to him and reminded him that it was my torch and it is for the kitchen. The smile I got in return was not promising. I have a feeling I’ll soon find that my kitchen torch is missing. 😉 Fortunately no torch is needed for this dessert. It’s *almost* no bake. So close! 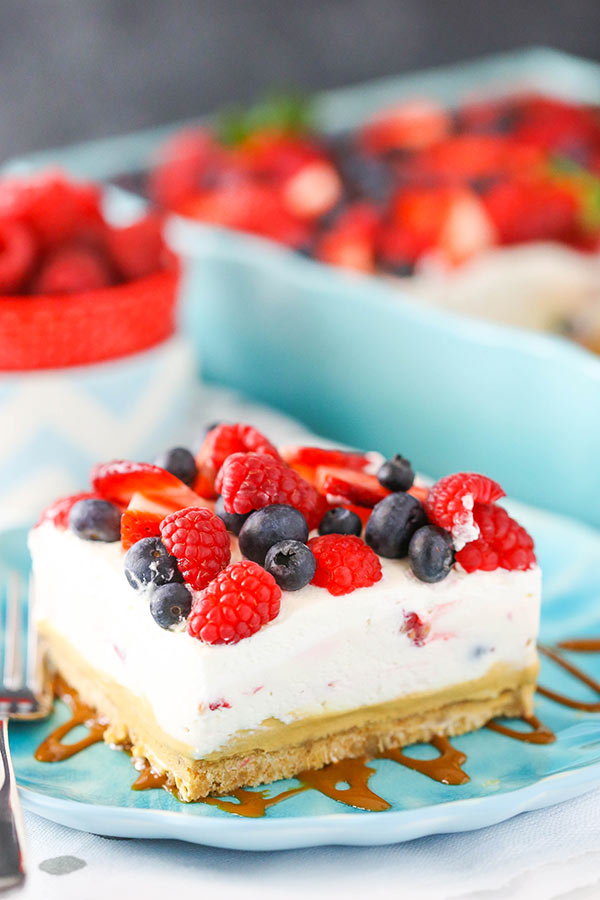 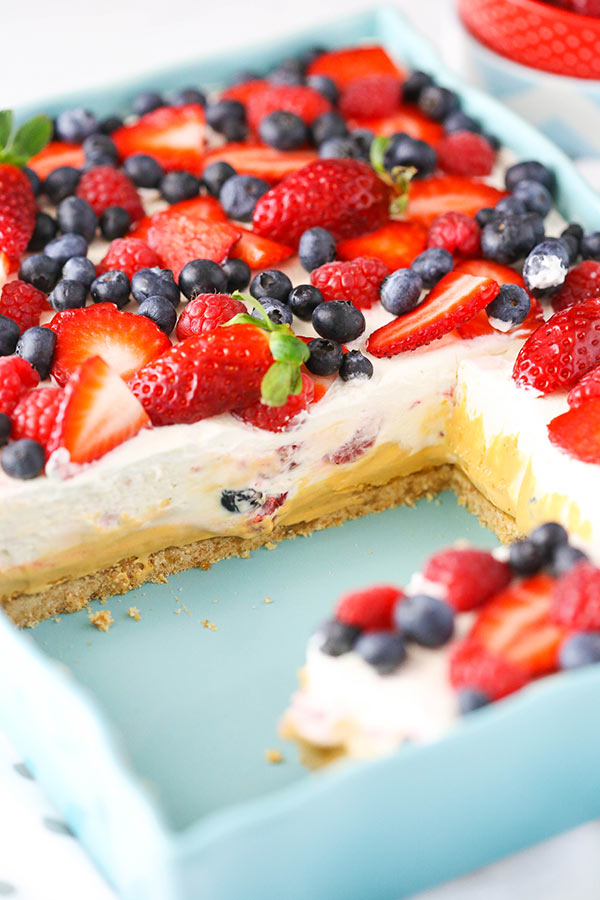 How to Make This Triple Berry Treat

The base layer of this layered delight is made with vanilla wafers. You could use another cookie or even graham crackers, but I love the vanilla flavor of those cookies. They make a great crust with great flavor. There’s a fairly thick crust on the dessert, which I love. The crust is also the only part of the dessert that is baked and I do recommend it. You don’t absolutely have to, but it makes the crust more stable. Since everything else is not baked and stays somewhat soft, a stable crust makes it easier to cut and serve the dessert.

The main layer of this dessert is the berries and cream layer. It’s made with cream cheese, vanilla, whipped cream to lighten it up and fresh chopped fruit. There are few things more delicious than fresh berries and cream, and when paired with the dulce de leche, it’s just SO GOOD!

The whole thing is topped with a thin layer of whipped cream and more fresh fruit. The fruit are the star of the show here and not only are they delicious, they look beautiful on top.

The whole thing should be refrigerated until firm. It’s a fairly large and thick dessert, so I’d recommend letting it sit overnight. Since fruit can get less pretty looking after being cut and sitting, I added the cut fruit on top just before serving. It will soften as it sits out of the fridge too, so I definitely recommend storing it back in the fridge after serving.

The dessert was a hit! It’s so creamy and such a great mix of flavors. I always love a pop of fruit is dessert! Plus, with the fruit in it, it’s my nod towards healthy dessert in January. 🙂 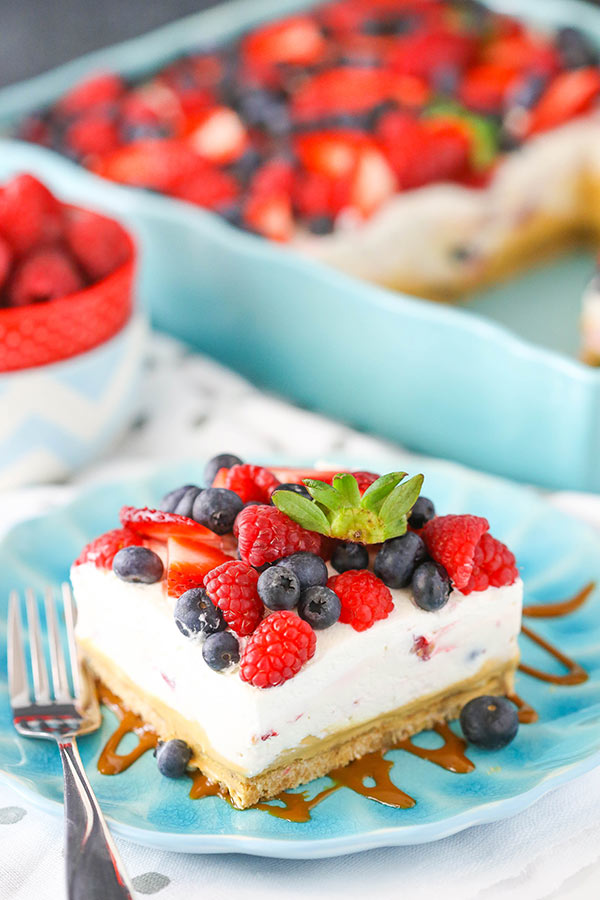 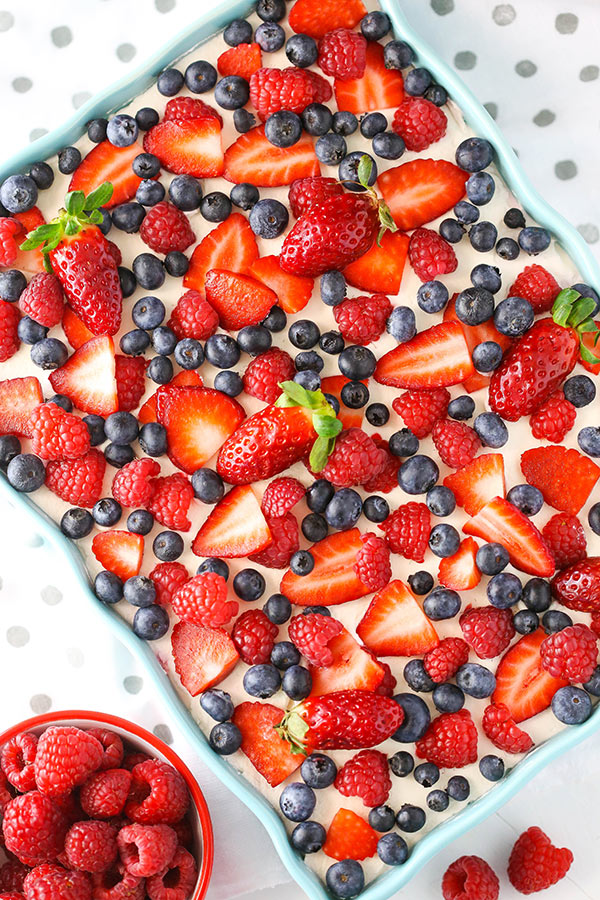 Other Treats to Try

This Berries and Cream Layer Dessert is made with a vanilla cookie crust, dulce de leche and a tasty fruit-filled cream layer! It’s so fresh and creamy, every bite is a little piece of heaven!

I used two 6 oz containers of raspberries, 1 lb container of strawberries and 1 pint of blueberries. Feel free to use a different mix of fruit.

I recommend keeping the dessert refrigerated. It will soften as it sits out at room temperature. 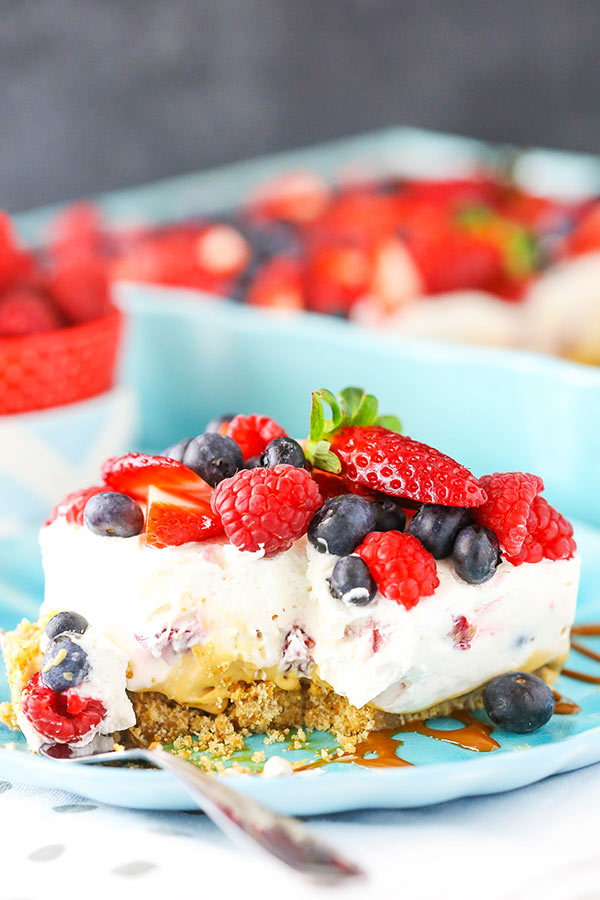