This Coconut Poke Cake is a creamy cake recipe made from scratch. Coconut cake is soaked with sweetened condensed milk and cream of coconut, then topped with coconut whipped cream! It’s a coconut lover’s dream! 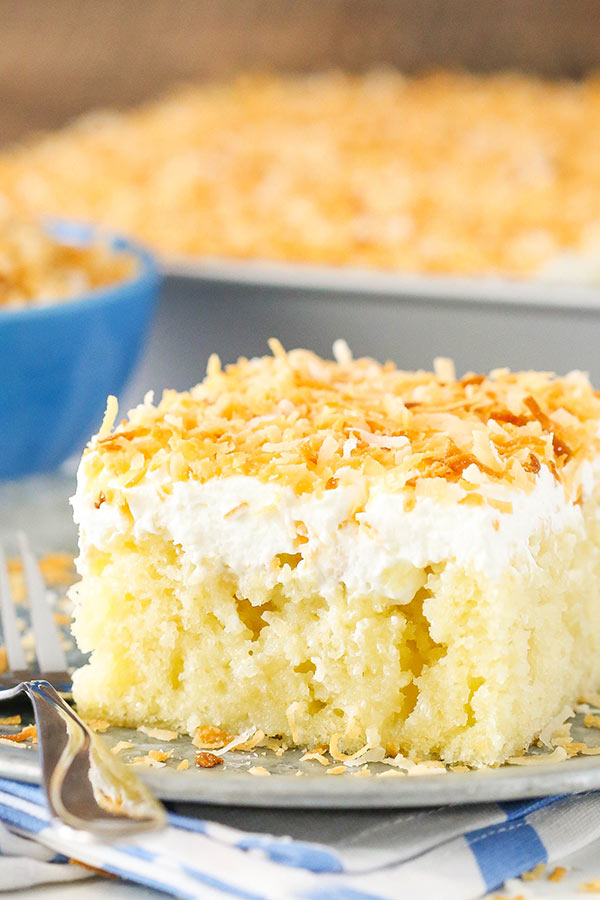 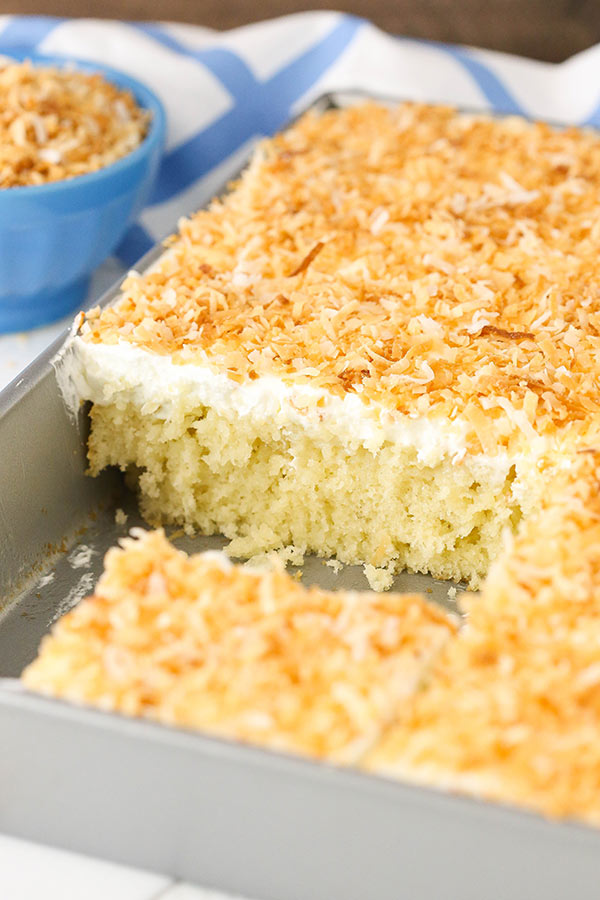 So if you’re a subscriber to my email list and get emails with each new post, then you may remember getting an email in December with a survey about what you’d like to see in 2017. I got such a great response and am SO thankful that so many of you took the time to respond. Yes, there was a giveaway involved, but still. 🙂 The feedback was awesome and there were quite a few things that many agreed on – videos, some flavor suggestions, etc.

One of those suggestions was more coconut flavored things. It’s funny because I totally felt like I had a fair amount of coconut on the blog. I LOVE coconut! Yet when I went and looked I realized there isn’t that much coconut. How could that be?!? I have a Toasted Coconut Chocolate Ice Cream Cake, a Coconut Blondie Cheesecake, a Chocolate Coconut Layer Cake and a few other things that have coconut but aren’t predominately coconut-y and like, that’s it. WHAT?! Although to be fair, there are some pina colada flavored desserts, and honestly isn’t that the best way to eat coconut? 😉

So yea, today I begin to fix the lack of coconut. And I started with this super simple and oh-so-easy poke cake. It’s pure coconut all the way. Lot’s of coconut, a bunch of flavor and ready in a flash! If you need a coconut fix, this is your cake. 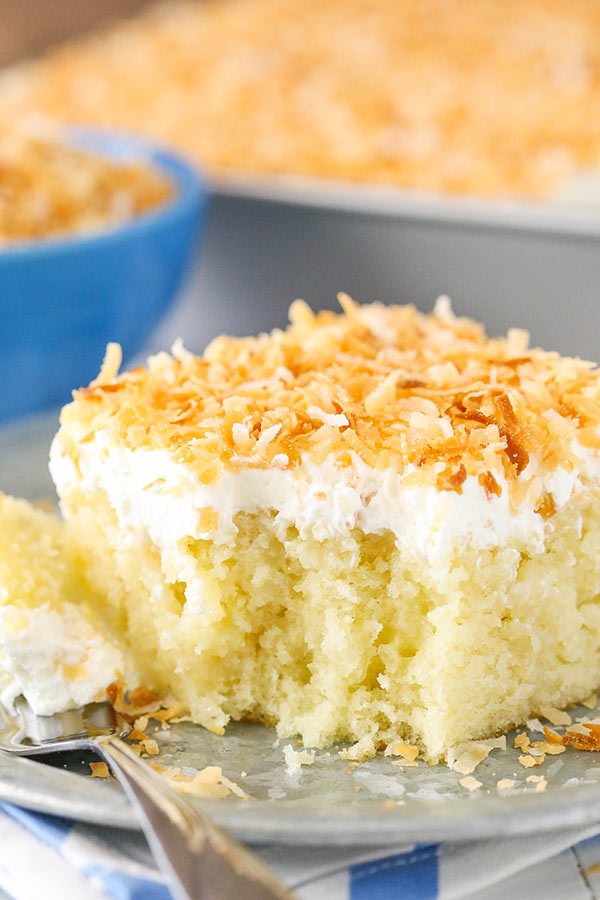 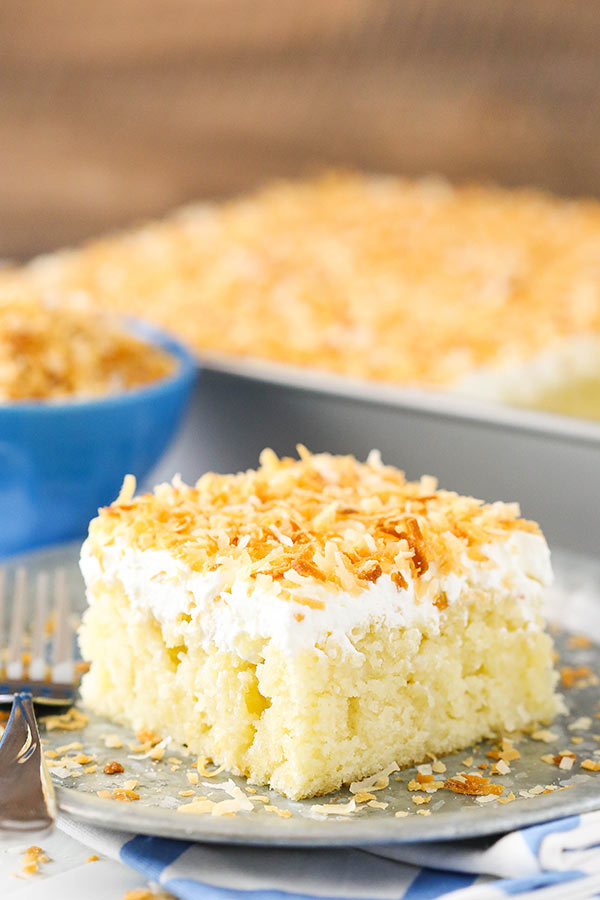 How to Make Coconut Poke Cake

To begin, there’s the coconut cake. It’s totally from scratch, but you could use a box mix if you prefer. Truthfully though, there shouldn’t be any need to. This is basically the easiest cake to put together. Mix together the dry ingredients and wet ingredients separately, combine them, add some water, bake. Bam! You’ve got a super moist and fluffy, delicious cake!

Poke the cake with holes all over (hence the name “poke cake”). I use a big knife sharpener rod – it’s super old school and I don’t even know where I got it – but it’s the best poke cake tool ever. You could use a straw, the end of a spatula handle, whatever you have handy. Just get some holes in there.

Combine some sweetened condensed milk and cream of coconut and pour the mixture over the cake, spreading it all over to make sure some goes in all the holes. This gives the cake even more moisture and even more coconut flavor. I love it! It’s one of the best parts of a poke cake – so moist it’ll stay awesome for daaaayyyssss.

On top of the cake is the homemade coconut whipped cream. Again – super easy. Toss everything in a bowl and whip until you’ve got stiff peaks. You could go the easy route and use a ready made whipped topping and add some coconut flavor, but once you’ve made homemade whipped cream you probably won’t ever go back. Just sayin’.

The cake is topped off with some toasted coconut for extra flavor, texture and because it’s pretty. 🙂 The final cake is to die for! So much coconut, so little time. Grab a fork and dig in! 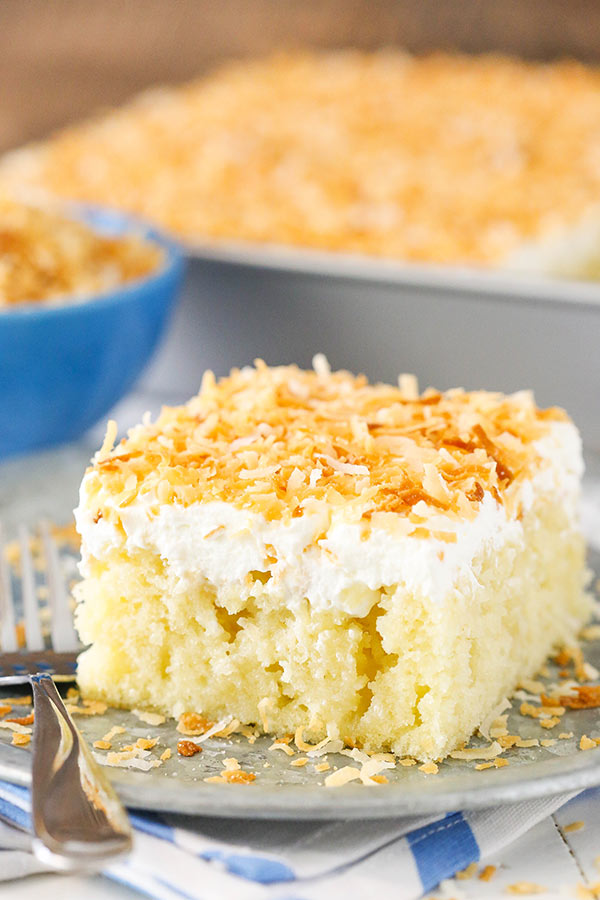 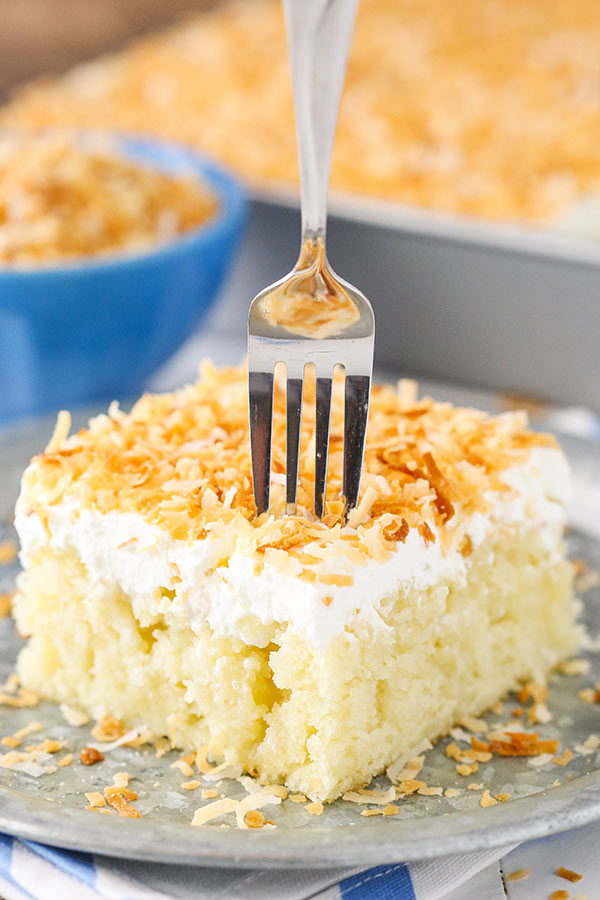 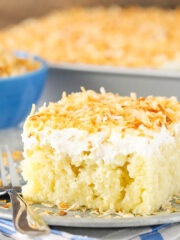 This Coconut Poke Cake is a creamy cake recipe made from scratch. Coconut cake is soaked with sweetened condensed milk and cream of coconut, then topped with coconut whipped cream! It’s a coconut lover’s dream!

1. Preheat oven to 350°F (176°C) and prepare a 9×13 inch cake pan with non-stick baking spray.
2. Add the flour, sugar, baking powder and salt to a large mixer bowl and combine. Set aside.
3. Add the milk, vegetable oil, coconut extract and eggs to a medium sized bowl and combine.
4. Add the wet ingredients to the dry ingredients and beat until well combined.
5. Slowly add the hot water to the batter and mix on low speed until well combined. Scrape down the sides of the bowl as needed to make sure everything is well combined.
6. Pour the batter into the prepared cake pan and bake for 28-30 minutes, or until a toothpick comes out with a few moist crumbs.
7. Remove the cake from the oven and poke holes all over the top of the cake.
8. Combine the sweetened condensed milk and cream of coconut and pour over the top of the cake, allowing it to soak into the holes. Let cake cool completely.
9. To make the whipped cream topping, place the heavy whipping cream, powdered sugar and coconut extract into a large mixer bowl. Whip on high speed until stiff peaks form.
10. Spread the whipped cream over the top of the cake and cover with toasted coconut.
11. Refrigerate the cake until ready to serve. Cake is best for 3-4 days. 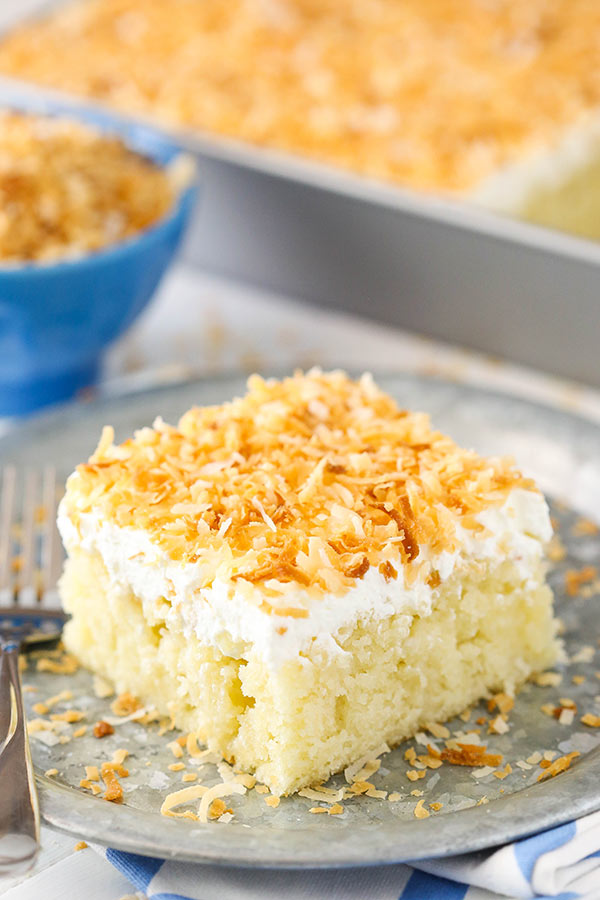 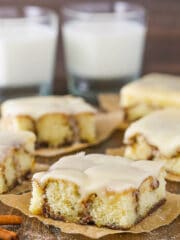 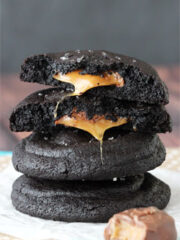