This Funfetti Cake Batter Cinnamon Roll Casserole With Rainbow Chip Icing is made with boxed cake mix for an easy festive breakfast recipe that can also double as dessert! 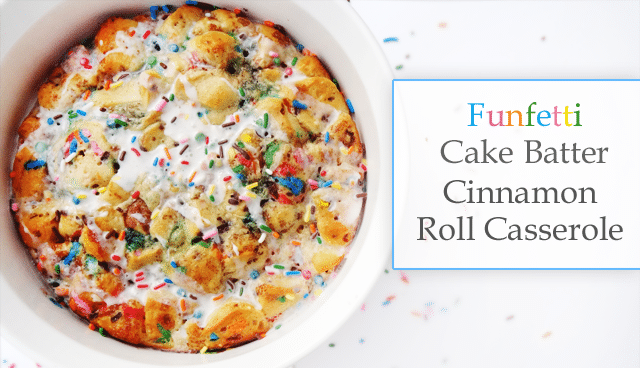 Earlier today, I shared the Overnight Birthday Cake French Toast Casserole with you that I made to celebrate my hubby’s birthday after a crazy week. Now I bring you the other part of our breakfast on Saturday – Funfetti Cake Batter Cinnamon Roll Casserole!

I have been wanting to make the original Cinnamon Roll Casserole from The Dishy Decorator for some time now. I had planned on making it at Christmas time, but with all the chaos never got around to it. Personally, I’m glad that happened because I was able to make it with the Funfetti addition!

I have to say, the hubs was more of a fan of this casserole than the french toast one, but he’s more of a cinnamon roll kinda guy than a french toast kinda guy. As soon as I finished with the pictures, I gave him a bite. His eyes just lit up and he took off with the plate and big smile. 🙂 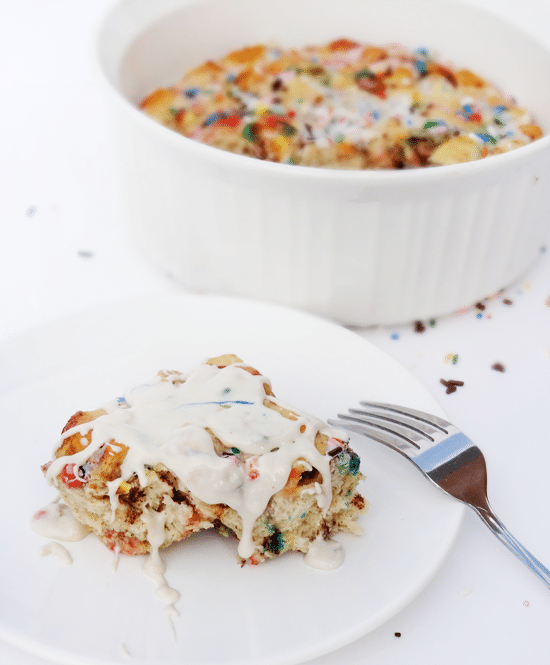 And despite the two casseroles looking fairly similar by picture, they are distinctly french toast and cinnamon roll casseroles. So if you are trying to decide which to make (of course I say go for both), ask yourself – do I feel like cinnamon rolls or french toast? There lies your answer.

And they are both super easy to make. The only difference is that the cinnamon roll casserole is baked right away, instead of sitting for a few hours or overnight. 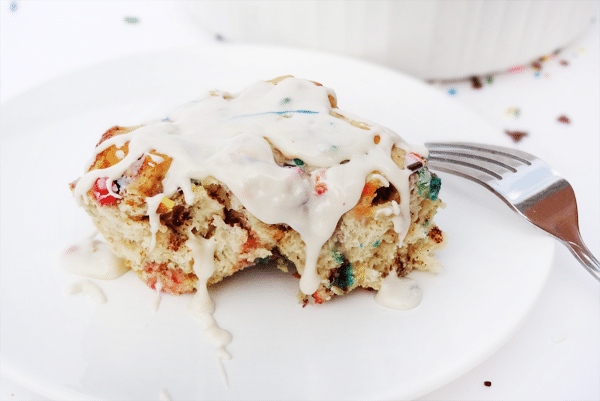 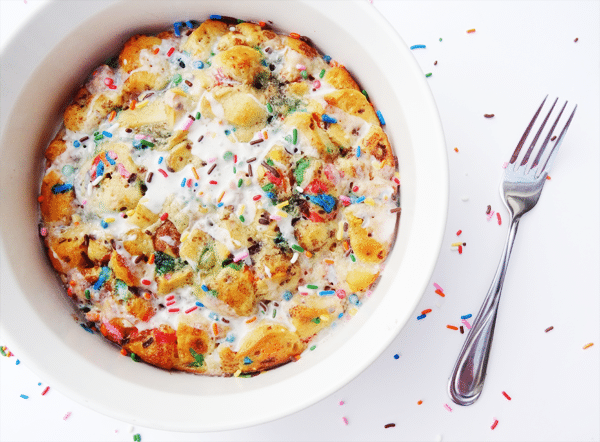 This Funfetti Cake Batter Cinnamon Roll Casserole With Rainbow Chip Icing is made with boxed cake mix for an easy festive breakfast recipe that can also double as dessert!

1. Grease a 13×9 baking dish.
2. Cut each cinnamon roll into 8 pieces. Spread them evenly across the bottom of the baking dish.
3. In a medium bowl, beat eggs. Add in milk, cinnamon, vanilla, funfetti cake mix and sprinkles and mix until well blended.
4. Pour egg mixture over cinnamon roll pieces.
5. Sprinkle a few extra sprinkles over the top.
6. Bake at 375 degrees for 15-20 minutes or until just golden brown.
7. Serve with icing from cinnamon rolls or rainbow chip icing that has been warmed up a little to allow easy pouring.