These Cinnamon Roll Blondies have a brown sugar blondie base with swirled cinnamon roll filling, all drizzled with a delicious icing! I can’t decide if they’re meant for breakfast, dessert or a snack – I think I’ll just eat them all day long! 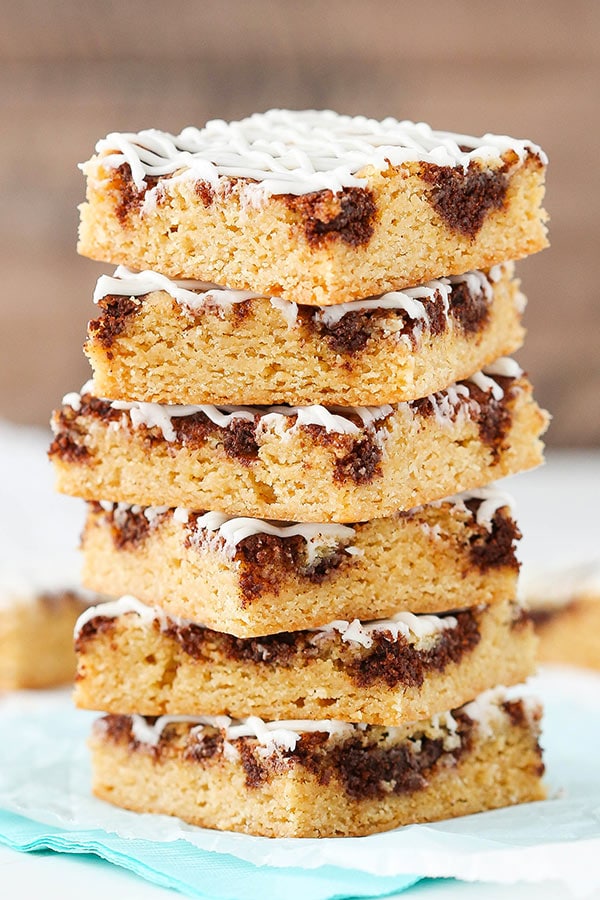 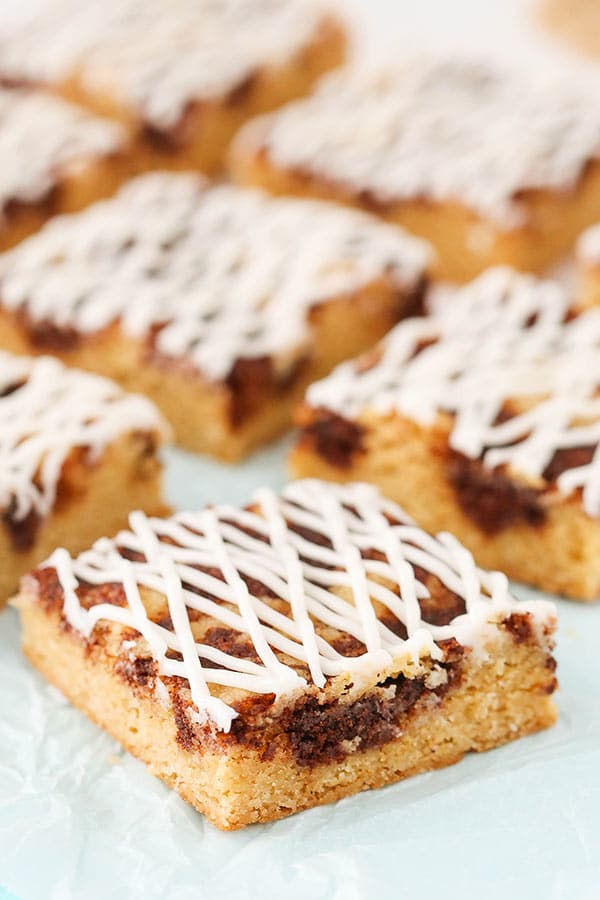 Do you ever hide food from your family so they won’t eat it? You know, because it’s so good that you know if they even know it exists they’ll eat it all before you can and you just can’t live without eating it all yourself?

Well, my brother and I totally did that as kids – usually hiding things from each other. Often it was some kind of cookie or other tasty treat that we wanted to keep to ourselves. I’ve told the hubs this before and he always thinks we’re a bit nuts. Then the other day, it was very clear where we got it from.

My parents were visiting and while they were here, I made these blondies. My mom saw me making them and could smell them as they baked. She informed me that they would be hers once once photos were taken. 🙂 So of course when they were done, I brought them to her so she could have some. She was in love! And because I’m always anxious to get treats out of my house so I don’t eat them all myself, I agreed to let her take them home with her that afternoon.

Shortly after that conversation, my dad walks into the kitchen. Knowing he’s a cinnamon lover and general dessert nut, like myself, I brought over the plate of cinnamon roll blondies so he could try one.

I was IMMEDIATELY reprimanded by my mother who thought she’d made it clear that they were HERS! Dad wasn’t supposed to even know about them because now he was going to eat them all!

I’ve never seen someone jump up so fast and pack away food in my life. 🙂 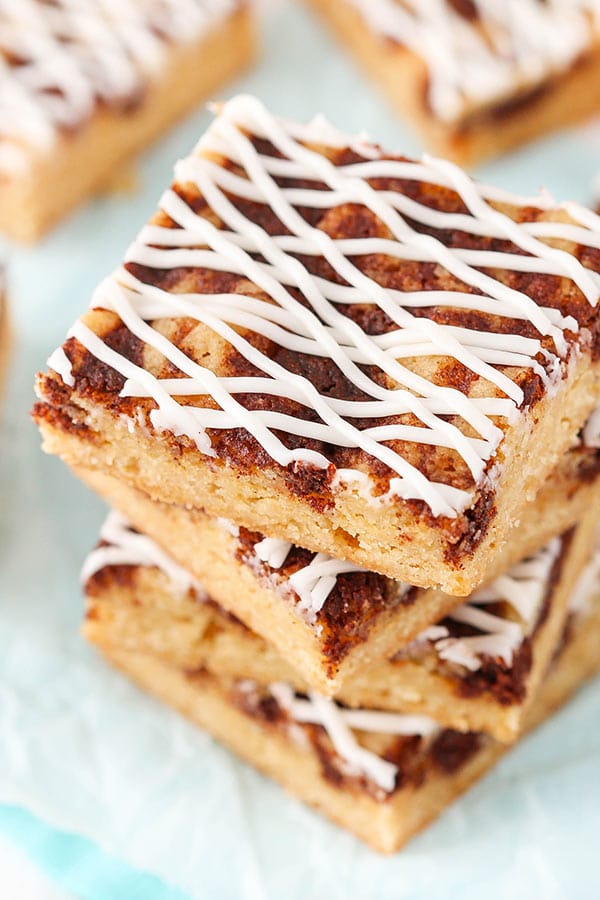 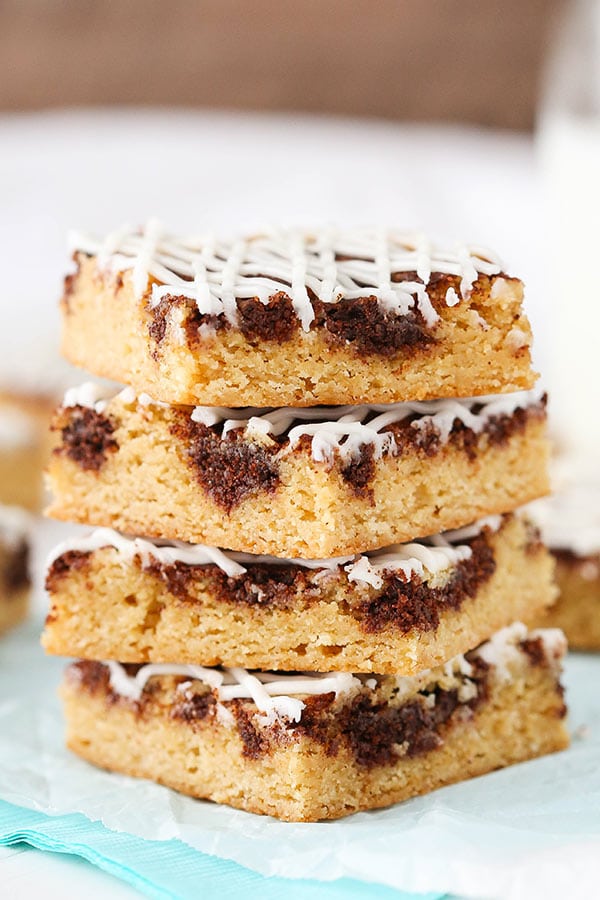 So if you were wondering – that’s how good these blondies are. You will want to hoard them all for yourself. Tell your daughter, so she doesn’t try to give some away. Ha!

How to Make Cinnamon Roll Blondies

If their irresistible lure wasn’t enough, they are super easy to make! That way, if someone does steal them from you, you can easily make batch #2. Though you will have more than one bowl to clean, there’s no need to pull out a mixer. The blondie ingredients can all be combined with a whisk and poured into the pan.

The cinnamon filling is similar – combine it all and drop bits of it over the blondie batter. I used a toothpick to swirl it around the top of the batter.

Once they are baked, they are topped with one of my favorite vanilla icings. Unlike some glazes, this icing holds it’s icing-ness and shape and doesn’t get soaked up by the bars. It’ll stay nice on top of the bars and tastes just like a cinnamon roll frosting. It’s so perfect! It’s cooked on the stove, but doesn’t take long. Once all the ingredients are cooked, slowly add the powdered sugar. The amount of powdered sugar you add determines how thick the icing gets, so add it slowly to make sure it doesn’t get too thick. The icing will also thicken as it cools. If it does happen to get a touch thick, just add a touch more water or milk to thin it back out.

I can’t wait for you to try these babies! They are so good, you’ll fight your husband for them! 😉 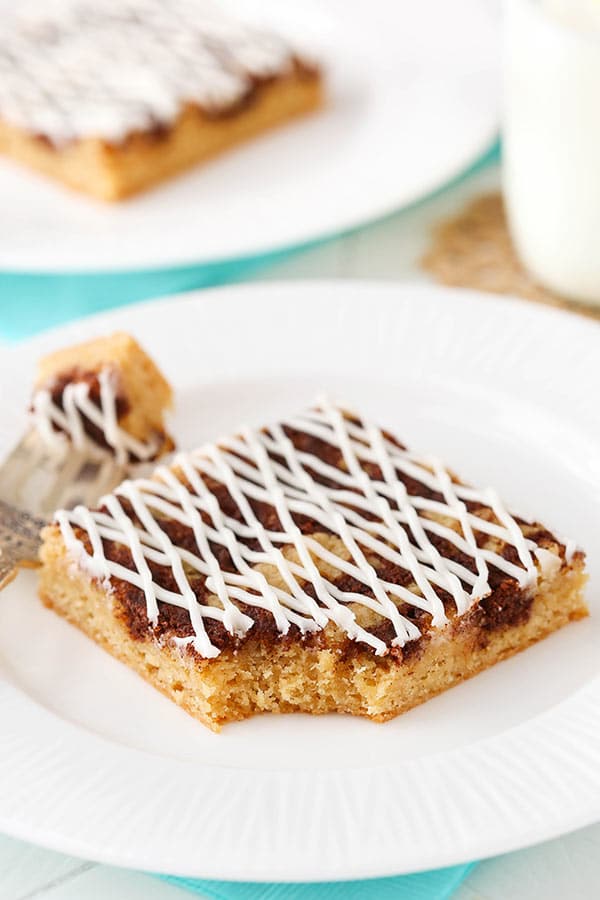 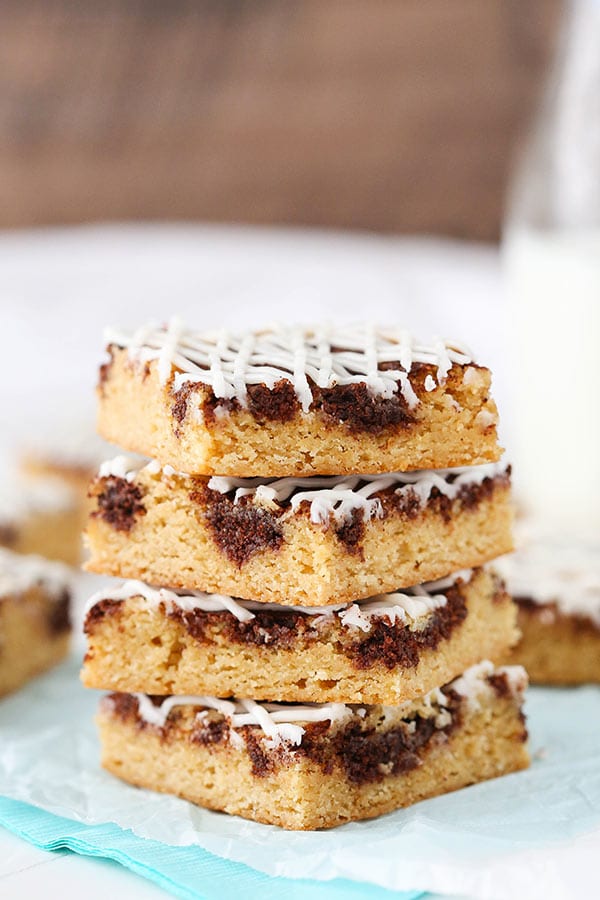 These Cinnamon Roll Blondies have a brown sugar blondie base with swirled cinnamon roll filling, all drizzled with a delicious icing! I can’t decide if they’re meant for breakfast, dessert or a snack – I think I’ll just eat them all day long!

1. Preheat the oven to 350°F (176°C) and line a 9×13 pan with parchment paper or aluminum foil, with enough sticking over the sides that you can use it to remove the bars from the pan later.
2. To make the blondie base, melt the butter in a microwave safe bowl, then transfer to a mixing bowl.
3. Add the brown sugar and whisk to combine.
4. Add the vanilla extract and eggs and whisk until well combined.
5. In another bowl, combine the flour, baking powder and salt.
6. Slowly add the dry ingredients to wet ingredients and mix until combined.
7. Spread the batter evenly into the prepared pan. Set aside.
8. In another small bowl, make the cinnamon filling. Combine the brown sugar, cinnamon and melted butter.
9. Drop/drizzle the filling over the top of the blondie and run a toothpick around the top of the blondie batter to drag the filling around and incorporate it into the top of the blondie.
10. Bake for 18-20 minutes, or until the edges are lightly browned.
11. Remove from the oven and allow to cool.
12. To make the icing, combine all ingredients except for the powdered sugar in a small sauce pan. Heat on low until sugar is melted, then turn heat to medium to bring to a boil.
13. Boil for 3 minutes, stirring occasionally, then remove from heat and immediately pour into a heat-proof glass bowl.
14. Slowly whisk in the powdered sugar until thick enough, but still thin enough to drizzle, and allow to cool slightly and thicken. If you find your icing to be a little thick, just add a touch more water to thin it back out.
15. Drizzle the icing over the blondies, then use the paper lining the pan to remove the blondie from the pan.
16. Cut into bars and serve.