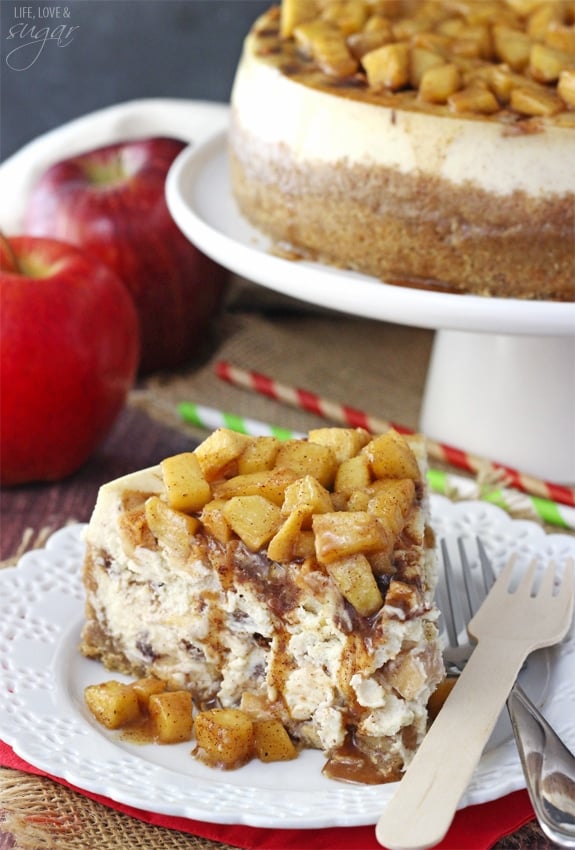 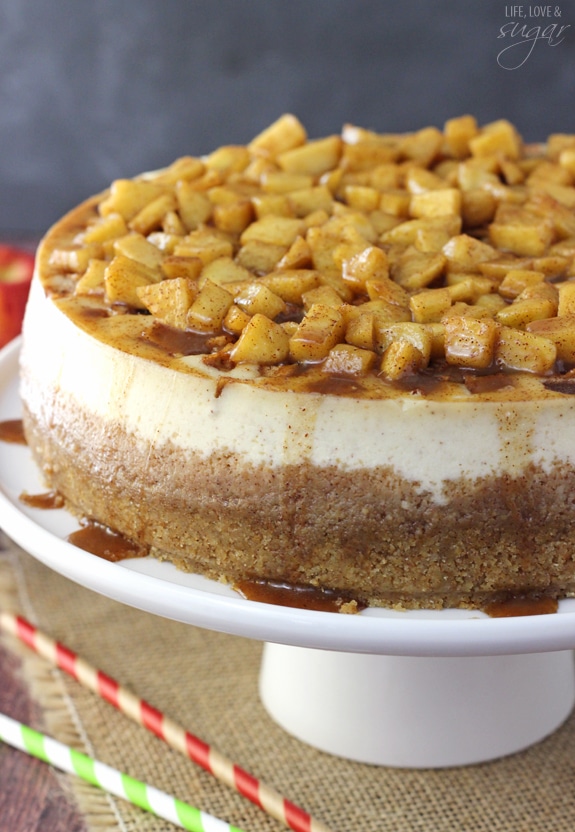 This post is sponsored by KitchenAid, but all opinions are my own.

I don’t know about you, but I am really starting to get excited for fall. Apple baking always seems to get me in the mood. I start breaking out the cinnamon, nutmeg and caramel and just can’t wait to devour it all over some delicious apples!

Enter this cheesecake. While I left out the caramel, I absolutely considered drizzling some over the top of it and you should consider it too.

But even without it, the cinnamon and apples are pure fall heaven.

Making the cheesecake takes some time, but really is easy to put together. That’s one of the great things about cheesecakes. Once it’s baked, you’re pretty much done. No fuss, just put it in the fridge to cool and top it with something tasty – cinnamon apples in this case.

To make the crust, I started with vanilla wafer cookies. I love the extra sweetness from using them, but graham crackers would absolutely work too if you have them on hand. I added some brown sugar and cinnamon to the crust to the extend the fall flavors into the crust and I loved it! 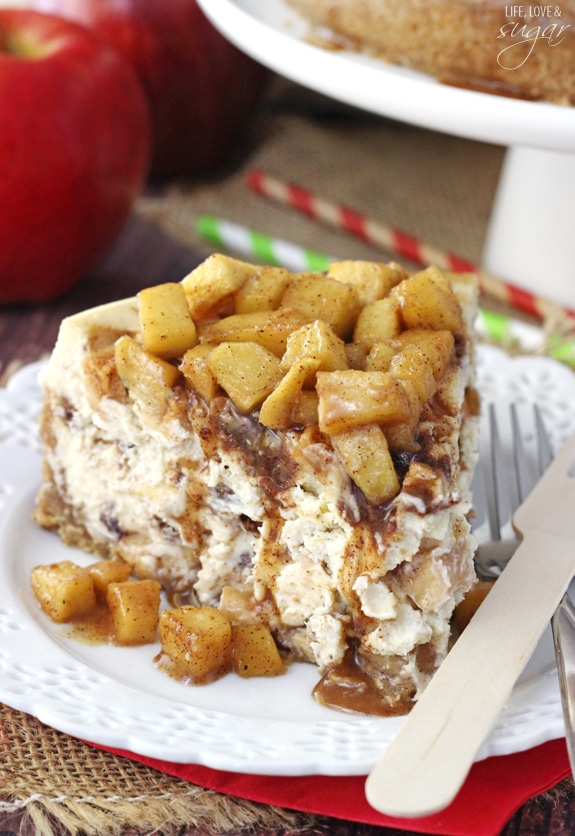 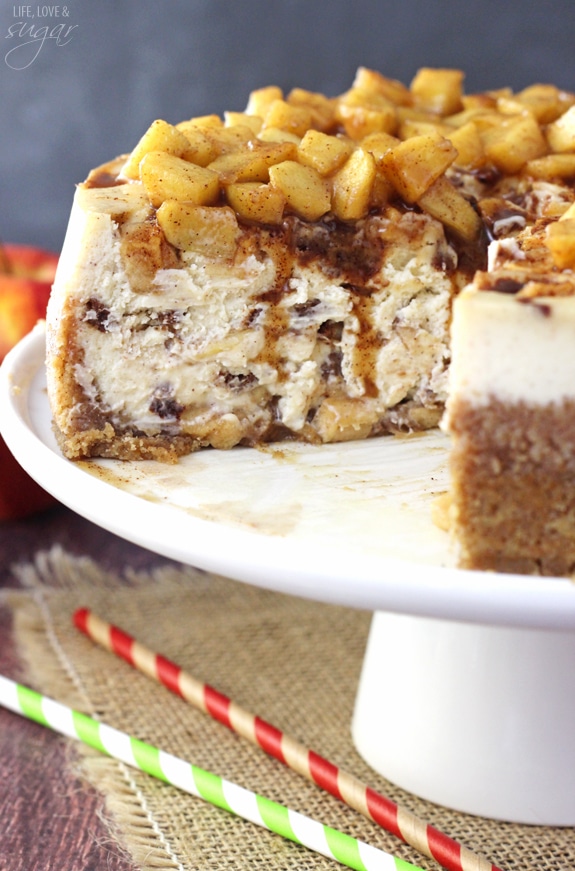 The cheesecake filling is fairly straightforward, it just has a little cinnamon in it. The real fun comes from layering the filling with the cinnamon filling and apples. OMG!

How to Assemble Your Cheesecake

Once baked and cooled, the cheesecake is topped with more cooked apples. The process for making the apples on top of the cheesecake is pretty similar to the ones inside, except you add a little butter and cook them for about 10 minutes. You could skip this step, but the additional apples really finish off the cheesecake nicely.

You’ll want to chop the apples, add them to the pan with the brown sugar, lemon juice, cinnamon, nutmeg and butter, then cook them until they reach the right consistency. I say about 10 minutes, but you could cook them for more or less time depending on how soft you want them. 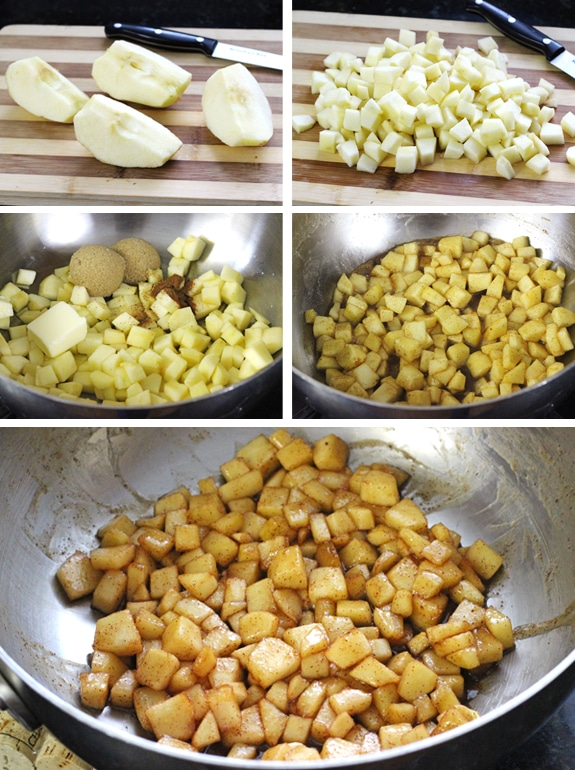 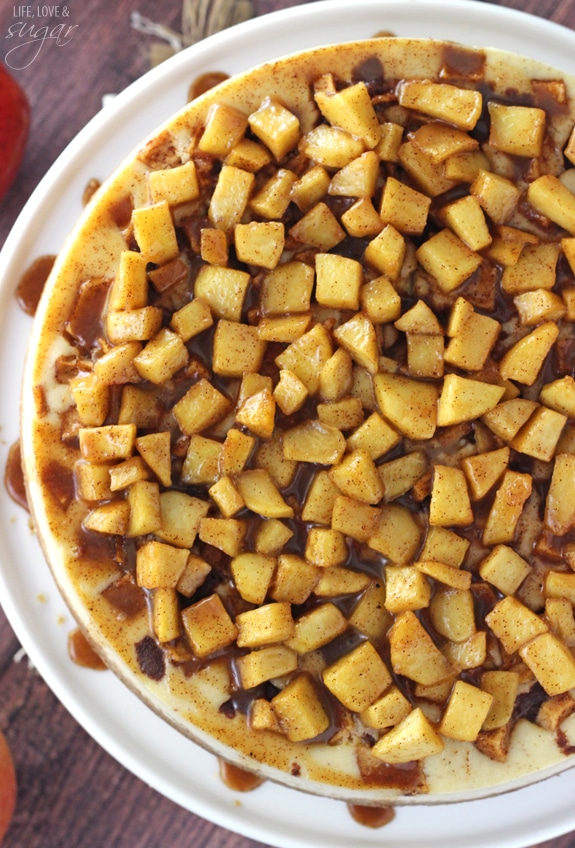 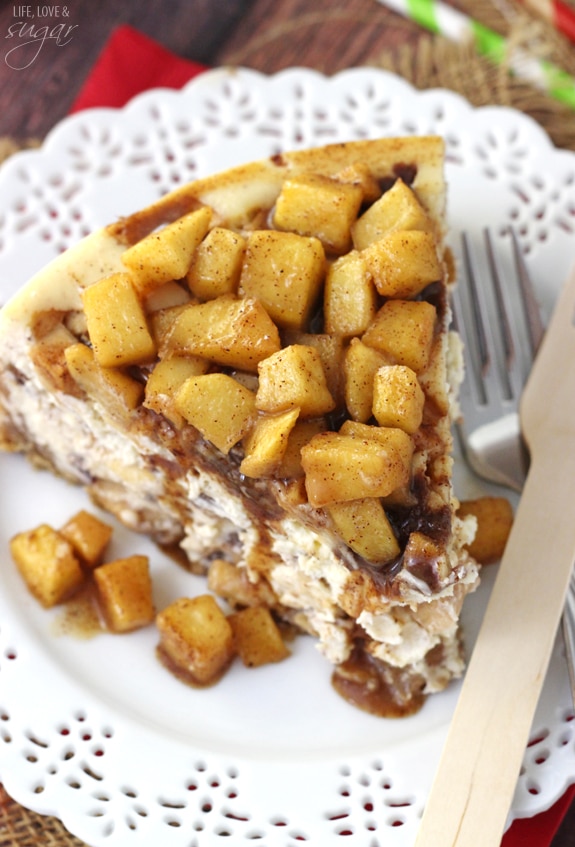 And to spice up your fall even more KitchenAid and The Food Network have teamed up to host the Apple Challenge!

That’s right – Food Network Kitchens will select the top 4 recipe submissions and the 4 finalists will win a trip for 2 to NYC for a live cook-off to cook their dish to be judged by Food Network chef Geoffrey Zakarian. One winner will receive the grand prize of a suite of KitchenAid Black Stainless Steel Appliances and a private cooking lesson with Geoffrey Zakarian. 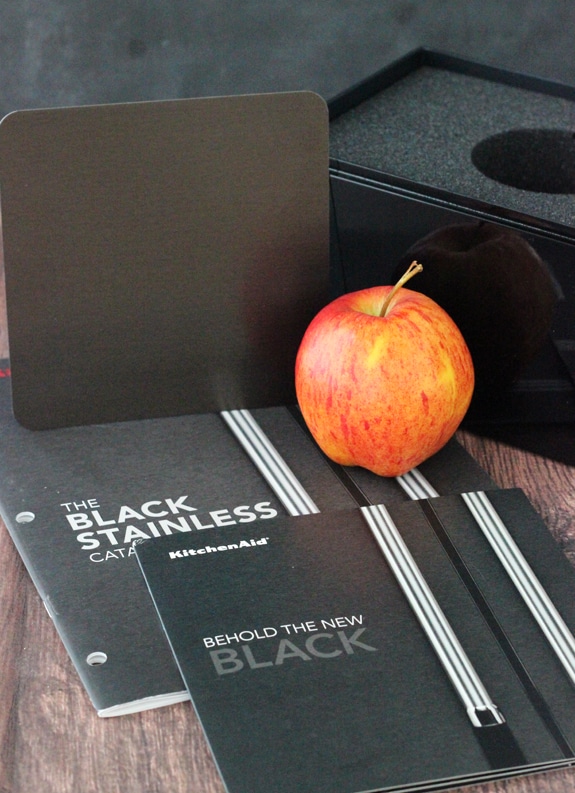 The contest ends September 14, so you better get on it! Submissions can be uploaded through Twitter or Instagram (with the hashtag #KitchenAidContest), FoodNetwork.com/applechallenge or food.com/applechallenge. And if you win, let me know so I can be super jealous.

And if you don’t win, don’t worry. We can drown our sorrows together in this amazing cheesecake. I’m pretty sure all the apples in it make it healthy, so win-win right there. 😉 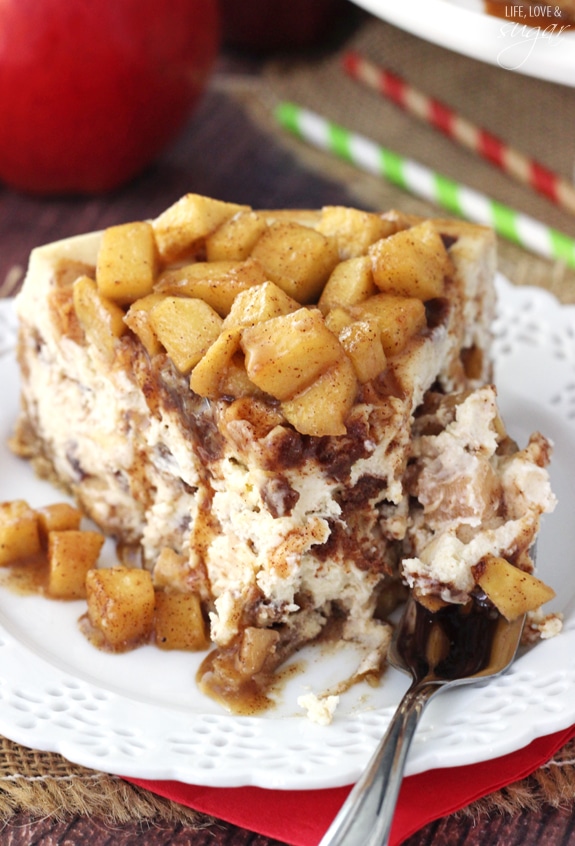 APPLE GARNISH, ON TOP OF CHEESECAKE

1. Heat oven to 325°F (163°C).
2. In a small bowl, combine crust ingredients and mix well.
3. Press mixture into the bottom and up the sides of a 9-inch springform pan.
4. Bake crust for 10 minutes then remove and set aside.
5. Cover the outsides of the pan with aluminum foil and set aside.

1. Reduce oven to 300°F (148°C).
2. In a large bowl, mix the cream cheese, sugar and flour until combined (Use low speed to keep less air from getting into the batter, which can cause cracks). Scrape down the sides of the bowl.
3. Add eggs one at a time, beating slowly and scraping the sides of the bowl after each addition.
4. Add the sour cream, vanilla extract and cinnamon. Beat on low speed until well combined. Set aside.
5. In another medium sized bowl, toss together apples, brown sugar, cinnamon and nutmeg until apples are coated. Set aside.
6. In another medium bowl, whisk together brown sugar, cinnamon and flour. Stir in melted butter until combined.
7. Add about 1/3 of the apples to the bottom of the crust.
8. Break apart cinnamon mixture and sprinkle pieces over the apples, about 1/3 of the cinnamon mixture.
9. Spread about 1/2 of the cheesecake filling over the cinnamon mixture.
10. Add another 1/3 of the apples and cinnamon mixture to the top of the cheesecake filling.
11. Spread remaining cheesecake filling over cinnamon and apples.
11. Sprinkle remaining apples and cinnamon mixture over top of cheesecake.
11. Place springform pan (covered with aluminum foil) inside another pan. Fill outside pan with enough warm water to go about halfway up the sides of the springform pan. The water should not go above the top edge of the aluminum foil on the springform pan.
8. Bake for 1 hour and 30 minutes.
9. Turn off heat and leave cheesecake in oven with door closed for 30 minutes.
10. Crack oven door and leave the cheesecake in the oven for about 20 minutes.
11. Remove cheesecake from oven and chill until completely cool and firm.
12. To make the apple garnish for the top of the cheesecake, add chopped apples, brown sugar, cinnamon, nutmeg, lemon juice and butter to a pan. Stir together until apples are well coated.
13. Cook apples on medium heat until at desired tenderness, about 10 minutes.
14. Remove cheesecake from springform pan and place on serving plate. Add apples to the top of the cheesecake and drizzle remaining sauce from pan over cheesecake.
15. Refrigerate until ready to serve. 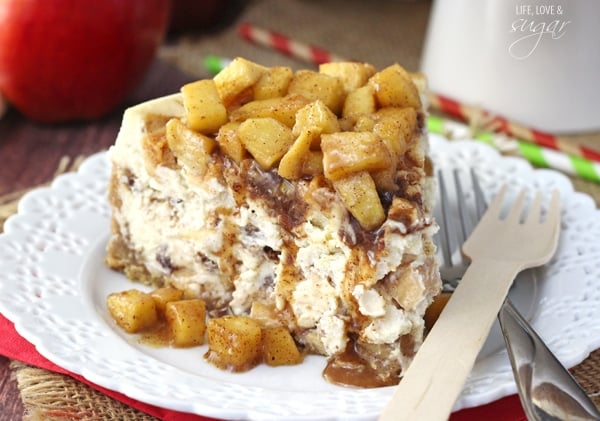 From the first-ever black stainless steel to the first-ever five-door refrigerator, KitchenAid pushes the limits with our appliances, so our home cooks can do the same with their cooking. See the revolutionary new line of KitchenAid appliances or visit the Kitchenthusiast™ blog for recipes, tips and more.

This is a sponsored conversation written by me on behalf of KitchenAid. The opinions and text are all mine.