These Apple Cinnamon Oatmeal Cookies are among my favorite cookies of all time! These chewy cookies are a classic fall dessert with flavors that taste amazing year round! I could eat these cookies every day! 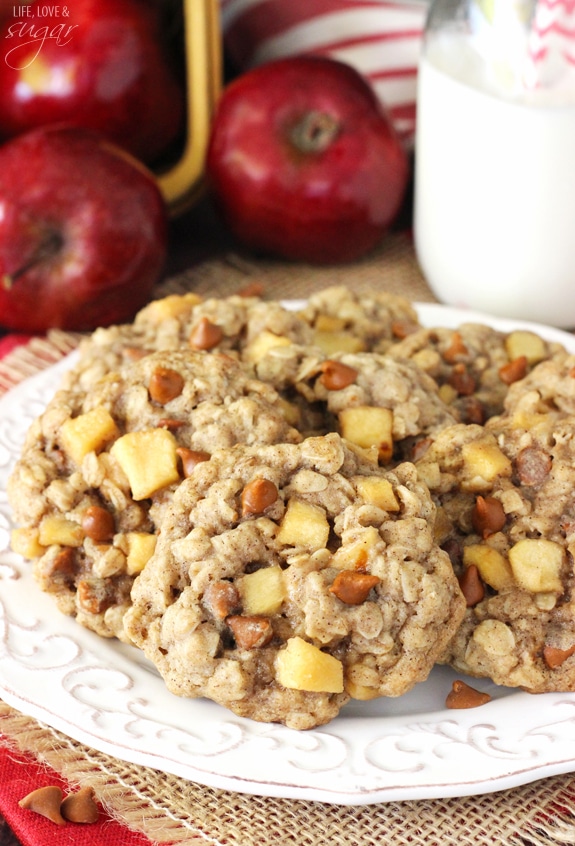 We had quite a bit of rain yesterday. Then last night when our church group was over (we meet on Wednesday nights) it was storming again, but this time with thunder and lightening and the whole bit. The next thing we knew the lights were flickering and eventually went out.

Fortunately, we already had a candle lit. It’s a new wine scented candle that the hubs loves. 🙂

So I went and grabbed more candles to light and it reminded me of how much I’ve always thought losing power was kind of fun. I always associate it with a sense of peacefulness. I mean, when the power is out things kind of slow down and temporarily so does life. What a wonderful thing!

The hubs and a couple other guys went out to the front of the house and apparently there was a lot of lighting. Craziness!

A few minutes later the lights came back on and the fun was over. 🙁

Then we dug into dessert. Not these cookies – they were baked weeks ago. But they feasted on the treats I’ll be posting in a few weeks.

Sadly they never got to try these cookies. I made them when my dad was in town, knowing that he loves apple and cinnamon as much as I do. He was staying at my brother’s house, but as soon as he came over and tried these cookies, he pulled out a bag to package them and take them with him. No intention of sharing.

Clearly I take after him when it comes to desserts. 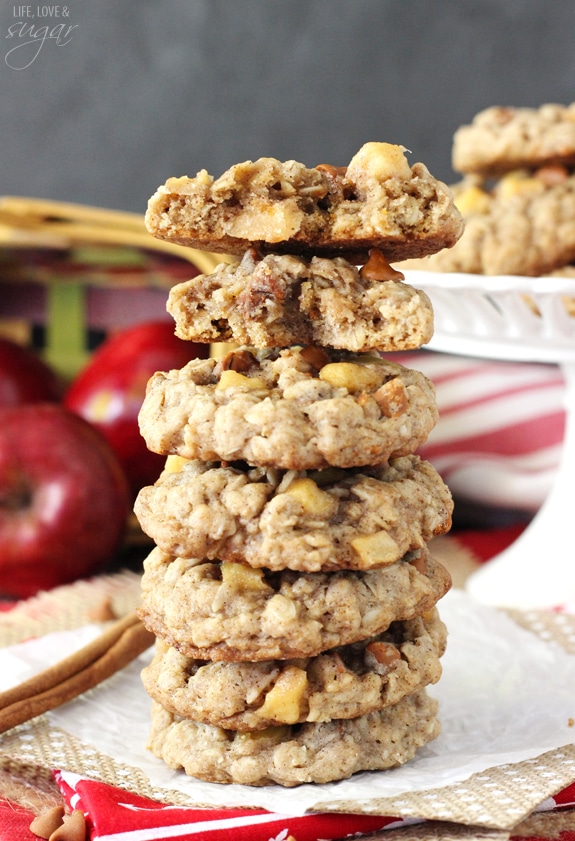 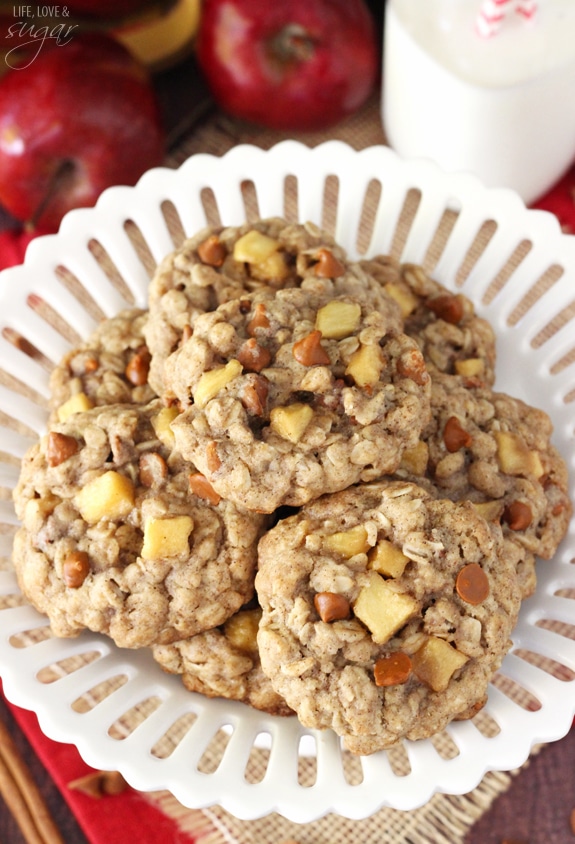 These cookies are really quite easy to make. I decided to cook the apples a little bit before adding them to the cookie dough. I wanted to make sure that they were tender enough and they came out perfectly.

And oatmeal pairs so wonderfully with the apple. I will take a good oatmeal cookie over a regular one any day. Plus, oatmeal + apple = healthy, right? 😉

And the cinnamon chips? Well they’re amazing. In fact, my parents were in love with them in these cookies! I think they might have been my dad’s favorite part. Loved them!

One ingredient you might notice seems strange is the cornstarch. Don’t leave it out! Just like cornstarch acts as a thickener it sauces, it has a similar function in these cookies. It keems them from spreading too much and ending up a thin, crunchy cookie. The result is a thick, soft, chewy cookie. The best!

The cookie dough can be a bit sticky because of the apples, but it will form nice balls of dough. Bake the cookies until the edges are lightly golden and the centers look mostly done. The center will still look a touch undone, but will continue to cook as they cool and stay moist and delicious!

These cookies really were a hit! Before my dad got his hands on them, my mom, grandmother and the hubs totally died over them too. If you want a tasty fall cookie, this is definitely a winner! 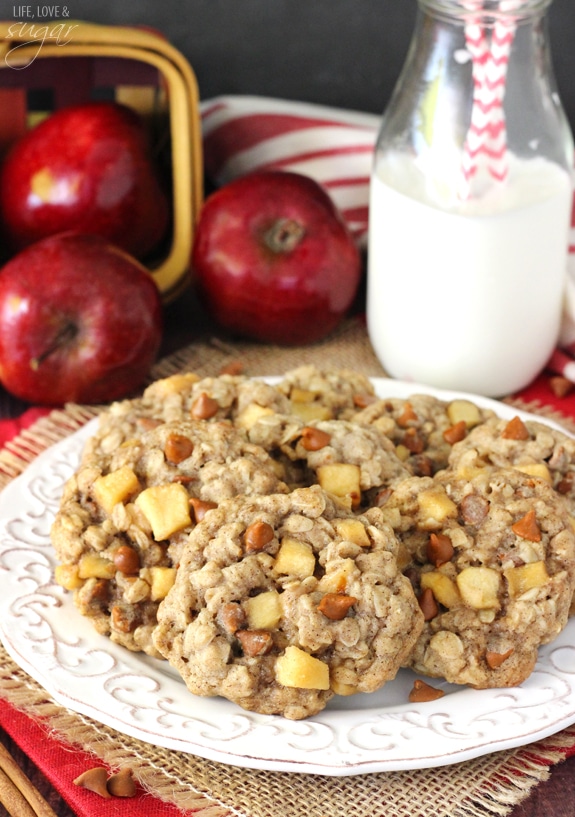 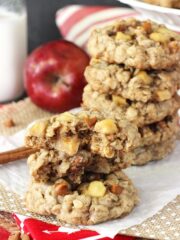 These Apple Cinnamon Oatmeal Cookies are among my favorite cookies of all time! These chewy cookies are a classic fall dessert with flavors that taste amazing year round! I could eat these cookies every day!

1. Melt 1 tablespoon of butter in a pan over medium-low heat. Add apples, sugar and cinnamon and stir to combine.
2. Cook for about 10 minutes, stirring occasionally. Remove from heat and set aside until ready to use.
3. Preheat oven to 350 degrees.
4. Cream butter and sugars together until light and fluffy, about 2-3 minutes.
5. Mix in egg and vanilla extract.
6. Add cinnamon, flour, cornstarch and baking soda to a medium sized bowl and combine.
7. With the mixer on low speed, add flour mixture to butter mixture.
8. Stir in old fashioned oats and cinnamon chips. Dough will be thick.
9. Stir in apples (don’t add the sauce from the apples).
10. Make dough into balls of about 2 tbsp. Flatten them out a bit and place on cookie sheet covered with parchment paper or a silicone baking mat.
11. Bake for 10-11 minutes. They should be slightly golden on the edges and look a little underdone in the center.
12. Remove from oven and allow to cool for a couple minutes before putting on a cooling rack. The center of the cookie will finish cooking as it cools. 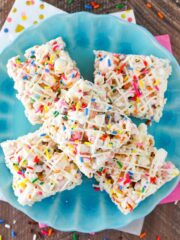 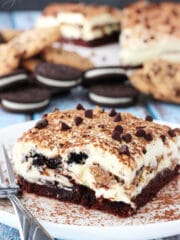 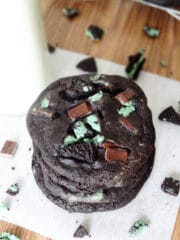