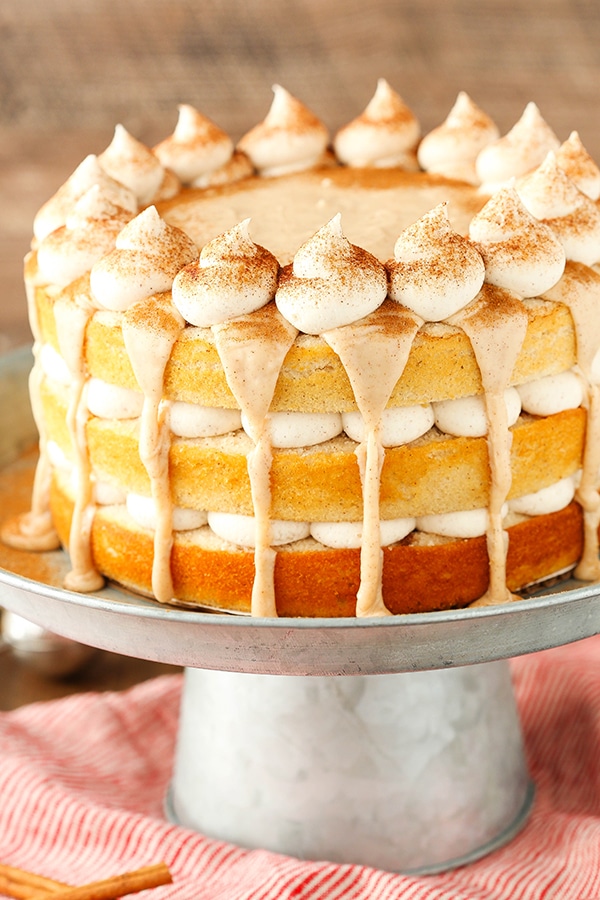 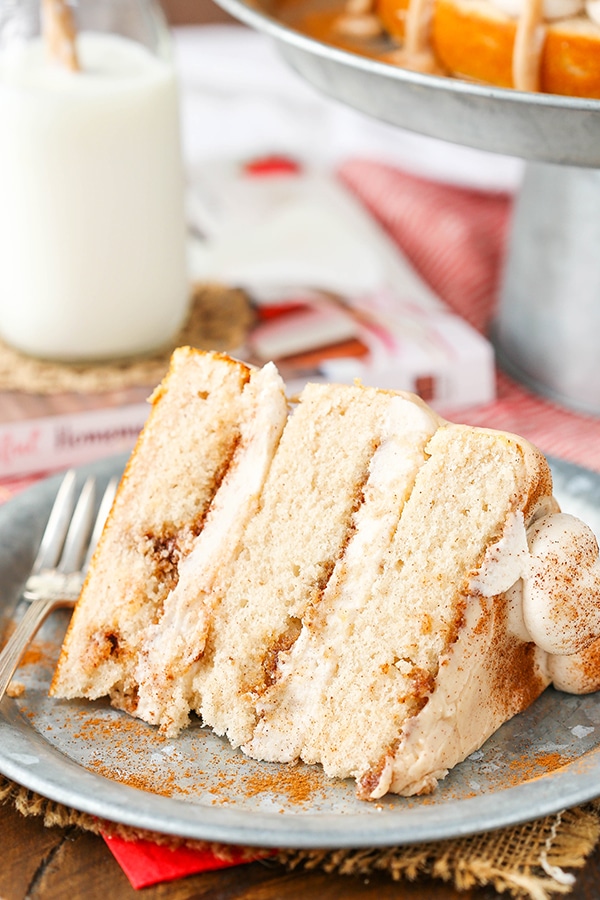 So yesterday was the day! My cookbook, Simply Beautiful Homemade Cakes, is officially out there for everyone to see, buy and bake from! This is what it’s all about you guys. I didn’t write a cookbook for myself – I wrote for you! The best part of yesterday was hearing from anyone who has gotten a cookbook in the mail and was excited about it. I love seeing the posts/comments/emails – it makes my day!

If you’re wondering what I did to celebrate, the answer so far is not too much. Tuesdays are a tough day, but I did pop some bubbly with the hubs Monday night and since we had our church group last night, I took some bubbly with me to that too. 🙂 We’ll be celebrating more formally in a little less than two weeks, when I host a little par-tay.

The other thing I’m looking forward to is going to the bookstore to see it on the shelf! I had really wanted to do that yesterday but the hubs was super busy with work. He left before I woke up and got home late. I could’ve gone to the store without him, but he would’ve been super disappointed and I would have been too. As much as I was the one to actually write this book, it took both of us for it to happen and he should be with me. Hopefully today we’ll get to go together. 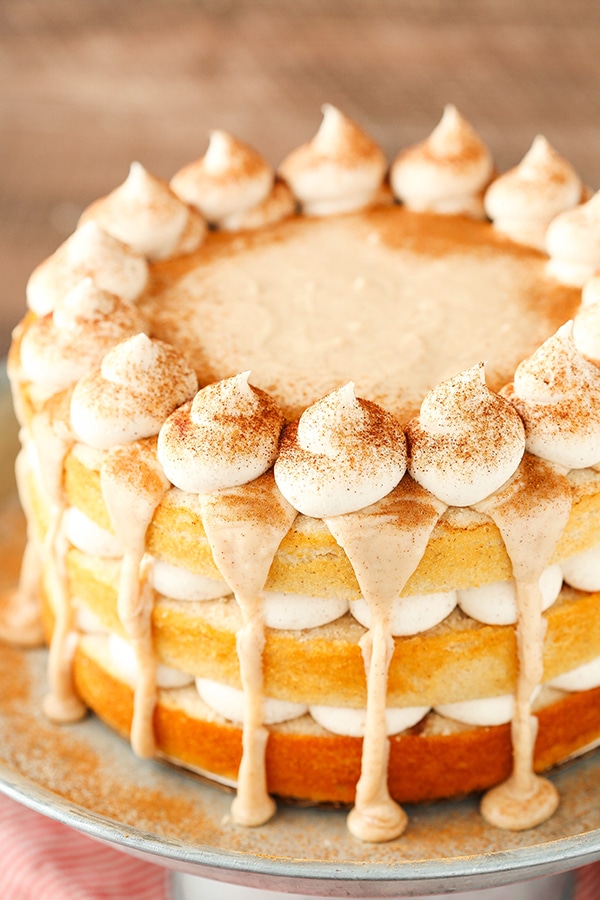 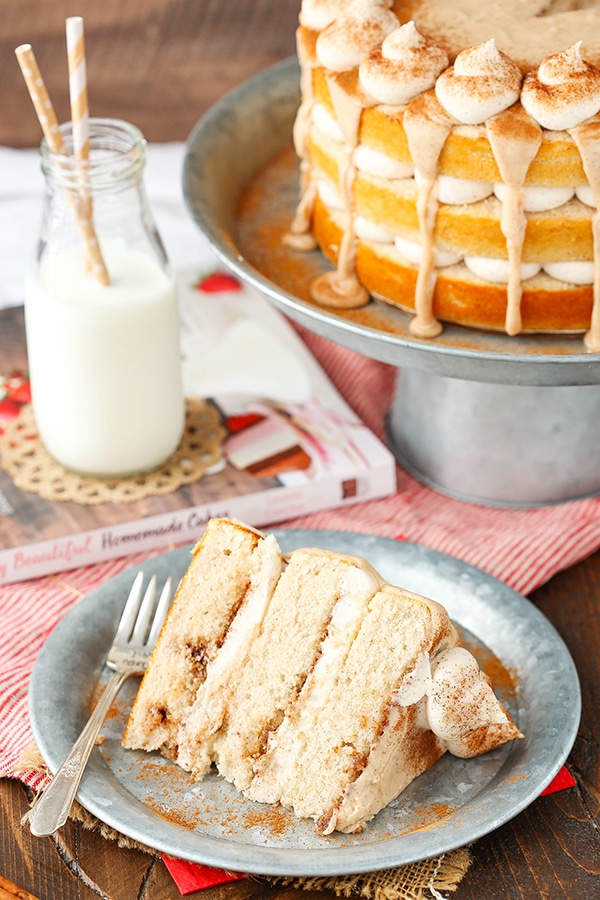 The challenge for me with this cake was the cinnamon sugar glaze on the cakes. That part took a little time to get right. It seems simple enough, doesn’t it? It’s basically like cinnamon roll filling. Butter, sugar and cinnamon. Done. Right? No. Not right. 🙂

I didn’t just want to spread melted butter over the cake. That just seemed like too much and super buttery. I love butter, but that’s not really what I was going for. So I played around with it quite a bit. I honestly don’t even remember all the different versions I went through but I can tell you the first several versions ended up super sticky (they were cooked on the stove first). You guys trust me when I tell you now that it’s just right! It is the best part of the cake – so cinnamon roll-y! 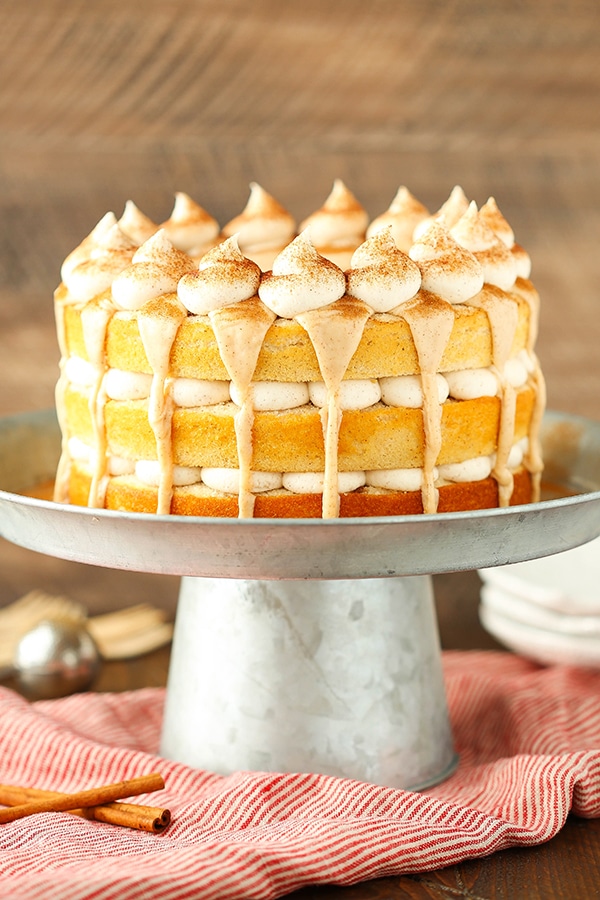 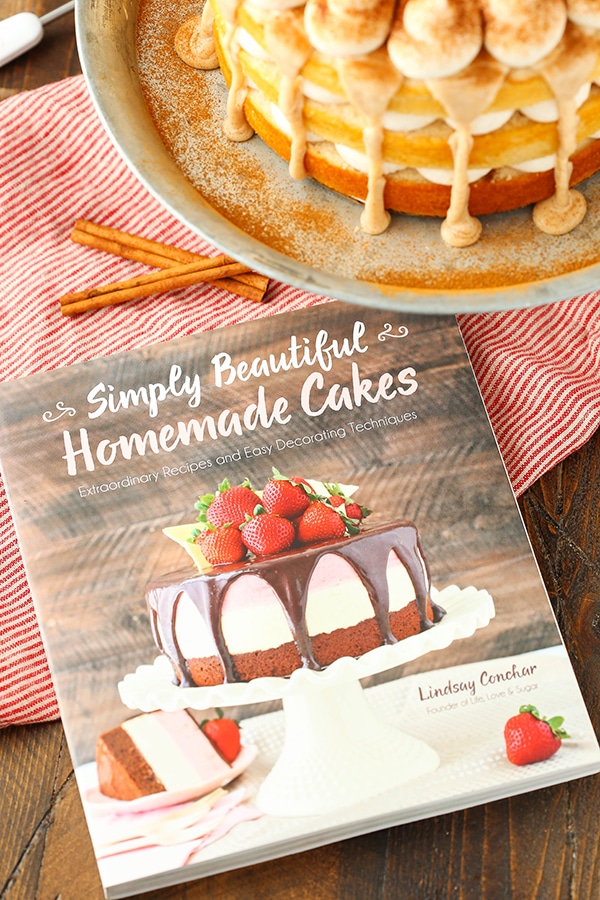 If you already have the cookbook in your hands (yay and thank you!!) then you’ll see that I decorated this cake differently than in the book, which is fully frosted. A big part of the concept of the cookbook is that you can use the decorating tutorials to decorate the cakes in it any way you want. The way I chose to decorate the cakes should only be seen as a suggestion. Check out all the fun tutorials and apply different ones to different cakes – like I did with this one. 🙂

And since this version is “naked” I needed a drizzle. I grabbed the icing from the Root Beer Layer Cake (on the following page in the book) and altered it a bit to make it cinnamon, instead of root beer. I am IN LOVE with it on this cake! Perfection! 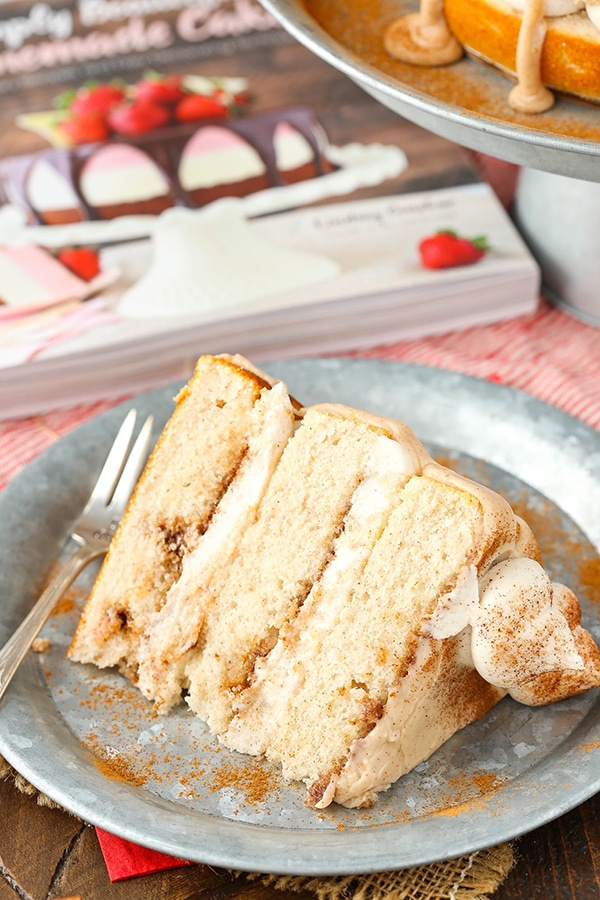 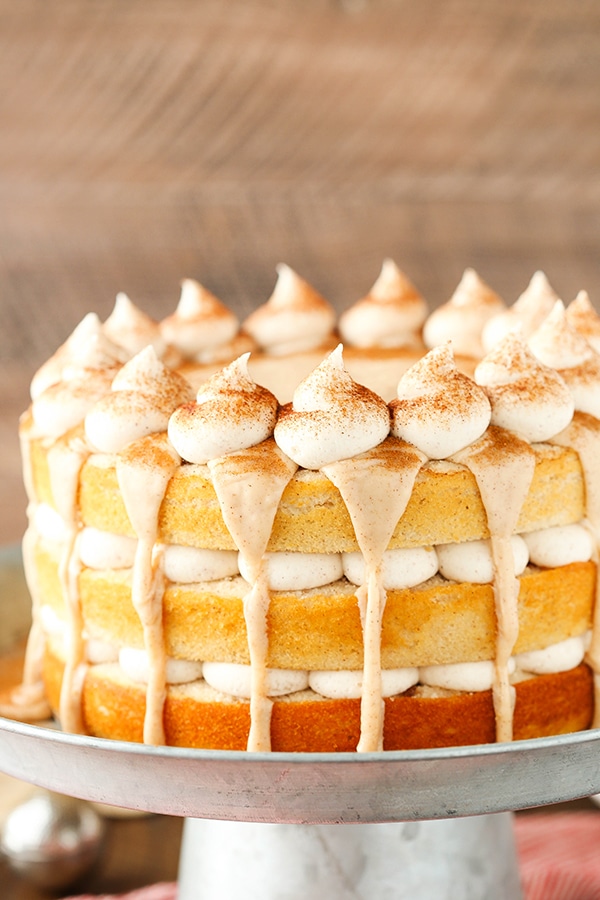 The frosting technique between the cakes layers is fairly simple to do as well (and there are photos in the book!). Just pipe dollops around the edge (I use the Ateco 808 icing tip), smooth off the tops a bit and add the next cake layer on top. Just try to make sure that your dollops are about the same size/height so that the next layer of cake sits evenly.

The final cake really is to die for! My mouth is watering just thinking about eating it again. 🙂 You’ll definitely want to try this one!

And if you haven’t already, be sure to check out the cookbook – Simply Beautiful Homemade Cakes and get yourself a copy. Shoot, the holidays are coming up and it’d also make a great gift. 😉 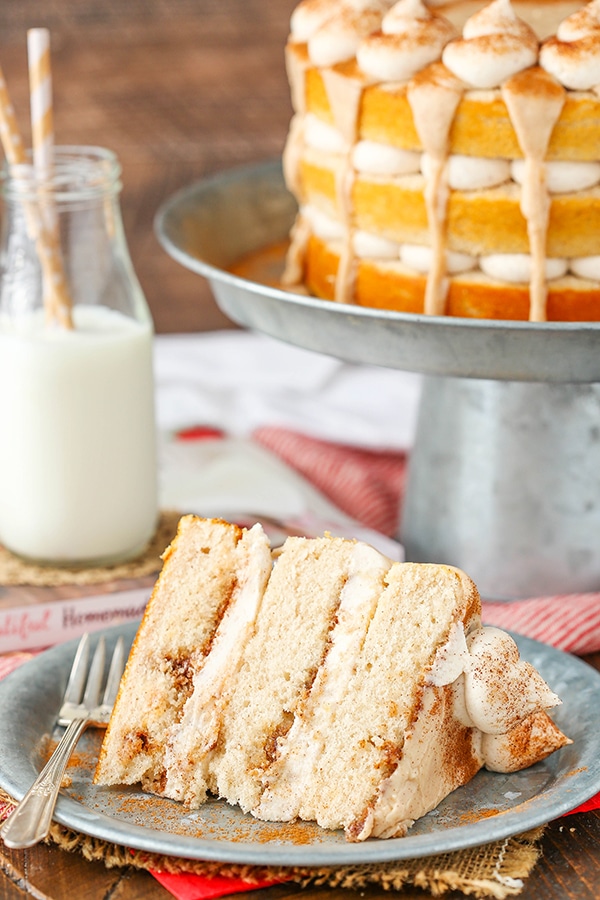 1. Prepare three 8 inch cake pans with parchment paper circles in the bottom and grease the sides. Preheat oven to 350°F (176°C) .
2. In a large mixing bowl, cream butter and sugar together until light in color and fluffy, about 3-4 minutes. Do not skimp on the creaming time.
3. Add sour cream and vanilla extract and mix until well combined.
4. Add egg whites in two batches, mixing until well combined after each. Scrape down the sides of the bowl as needed to be sure all ingredients are well incorporated.
5. Combine dry ingredients in a separate bowl, then combine the milk and water in a small measuring cup.
6. Add half of the dry ingredients to the batter and mix until well combined. Add the milk mixture and mix until well combined. Add remaining dry ingredients and mix until well combined. Scrape down the sides of the bowl as needed to be sure all ingredients are well incorporated.
7. Divide the batter evenly between the cakes pans and bake for about 21-23 minutes, or until a toothpick comes out with a few crumbs.
8. Remove the cakes from the oven and allow to cool for about 2-3 minutes, then remove to cooling racks to cool completely.
9. To make the frosting, beat the butter and shortening together until smooth.
10. Slowly add half of the powdered sugar and mix until smooth.
11. Add the vanilla extract, ground cinnamon and water or milk and mix until smooth.
12. Slowly add remaining powdered sugar and mix until smooth. Set aside.
13. To make the cinnamon sugar glaze, add the powdered sugar, brown sugar and cinnamon to a small bowl and whisk to combine. Add the water and whisk until smooth.
14. To put the cake together, use a large serrated knife to remove the domes from the top of the cakes so that they’re flat. Place the first cake on a serving plate or a cardboard cake round.
15. Spread 2 1/2 tablespoons of cinnamon sugar glaze over the cake layer. Allow it to soak into the cake. Pipe dollops of frosting onto the cake. Try to make sure the dollops are about the same size/height so the next cake doesn’t sit lopsided.
16. Repeat the process with the second layer of cake, glaze and frosting, then add the final layer of cake on top and the final layer of cinnamon glaze. Set cake aside.
17. To make the icing, combine all ingredients except for the powdered sugar in a small sauce pan. Heat on low until sugar is melted, then turn heat to medium to bring to a boil. Boil for 3 minutes, stirring occasionally, then remove from heat and immediately pour into a heat-proof glass bowl.
18. Whisk in powdered sugar and allow to cool slightly and thicken. If you find your icing to be a little thick, just add a touch more water to thin it back out.
19. Drizzle the icing down the sides of the cake while still a little warm. It will be too firm to pour and get a nice drizzle if it cools completely.
20. Use the remaining frosting to pipe dollops around the outside edge of the cake.
21. Fill in the top of the cake – between the dollops – with the remaining icing. Finish off the cake with a sprinkle of ground cinnamon, if desired.

Store the cake at room temperature in an airtight container.

The frosting recipe above reflects the amount I used in the cake as shown in the photos above. The version in the cookbook uses more frosting and lends a fully frosted cake.