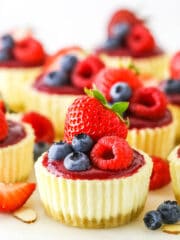 1. To make the mixed berry topping, add the berries to a food processor and puree until smooth then strain. You should end up with about 1 1/2 cups of puree.
2. Combine the berry puree and Monk Fruit In The Raw in a medium saucepan. Cook over medium-low heat, stirring consistently as the mixture thickens and cooks down. Cook until reduced by half, so that you end up with about 3/4 cup. To see if it’s done, pour the mixture into a measuring cup. If it’s reduced to 1 cup, it’s done. If not, add it back to the pan and keep cooking.
3. When done, pour the berry mixture into another bowl, then refrigerate and allow to cool completely.
4. To make the crusts, preheat oven to 350°F. Add cupcake liners to a cupcake pan and spray them with non-stick spray.
5. In a medium sized mixing bowl, combine the almond flour and the Monk Fruit In The Raw.
6. Add the melted butter and mix until well combined.
7. Divide the mixture evenly between the 12 cupcake liners. Use your fingers or the bottom of a cup or something similar to evenly press the mixture down.
8. Bake the crusts for 5 minutes, then set aside to cool.
9. To make the filling, reduce oven to 300°F (148°C). In a large bowl, mix the cream cheese and Monk Fruit In The Raw on low speed until well combined. Scrape down the sides of the bowl.
10. Add the sour cream and almond extract. Beat on low speed until well combined.
11. Add the eggs one at a time, beating slowly and scraping the sides of the bowl after each addition.
12. Divide the cheesecake batter evenly between the cups in the pan. The cups should be mostly full.
13. Bake the cheesecakes for 15 minutes, then turn off the oven and leave the door closed for another 8-10 minutes.
14. Crack the oven door and allow cheesecakes to cool for 15-20 minutes, then put in the fridge to finish cooling. The cheesecakes will puff up a little while baking, then fall as they cool. If they look a little wrinkled on top, that’s ok.
15. When cheesecakes are cool and firm, remove them from the pan.
16. Top each mini cheesecake with about one tablespoon of the berry mixture, then top it with some fresh fruit.
17. Cheesecakes are best when stored well covered in the fridge for 3-4 days.