This Cannoli Cheesecake recipe is made with a mix of ricotta and mascarpone cheese for a cheesecake that tastes like the classic Italian dessert. It has a touch of cinnamon and mini chocolate chips for a truly delicious treat!

If you’re in the mood for more tasty Italian desserts, try this Italian Cream Cake or this Classic Tiramisu Recipe. They’ll definitely hit the spot! 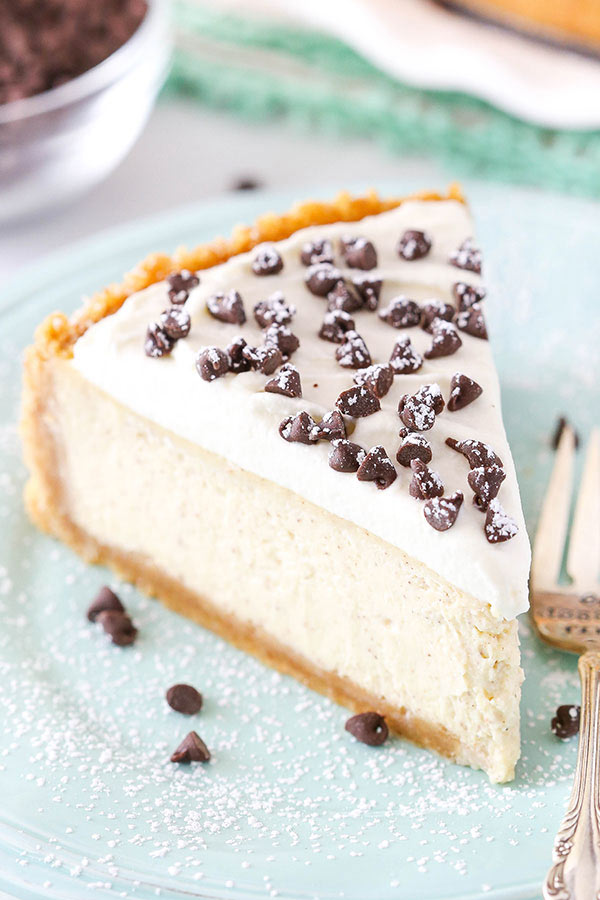 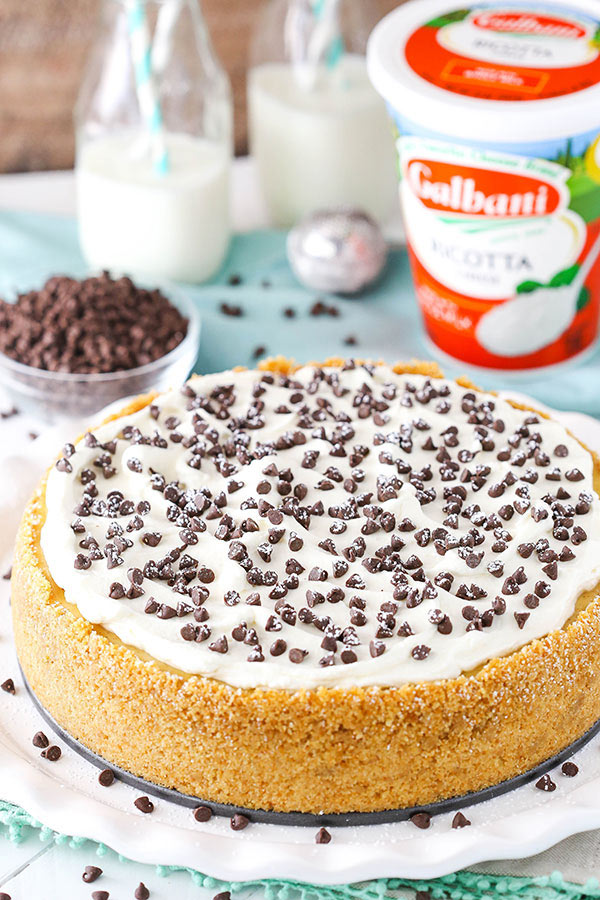 This post is sponsored by Galbani Italian Cheese, but all opinions are my own.

Sometimes I think I should’ve been born Italian, but sadly I don’t have an Italian background at all. My maiden name is actually French and so were my great-grandparents. However, if there’s a couple desserts I love, it’s cannoli and tiramisu. With cannoli, there’s just something about the combination of ricotta and mascarpone cheeses that has the best flavor and such a fun texture. Then with some vanilla, cinnamon and a few mini chocolate chips, it’s heaven! Such a subtly amazing flavor. 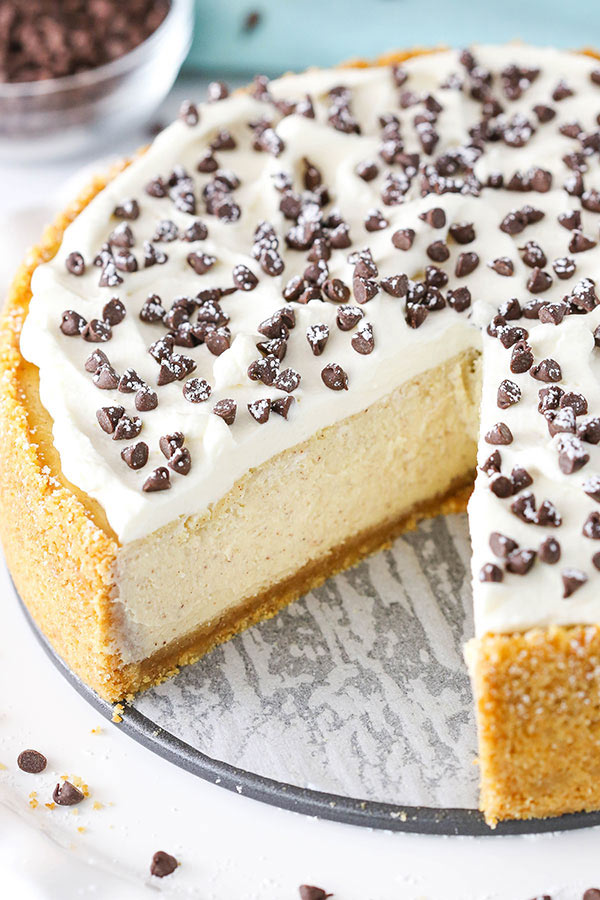 How to Make Cannoli Cheesecake

While the crust bakes, it’s time for the filling. To start, you’ve got Galbani Ricotta Cheese and mascarpone cheese. Both are softer cheeses, so it doesn’t take much mixing to combine them. In fact, be sure not to over mix them – mascarpone cheese can get a little thin if over mixed. And I’d definitely recommend the Galbani Ricotta – it is SO good! It’s now made in the U.S. but was originally made in Italy more than 130 years ago. Plus, the quality of the cheese is wonderful. Unlike some ricotta, where you really need to be sure to drain it first, the Galbani Ricotta is wonderfully creamy and smooth. I’d normally say to drain the ricotta before using it (and you certainly can), but I didn’t even think it necessary with this one. Love it!

To the cheeses, you’ll add some vanilla extract and ground cinnamon. It adds just the right amount of flavor and spice. The eggs are next and are added one at a time at low speed, to keep from adding too much air to the batter. Air in the batter can cause bubbles that rise to the top while baking and cause cracks. Nobody wants that. 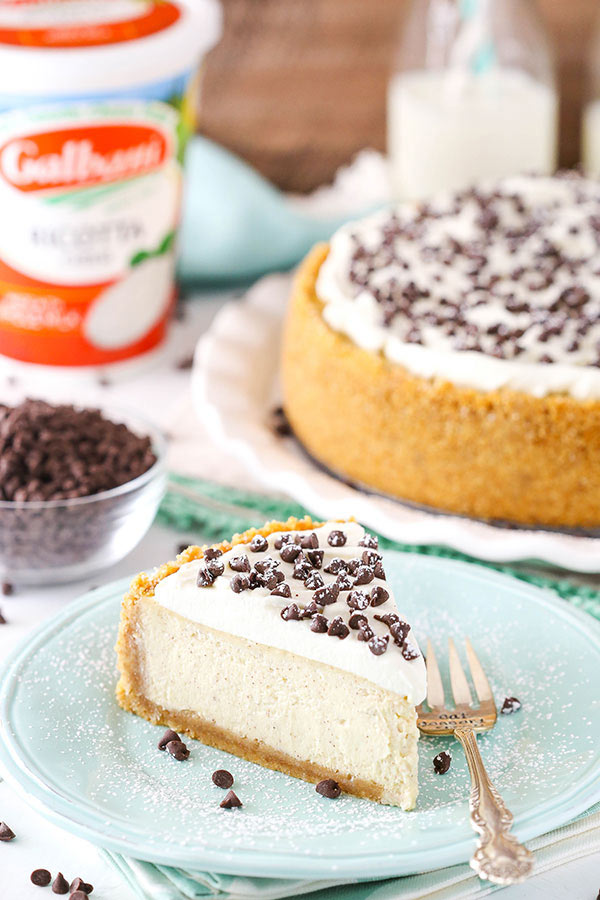 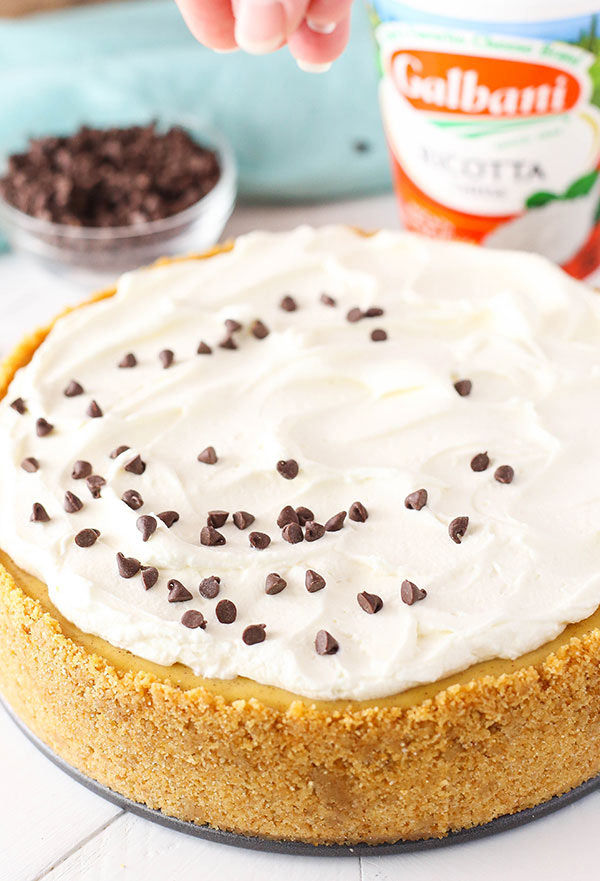 Can You Make Cheesecake Ahead Of Time?

The cheesecake is baked, then is slowly cooled and refrigerated until firm. I usually make the cheesecake the night before so that it has time to firm overnight, then I’ll finish it the next day and serve.

To finish off the cheesecake, I’ve topped it with a ricotta whipped cream. It’s super easy to make – you just toss everything into the mixer and whip on high speed until stiff peaks firm. Spread it on top of the cheesecake, then add some mini chocolate chips. I sprinkled on some powdered sugar because I love the look, but that’s totally optional.

This cheesecake is to die for! Such a perfect cannoli flavor and texture! It’s a little softer than your average cheesecake made with cream cheese just because of the difference in the cheeses, but it’s perfect for a cannoli cheesecake. Now I’ll add it to my list of favorite cannoli desserts. 🙂 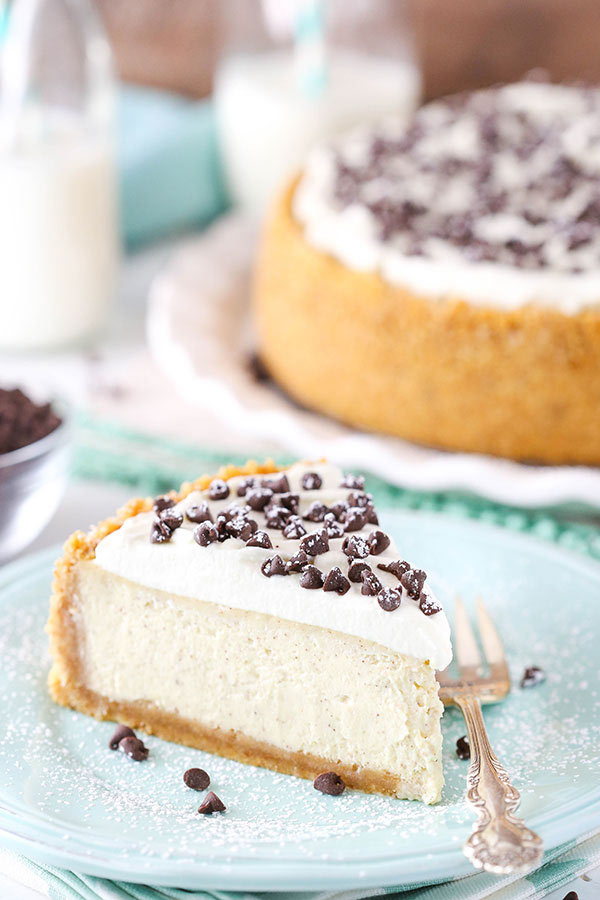 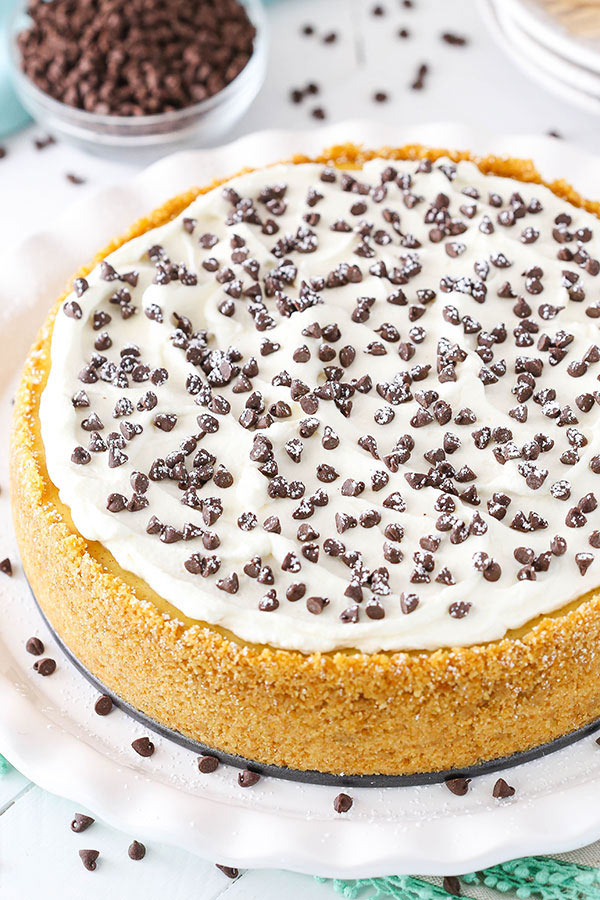 This Cannoli Cheesecake is made with a mix of ricotta and mascarpone cheese for a cheesecake that tastes like the classic Italian dessert. It has a touch of cinnamon and mini chocolate chips for a truly delicious treat!

1. Preheat oven to 325°F (163°C). Line a 9-inch springform pan with parchment paper in the bottom and grease the sides.
2. Mix together the crust ingredients until well combined and press the mixture into the bottom and up the sides of the springform pan.
3. Bake the crust for 10 minutes, then set aside to cool.
4. Cover the outsides of the pan with aluminum foil to prepare it for a water bath. Here is a tutorial on how I set up a pan for a waterbath. Set prepared pan aside.

1. Reduce oven temperature to 300°F (148°C).
2. In a large bowl, mix the ricotta cheese, mascarpone cheese, sugar and flour on low speed until combined and smooth. Be sure to use low speed to reduce the amount of air added to the batter, which can cause cracks, and to make sure you don’t over mix. Scrape down the sides of the bowl.
3. Add the cinnamon and vanilla extract and mix on low speed until well combined.
4. Add the eggs one at a time, mixing slowly to combine. Scrape down the sides of the bowl as needed to make sure everything is well combined.
5. Pour the cheesecake batter into the crust and spread evenly.
6. Place the springform pan inside another larger pan. Fill the outside pan with enough warm water to go about halfway up the sides of the springform pan. The water should not go above the top edge of the aluminum foil on the springform pan.
7. Bake the cheesecake for 1 hour and 45 minutes, or until the edges are set and the center is still jiggly when moved (but not liquidy).
8. Turn off the oven and leave the cheesecake in oven with the door closed for 30 minutes. Do not open the door.
9. Crack oven door and leave the cheesecake in the oven for another 30 minutes. This cooling process helps the cheesecake cool slowly to prevent cracks.
10. Remove the cheesecake from the oven, then remove the pan from the water bath and remove the aluminum foil. Refrigerate the cheesecake until completely cooled and firm, 6-7 hours or overnight.
11. When the cheesecake is cooled and firm, remove it from the springform pan.
12. To make the whipped cream, add the heavy whipping cream, powdered sugar, ricotta cheese and vanilla extract to a large mixer bowl. Whip on high speed until stiff peaks form.
13. Spread the whipped cream on top of the cheesecake, then sprinkle with mini chocolate chips and a little additional powdered sugar, if desired.
14. Refrigerate until ready to serve. Cheesecake is best for 3-4 days. 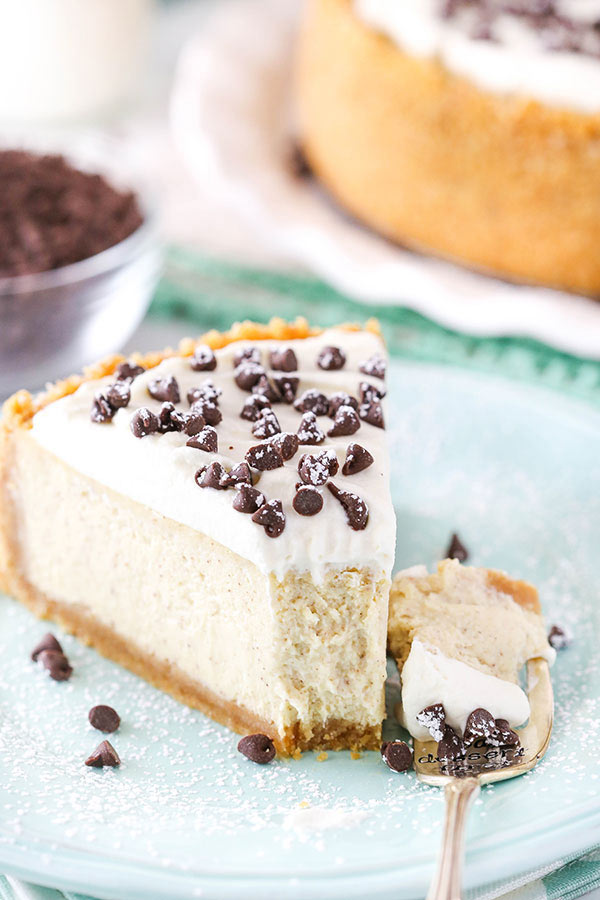