For a classic carrot cake recipe, try my Super Moist Carrot Cake with Cream Cheese Icing or this recipe for the Best Carrot Cake! 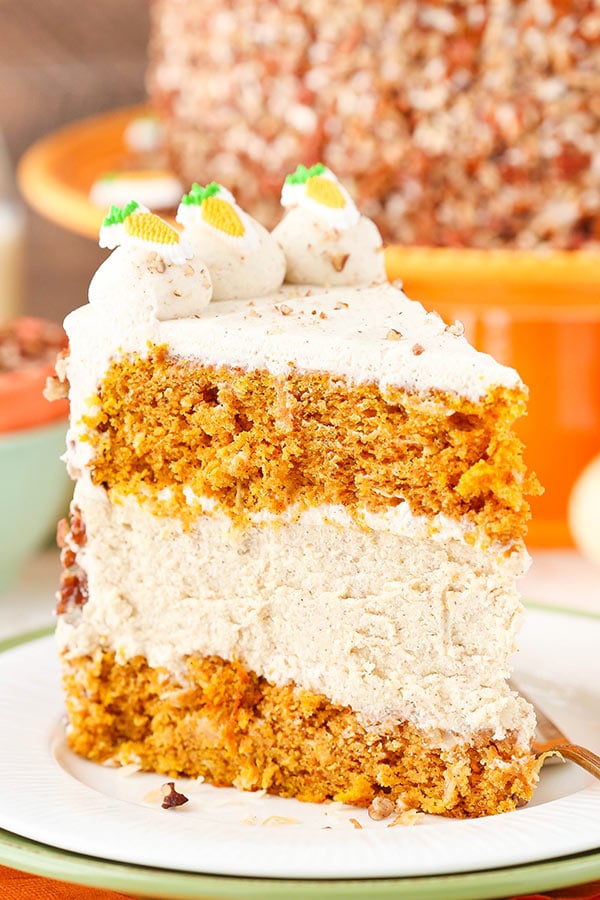 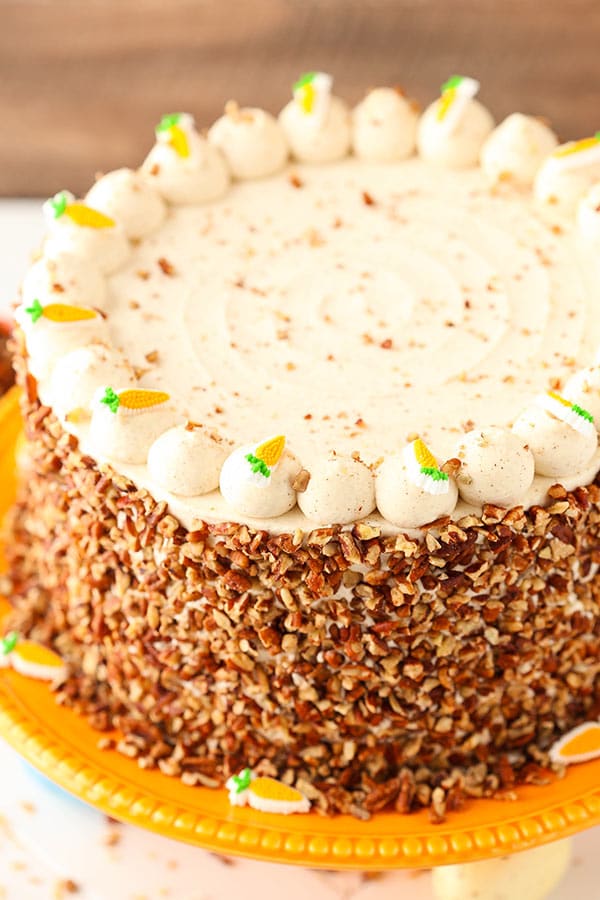 So speaking of Easter (and you know, Easter eggs), I had a pretty funny conversation with my cousin and her husband over this last weekend. I was visiting them in Chicago and since I’m gearing up to hopefully get started with IVF next week, I’ve been eating a little differently than normal in order to help my eggs develop as well as they can. I’ve been eating much healthier – as in mostly meat, veggies and fruit. Very little (if any) bread, pasta, potatoes, sweets (AH!!), etc.

So my cousin and I were explaining this to her husband so he’d understand what was on and off limits. He focused on the veggie part of the diet and then compared it to maybe the funniest thing I’ve ever heard – the slogan on their egg carton. “Girls on grass, free to forage!” I’m not sure I’ve ever laughed so hard while comparing myself to grass-eating and foraging chickens.

So the joke for most of the weekend was how I was foraging. 🙂 Clearly I should go hang out with some free-range chickens. 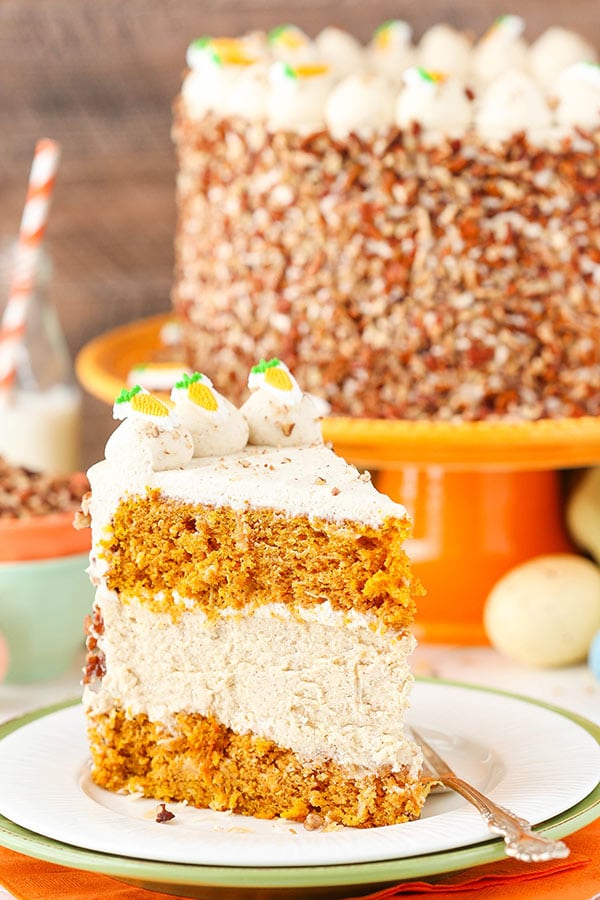 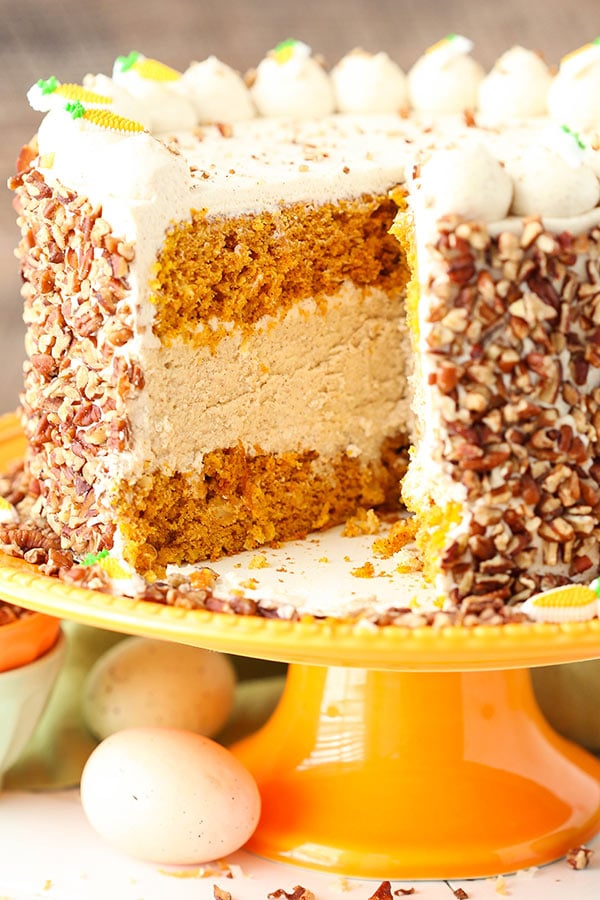 This Recipe Combines Two Of My Favorite Easter Desserts

Definitely the hardest part of my current eating situation is not devouring all of the desserts. Of course I still have to taste things – I couldn’t possibly tell you how good they are without tasting – but then I have to give it away. *hangs head in sadness* It really is torture. I can tell you after my tasting of this cake that this one was especially torturous.

This cake is a mix of two of my favorite kinds of Easter desserts – cake and cheesecake. Putting them both into one cake is pure genius. I had a request for this cake late last year and I’ve been dying for Easter to get close so I could share it!

This cake starts with the cheesecake. It takes the longest to cool and set, so I often make the cheesecake the night before I put the cake together. You could also make the cakes the night before, if you wanted. I like to make sure that I use the same cake pan for both the cake layers and the cheesecake so that they all end up being the same size. My springform pan turns out a slightly larger cake. To make it easy to remove the cheesecake from the cake pan, I line it with aluminum foil and press it firmly into the bottom and up the sides of the pan. The final cheesecake is nice and firm so that it’s easy to move around and layer onto the cake. The creamy cinnamon-flavored cheesecake goes perfectly with the spiced carrot cake.

You might be a little surprised by part of the method with the carrot cake. Rather than using shredded carrots, like most carrot cakes do, this cake uses steamed carrots that are pureed. I tried a carrot cake with this method years ago and now I never make carrot cakes any other way. You really get the carrot flavor and it makes such a moist cake. You could compare it to making a pumpkin cake with pumpkin puree. Imagine the difference between shredded pumpkin and pumpkin puree in a pumpkin cake. The puree adds so much more flavor! LOVE!

I also like to include some coconut and pineapple in my carrot cake. I love the flavor of both and think the pineapple adds additional moisture. If you aren’t a fan of one of them in your carrot cake, feel free to leave it out.

The whole cake is frosted with cream cheese whipped cream frosting, which is perfect with the carrot cake! Plus, the cake itself is relatively heavy with all the cake and cheesecake, so the lighter frosting is nice. On the outside, I’ve added the pecans as decoration.

This whole cake is SO darn good! The carrot, the coconut, the pineapple, the spices! And the cinnamon cheesecake! What is there not to love?! 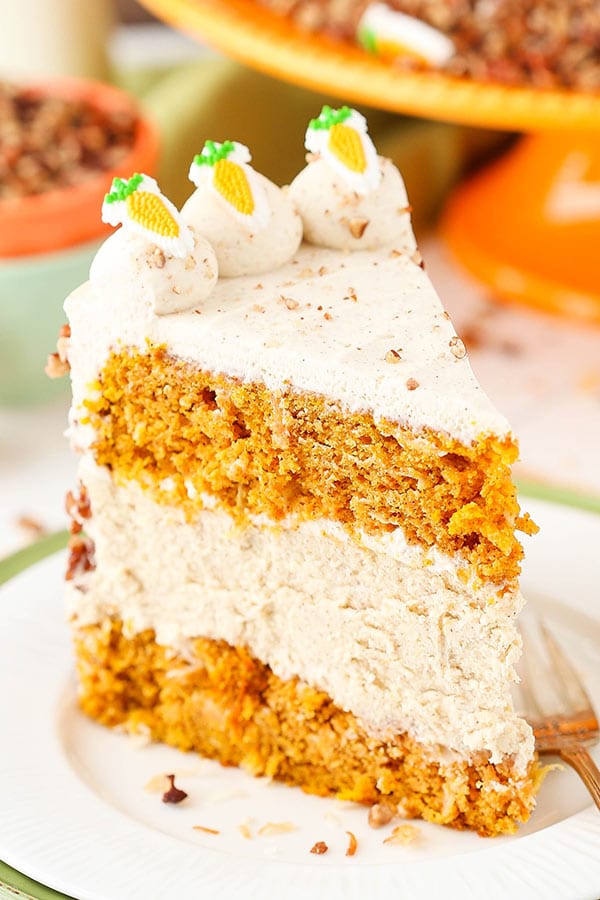 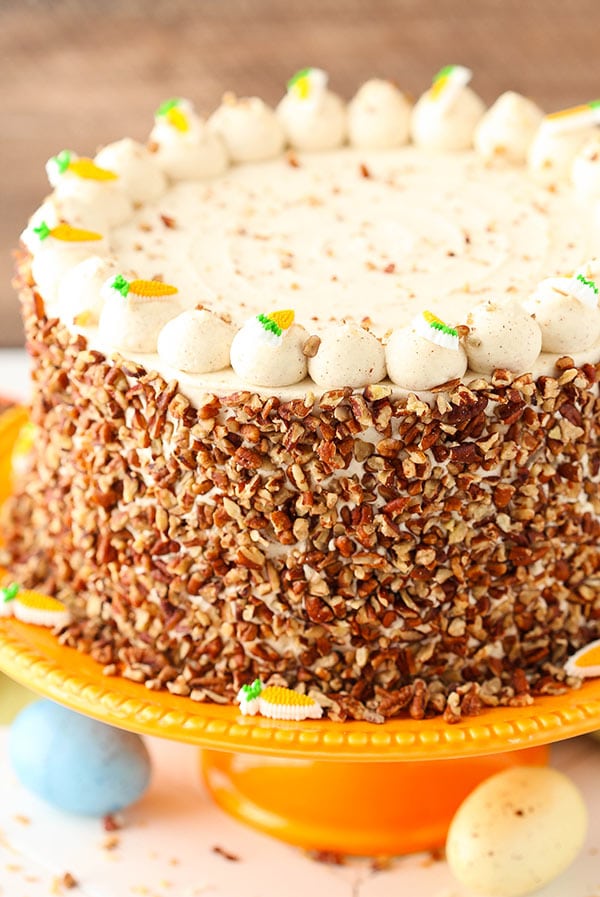 1. Preheat oven to 300°F (148°C). Line the entire inside of a 9 inch cake pan with aluminum foil. Press it into the pan to get it as flat as you can. You’ll use the aluminum foil to lift the cheesecake out of the pan when it’s baked and cooled.
2. In a large mixer bowl, mix the cream cheese, sugar and flour together until combined. Use low speed to keep less air from getting into the batter, which can cause cracks. Scrape down the sides of the bowl.
3. Add the sour cream, vanilla extract and and cinnamon and mix on low speed until well combined.
4. Add the eggs one at a time, mixing slowly and scraping the sides of the bowl after each addition.
5. Pour the cheesecake batter into the lined cake pan.
6. Place the cake pan inside another larger pan. I use a larger cake pan, but you can use a roasting pan or any other larger baking pan. Fill the outside pan with enough warm water to go about halfway up the sides of the cake pan. Bake for 1 hour.
7. Turn off the oven and leave the cheesecake in the oven with the door closed for 30 minutes. Do not open the door or you’ll release the heat.
8. Crack oven door and leave the cheesecake in the oven for another 30 minutes. This cooling process helps the cheesecake cool slowly to prevent cracks.
9. Remove cheesecake from oven and chill until firm, 5-6 hours.

TO MAKE THE CARROT CAKE LAYERS:

10. To steam the carrots, bring about an inch of water to a boil in the bottom of a pot. Put peeled carrots in a steamer basket (or a colander, if you don’t have a steamer basket) set over the boiling water. Cover and steam the carrots until very tender, about 10-15 minutes.
11. Put the warm carrots into a food processor and puree. You should end up with about 1 ¾ cup (420ml) of carrot puree. Set aside to cool.
12. Preheat the oven to 350°F (176°C). Line the bottom of two 9 inch cake pans with parchment paper and grease the sides.
13. In a large mixer bowl, cream the butter and sugar on medium speed until light in color and fluffy, 3-4 minutes. Don’t skimp on the creaming time.
14. Add the vanilla extract and vegetable oil and mix until combined.
15. Add the eggs one at a time, mixing until incorporated after each addition.
16. Add the egg white and mix until well combined. Scrape down the sides of the bowl as needed to make sure everything is combined.
17. Combine the dry ingredients in a medium sized bowl.
18. Add half of the flour mixture to the batter and mix until combined.
19. Add the carrot puree to the batter and mix until combined.
20. Add the remaining flour mixture and mix until well combined and smooth.
21. Stir in the crushed pineapple and coconut flakes. Scrape down the sides of the bowl as needed to ensure everything is well combined.
22. Divide the batter evenly between the prepared cake pans. Bake for 30-35 minutes, or until a toothpick inserted in the middle comes out with a few crumbs.
23. Remove cakes from the oven and allow to cool for 3-4 minutes, then remove from the pans to a cooling rack to finish cooling.

TO MAKE THE FROSTING AND ASSEMBLE THE CAKE:

24. Add the cream cheese to a large mixer bowl and beat until smooth, then set aside.
25. Add the heavy whipping cream, powdered sugar, vanilla extract and cinnamon to another bowl and whip until soft peaks form.
26. Add the cream cheese to the whipped cream and whip until stiff peaks form. It will happen fairly quickly. Set whipped frosting in the refrigerator.
27. Use a large serrated knife to remove the domes from the top of the two carrot cakes.
28. Place the first layer of cake on a serving plate or a cardboard cake round. Spread about 1 cup of frosting evenly on top of the cake layer.
29. Use the aluminum foil to lift the cheesecake out of the cake pan, remove the foil and place the cheesecake on top of the cake.
30. Spread another cup of frosting evenly on top of the cheesecake, then add the second layer of cake on top. If the sides of the cake don’t line up, use a serrated knife to trim off the excess cake or cheesecake.
31. Frost the outside of the cake.
32. To create a spiral pattern on the top of the cake, lightly press an offset spatula into the center of the cake. Gradually move the tip of the spatula outward as you spin the cake around, creating the spiral.
33. Press the pecans into the sides of the cake
34. Pipe dollops of the whipped frosting around the top edge of the cake. I used the Ateco 808 icing tip.
35. Finish off the cake with some candy carrots or other carrot decor.
Store the cake (in an airtight container, if possible) in the refrigerator until ready to serve. Cake is best for 2-3 days. 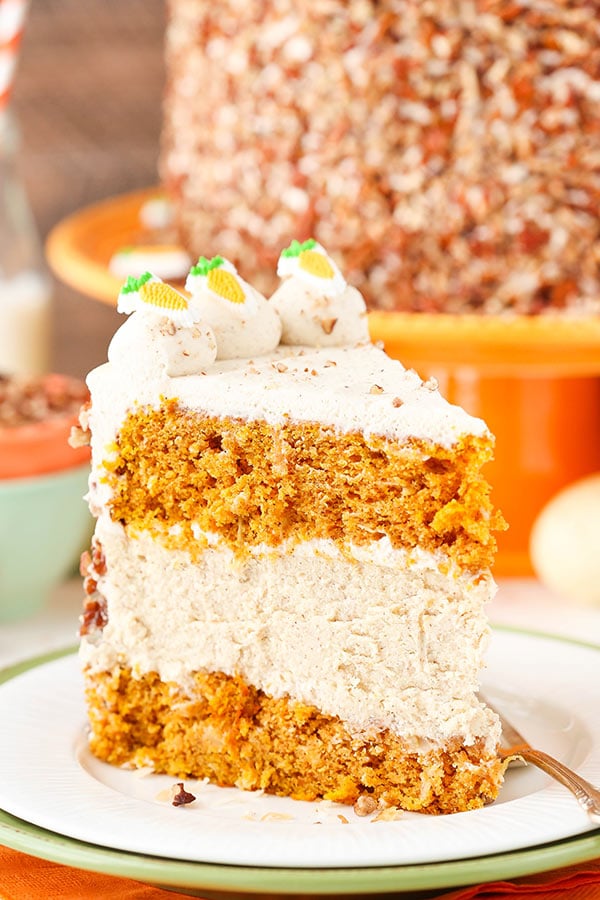