This Red Velvet Cheesecake Cake recipe has layers of moist red velvet cake and creamy cheesecake, covered in cream cheese frosting! If you’ve ever had the cheesecake by the same name at The Cheesecake Factory and loved it, this is the perfect recipe to make at home!

So by now you guys know that I love a good cheesecake. I have SO many on my site, it’s nutty. I’ve got other copycats from the Cheesecake Factory (or at least ones inspired by their cheesecakes), including the Banana Cream Cheesecake (my all-time fave), Oreo Dream Extreme Cheesecake, Kahlua Coffee Brownie Cheesecake and the Outrageous Chocolate Coconut Cheesecake Cake. Add to that list the other cheesecake cakes I’ve got for you – like this Strawberry Cheesecake Cake and Carrot Cake Cheesecake Cake – and there’s a lot to get excited about!

That said, this Red Velvet Cheesecake Cake quickly became a classic for us. So moist, so delicious and perfect for a special occasion or holiday like Valentine’s Day or Christmas. I’ve become a lover of red velvet cake since I started making it myself from scratch, so I personally LOVE the flavor of this cake. And it combines two amazing things – cake and cheesecake. Score!

WHAT IS A RED VELVET CHEESECAKE CAKE?

If the name doesn’t give it away, it’s a cake that’s layered with both cheesecake and cake. In this case, the cake layers are red velvet and the cheesecake is classic vanilla.

As someone who genuinely enjoys red velvet, I do not think that red velvet cake is just chocolate cake. I feel like I see everywhere that it is, but let’s talk about how it isn’t, ok?

First, red velvet cake has always been made with vinegar and buttermilk and the acidity reacts with the cocoa to reveal the red anthocyanin in the cocoa, which would give it it’s red-ish color. These days, food coloring is added to really give it the red color we’re familiar with. These ingredients not only contribute to the color, but also the flavor. Red velvet cake has a lovely tang to it that simply isn’t present in chocolate cake. 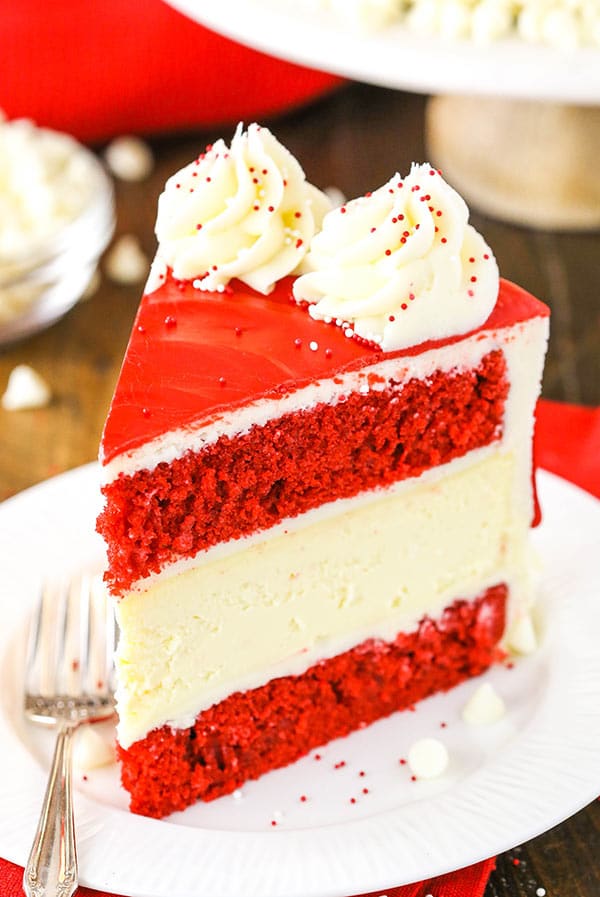 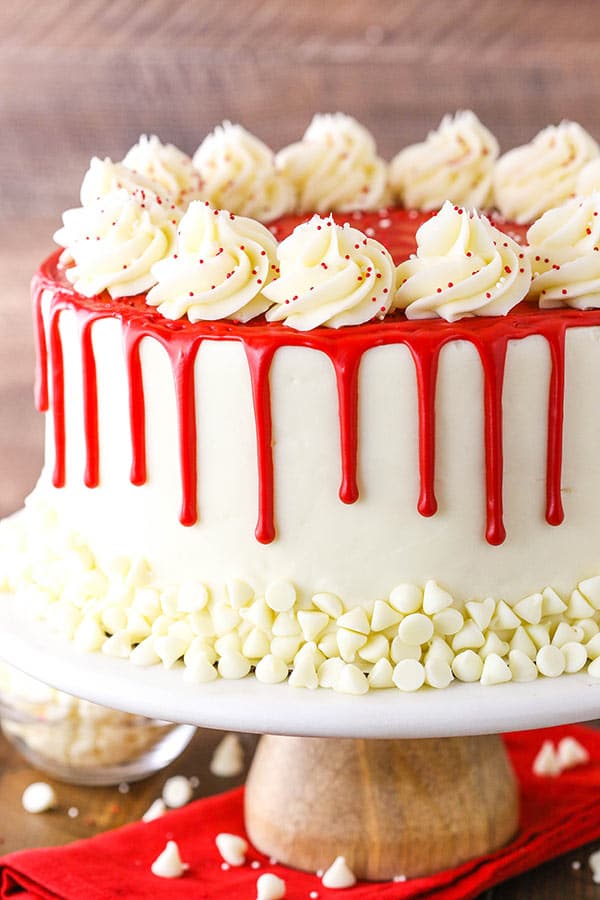 WHAT IS THE FLAVOR OF RED VELVET CAKE?

So there we have it. Red velvet cake and chocolate cake are not the same. Yes, there’s a little cocoa, but the flavor is harder to describe than that. It’s tangy, delicious and uniquely “red velvet”. You just have to try it to know and love it. 🙂

HOW DO YOU MAKE A RED VELVET CHEESECAKE CAKE?

Now that we’ve covered the basics, let’s talk about how to make this delicious cake. Start by making the cheesecake. I use my classic, creamy vanilla cheesecake. One of the great things about this cake is that various parts can be made ahead and the cheesecake layer is definitely one of those things. Cheesecakes hold up well for several days, so making it a day or so ahead would be fine.

As always, I bake it in a water bath. I know it’s a step that many go to great lengths to avoid, but it really does make a creamier cheesecake that doesn’t fall in the middle, brown on the edges or crack.

HOW DO YOU MAKE SURE THE CHEESECAKE LAYER IS THE SAME AS THE RED VELVET CAKES?

So, even if you’re making a 9 inch cake (which this one is), and you tend to use a 9 inch springform pan for cheesecakes and then 9 inch cake pans for cakes, you’ll want to use the same cake pan for the cheesecake and cake layers this time. Not all 9 inch pans are actually the same size, so line your cake pan with aluminum foil and press it tightly against the sides. Then bake the cheesecake in that pan, let it cool and use the foil to lift it out of the cake pan. You can then put that cheesecake back in the fridge and use the cake pan for the cake layers. 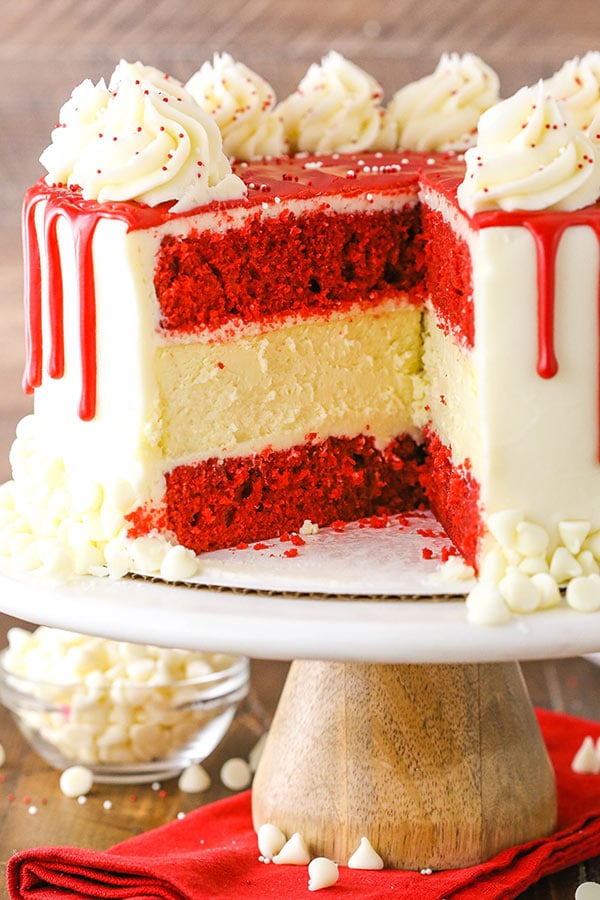 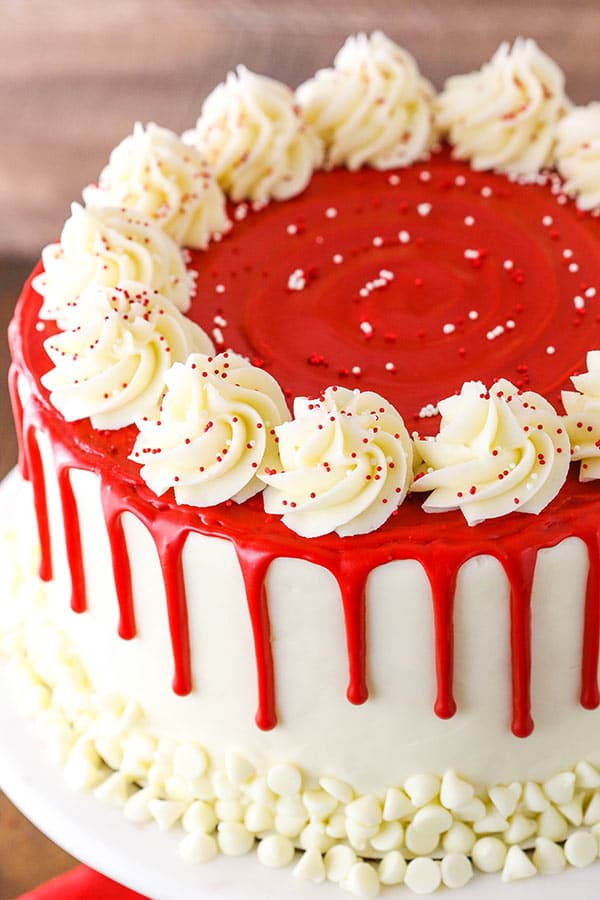 Once the cheesecake is made, it’s time for the cake layers. I used my favorite Red Velvet Cake recipe and it really is SO good!

Bake up those layers and let them cool. When you’re ready to build the cake, make the Cream Cheese Frosting. It’s such a classic frosting to pair with red velvet and this one pipes and frosts beautifully.

HOW TO BUILD A RED VELVET CHEESECAKE CAKE

Frost the outside of the cake as usual, then decorate it to your liking. I decided to use a fun red drip, some sprinkles and some white chocolate chips, but you could also cover the sides entirely in white chocolate chips to keep it simple, but elegant. Totally your call.

However you decorate it though, you really must try it! The cake is wonderfully moist, the cheesecake thick and creamy, the frosting wonderfully tangy. Together they make the perfect Red Velvet Cheesecake Cake. So good you won’t want to share. 🙂 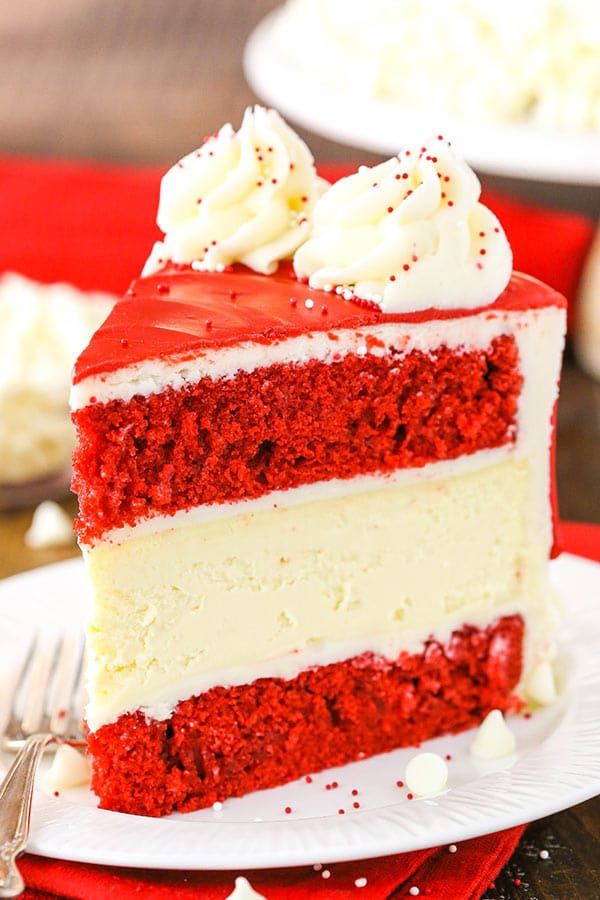 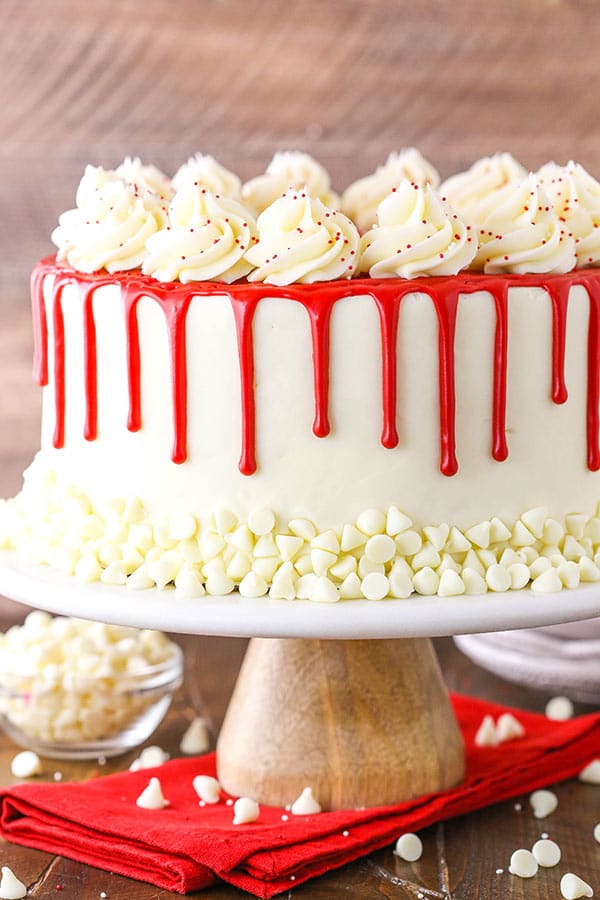 This Red Velvet Cheesecake Cake is made with layers of moist red velvet cake and thick and creamy cheesecake! If you’ve ever had the cheesecake by the same name at The Cheesecake Factory and loved it, this is the perfect recipe to make at home!

To make the cheesecake:

1. Preheat oven to 300°F (148°C). Line the entire inside of a 9-inch (23cm) cake pan with aluminum foil. Press it into the pan to get it as flat as you can. You’ll use the aluminum foil to lift the cheesecake out of the pan when it’s baked and cooled.
2. In a large mixer bowl, mix the cream cheese, sugar and flour together until combined. Use low speed to keep less air from getting into the batter, which can cause cracks. Scrape down the sides of the bowl.
3. Add the sour cream, and vanilla extract and mix on low speed until well combined.
4. Add the eggs one at a time, mixing slowly and scraping the sides of the bowl after each addition.
5. Pour the cheesecake batter into the lined cake pan.
6. Place the cake pan inside another larger pan. I use a larger cake pan, but you can use a roasting pan or any other larger baking pan. Fill the outside pan with enough warm water to go about halfway up the sides of the cake pan. Bake for 1 hour.
7. Turn off the oven and leave the cheesecake in the oven with the door closed for 30 minutes. Do not open the door or you’ll release the heat.
8. Crack oven door and leave the cheesecake in the oven for another 30 minutes. This cooling process helps the cheesecake cool slowly to prevent cracks.
9. Remove cheesecake from oven and chill until firm, 5-6 hours.

To make the cake layers:

10. Preheat the oven to 350°F (176°C). Line the bottoms of two 9-inch (23cm) cake pans with parchment paper and grease the sides.
11. Add the flour, sugar, baking soda, baking powder, cocoa and salt to a large mixer bowl and combine. Set aside.
12. Add the buttermilk, vegetable oil, vanilla extract, eggs, vinegar and red food coloring to a medium sized bowl and combine.
13. Add the wet ingredients to the dry ingredients and beat until well combined.
14. Slowly add the hot water to the batter and mix on low speed until well combined. Scrape down the sides of the bowl as needed to make sure everything is well combined.
15. Divide the batter evenly between the two pans and bake for 23-26 minutes, or until a toothpick comes out with a few moist crumbs.
16. Remove the cakes from the oven and allow to cool for 3-5 minutes, then remove to a cooling rack to finish cooling.

To make the frosting:

To build the cake:

To decorate the cake:

26. Press white chocolate chips into the bottom of the cake, around the bottom edge. Refrigerate cake for about 20 minutes.
27. To make the red ganache, place the red candy melts in a small bowl
28. Heat the heavy whipping cream just until it begins to boil, then pour over the candy melts. Allow it to sit for about a minute, the whisk to melt. If it isn’t completely melted (and it probably won’t be), heat it for another 20-30 seconds, the whisk until smooth.
29. Allow the ganache to cool until it thickens up a good bit, but is still pourable, then transfer to a squeeze bottle.
30. Drizzle the ganache around the edge of the cake.
31. Heat the remaining ganache (you can leave it in the bottle) for about 10 seconds to soften it up again, then pour it onto the top of the cake and quickly spread to the edges.
32. Allow the ganache to cool and firm, then pipe swirls of the frosting around the top edge of the cake. I used the Ateco 844 icing tip. Add sprinkles, if desired.
33. Store the cake (in an airtight container, if possible) in the refrigerator until ready to serve. Cake is best for 2-3 days. 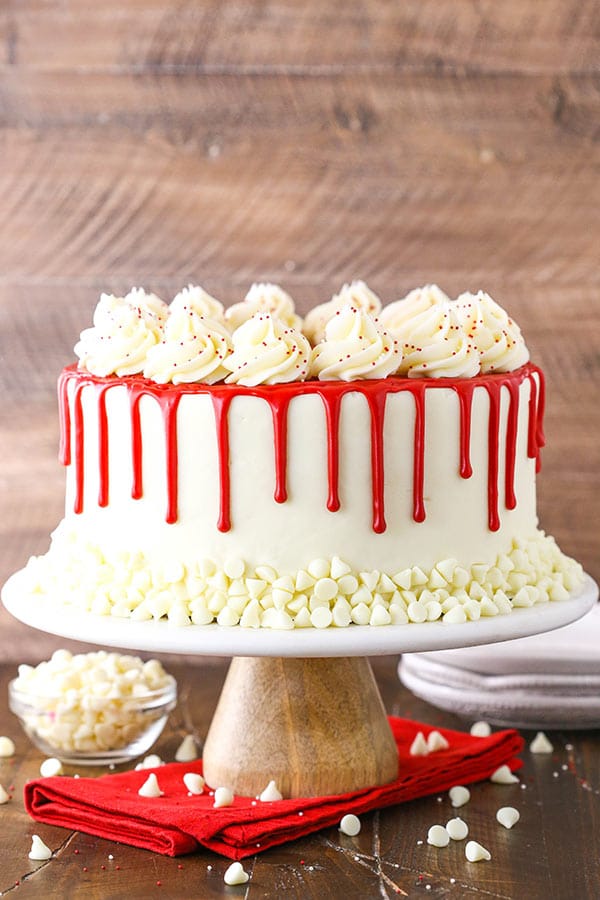 Previous Post
Chocolate Cake Recipes for Any Occasion
Next Post
How to Make a Perfect Cheesecake: 10 Tips and Tricks 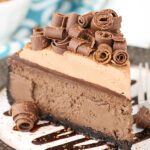 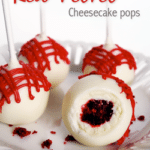 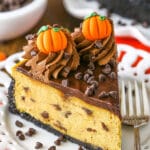 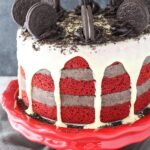 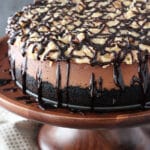