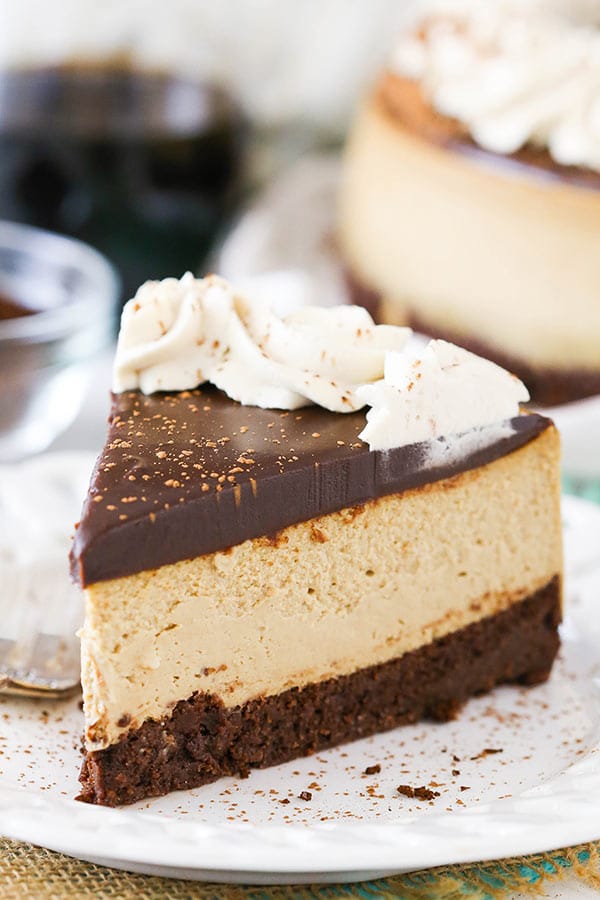 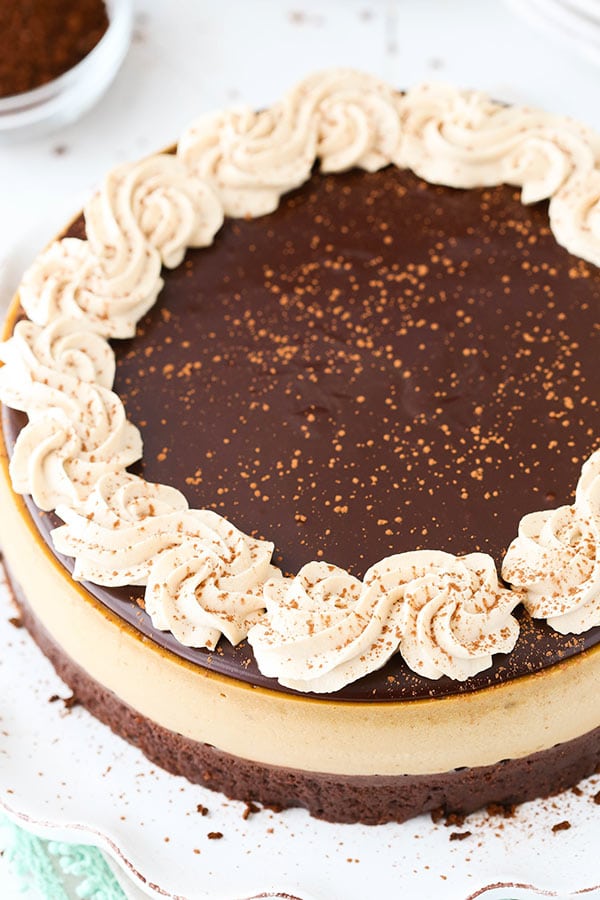 This cheesecake has been a long time coming. I have been wanting to make it forever. You could say it’s a copycat of the Kahlua Cocoa Coffee Cheesecake from the Cheesecake Factory. That was certainly the inspiration. But given my issues finding a springform pan that doesn’t leak, I was delayed in finding a springform pan I could bake a brownie in. I finally found one at Target a few weeks ago and this was the first thing I made.

There were many versions of this cheesecake before I had it just the way I wanted it. First, the brownie. To bake first, or not to bake first? I tried it both ways. The bottom line is the brownie ends up super fudgy either way, but pre-baking is preferred. The brownie is better for slicing and serving if pre-baked. It really is fudgy, so the extra baking time is good.

How to Make The Best Cheesecake

While the brownie bakes, put together the cheesecake filling. It’s a fairly straightforward filling. For the coffee and Kahlua flavoring, I used some instant coffee granules and Kahlua to get a good strong coffee flavor without having to add a ton of liquid. Works like a charm! I played around with more or less of both the coffee and the Kahlua and I love the final version. Just enough of both! 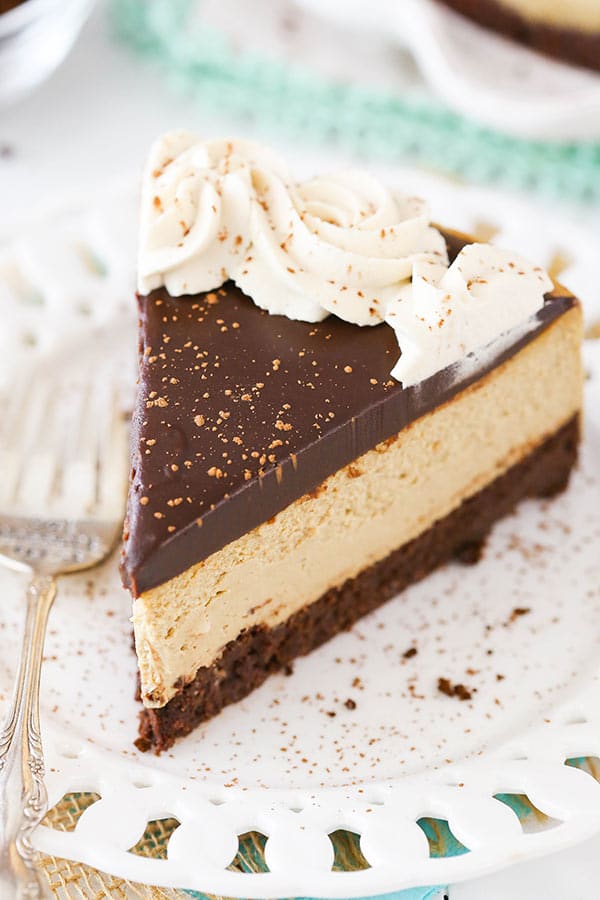 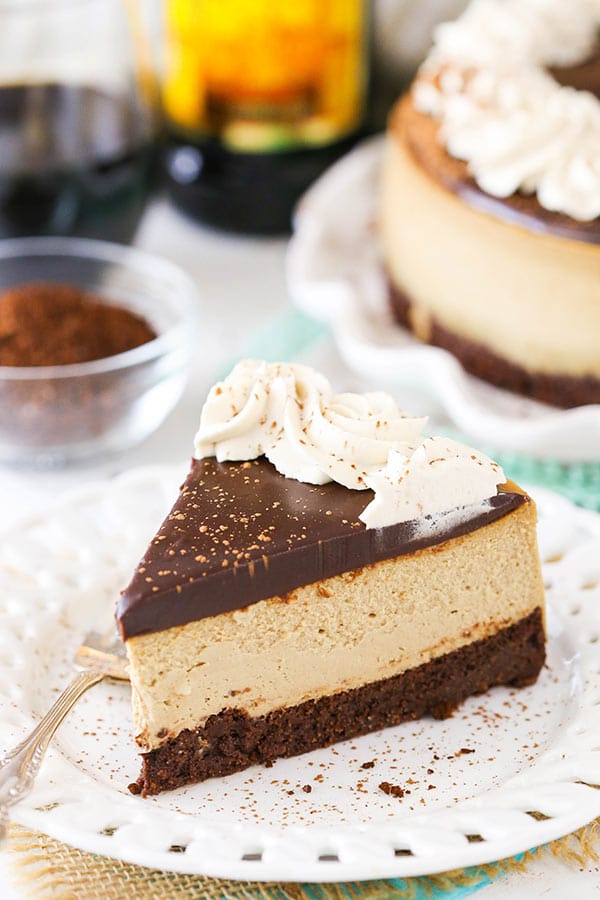 When the brownie is done baking, add the cheesecake filling on top and prepare the pan for a water bath. The pan will be warm from the oven, so do be careful. I am often asked if the water bath is necessary and in my opinion the answer is yes. Will the cheesecake bake without it? Sure. But you’ll want to bake it for less time and expect it to be a little drier, to crack and to sink in the middle when it cools. If you want it to look like mine, the water bath is necessary. 🙂

After the cheesecake is baked and cooled, it’s time for the topping! First up is the chocolate ganache. I added some Kahlua to it to add to the Kahlua flavor and it’s wonderful. Spread it on top and let it cool for a few minutes while you make the whipped cream.

The whipped cream also has Kahlua in it because more Kahlua is more better. 🙂 The powdered sugar in the whipped cream is the stabilizer so that it holds up well, so don’t be tempted to reduce the amount. Pipe the whipped cream on top, sprinkle on a little cocoa powder if you’d like and you’re ready to dig in!

I was so in love with this cheesecake! Smooth, creamy and just the right flavor! So totally dangerous to have in the house, but so worth it too! 🙂 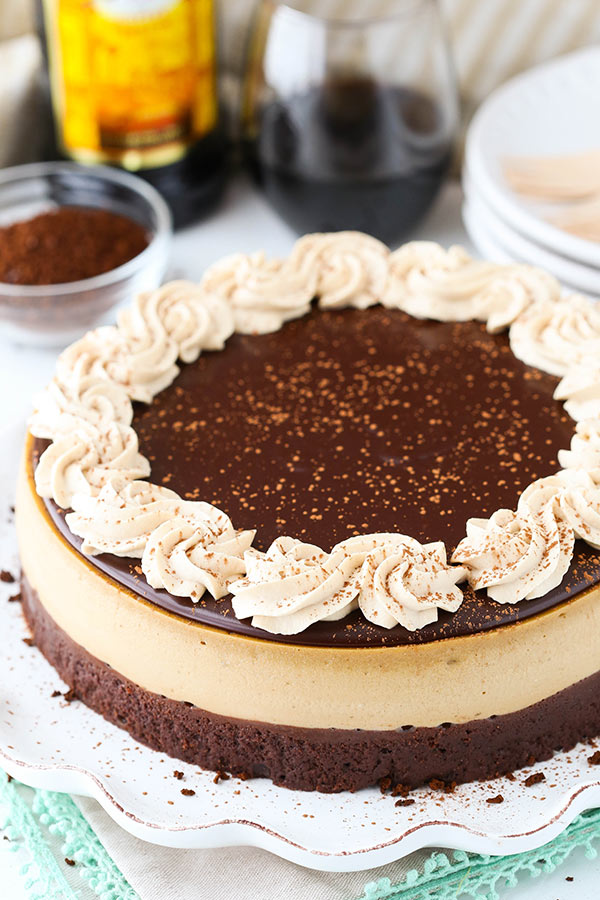 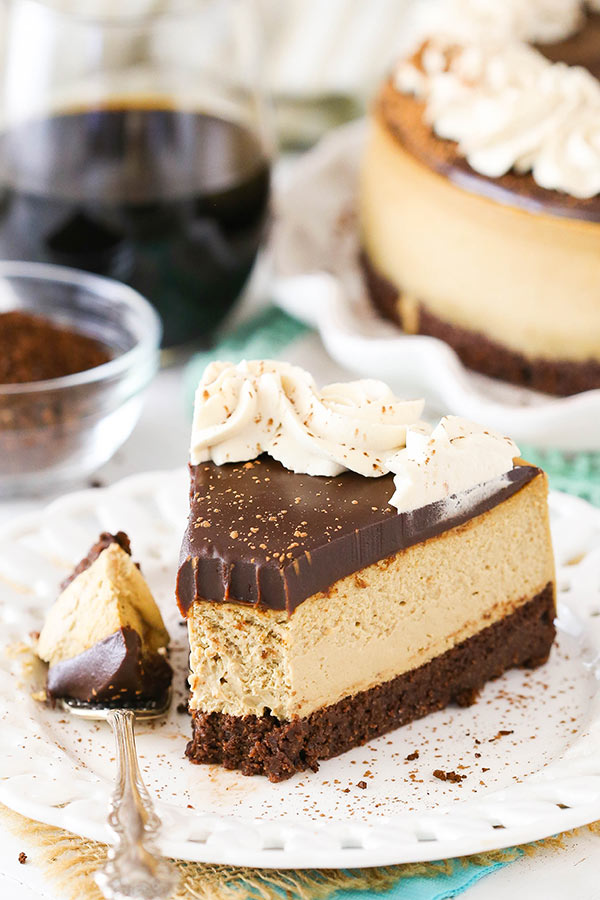 1. Preheat oven to 350°F (176°C). Line a 9-inch (23cm) springform pan with parchment paper in the bottom and grease the sides.
2. Combine the butter, sugar and vanilla extract in a medium sized bowl.
3. Add the eggs and mix until well combined.
4. In another medium sized bowl, combine the flour, cocoa, baking powder and salt.
5. Add the dry ingredients to the egg mixture and mix until well combined.
6. Pour the batter into the prepared pan and spread evenly.
7. Bake for 20-25 minutes, or until a toothpick comes out with a few moist crumbs.

TO MAKE THE CHEESECAKE FILLING:

1. In a large bowl, beat the cream cheese, sugar and flour on low speed until well completely combined and smooth. Be sure to use low speed to reduce the amount of air added to the batter, which can cause cracks. Scrape down the sides of the bowl.
2. Add the sour cream and mix on low speed until well combined.
3. In a small bowl, combine the Kahlua and coffee granules and stir until the granules are dissolved.
4. Add Kahlua mixture and vanilla extract to the cream cheese mixture and mix on low speed until well combined.
5. Add the eggs one at a time, mixing slowly to combine after each addition. Scrape down the sides of the bowl as needed to make sure everything is well combined.
6. When the brownie is done baking, reduce the oven temperature to 300°F (148°C). Remove the brownie from the oven and pour the cheesecake batter evenly over the brownie.
7. Wrap the outside of the pan with aluminum foil, then place the springform pan inside another larger pan. (See my tutorial for preventing springform pans from leaking.) Fill the outside pan with enough warm water to go about halfway up the sides of the springform pan. The water should not go above the top edge of the aluminum foil on the springform pan.
8. Bake for 1 hour 15 minutes. The center should be set, but still jiggly.
9. Turn off the oven and leave the door closed for 30 minutes. The cheesecake will continue to cook, but slowly begin to cool as well.
10. Crack the door of the oven for 30 minutes to allow the cheesecake to continue to cool slowly. This process helps prevent cracking.
11. Remove the cheesecake from the oven and water bath wrapping and refrigerate until firm, 5-6 hours or overnight. Once completely cool and firm, remove from the springform pan.

TO FINISH OFF THE CHEESECAKE: 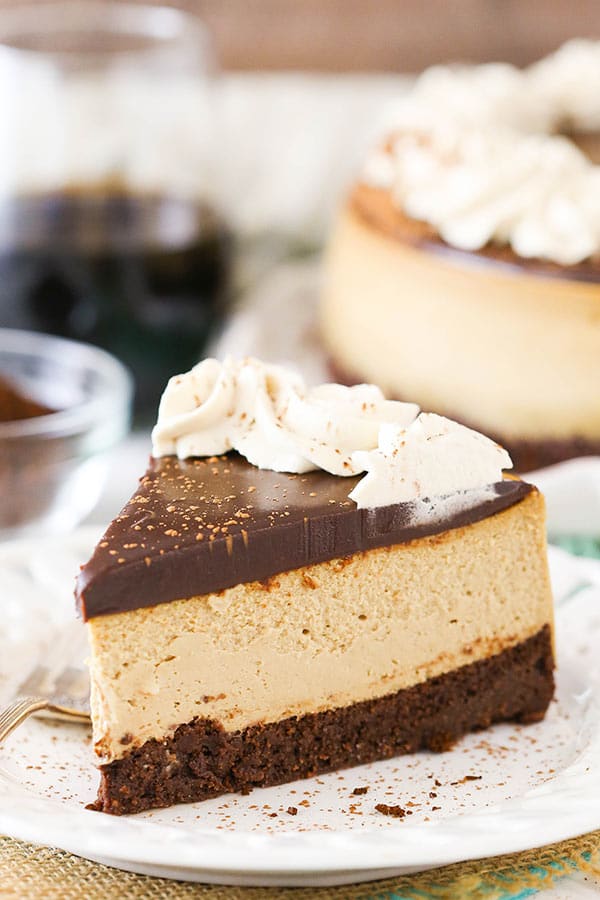