This Italian Cream Cake has three layers of moist cake filled with shredded coconut and toasted pecans! It’s filled and frosted with a whipped cream cheese frosting for a lovely light and classic cake!

What is Italian Cream Cake?

The origin of Italian cream cake doesn’t really seem to be known. And despite it’s name, it’s not exactly Italian in origin. It’s really more of a southern cake defined by the addition of coconut and pecans and cream cheese frosting.

Funnily enough, despite living in the south in my entire life, this is a cake that I had never actually tried until recently. It’s never something my family has ever had, nor have I really seen it around much. But after getting several requests for a recipe for Italian Cream Cake, I went on the hunt to track some down to try it.

I found some at my favorite bakery in our area north of Atlanta. The cake had wonderful flavor, the coconut and pecan complemented everything beautifully and the whipped cream cheese frosting was so light that I couldn’t stop eating it! Such a tasty cake!

How to make Italian Cream Cake

So after my taste testing, I set out to make this cake at home. Traditionally an Italian cream cake is made with a combination of butter and shortening. I wanted to be sure that I had the best version of this cake, so I actually started out with my Moist Vanilla Layer Cake, which I love, and worked from there. After adjusting for the various ingredients needed for this cake, what resulted was quite similar to the other recipes that you would find for this cake. The primary ingredients I played around with where the butter versus shortening and the flavorings.

I personally felt that the butter and shortening combination lent a flavor that slightly better complemented the pecans and coconut. That said, the all butter version was just fine and will work if you truly don’t want to you use shortening.

The other thing I preferred was the addition of just a touch of almond extract. Not enough to take over the cake at all, but just enough to ramp up the flavor a tad. It leaves you thinking, “What is that yummy little bit of extra flavor?” Unless you give away your secret, no one will ever know. Of course you could leave it out, if you prefer. 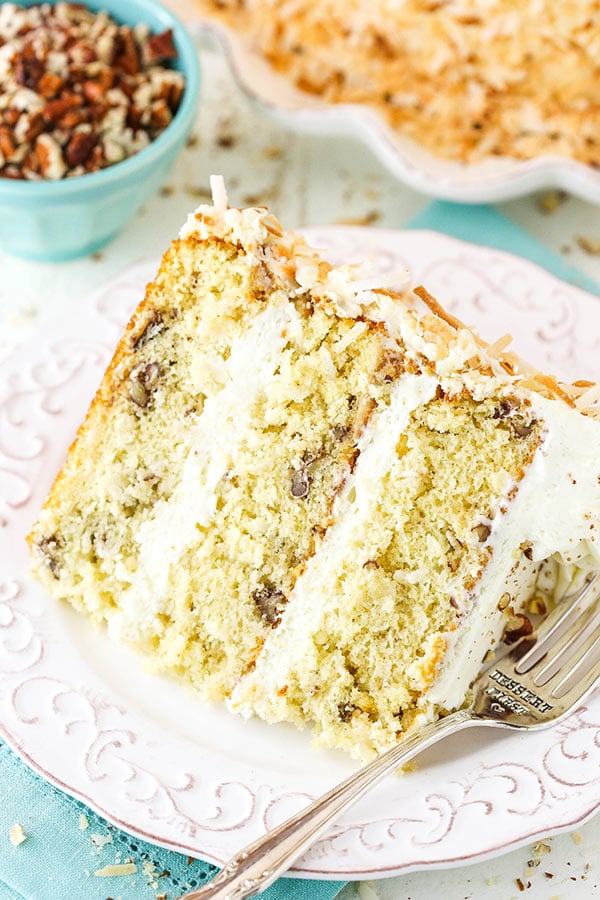 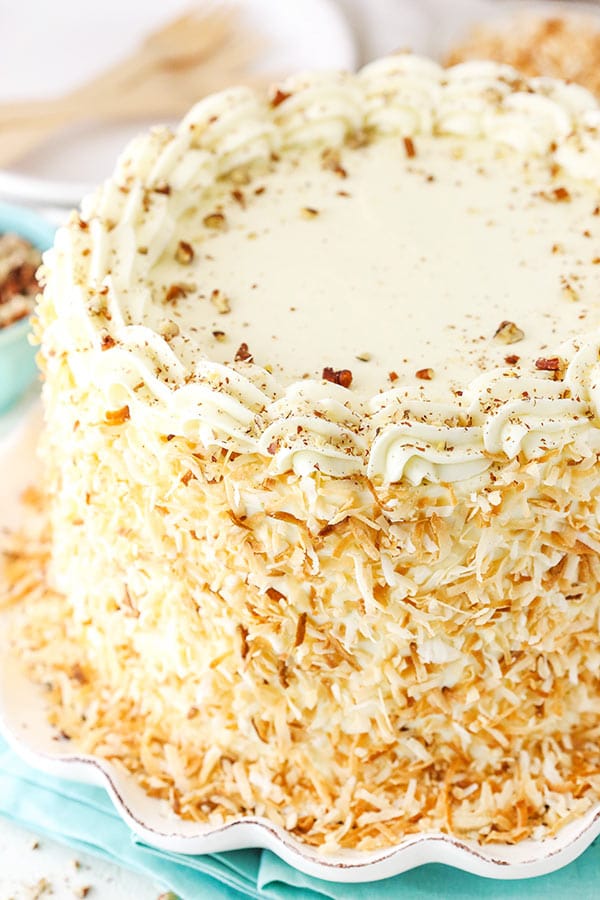 A few other important parts of an Italian Cream Cake:

Buttermilk – The buttermilk gives the cake some extra flavor, as well as helps react with the baking soda to give the cake rise. I don’t suggest making substitutions. I use powdered buttermilk, which is nice because you don’t have to buy a whole carton and then throw most of it away. The powdered buttermilk keeps for a while. Yay!

Coconut and Pecans – The coconut is pretty straightforward. Just sweetened shredded coconut. But for the pecans, you want to chop them and make sure they are toasted before adding them to the cake batter. It makes a huge difference in the flavor of the cake if you don’t toast them before hand and it’s not a good difference.

From there, putting the cake together is pretty straightforward. I chilled the cake for about 15-20 minutes after layering it and before frosting the outside, but otherwise it’s build and frost as usual. If you aren’t as familiar with building layer cakes, definitely check out my tutorial.

This Italian Cream Cake is delicious! It’s a fairly unique combination and yet it all works quite well together. I love the texture that the coconut and pecans give the cake, not to mention the flavors of them along with the light almond flavor. When you add the whipped cream cheese frosting, it’s like a little bit of cake heaven! If you haven’t tried it before, like I hadn’t, now’s your chance! 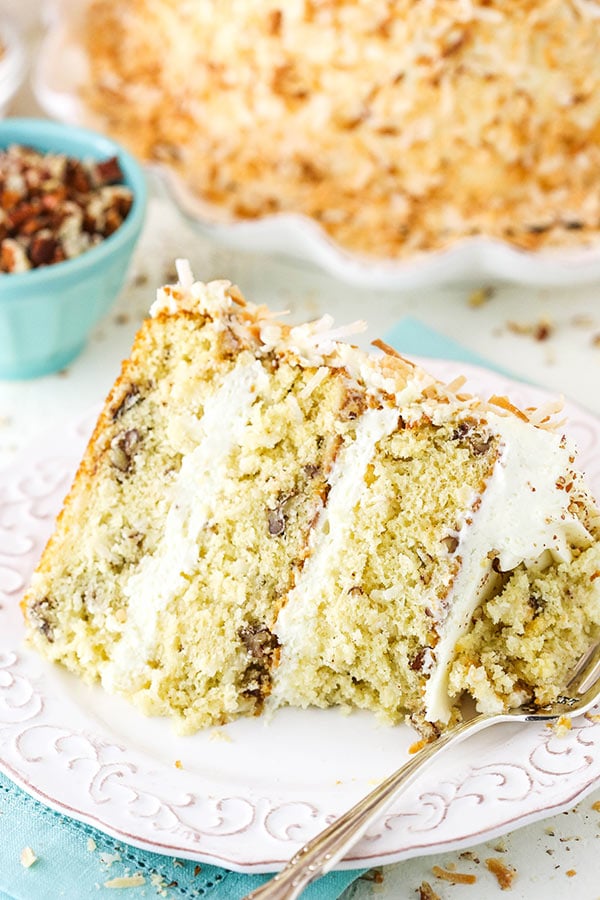 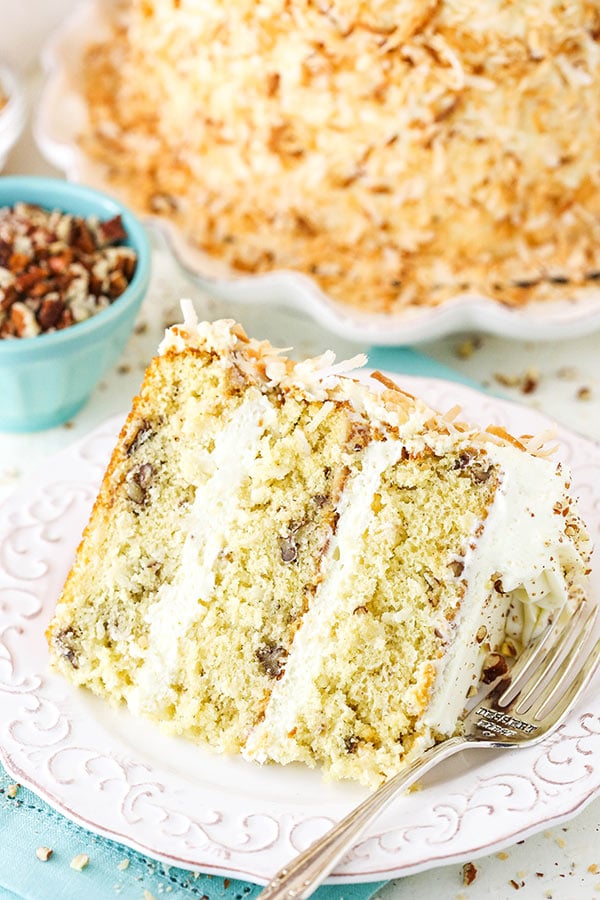 This Italian Cream Cake has three layers of moist cake filled with shredded coconut and toasted pecans! It’s filled and frosted with a whipped cream cheese frosting for a lovely light and classic cake!

NOTE: Shortening is traditionally used in an Italian Cream Cake and I find the flavor better compliments the coconut and pecans. That said, the cake will work perfectly fine with all butter, if you prefer.

I use powdered buttermilk.