These moist and fluffy Tiramisu Cupcakes are irresistible! Each cupcake is filled with tiramisu cream and topped with a light Kahlua mascarpone buttercream. 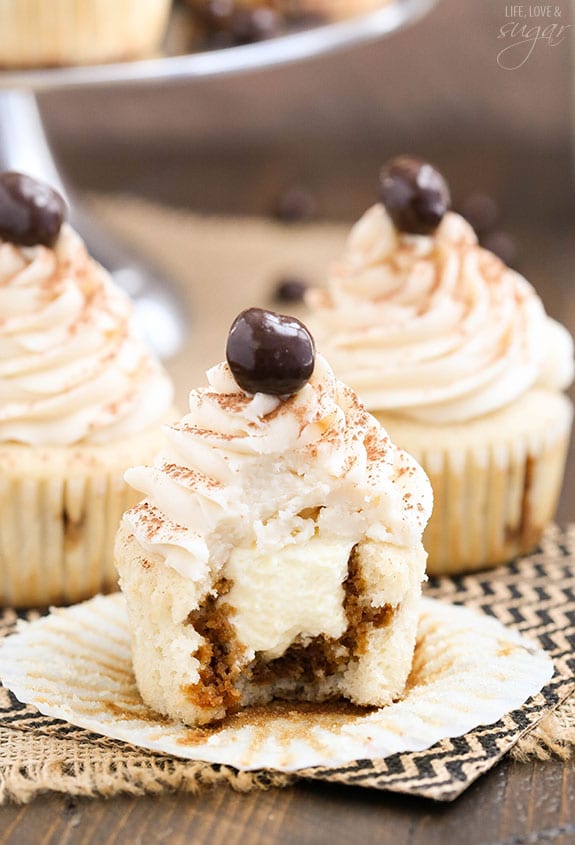 I hope you had a great new years weekend! I spent it with my parents and some friends I’ve known since elementary and middle school. It was so nice. There was certainly lots of football watching given all the bowl games. And as we are getting into NFL playoff season (yay Panthers!), I’m pretty sure I’ll be making these Eggless Chocolate Chip Cookie Dough Footballs again soon. They are perfect for football watching. 🙂 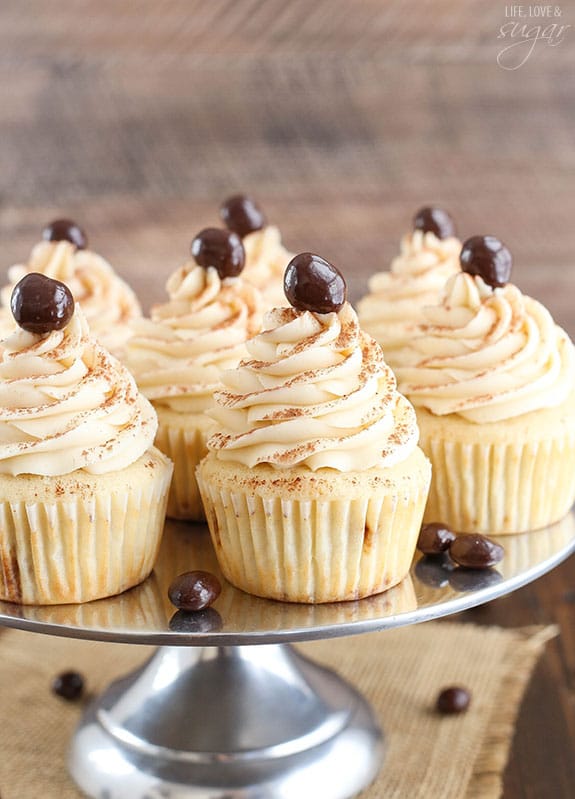 Though I don’t really believe in New Year’s resolutions because I think you can and should make a change whenever you see the need, I have spent some time this past week reflecting over the past year and thinking about the coming year over. There have been some truly amazing things happening that I am so excited and thankful for. If you’ve followed our struggle with starting a family, you know that’s one thing that’s not been terribly easy. I feel like lately I’ve had a tendency to focus on that one thing that isn’t right and not fully appreciate all the things that are so good.

Since realizing that I’ve decided to change my focus. I’m reminded that I have to let go of the things I can’t control and let God. It’s such a freeing feeling. And I am SO PUMPED for 2016 and all that God has in store for us. I don’t know what it’ll be but I think it could just be our best year yet. 🙂 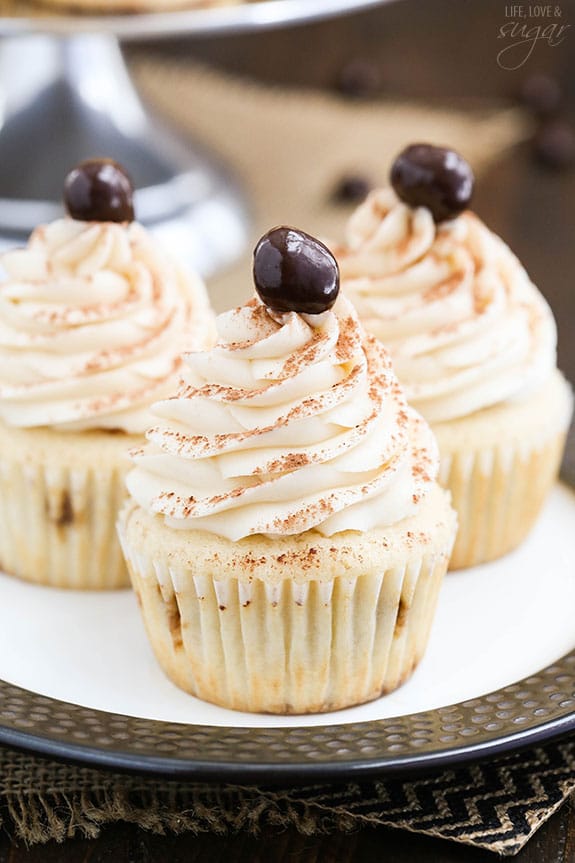 And kicking it off with these cupcakes is definitely an awesome way to get started. They are setting the tone with how yummy they are. Irresistible really. If you love tiramisu, these cupcakes are your new favorite dessert. I could seriously just sit down with a spoon and a bowl of tiramisu filling and be a happy camper. It’s the bomb.com (yes, I still live in the 90s in my head). 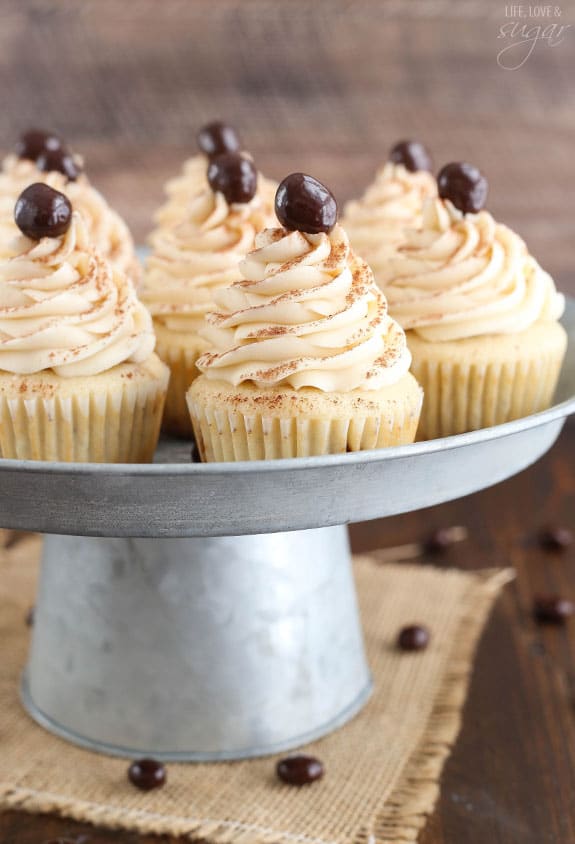 How to Make Tiramisu Cupcakes

I started off with a new vanilla cupcake. Perhaps you are familiar with these vanilla cupcakes? Well, this is a new recipe. It’s a little more traditional and uses the creaming method. They are equally as awesome but are a lighter cupcake.

Once they are baked and cooled, cut out the center. It’s a shame to have to do it, but the filling is worth it. If you end up a little left over filling, I suggest tossing the cupcake cores into a bowl with the filling and devouring it. 🙂

I’m a big fan of combining espresso and Kahlua in my tiramisu, but if you prefer a non-alcoholic version you can definitely replace the Kahlua with more espresso. Drizzle the espresso over the hole in the cupcake. The more the merrier in my opinion. 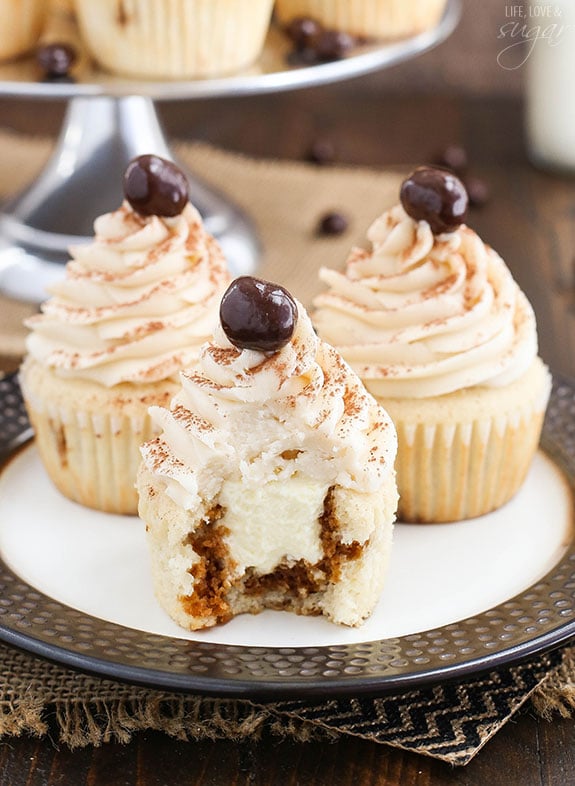 Fill that hole with the tiramisu filling, then pipe on the buttercream. The buttercream uses a mix of butter and mascarpone cheese, which is also in the tiramisu filling. It’s got such a wonderful flavor and isn’t too sweet. The method is a little different than my usual buttercream. You might be temped to add the mascarpone cheese at the same time you add the butter, but I really don’t advise it. Mascarpone cheese seems to get softer the more you beat it and then it doesn’t firm up as well when refrigerated again. Because of that, I suggest carefully folding it in just before the final bit of powdered sugar is added.

I’ve already said it, but I’ll say it again. These cupcakes rock. There’s nothing better than homemade tiramisu, and homemade tiramisu cupcakes are easy just as awesome. Let’s both start our new year out right and enjoy these babies together. What do you say? 🙂 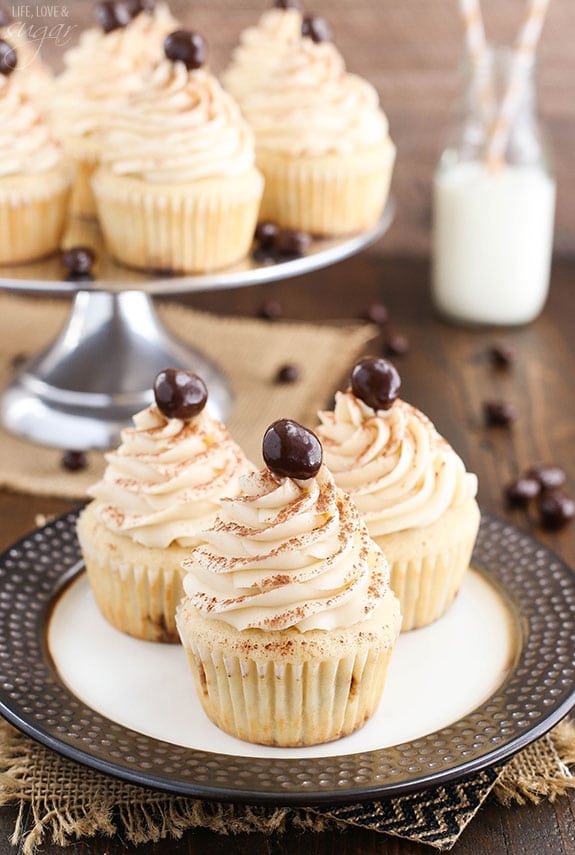 Make the Filling & Fill the Cupcakes

Store in the refrigerator. When ready to serve, I recommend letting them sit out for 20-30 minutes, so they aren’t too cold and firm.