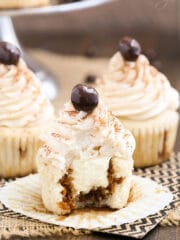 1. Preheat oven to 350 degrees and prepare a cupcake pan with cupcake liners.
2. Beat butter and sugar until light in color and fluffy, about 2-3 minutes.
3. Add vanilla extract and sour cream and mix until well combined.
4. Add egg whites in two batches, mixing until well combined.
5. Combine dry ingredients in another bowl, then combine milk and water in another bowl.
6. Add half of the dry ingredients to the batter and mix until well combined. Add the milk mixture and mix until well combined. Add remaining dry ingredients and mix until well combined.
7. Fill cupcake liners about halfway. Bake for 15-17 minutes, or until a toothpick inserted comes out with a few crumbs.
8. Remove cupcakes from oven and allow to cool for 2-3 minutes, then remove to cooling rack to finish cooling.
9. While cupcakes cool, make the filling. Combine egg yolks and sugar in the top of a double boiler, over boiling water. If you don’t have a double boiler, you can use a metal mixing bowl set over a pot with simmering water in it.
10. Cook for about 6-8 minutes, with heat on low, stirring constantly, or until mixture is light in color and sugar is dissolved. If mixture starts to get too thick and a darker yellow, it’s overcooked.
11. When done, whip yolks with mixer until they thicken and yellow a bit.
12. Fold mascarpone cheese into whipped yolks.
13. Add heavy whipping cream to another mixer bowl and whip until stiff peaks form, about 5-7 minutes.
14. Fold whipped cream into mascarpone mixture.
15. In another small bowl, combine warm water, espresso and Kahlua.
16. Once cupcakes are cool, cut out the centers. I use a cupcake corer.
17. Drizzle about 1 tbsp of the espresso mixture over the inside of the holes of the cupcakes, then fill in the holes with the tiramisu filling.
18. To make the frosting, beat the butter until smooth.
19. Add 2 cups of powdered sugar and 1 tbsp of Kahlua and mix until smooth.
20. Add another cup of powdered sugar and remaining Kahlua and mix until smooth.
21. Carefully fold in the mascarpone cheese.
22. With mixer on low speed, add the remaining cup of powdered sugar and mix just until smooth. You don’t want to over mix the msacarpone cheese or it could become too thin.
23. Pipe the frosting onto the cupcakes and sprinkle with some cocoa and top with chocolate covered espresso beans, if desired.
Store in the refrigerator. When ready to serve, I recommend letting them sit out for 20-30 minutes, so they aren’t too cold and firm.