This Caramel Apple Blondie Cheesecake has an apple blondie “crust”, a spiced caramel filling and is topped with caramel sauce, cinnamon apples and cinnamon whipped cream! It’s the perfect dessert for fall and Thanksgiving!

New to making cheesecakes? Then definitely check out my post with 10 tips and tricks for the perfect cheesecake.

If you’ve hung around my site for a while, it’s possible you’ve already made my original Caramel Apple Blondie Cheesecake that I posted way back in 2014. That version is fairly similar but the main difference is that the cheesecake itself is no-bake. So you have a baked blondie on the bottom still, but then the rest is no-bake.

While that is certainly a little quicker, I’ve gotten asked many times over the years about how to make it into a baked cheesecake. So I finally got around to doing a baked version – and here it is!

I think a natural question to have is, “Which is better?” Well I think that may be a subjective opinion kind of thing and could also depend on how important ease of making is to you. But I will say this – a baked cheesecake tends to have richer flavor and this one definitely does, in my opinion. Overall, the thicker, richer texture and flavor just adds a little more “umph” to this one. Now that doesn’t mean the original isn’t wonderful, because it is. They’re just a little different. And honestly, you can’t go wrong with either.

But assuming you want the baked version, let’s talk a little more about it. 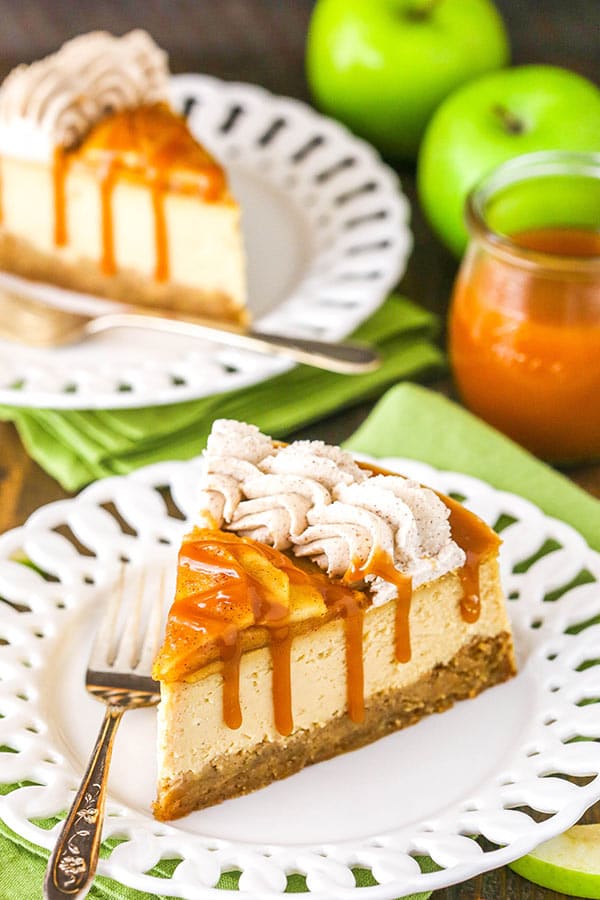 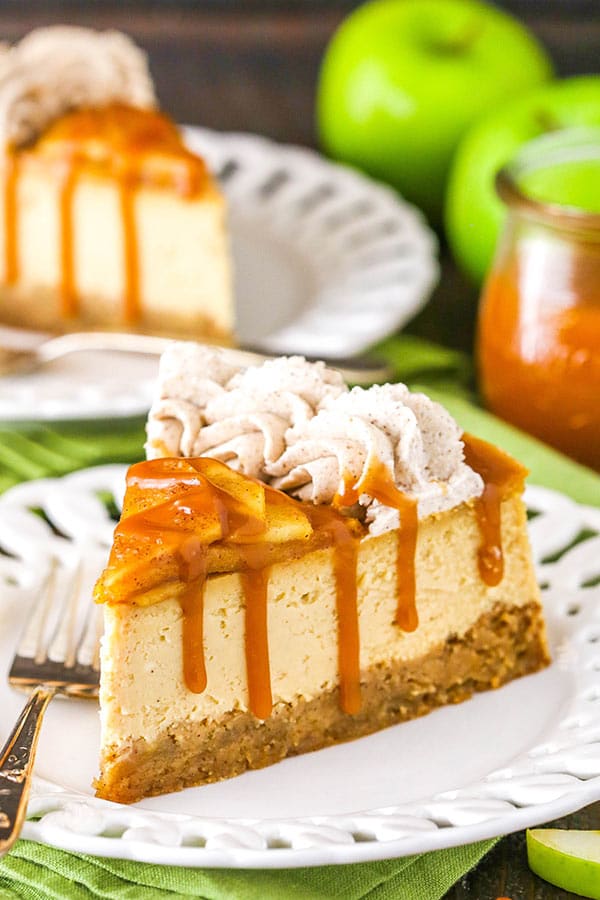 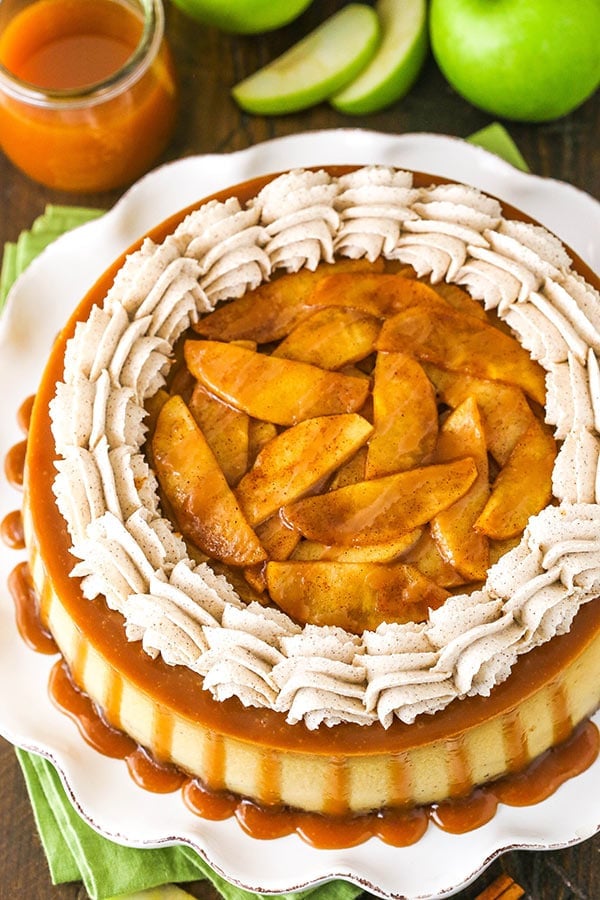 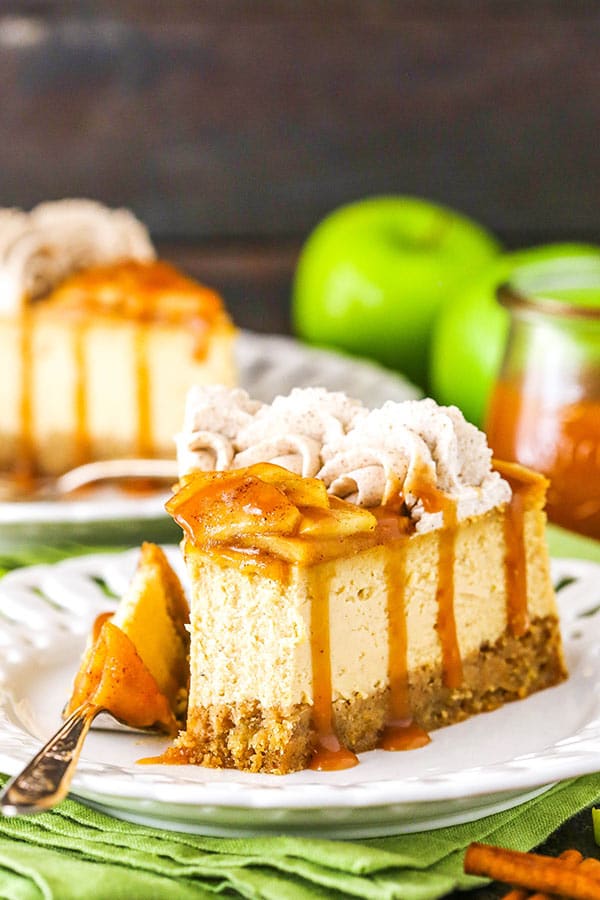 To get started with this cheesecake, you’ll make the blondie base. It’s pretty simple to make. Just combine your dry ingredients first. Then whisk together your melted butter and brown sugar, add the egg and vanilla extract and it’s time for the dry ingredients. Finally stir in your chopped apples.

Bake the blondie in the same 9 inch springform pan that you’ll make the cheesecake in. You want to be sure it’s the right size for the cheesecake.

After it’s baked, I like to remove the sides of the pan and clean it off so that you don’t get any crumbs or anything left behind from the blondie on the sides of the cheesecake. Then add the sides back on and you can make your filling.

The filling is pretty similar to my other cheesecakes. The differences here being the addition of brown sugar, caramel sauce and spices. You’ll combine everything in order, being sure to use a low mixing speed. The higher the speed, the more air you’ll add to your filling, which can wind up giving you cracks in your cheesecake.

Add your cheesecake filling right to the top of the blondie and then bake it. No need to worry about the blondie – it doesn’t get over-baked or dry. It actually gets even more moist!

After baking and cooling in the oven, refrigerate the cheesecake until it’s cold and firm. 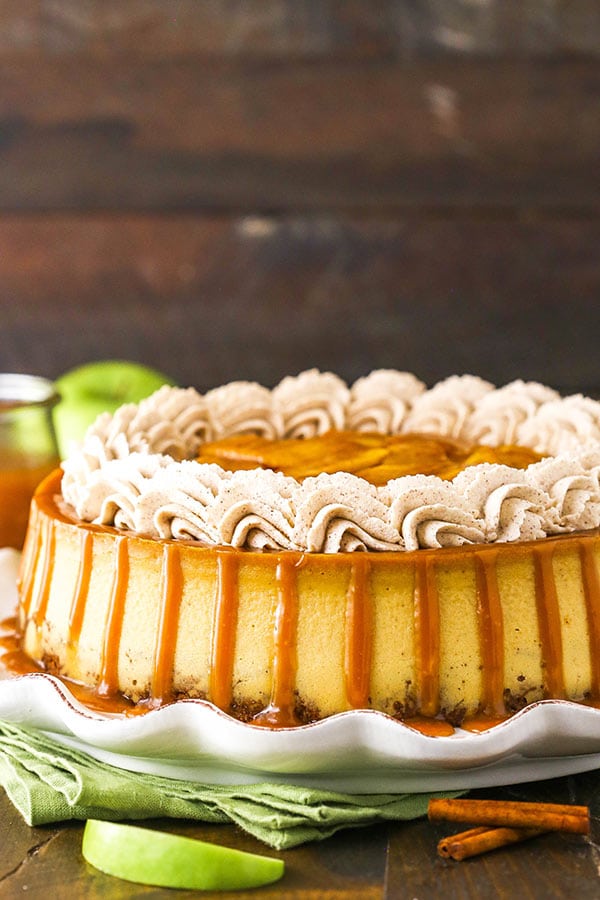 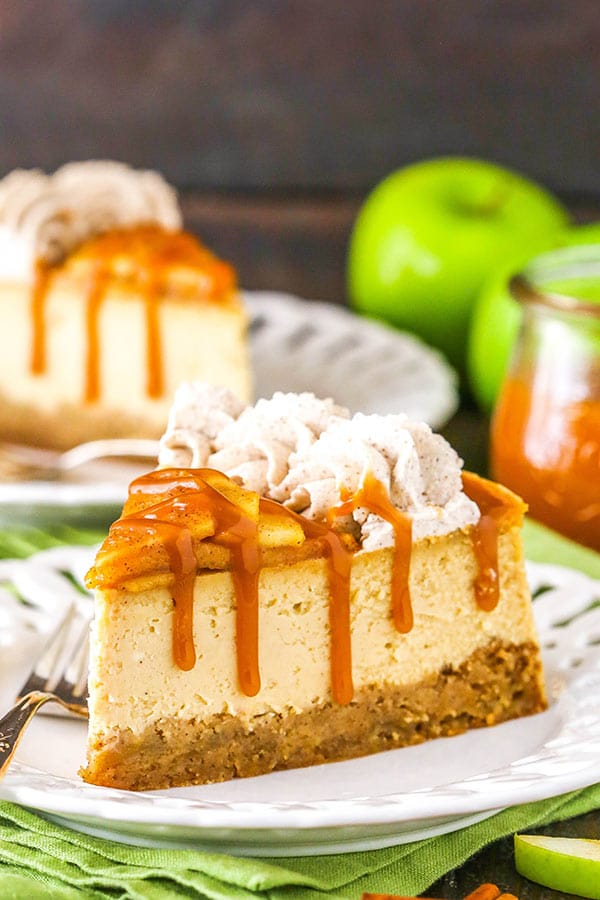 When your cheesecake is baked and cooled, you can add your cinnamon apples, which are cooked quickly on the stove, the caramel sauce and the cinnamon whipped cream.

One of the great things about this cheesecake is that it can easily be made ahead of time. Cheesecakes do quite well for several days in the fridge, so you could make the cheesecake portion a day or two ahead and then add the finishing touches the day you serve it. Depending on if you want your apples on top to be warm or cool, you could add them hours before serving, or just before. It’s delicious either way, but I can’t deny that warms apples are quite lovely.

I hope you enjoy this wonderful cheesecake! It’s so full of flavor! If you’ve tried the original version before and decide to give this a try, I’d love to hear which you prefer!

This Caramel Apple Blondie Cheesecake has an apple blondie “crust”, a spiced caramel filling and is topped with caramel sauce, cinnamon apples and cinnamon whipped cream! It’s the perfect dessert for fall and Thanksgiving!

1. Make the caramel sauce linked in the ingredients above and set aside to cool.
2. To make the apple blondie, prepare a 9-inch springform pan with a parchment paper circle in the bottom and grease the sides. Preheat oven to 350°F (176°C).
3. Combine the flour, baking powder, salt, cinnamon and nutmeg in a medium sized bowl and set aside.
4. In a large mixing bowl, whisk the melted butter and brown sugar together until well combined.
5. Add the egg and vanilla extract and whisk together until well combined.
6. Add the dry ingredients and whisk together until well combined. Fold in the chopped apple, then spread the batter evenly in the prepared pan.
7. Bake for 28-32 minutes or until a toothpick inserted in the middle comes out clean.
8. While the blondie bakes, make the cheesecake filling. In a large bowl, beat the cream cheese, brown sugar and flour on low speed until well combined and smooth. Be sure to use low speed to reduce the amount of air added to the filling, which can cause cracks. Scrape down the sides of the bowl.
9. Add the sour cream, caramel sauce, vanilla extract, cinnamon and nutmeg and mix on low speed until well combined.
10. Add the eggs one at a time, mixing slowly to combine after each addition. Scrape down the sides of the bowl as needed to make sure everything is well combined. Set aside until the blondie is done baking.
11. When the blondie is done baking, reduce the oven temperature to 300°F (148°C). Remove the blondie from the oven and pour the cheesecake batter evenly over the blondie (I like to remove the blondie and wash the pan, then add a new parchment circle and re-spray the sides of the pan with non-stick spray before adding the cake blondie to the pan and adding the cheesecake filling on top, but you don’t have to. I just think the sides come out nicer that way).
12. Wrap the outside of the pan with aluminum foil, then place the springform pan inside another larger pan. (See my tutorial for preventing springform pans from leaking. I also like to use a slow cooker liner.) Fill the outside pan with enough warm water to go about halfway up the sides of the springform pan. The water should not go above the top edge of the aluminum foil on the springform pan.
13. Bake for 1 hour 40 minutes. The center should be set, but still jiggly.
14. Turn off the oven and leave the door closed for 30 minutes. The cheesecake will continue to cook, but slowly begin to cool as well.
15. Crack the door of the oven for 30 minutes to allow the cheesecake to continue to cool slowly. This process helps prevent cracking.
16. Remove the cheesecake from the oven and water bath wrapping and refrigerate until firm, 5-6 hours or overnight. Once completely cool and firm, remove from the springform pan.
17. To make the cinnamon apples, combine the apples, lemon juice, nutmeg, cinnamon and brown sugar in a medium saucepan and toss to coat.
18. Add the butter and cook apples on medium-high for about 15 minutes, or until at preferred softness. Set aside to cool a bit.
19. To make the whipped cream, add the heavy whipping cream, powdered sugar, vanilla extract and cinnamon to a large mixer bowl. Whip on high speed until stiff peaks form.
20. Drizzle some of the remaining caramel sauce down the sides of the cheesecake, then pipe the whipped cream around the outer edge. Finish it off with the cinnamon apples in the center, a little more caramel sauce, then serve. I recommend serving the cheesecake cold with the apples warm, but you can definitely store leftovers in the fridge and eat it all cold as well. The cheesecake should be well covered and refrigerated and consumed within 4-5 days or as long as the apples hold up.