Caramel Apple Cupcakes made with a spiced apple cupcake topped with caramel buttercream. They melt in your mouth and are such a delicious apple dessert idea!

This recipe uses my Easy Salted Caramel Sauce as an ingredient. It’s the best caramel ever!

So today’s recipe is actually an update of a recipe from back in 2015. The older version was based on my very first vanilla cupcake recipe I shared on this site. It was a much denser cupcake. Today’s update is based on my new Easy Homemade Vanilla Cupcakes, which are light and fluffy and have been a favorite for a while now. Given that I love the new vanilla cupcakes so much, it seemed appropriate to update this wonderful fall dessert with my BEST version!

Despite the update, the flavors and such are quite similar. It’s the execution that’s a bit different. These cupcakes are still full of cinnamon, nutmeg, brown sugar, apples and caramel. But they now use the more traditional creaming method and ultimately come out quite differently in texture. 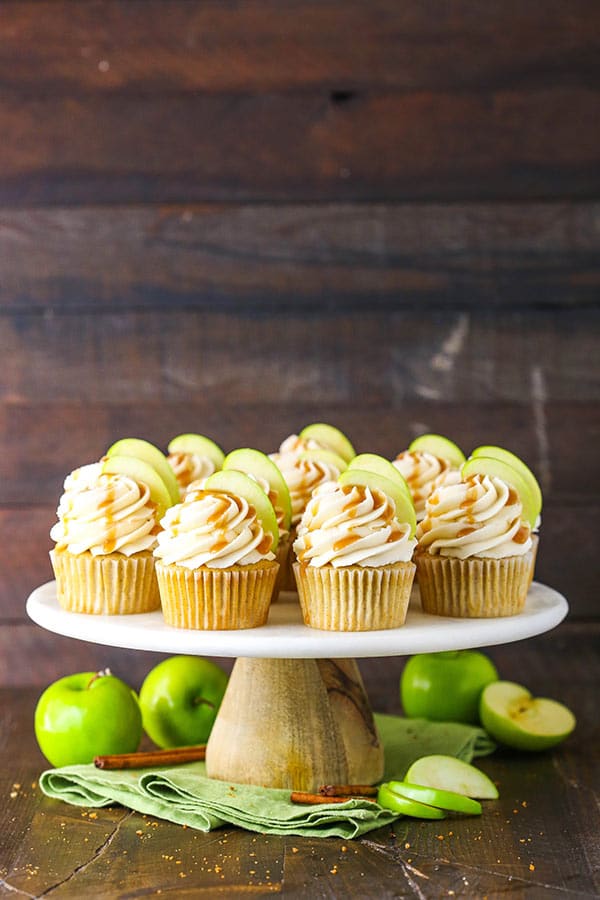 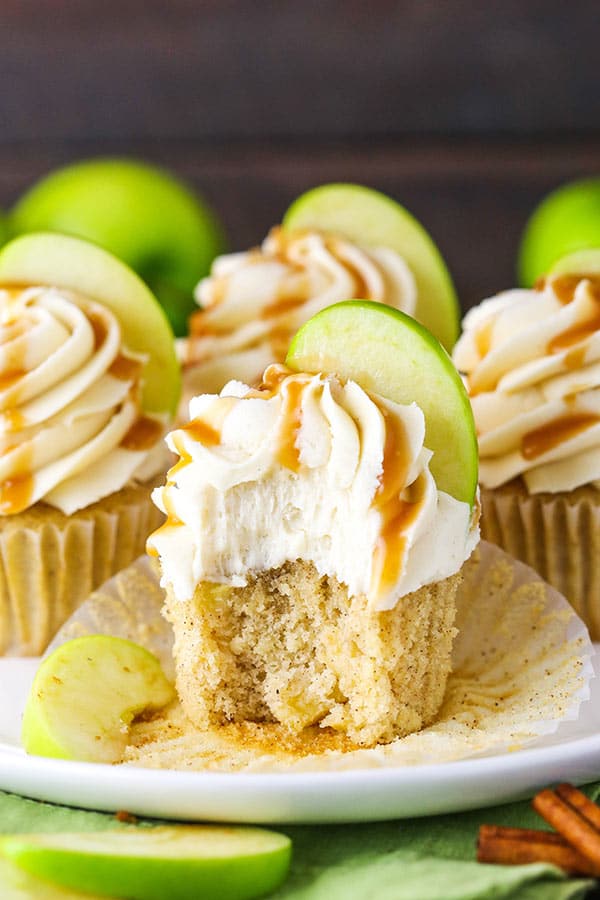 While you don’t really need to hear all about every ingredient, I thought I’d highlight the more significant ones:

Naturally, this buttercream has plenty of butter in it. Additionally, you’ll find: 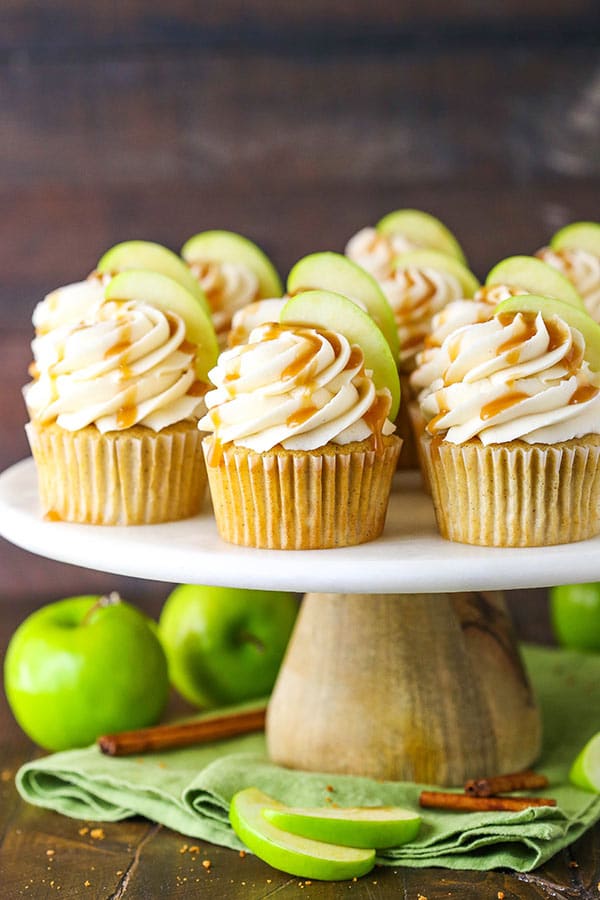 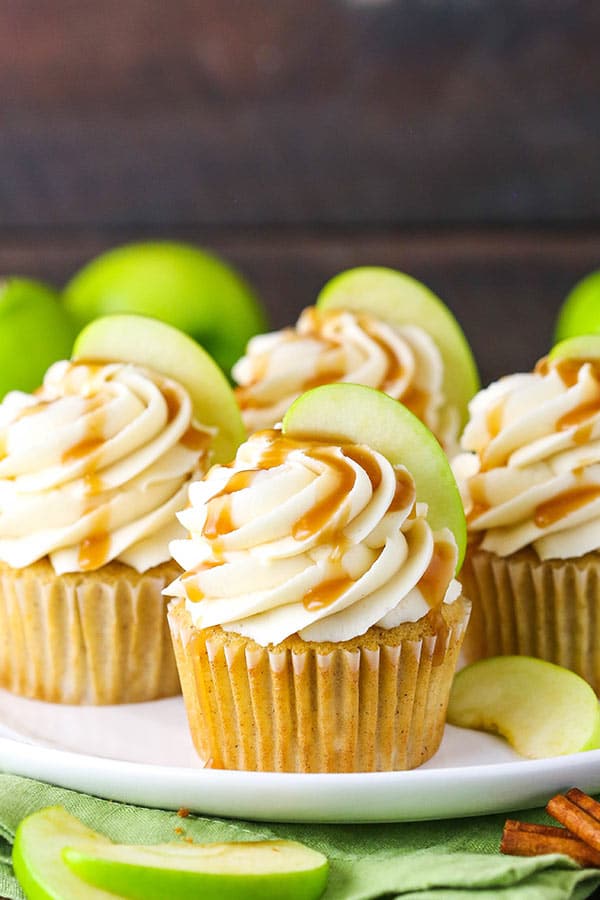 How to make Caramel Apple Cupcakes

As mentioned before, these cupcakes use the creaming method. So to get started, you’ll combine your butter, oil and sugars and cream them together for about three minutes. Don’t skimp on that time! It adds air to the batter that helps the cupcakes rise. You’ll actually be able to see a noticeable difference in the color and texture of the mixture when it’s ready.

Next, you’ll add the vanilla and sour cream, then the eggs one at a time.

After that, you’ll alternate adding your dry ingredients and milk.

When your cupcakes are baked and cooled, you’ll make your caramel buttercream. Beat your butter until smooth, then add about half of the powdered sugar.

Add some of the caramel sauce next, then add the remainder of the powdered sugar.

Now that you know just how thick your powdered sugar is, you can add more caramel sauce until you have both the consistency and flavor you want. If you’re adding the cinnamon, you can do that too.

Finally, pipe the frosting onto the cupcakes and decorate them with a caramel drizzle and apple slice.

For an even more detailed look at how to make these cupcakes, check out the video below where I walk you through the whole process. 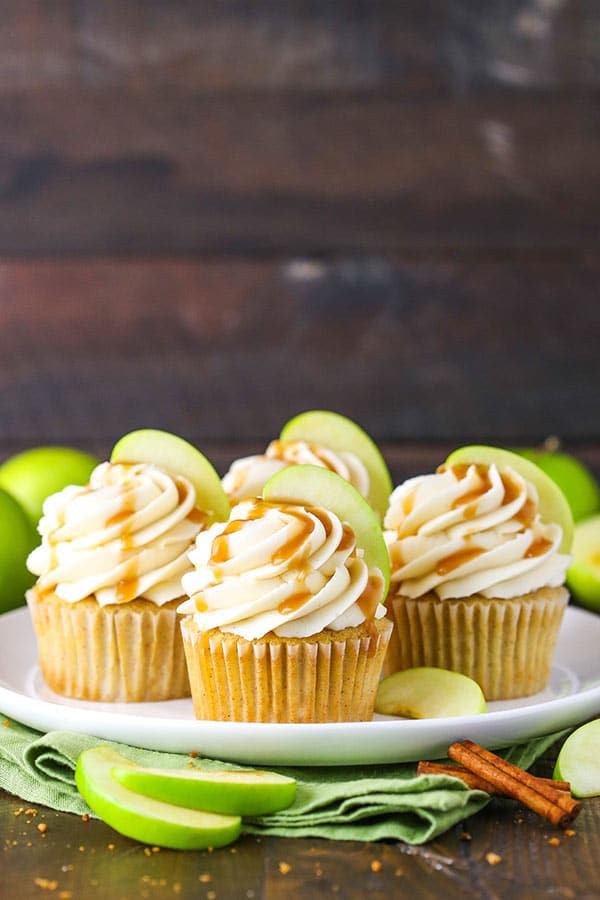 Recipe updated 8/18/2020. For the previous version of the recipe, download the PDF.

Caramel Apple Cupcakes made with a spiced apple cupcake topped with caramel icing. They melt in your mouth and are such a delicious apple dessert idea!