These Apple Streusel Cheesecake Bars are a delightful apple recipe perfect for Thanksgiving dessert. They have a buttery shortbread crust, creamy cheesecake filling and are topped with cinnamon apples and a cinnamon streusel! A delicious fall dessert and super simple way to enjoy cheesecake and apples together!

We’ve been getting pretty excited for fall around here. The boys just LOVE being outside and the afternoons here get SO hot! We’ve been loving some cooler mornings lately and can’t wait for cooler evenings.

Along with the cool weather comes the awesome fall flavors and treats. These Apple Streusel Cheesecake Bars combine some of my favorite things about fall – apple and cinnamon. And since making a full on cheesecake can be a little more involved and time consuming, these bars make a nice option. They are a little quicker and easier to put together, don’t require a water bath and are easy to serve.

To get started making these bars, you’ll make the crust. Unlike a traditional cheesecake, these bars have a shortbread crust. It makes a firmer crust that holds up really well to eating the bars.

The shortbread is a quick combination of flour, brown sugar and cinnamon. You then cut the butter into the flour mixture until it’s crumbly. Pour the mixture into a 9×13 inch cake pan and press it all together evenly. Bake for about 8 to 10 minutes. 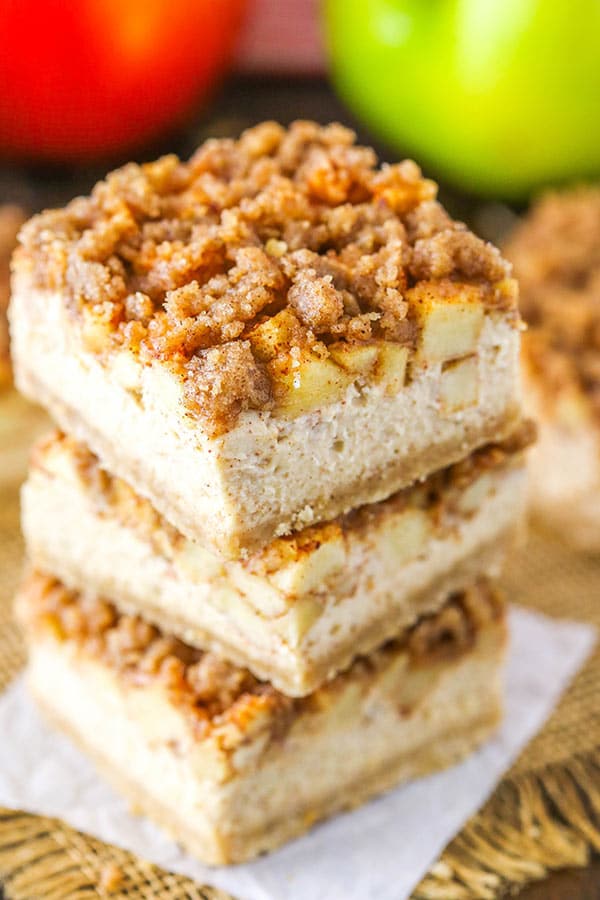 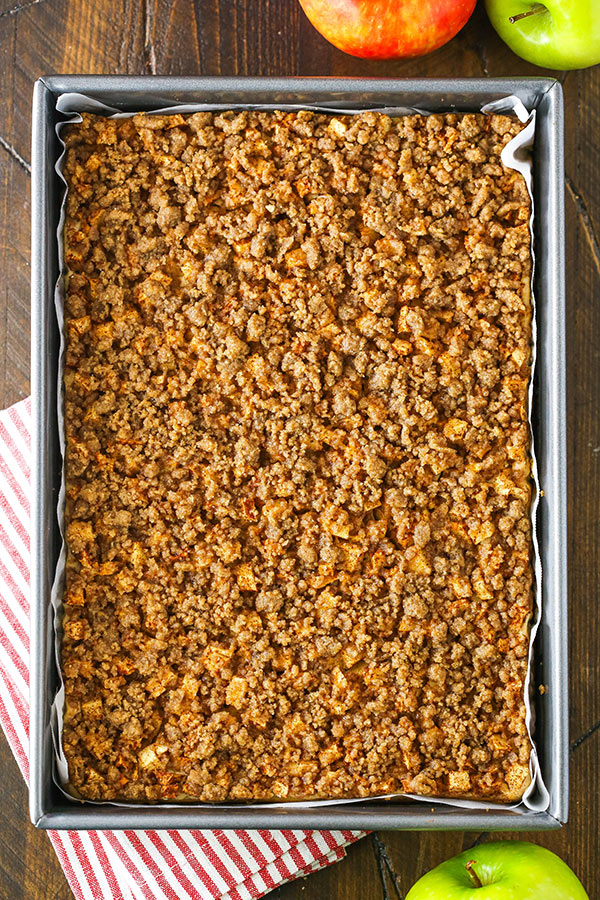 The apples can be chopped and combined with a little flour, cinnamon and nutmeg and then set aside while you put together the cheesecake filling. The flour helps to coat the apples a bit and soak up some of the moisture, while the cinnamon and nutmeg give nice flavor and make it feel like it’s fall.

What kind of apples should I use?

You can use whatever your favorite apple is. I personally think the tart flavor of Granny Smith apples work well, but Red Delicious, Honeycrisp or Gala apples would work as well. You could also use a mix of a couple different types of apples to give it even more flavor.

The cheesecake filling is a pretty straight forward filling. It uses a little less cream cheese than a full sized cheesecake, so that the bars aren’t too tall. It’s also got some brown sugar, cinnamon and nutmeg for flavor.

Spread the filling evenly on top of the shortbread crust, then top it evenly with the chopped apples. 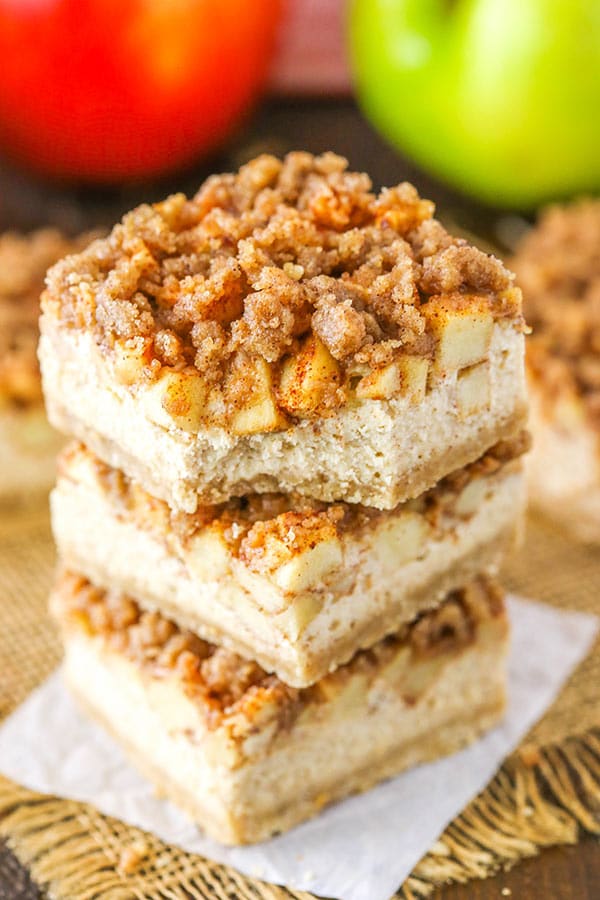 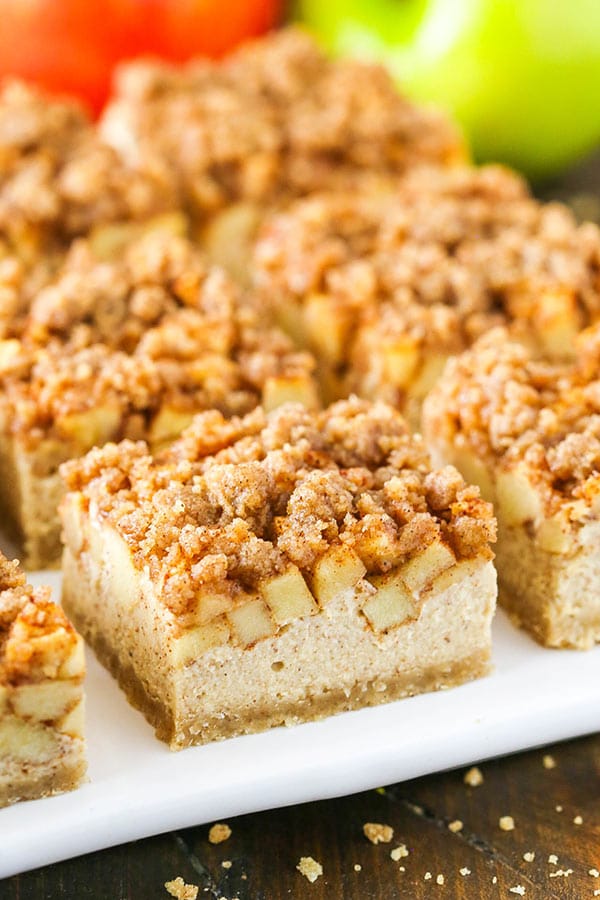 The final step is to make the streusel. You’ll combine the flour, brown sugar, cinnamon and nutmeg, then add the melted butter. Stir it all together until it’s combined and crumbly, then sprinkle it evenly over the bars.

These Apple Streusel Cheesecake Bars make a wonderful fall treat! They’re perfect for using up any apples you might have lying around and great for sharing as the holiday season starts to pick up (yay!). The combination of apples, cinnamon and streusel just makes you feel all good inside! 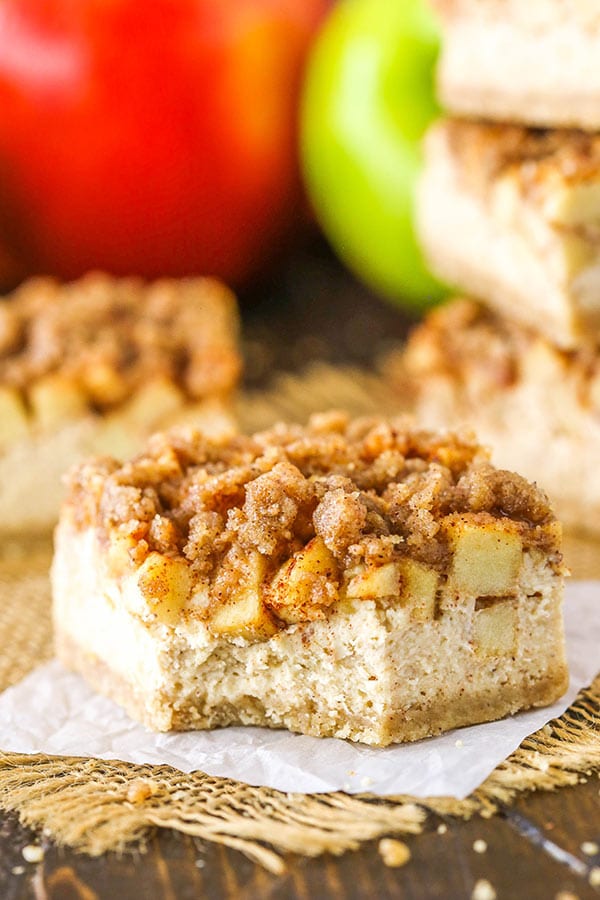 These Apple Streusel Cheesecake Bars are a delightful apple recipe perfect for Thanksgiving dessert. They have a buttery shortbread crust, creamy cheesecake filling and are topped with cinnamon apples and a cinnamon streusel!

1. Preheat oven to 300 degrees and prepare a 9×13 inch pan with parchment paper that sticks up above the sides of the pan, so that you can remove the bars later for easy cutting.
2. In a medium bowl, combine the flour, brown sugar and cinnamon.
3. Cut in butter into the flour mixture with a pastry blender or fork until mixture is crumbly.
4. Press evenly into the bottom of the pan and bake for 8-10 minutes. When the crust is done baking, turn the temperature up to 325 degrees.
5. In another large bowl, combine the chopped apples, flour, cinnamon and nutmeg and set aside.
6. To make the filling, blend the cream cheese, brown sugar and flour in a large mixer bowl on low speed until well combined and smooth. Be sure to use low speed to reduce the amount of air added to the batter. Scrape down the sides of the bowl.
7. Add the sour cream, vanilla extract, cinnamon and nutmeg and mix on low speed until well combined.
8. Add the eggs and egg white one at a time, mixing slowly to combine. Scrape down the sides of the bowl as needed to make sure everything is well combined.
9. Pour the batter into the pan with the crust and spread evenly.
10. Spread the cinnamon apples evenly over the top of the cheesecake filling.
11. In another small bowl, combine the flour, brown sugar, cinnamon and nutmeg for the streusel.
12. Add the melted butter and stir together until crumbly.
13. Sprinkle the streusel evenly over the apples.
14. Bake the bars for about 45 minutes or until the center is just set. Remove the bars from the oven and allow to cool on the counter for about 45 minutes, then refrigerate until cold and firm.
15. Use the parchment paper to remove the bars from the pan and cut into bars. Serve cold. Bars are best when stored well covered in the fridge and eaten within 4-5 days. 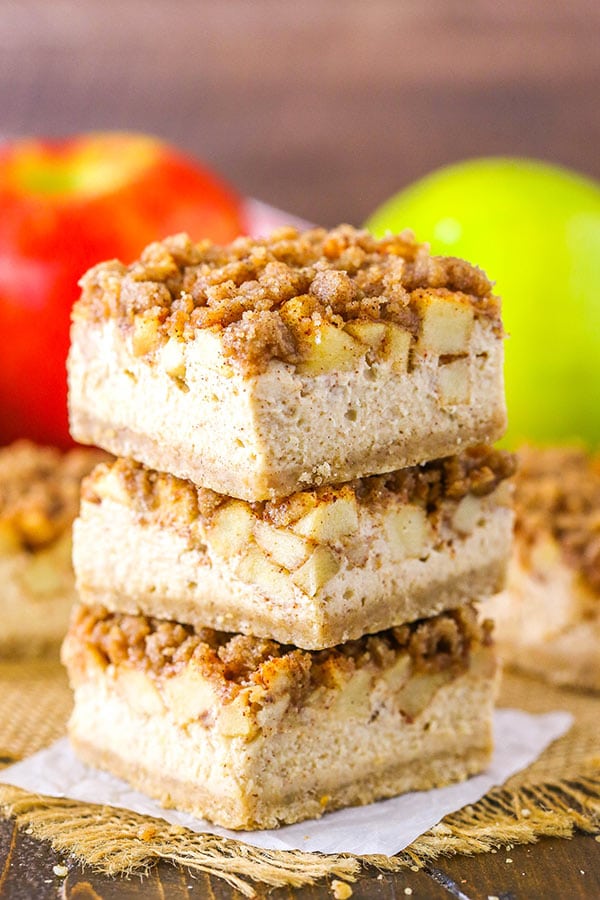