This is One Seriously Amazing French Toast Recipe

So you either think I’m totally brilliant or completely crazy right now. It’s even hard for me to decide, but I think I’m going to go with totally brilliant. And once you have a taste of this french toast, you’ll think so too. It just melts right in your mouth! If you’re looking for something special for a nice, fall/winter breakfast – this is it!

The neat thing about this is that it’s super simple and you can turn it into a couple breakfasts or even snacks. First, you’re going to need to make my pumpkin bread recipe. It makes two loaves so you can either cut the recipe in half to get one, or bake them both and eat one loaf as is and use the other loaf for this french toast. Personally, I’d go with option number two (hence being able to get a couple breakfasts/snacks out of this).

Once you’ve got your pumpkin bread ready, you can make the french toast. Now you don’t have to do it all the same day. That would be a lot for one morning. So I’d suggest making the pumpkin bread in advance. I was serious when I said you should make the two loaves, enjoy one and then a few days later make this for breakfast. The pumpkin bread holds up well for several days. You could even freeze the second loaf to pull out later for this french toast. 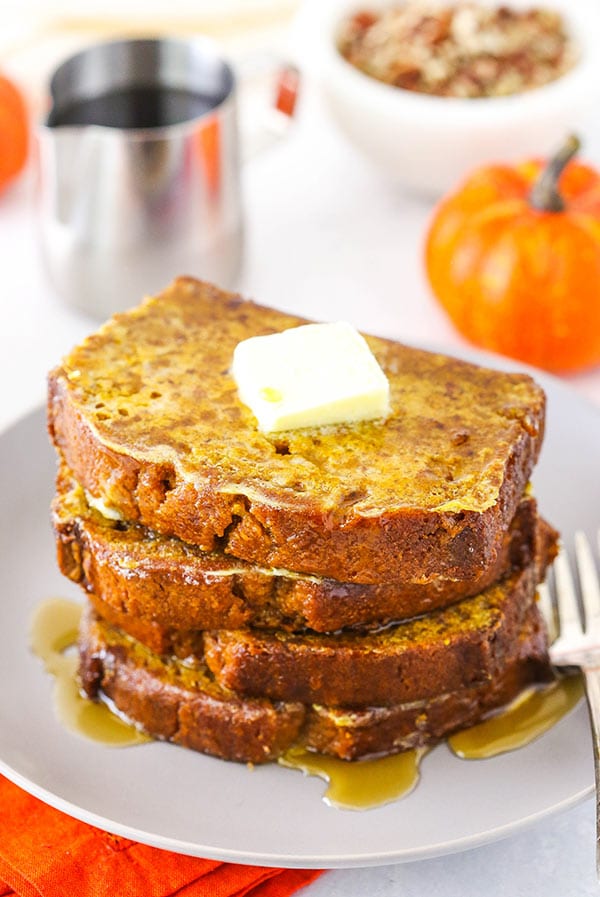 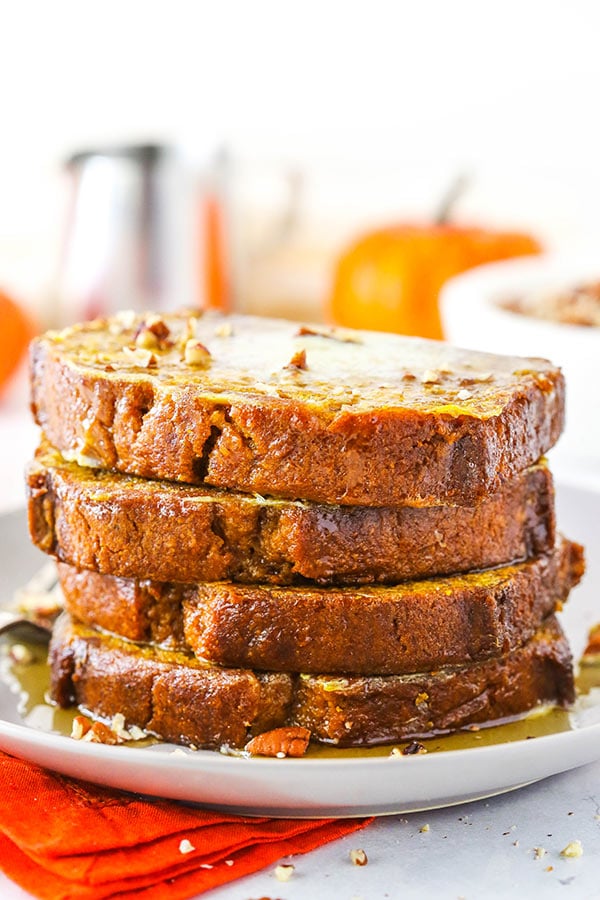 Anyhow, when you’re ready, it’s time to make the best breakfast ever.

Combine the milk, eggs, vanilla and cinnamon in a shallow dish and mix it all together. Dip the pumpkin bread into the mixture one slice at a time. I would say my slices were about half an inch in size. Coat each side in the egg mixture, and then cook it until it’s lightly brown on both sides.

Once cooked, the french toast gets a lightly eggy crust on the outside that is just amazing. It gives it just a tiny bit of crispness as you bite into it and then the pumpkin bread melts in your mouth better than any chocolate you’ve ever had. It’s SO good!

It hardly even needs syrup, but I did add it. Pile on the goodness, I say! You could even add a few chocolate chips or chopped pecans. I mean, hey, it’s fall and the holidays are coming. It’s time to enjoy allllll the good food and this pumpkin bread french toast qualifies 100%. 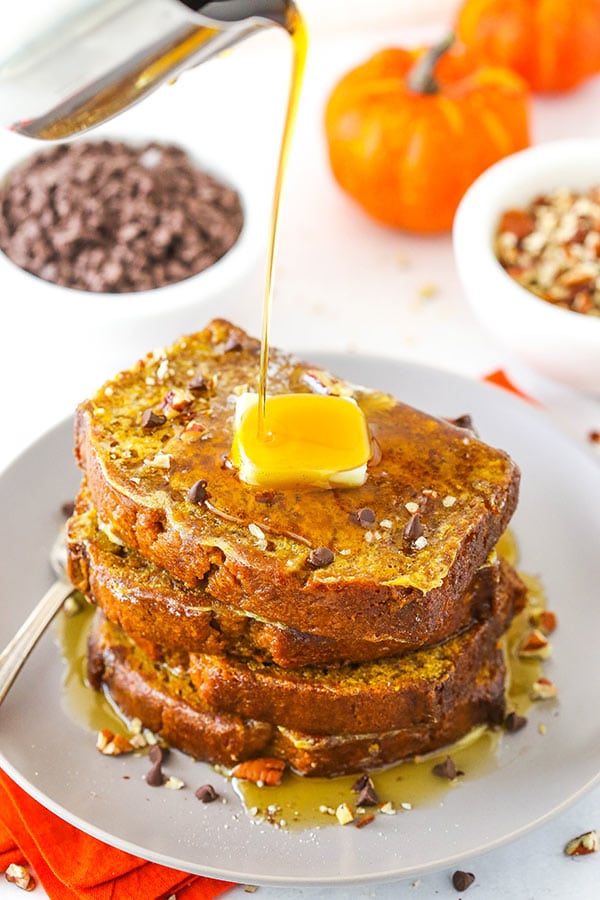 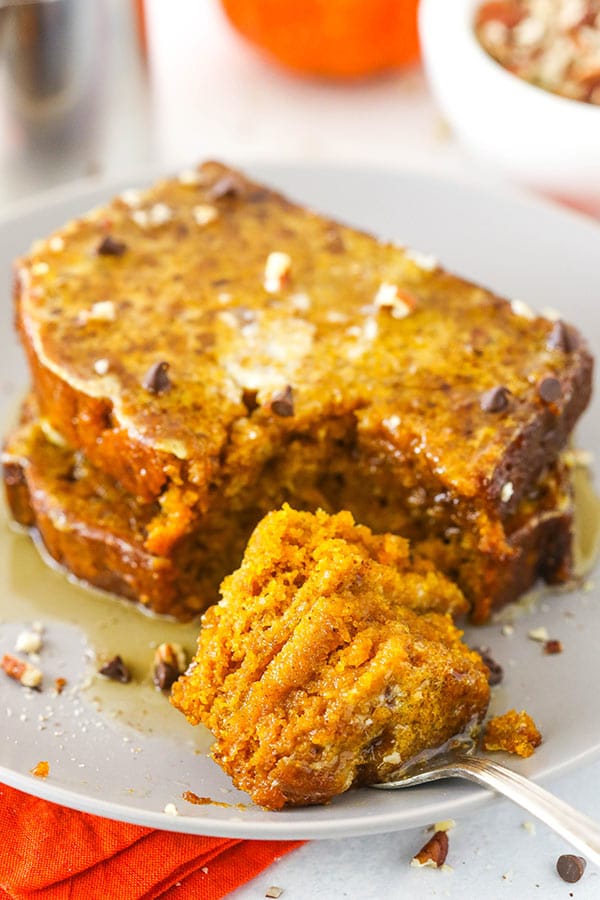 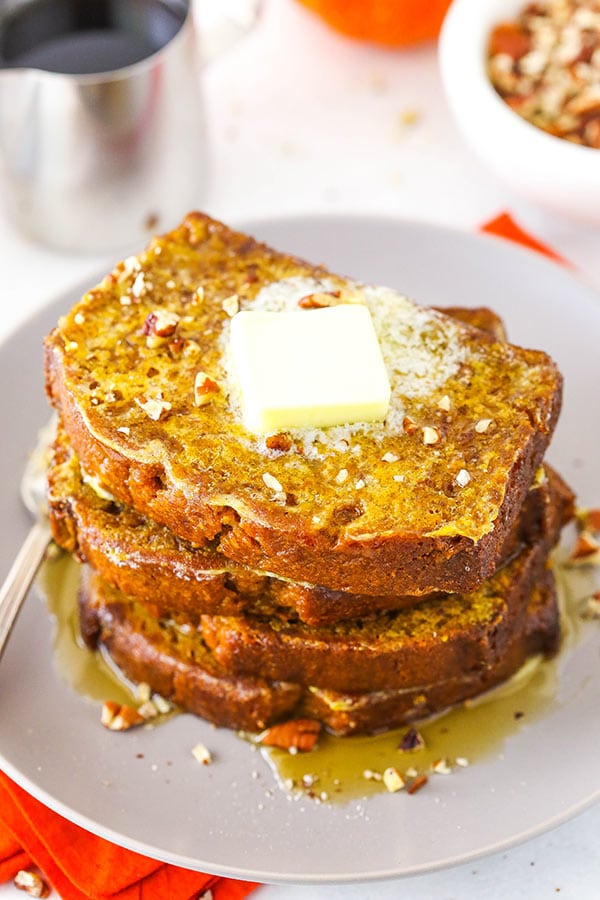 1. Make the pumpkin bread according to that recipe. The recipe makes two loaves, so you can cut it in half for one loaf or eat the other one. It freezes well too, if you’d like to save it for later. You can make the pumpkin bread several days before making the french toast, if you like.
2. When ready to make the french toast, add the eggs, milk, vanilla and ground cinnamon to a shallow dish and whisk together to combine. Set aside.
3. Heat a nonstick skillet over medium heat and melt about 1/2 a tablespoon of butter.
4. With one slice of pumpkin bread at a time, dip bread into mixture then flip and dip opposite side. You don’t need to let it soak – a quick dip and rub in the egg mixture should do it.
5. Immediately place the bread into the preheated skillet and cook until golden brown on both sides. I can usually get two or three slices in my skillet at one time.
6. Repeat with remaining pumpkin bread slices and egg mixture, adding additional butter before adding a new round of slices.
7. Serve warm. Top with butter, maple syrup or any toppings that you’d like.

NOTE: Make the pumpkin bread according to that recipe. The recipe makes two loaves, so you can cut it in half for one loaf or eat the other one. It freezes well too, if you’d like to save it for later. You can make the pumpkin bread several days before making the french toast, if you like. The french toast recipe only uses half of one loaf, but you can double the ingredients for the egg mixture to use the full loaf, if you’d like.