This cheesecake has been on my mind for a long time. I love cheesecake and Nutella, so it was inevitable that at some point they’d become one. And boy am I happy with how this one turned out! You are going to need to make this – soon!

To get started, you’ll made the crust. It’s an Oreo crust and the chocolate goes perfectly with the Nutella. You don’t need to remove the filling from the Oreos, just grind them into crumbs and combine them with some butter.

Bake the crust for about 8 minutes while you make the filling.

I had to play around with the filling just a bit to make sure I had the texture and flavor right. Nutella can sometimes get a little lost and that’s never a good thing since Nutella is amazing. To make sure that there’s plenty of Nutella, there’s a full two cups in the filling. If you are temped to reduce it, please don’t. I tried it with less and the flavor is just not as good. 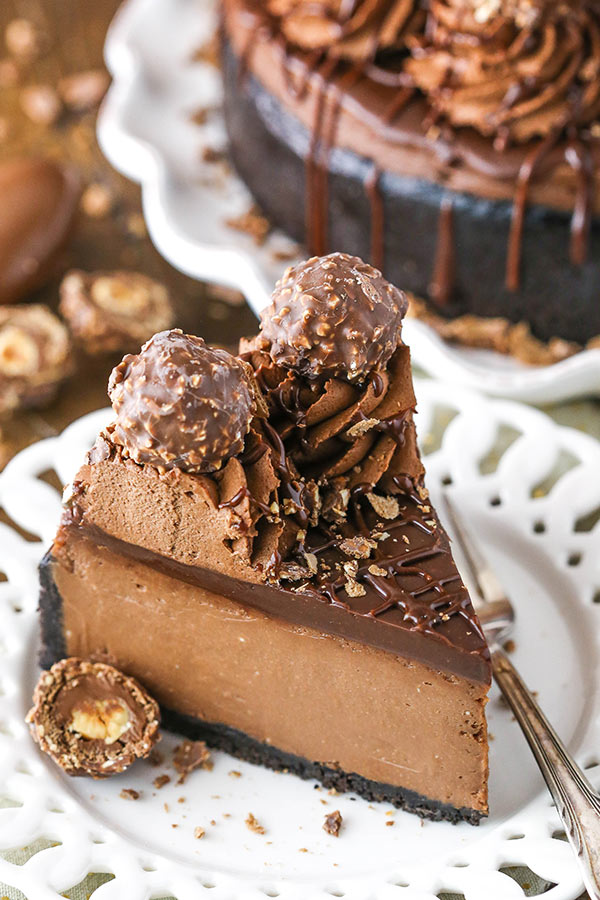 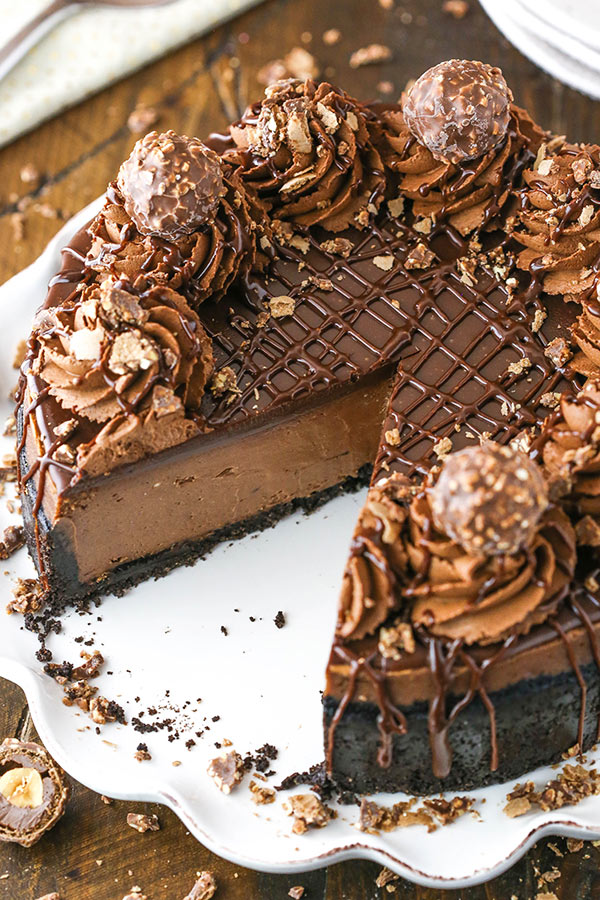 How to Make The Best Nutella Cheesecake

So you’ll combine three 8 ounce blocks of cream cheese with some sugar and flour, then add the Nutella and some vanilla extract. Be sure to mix things on low speed so that you don’t add too much air into the batter. The final addition is the eggs.

You might notice that the consistency of the filling is a a little thicker and almost sticky compared to a more normal cheesecake filling. This is totally ok. It’s from the large amount of Nutella.

Add the filling to the crust and bake in a water bath. I know water baths can be annoying, but they really only add a few more steps. And if you’re concerned about the water bath leaking, be sure to check out my post on how to prevent leaking. Water baths help the cheesecake bake more evenly, not crack or fall in the center, as well as keeps them from browning too much.

If the cheesecake looks a little funny on top as it bakes – a little bumpy and lighter in color – it’s ok. Keep going. 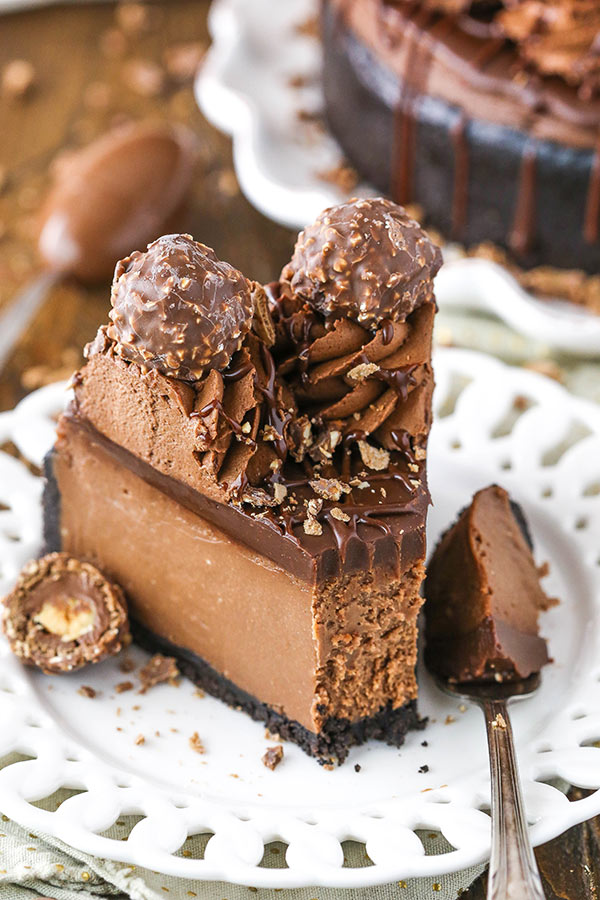 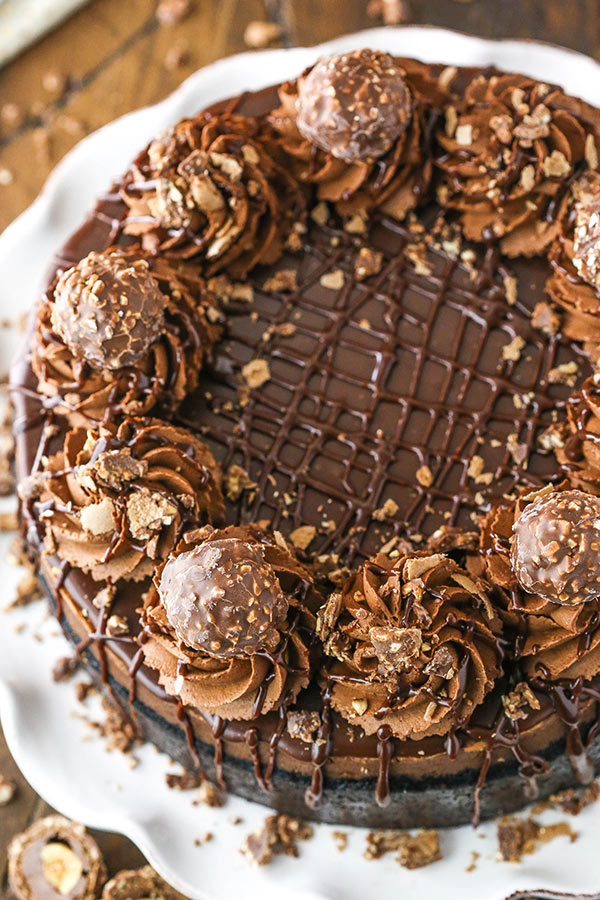 How to Cool Your Cheesecake

After baking, there’s a two step cooling process. Part one is the cheesecake remaining in the oven while the oven is off. It slowly begins to cool the cheesecake while continuing to cook it. The second part is still in the oven, but with the door cracked, further cooling the cheesecake slowly so that it doesn’t cool too quickly and crack.

The topping to this Nutella Cheesecake is the Nutella ganache. You can add the ganache prior to refrigerating the cheesecake or after. Either way is fine.

Make the Nutella ganache with another cup of Nutella (you’ll literally use a full 2.2 pound container of Nutella in this cheesecake), some chocolate chips and some heavy whipping cream. Pour about half of it on top of the cheesecake and use the rest to drizzle over the top when decorating it, or serve it with the cheesecake slices.

The finishing touches are some chocolate whipped cream and Ferrero Rocher candies.

You guys, this cheesecake is crazy awesome! All that Nutella gives it the most amazing, dense, creamy texture! I’m so totally in love with it and I know you’ll love it too! 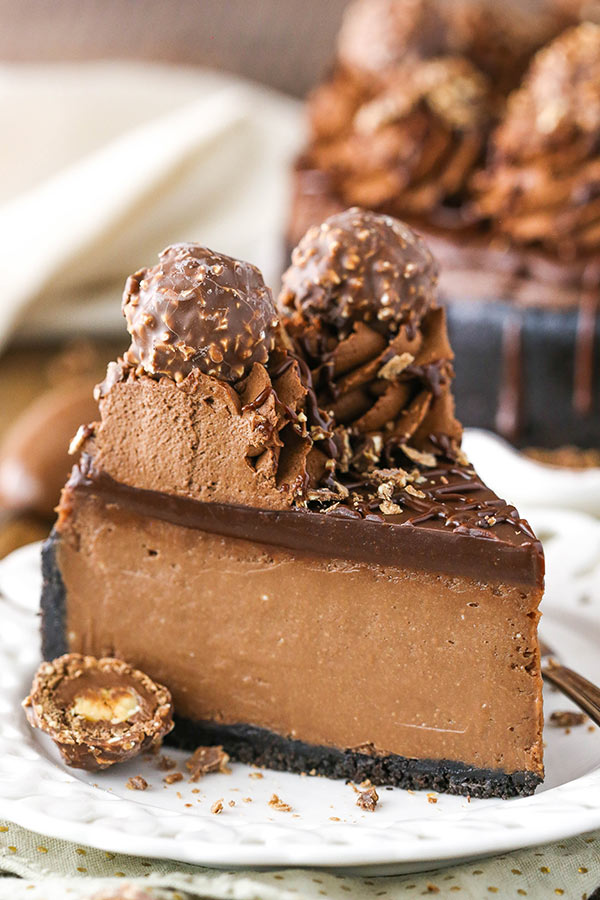 
Read transcript
For help with your cheesecake, check out my 10 tips for a perfect cheesecake. Print

1. Reduce oven temperature to 300°F (148°C).
2. In a large bowl, beat the cream cheese, sugar and flour on low speed until well completely combined and smooth. Be sure to use low speed to reduce the amount of air added to the batter, which can cause cracks. Scrape down the sides of the bowl.
3. Add the Nutella and vanilla extract and mix on low speed until well combined.
4. Add the eggs one at a time, mixing slowly to combine after each addition. Scrape down the sides of the bowl as needed to make sure everything is well combined. The batter will be thick and a little sticky.
5. Pour the cheesecake evenly batter into the crust.
6. Place the springform pan inside another larger pan. Fill the outside pan with enough warm water to go about halfway up the sides of the springform pan. The water should not go above the top edge of the aluminum foil on the springform pan.
7. Bake for 1 hour 30 minutes. The center should be set, but still jiggly.
8. Turn off the oven and leave the door closed for 30 minutes. The cheesecake will continue to cook, but slowly begin to cool as well.
9. Crack the door of the oven for 30 minutes to allow the cheesecake to continue to cool slowly. This process helps prevent cracking.
10. Remove the cheesecake from the oven and water bath wrapping and refrigerate until firm, 5-6 hours or overnight.
11. Remove the cheesecake from the springform pan and place on a serving dish.
12. To make the Nutella ganache, add the Nutella, chocolate chips and heavy whipping cream to a medium bowl. Heat in 15-20 second increments, stirring well between each, until the mixture is melted and smooth. Allow it to cool for 5-10 minutes
13. Pour about half of the ganache into the center of the cheesecake and lightly help it spread mostly to the edge of the cheesecake. It will continue to spread a little as it cools. Save the remaining ganache for later.
14. Refrigerate until the ganache is firm, then make the chocolate whipped cream.
15. Add the heavy whipping cream, cocoa powder, powdered sugar and vanilla extract to a large mixture bowl and whip on high speed until stiff peaks form.
16. Pipe the whipped cream around the outer edge of the cheesecake, then finish it off with a drizzle of some of the remaining ganache and Ferrero Rocher candies. If you have ganache remaining, serve it with the cheesecake slices.
17. Refrigerate the cheesecake until ready to serve. Cheesecake is best if eaten within 3-4 days.

If you’d like to add the Nutella ganache before refrigerating the cheesecake until firm, you can do that instead of waiting until it’s completely cool. Either way is fine.