These Coconut Macaroon Cupcakes are made with a moist coconut cupcake, a layer of chocolate ganache and a light coconut meringue frosting that’s covered with more toasted coconut! A fun cupcake inspired by the classic macaroon! 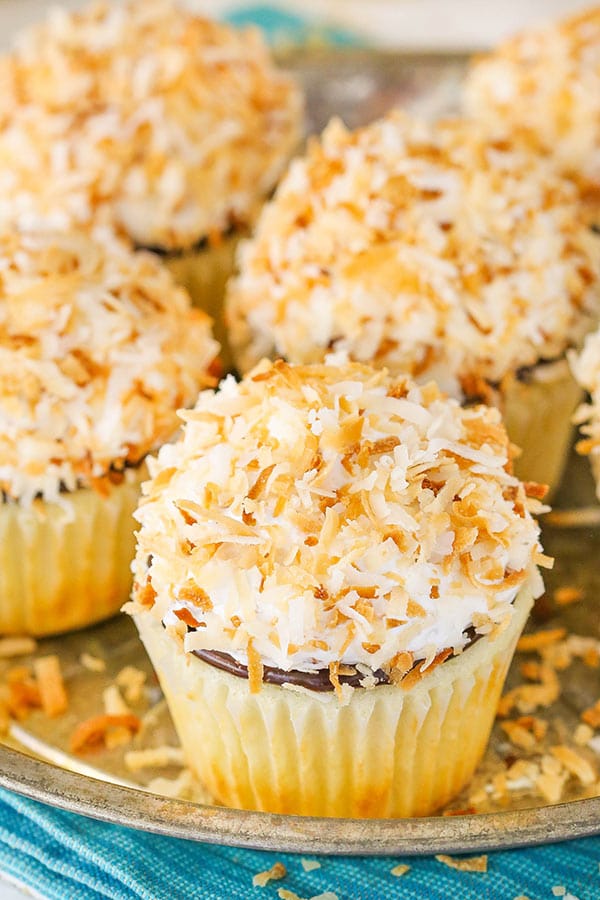 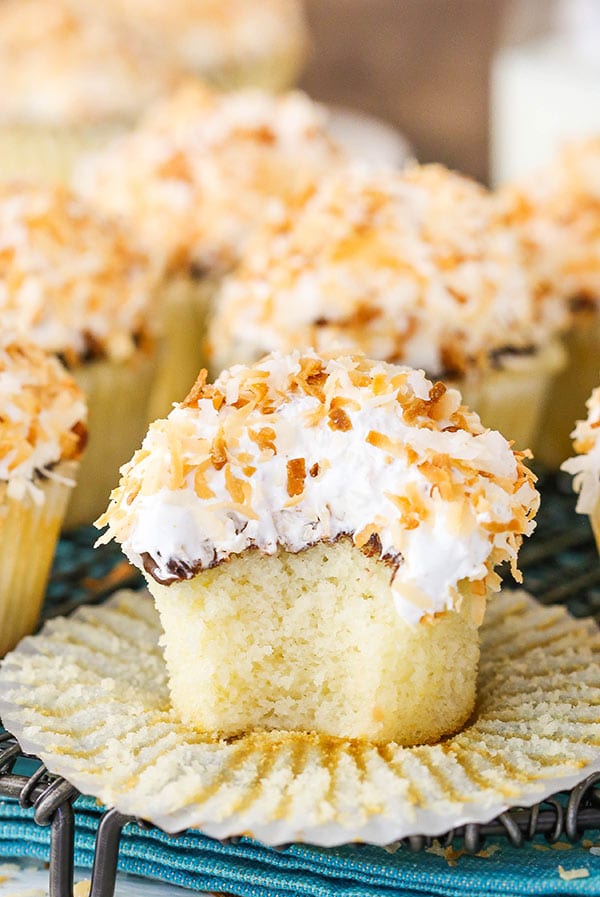 When these cupcakes popped into my head, I couldn’t wait to make them! A good macaroon is so tasty and I really wanted a cupcake that was just as yummy. Plus, with spring coming the coconut just seemed perfect!

So to start, we’ve got a moist coconut cupcake. They begin with the creaming of the butter and sugar – a very important step. You don’t want to skimp on the creaming time because it helps give you a cupcake with that light and fluffy texture.

Once the cupcakes are baked and ready to go, it’s time to make the frosting. The frosting was the hardest part for me to decide on. Macaroons are fairly light and I wanted to get that light feel in these cupcakes, so I ended up going with a meringue frosting that’s full of toasted coconut! While certainly not the exact texture of a macaroon, it’s full of coconut flavor, has a little crunch from the toasted coconut and is definitely reminiscent of the cookie. 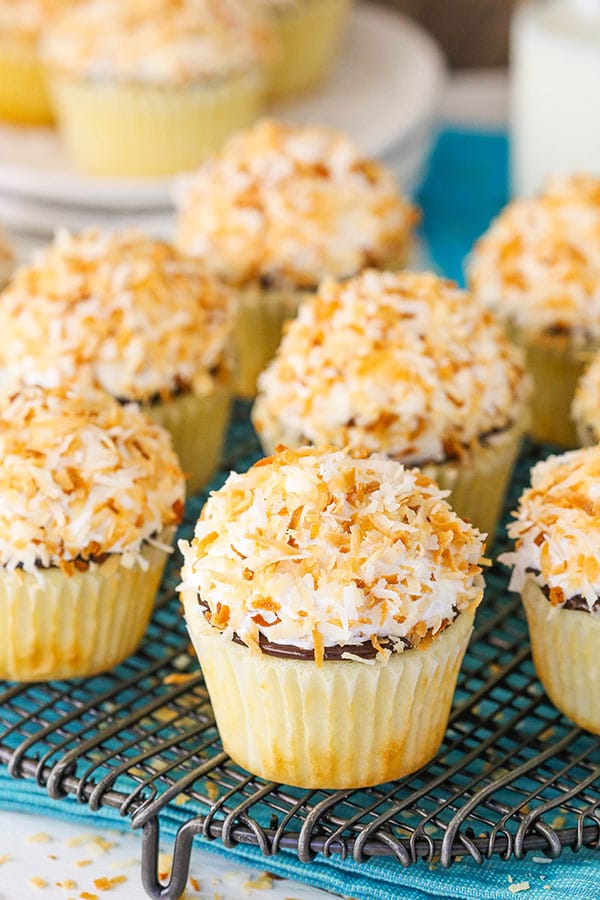 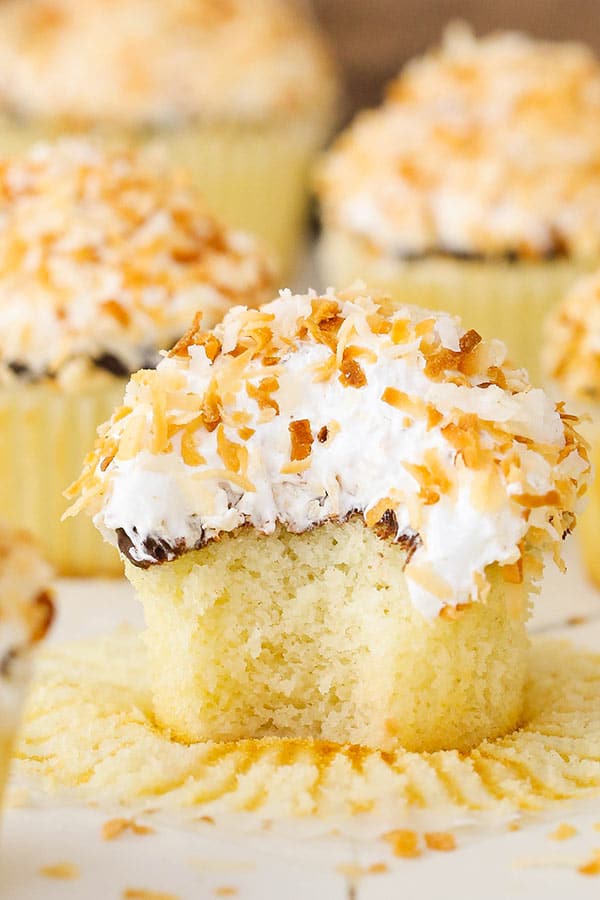 The meringue is really quite easy to make too. Sugar, cream of tarter, coconut extract and egg whites are combined in a double boiler – or a mixer bowl over a pot of simmering water, which I use – and cooked until the sugar is dissolved and the egg whites reach between 120 and 140 degrees. Pop the mixer bowl onto the mixer with the whisk attachment and whisk until stiff peaks form. Thats it! You’ve got meringue! Add the toasted coconut to it and your frosting is ready to go.

As another nod to the macaroon cookie, which I love when dipped into chocolate, I added a little layer of chocolate ganache to the top of each cupcake before adding the frosting. It looks a little like the coconut topping was dipped in chocolate and it adds a nice hint of chocolate to the cupcake.

To add the frosting to the cupcakes, I used my large round piping tip. The frosting is added in kind of a round mound. With the coconut in it, it’s hard to pipe it in any sort of smooth mound, but then I used my offset spatula to smooth it out and get that nice round shape. Next, a little more toasted coconut can be sprinkled around the frosting. It sticks nicely to the meringue and finishes off that nice macaroon look! For a little more help with how to make everything, be sure to check out the video just above the recipe.

These cupcakes were a hit! Several coconut lovers in the family couldn’t get enough of them! They are light, full of coconut and delicious! I hope you enjoy them! 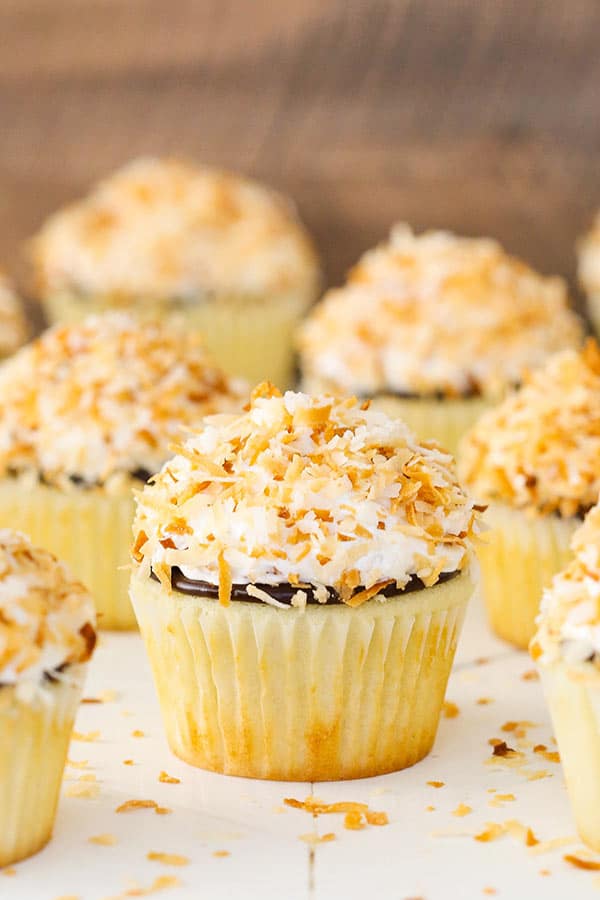 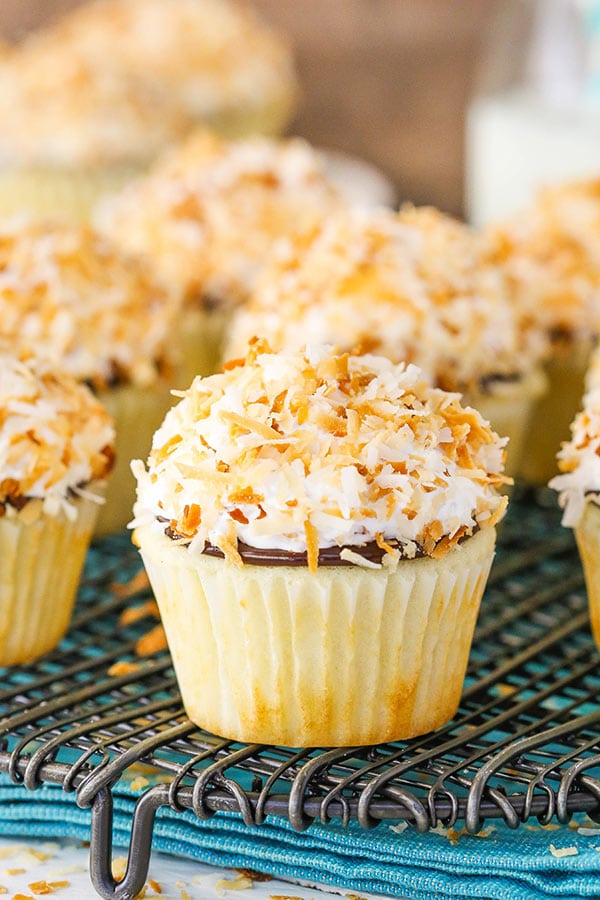 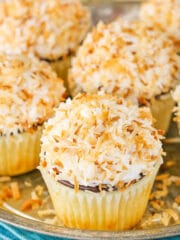 1. To toast the coconut, preheat the oven to 400°F (204°C).
2. Spread the coconut out over a cookie sheet lined with parchment paper. Toast it in the oven until lightly browned, tossing occasionally. It should take a total of about 7-10 minutes.
3. Remove the coconut from the oven and set aside to cool.
4. To make the cupcakes, turn the oven down to 350°F (176°C) and prepare a cupcake pan with cupcake liners.
5. Beat the butter and sugar until light in color and fluffy, about 3-4 minutes.
6. Add the sour cream and coconut extract and mix until well combined.
7. Add the egg whites in two batches, mixing until well combined.
8. Combine dry ingredients in another bowl, then combine milk and water in another bowl.
9. Add half of the dry ingredients to the batter and mix until well combined. Add the milk mixture and mix until well combined. Add remaining dry ingredients and mix until well combined.
10. Fill cupcake liners about halfway. Bake for 15-17 minutes, or until a toothpick inserted comes out with a few crumbs.
11. Remove cupcakes from oven and allow to cool for 2-3 minutes, then remove to cooling rack to finish cooling.
12. While cupcakes cool, make the frosting. To make the meringue, combine the sugar, cream of tartar, coconut extract and egg whites in a large mixer bowl. Place the bowl over a saucepan or pot of simmering water. You can also use a double boiler.
14. Whisk constantly until sugar is dissolved and whites are warm, to between 120 and 140 degrees on a thermometer, about 4-6 minutes. Remove from heat.
15. Using the whisk attachment, beat the egg white mixture on low speed, gradually increasing to high, until stiff, glossy peaks form, 5 to 7 minutes.
16. Fold 3 cups of the toasted coconut into the meringue. Set aside.
17. Put the chocolate chips for the ganache in a medium heat proof bowl.
18. Heat the heavy whipping cream until it begins to boil, then pour it over the chocolate chips.
19. Allow the chocolate and cream to sit for 3-5 minutes, then whisk until smooth.
20. Spread a small amount of chocolate ganache over the tops of each cupcake.
21. Pipe the frosting onto the top of the cupcakes in a mound. I used Ateco tip 808. You can use an offset spatula to help shape the frosting into a mound, if needed.
22. Use the remaining cup of coconut to sprinkle over and around the frosting.
23. Refrigerate cupcakes until ready to serve. Serve at room temperature. Cupcakes are best for 2-3 days. 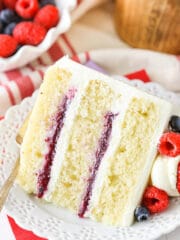