These Funfetti Cake Batter Blondies with Rainbow Chip Icing taste just like a funfetti cake, but with more of the blondie texture. And with the white chocolate mixed in and the rainbow chip icing on top, this easy dessert is perfect!

If you love blondies as much as I do, you should also try my Cinnamon Roll Blondies! 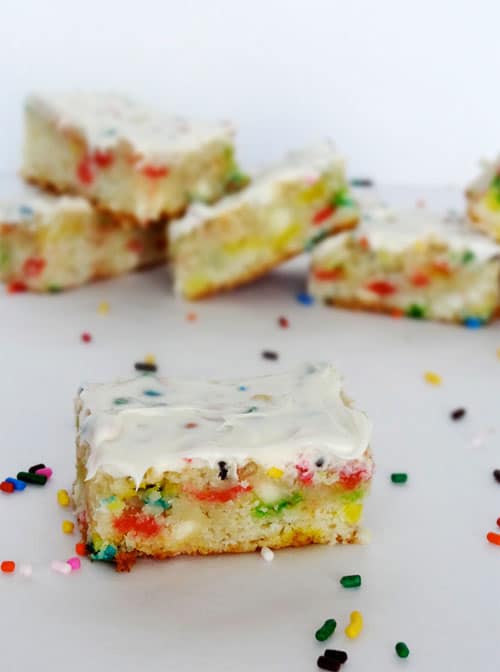 I actually think I’ll recommend to my mom that these become her replacement for her regular brownies that she makes for tailgating for Panther’s games. These are clearly much more celebratory than a plain chocolate brownie. Especially for really exciting match ups! Like tonight!

The Carolina Panthers and the New York Giants! I can’t wait! As long as the Panther’s are on their game this should be an awesome one to watch. The hubs and I will be decked out in our gear. Even our black lab, Jessie, will have her Panthers bandana on. It’s a family affair.

The only bummer about living in Atlanta is that we are 4 hours away from being able to go to a Panthers game on a Thursday night. My parents will be there. Tailgating like we’ve done since I was 9. 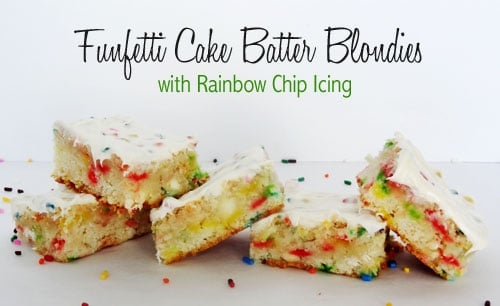 The hubs and I almost went home last weekend to go see the Panthers play the Saints and ended up not going. Boy was that a mistake!! My family ended up meeting the Panthers new team President Danny Morrison while tailgating and he gave them 6 FIELD PASSES!! Yes, they got on the field with the team for hours prior to the game. They were even on the field while the players were announced and running out of the tunnel!

They had to leave before kickoff, but got led out passed the locker rooms, cheerleader dressing rooms, press room and all the other cool rooms that most people don’t get to see.

When I woke the hubs up to tell him what they were doing, he was so excited for them. I was like, hello! Don’t be happy for them! Be mad for us! We should be there!!

Just kidding 🙂 I was happy for them. But also totally bummed. 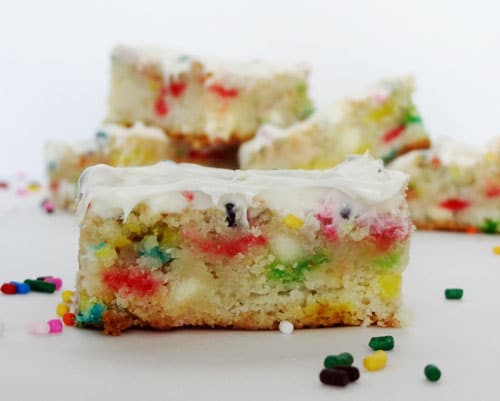 These Funfetti Cake Batter Blondies with Rainbow Chip Icing taste just like a funfetti cake, but with more of the blondie texture. And with the white chocolate mixed in and the rainbow chip icing on top, this easy dessert is perfect!

1. Preheat oven to 350 degrees.
2. Combine cake mix with oil and egg.
3. Add milk slowly until the batter is just combined. You want it to be as dense as possible.
4. Stir in white chocolate chips.
5. Pour into a greased 8 x 8 pan.
6. Bake for 25-30 minutes or until the edges are golden.
7. Let cool, then top with rainbow chip icing.