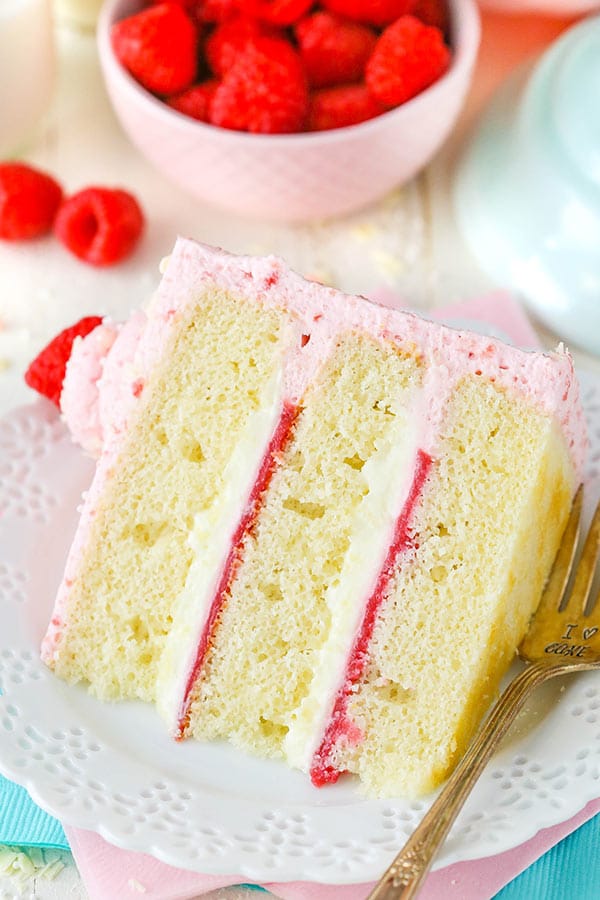 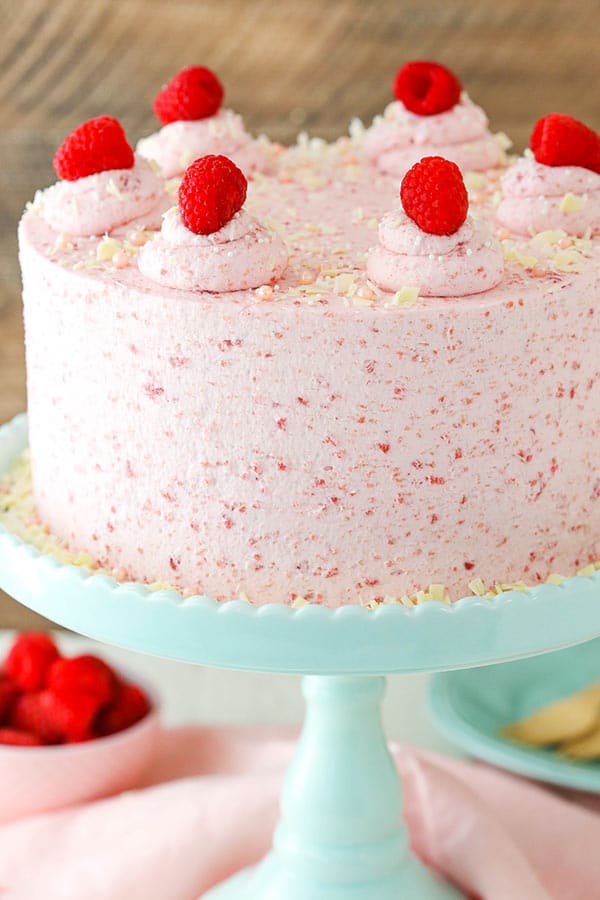 This post is sponsored by ALDI, but all opinions are my own.

You guys, this cake has been on my list to make for so long. Like maybe going on two years or something. It’s a flavor combination that I’ve long loved in just about any form, and I desperately wanted to make it into a tasty layer cake full of light and lovely mousse.

The problem was that I just couldn’t decide how I wanted to go about it. Raspberry is such a strong flavor and white chocolate can be so light once you mix it into something. I kept hesitating about the best way to incorporate them both so that you could clearly taste and enjoy them.

Well I finally pushed through when I saw the beautiful raspberries they have at ALDI right now! They are so tasty and reasonably priced – I knew it was time to make this cake. You’ll need about three of the 6-ounce containers, but feel free to stock up on a couple more. If you’re like me, you’ll snack on them while baking.

How to Make This Gorgeous Cake

So, to start, you’ve got the vanilla cake. It’s moist, light and one of my favorites. The sour cream adds a lovely taste and moisture that keeps it nice for several days. Just be sure not to skimp on the creaming time for the sugar and butter. It adds air to the batter that gives it that lovely rise, so it’s nice and fluffy! 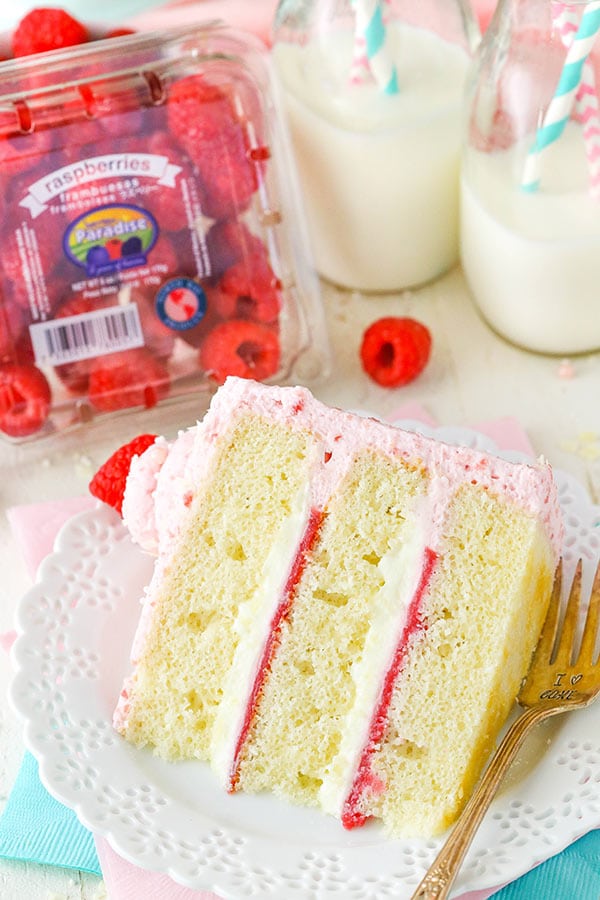 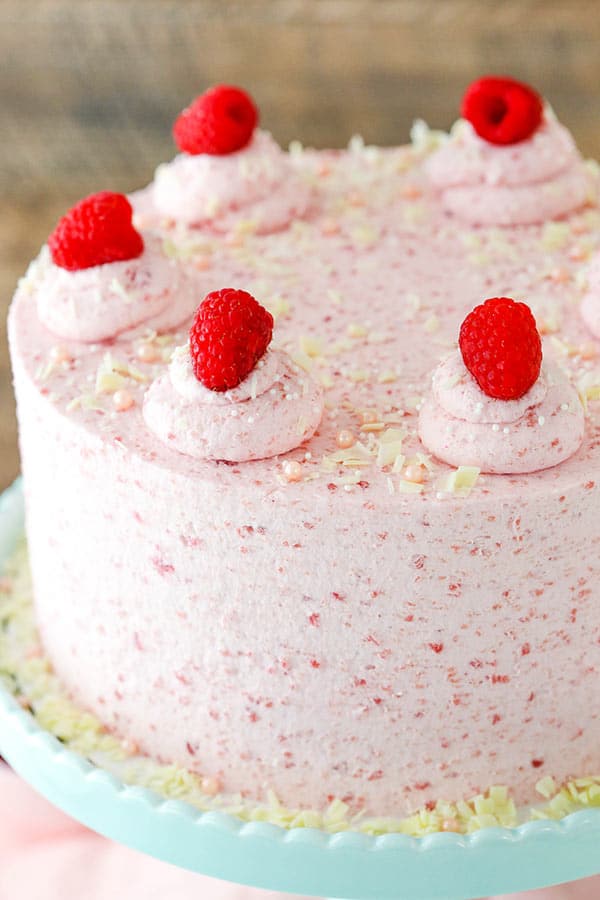 And then there’s the raspberries. Puree those babies down for both the filling and mousse that will frost the cake. The filling is made over the stove and it’s super quick. Just combine some of the puree, sugar and cornstarch, and let it come to a boil. It’s not a huge amount of filling, so it heats up pretty quickly. Just boil it for one minute and you’re done.

For the frosting, you’ll take the remaining raspberry puree and sprinkle some gelatin over it. After trying a couple methods, I found using gelatin to be the most effective way to ensure that this light, whipped raspberry mousse stays firm and easy to work with as a frosting. 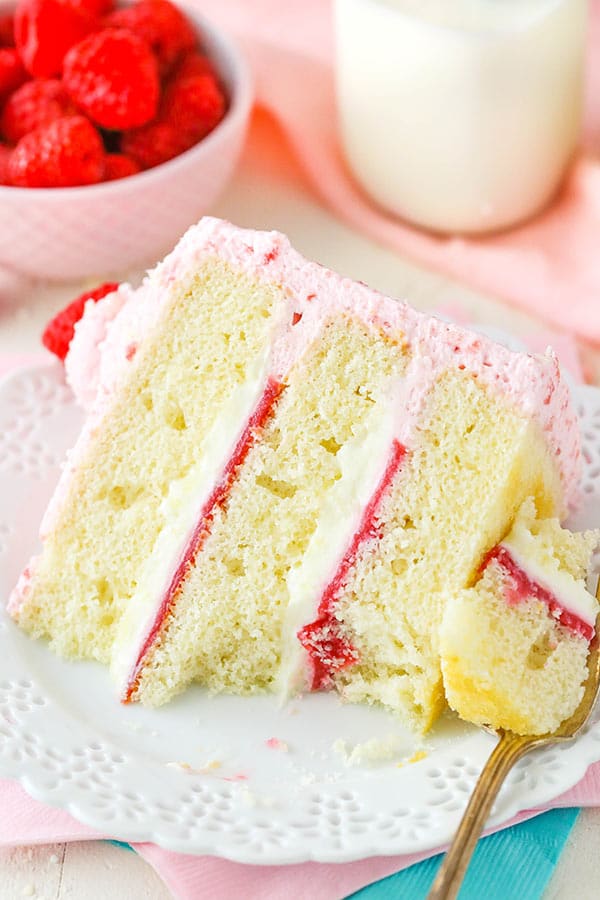 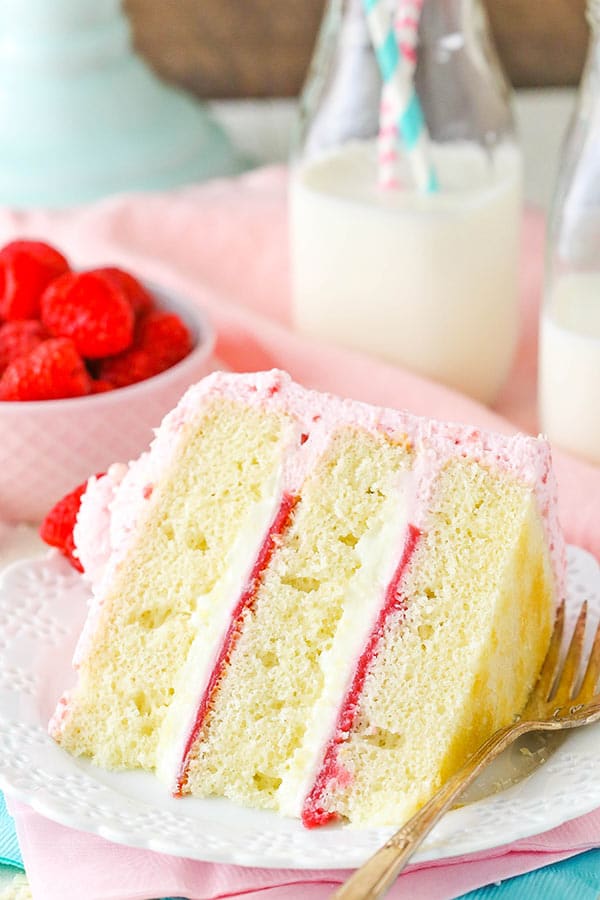 And if you haven’t worked with gelatin before, don’t fear! You’ll want to sprinkle the powdered gelatin over the raspberry puree, which should be room temperature or cooler. The cooler temperature of the liquid puree allows the gelatin to bloom. Let that sit for several minutes, then heat it all up to melt down the gelatin and smooth out the raspberry mixture. You then want it to cool back down to at least room temperature before adding to the whipped cream.

And there you have it! Once everything is made, build your cake and refrigerate it until you’re ready to show it off!

Seriously, this cake is the jam! Why did it take me so long to make it? Thank goodness those raspberries at ALDI finally got me motivated! The moist vanilla cake with just enough pop from the raspberry filling and the smooth, light white chocolate mousse is amazing. Then, top if off with a light whipped raspberry mousse, and I can’t even handle it! I want to keep every little crumb to myself. 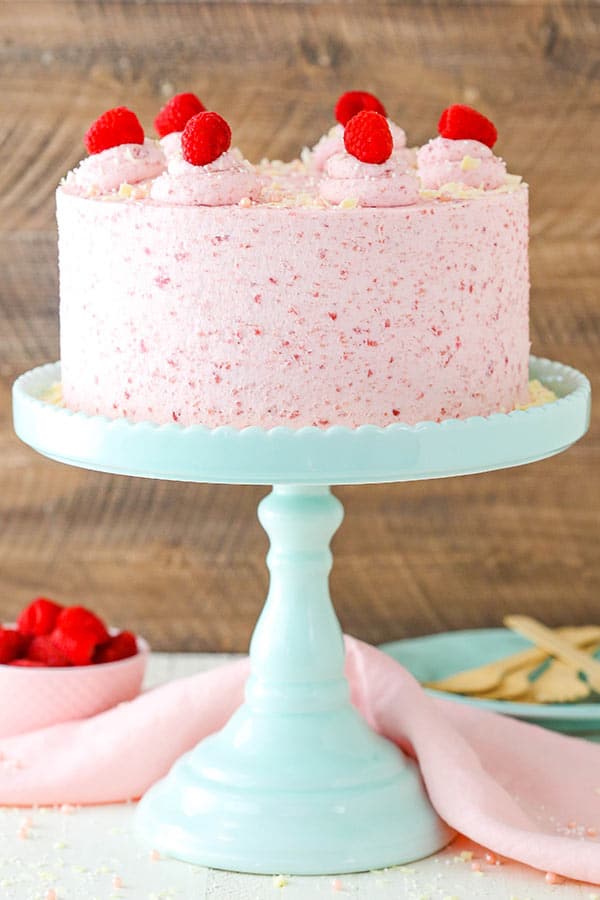 * About three 6-ounce containers of raspberries

TO MAKE THE WHITE CHOCOLATE MOUSSE:

9. Heat 1/4 cup (60ml) heavy cream until it just starts to boil, then pour over the white chocolate chips. Cover with clear wrap for 3-4 minutes, then whisk until smooth. Sometimes the white chocolate doesn’t completely melt. If that happens, microwave white chocolate mixture in 10 second increments, stirring well between each increment, until smooth. Set aside to cool to about room temperature.
10. Whip remaining 3/4 cup (180ml) of heavy whipping cream and powdered sugar in a large mixer bowl fitted with the whisk attachment until stiff peaks form.
11. Carefully fold about 1/3 of the whipped cream into the cooled white chocolate mixture until combined.
12. Fold in the remaining whipped cream until well combined. Set the mousse in the refrigerator until ready to use.

TO MAKE THE RASPBERRY MOUSSE AND FILLING:

13. Puree raspberries with a food processor, then strain through a fine mesh sieve to discard seeds. You should end up with about 1 1/4 cups of puree.
14. To make the raspberry filling, add half a cup of the raspberry puree to a small saucepan, along with the cornstarch and sugar. Heat slowly over medium heat until the mixture begins to thicken and boil. Boil for one minute, then remove from heat to cool. Set aside.
15. To make the raspberry mousse, add remaining 3/4 cup of raspberry puree to a large dish, so that the puree makes a thin layer.
16. Sprinkle the powdered gelatin evenly over the puree and let stand for 4-5 minutes.
17. Heat the puree and gelatin in the microwave in 10-second intervals until warm and smooth. Set the mixture aside to cool to room temperature or in the fridge. Note that the colder the mixture gets, the firmer it will be. If you want a more cohesive pink color frosting, you won’t want it to firm up too much before adding to the whipped cream in the next steps, but it should be at least room temperature. The firmer the mixture gets, the chunkier your raspberry mixture will be.
18. Whip the heavy whipping cream and powdered sugar in a large mixer bowl fitted with the whisk attachment until stiff peaks form.
19. Add the cooled raspberry gelatin mixture to the whipped cream and gently whip until well combined. Refrigerate until ready to use. If your raspberry mixture was still a little thin when you added it, the whipped cream may be a bit thin. It should firm up in the fridge.