These S’mores Skillet Brownies have a glorious graham cracker crust and a chewy brownie layer topped with marshmallows and melty milk chocolate! S’mores have never tasted so delicious!

For another spectacular smores dessert, try my S’mores Cupcakes! 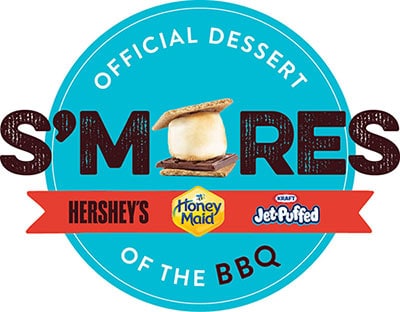 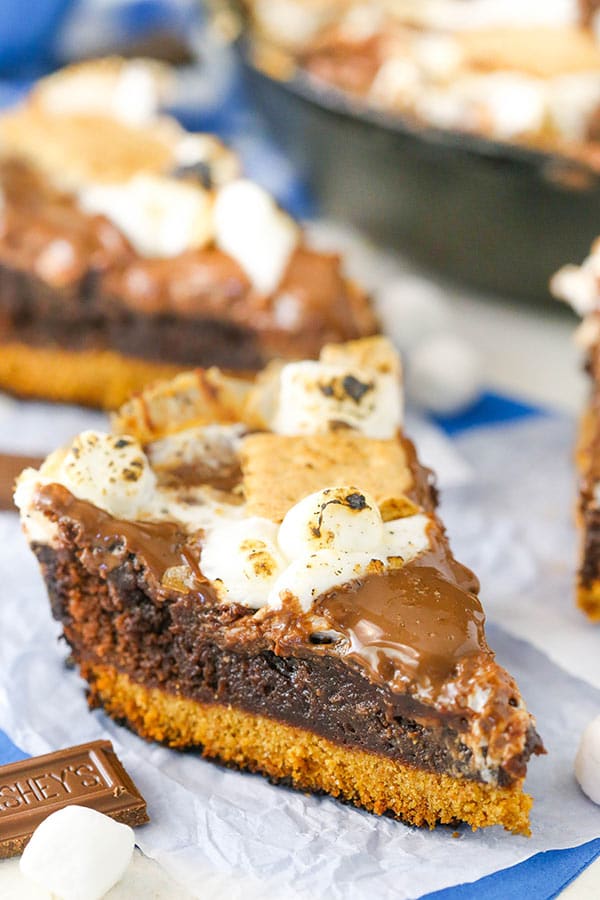 I can’t think of a better treat to make to celebrate National S’mores Day on Thursday, August 10th!

This post is sponsored by HONEY MAID Grahams, HERSHEY’S Milk Chocolate and JET-PUFFED Marshmallows, but all opinions are my own.

So National S’mores Day is August 10th and of course we have to celebrate it! S’mores are one of the most iconic treats and something I personally love. In fact, they have been named the “Official Dessert of the BBQ!” The gooey melted marshmallows, the melted chocolate and the graham crackers – totally delicious and nostalgic! I can remember camping with some of my girlfriends in college a few summers in a row and always making sure we had everything for S’mores. They are clearly some of the most important things to bring with you.

Of course, even if you aren’t going camping it’s easy to recreate the S’mores experience using the grill. And since S’mores shouldn’t be enjoyed alone, a backyard BBQ is totally necessary. After eating the main meal, you can get down to what people really want – dessert!

The fun thing about these brownies is they are made right on the grill and don’t take too long to make. In fact, you could mix everything together and let it sit on the grill while you eat. Once the burgers come off, dessert can go on. 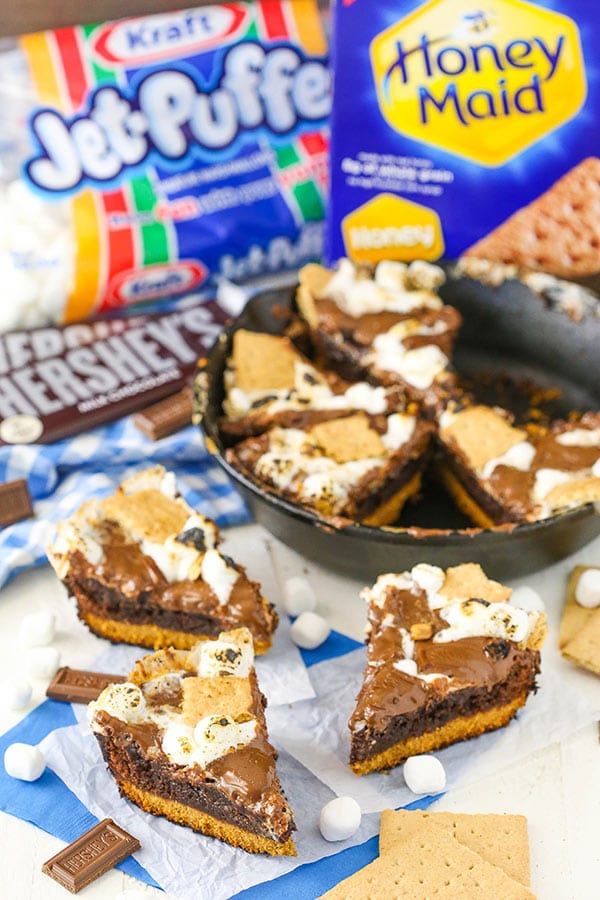 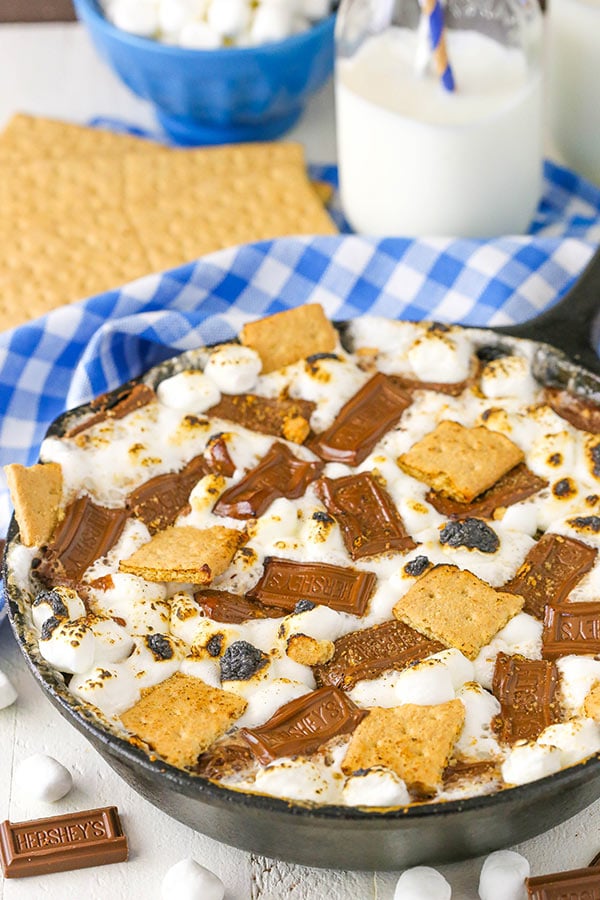 How to Make The Best Smores Dessert

To make the brownie, you’ll start with the crust. Some graham cracker crumbs and a little sugar are combined with some melted butter. A classic crust for a classic dessert celebration! You can leave it as is, or prebake it a bit. I find that if I prebake it for about 10 minutes, it’s less crumbly when I cut the brownies up later.

The brownie batter itself is super easy to make. No need for a mixer or anything, just a whisk. Combine the dry ingredients, then the wet ingredients and then combine them together.

While you’re making the brownie batter, you’ll want to go ahead and preheat your grill for “baking”. If you have a way to set it directly to 350 degrees, you can go ahead and do that. Otherwise, turn on the grill and try to get a gauge for about where you need to be. Mine was a little less then half-way to “full power”. You can check it a couple times to make sure it’s at the right temperature and then adjust as needed. 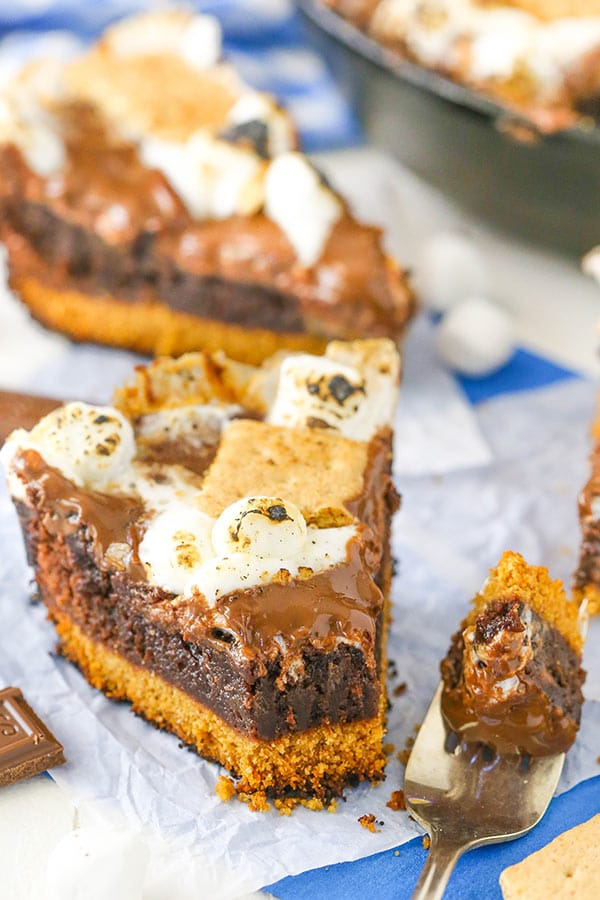 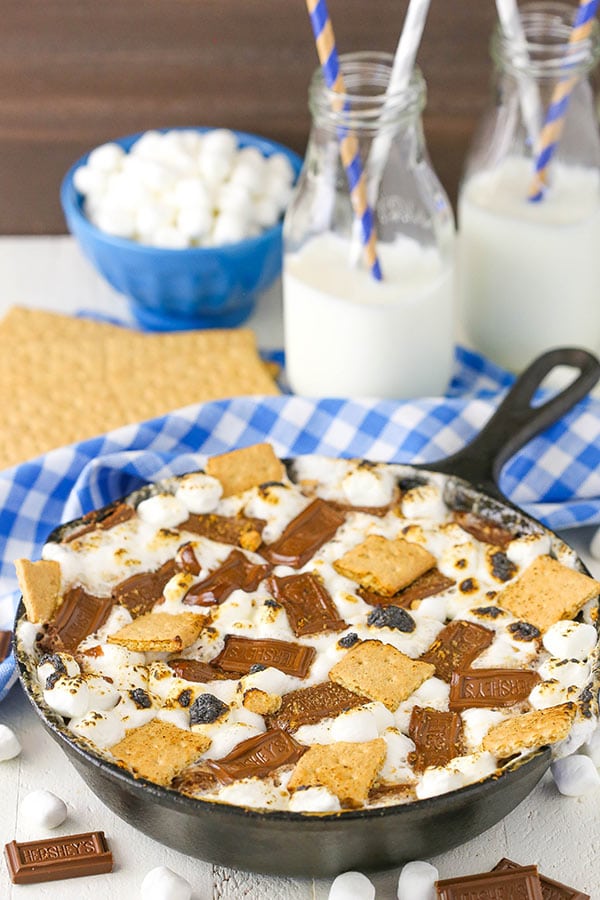 When your brownie and grill are ready, pop it on there to bake for about 18 to 20 minutes. You want it to be mostly cooked through. Then you’ll add the marshmallows, chocolate and graham crackers on top. Close the grill again to cook for several more minutes, until the brownie is cooked through and the toppings are melted.

Once it’s done, let it cool for about 15 minutes, then slice and serve. Such a fun and easy way to enjoy the classic S’more for National S’mores Day without having to leave your backyard. Let’s get our S’mores on! 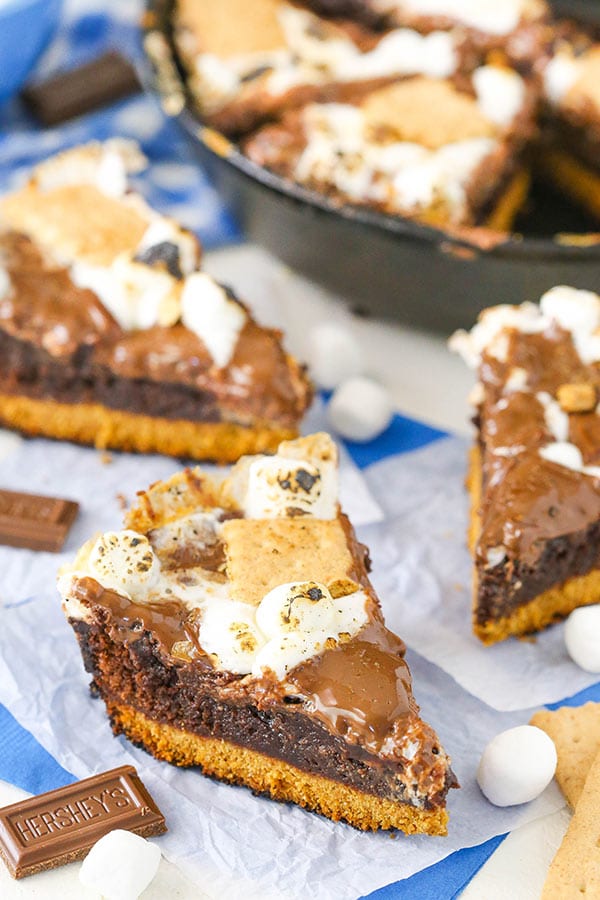 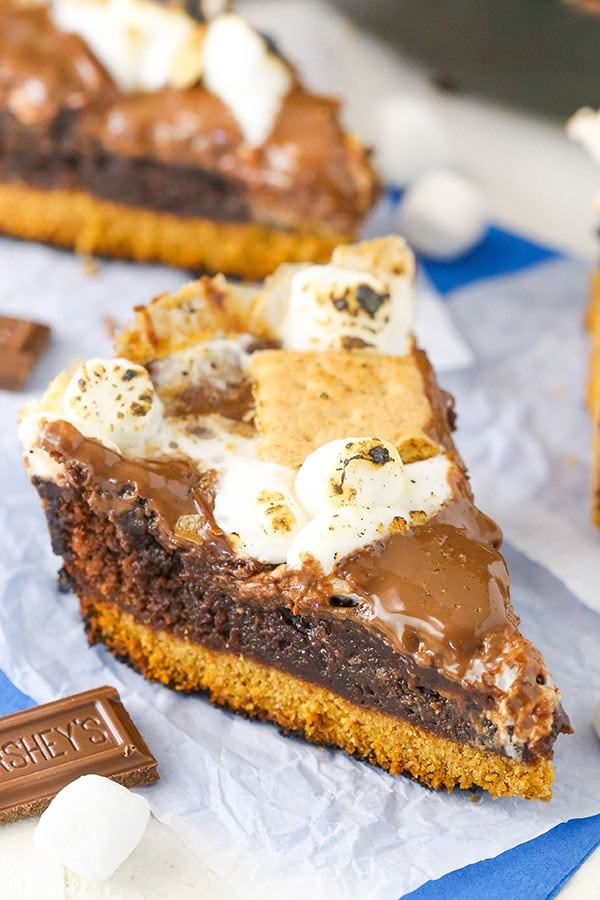 These S’mores Skillet Brownies have a glorious graham cracker crust and a chewy brownie layer topped with marshmallows and melty milk chocolate! S’mores have never tasted so delicious!

1. Preheat the grill to 350°F (176°C). Grease an 8-inch cast iron skillet.
2. Combine the HONEY MAID Grahams Cracker crumbs and sugar, then add the melted butter. Stir until well combined.
3. Pour the crust ingredients into the bottom of the skillet and press into an even layer.
4. In a medium-sized bowl, combine the vegetable oil, sugar and vanilla extract.
5. Add the egg and egg white to the oil mixture and whisk together until well combined. Set aside.
6. In another small bowl, combine the flour, cocoa, baking powder and salt.
7. Add the dry ingredients to the egg mixture and mix together until well combined.
8. Pour the batter into the skillet and spread evenly.
9. Cook the brownie on the grill for 18-20 minutes, until mostly cooked through.
10. Add the JET-PUFFED Marshmallow, HERSHEY’S Milk Chocolate and HONEY MAID Grahams Cracker toppings, then allow to cook for 2-3 more minutes, or until the brownie is cooked through and the marshmallows and chocolate are melted.
11.Remove the brownie from the grill and allow to cool for about 15 minutes, then slice and serve.

I used a gas grill for grilling this brownie, which will allow for better temperature control.

If you’d like to, you can prebake the crust for about 10 minutes. It’ll be a little less crumbly when you slice the brownies later.

If you’d prefer to bake in the oven, use an 8 inch cake pan and follow the rest of the directions.