These Moscow Mule Cupcakes are so fun – just like the cocktail! A moist ginger cupcake is topped with a ginger-lime frosting and I love them so much! 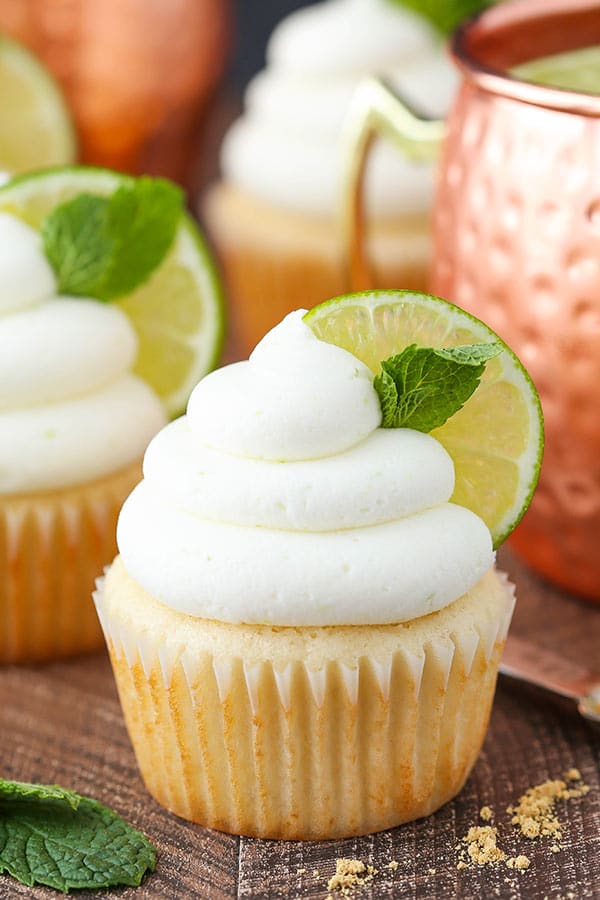 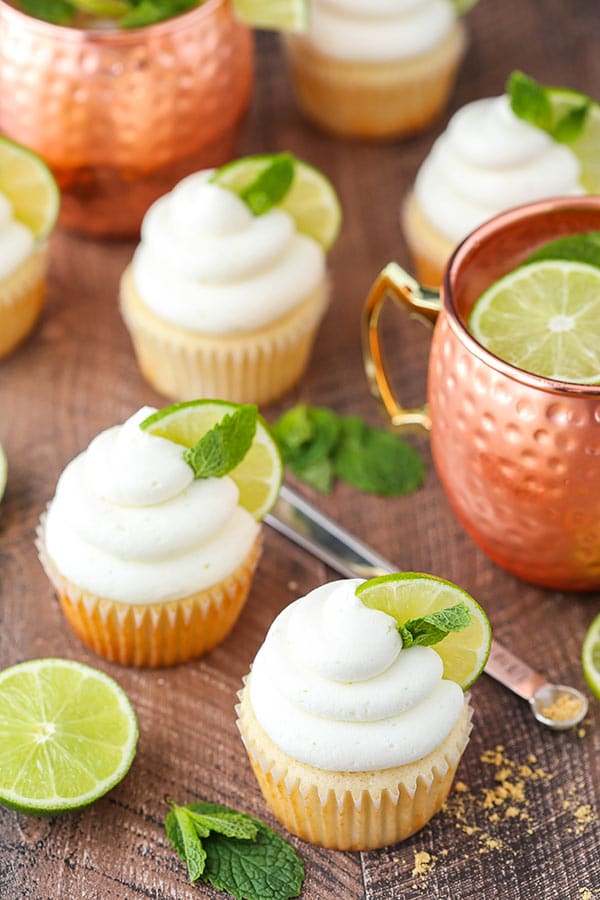 So lately I have become obsessed with Moscow Mules. I never ever thought I’d be into them because of the ginger beer. First of all, I don’t like beer. Like, at all. Unless it’s in cheese (like this Bacon Cheddar Beer Cheese Dip). In a drink? Not so much. Also – ginger. I mean I like it, but it seemed like a lot to drink it.

I was SO WRONG! “Beer” is kind of a horrible name for ginger beer. It’s totally not beer. It’s not even alcoholic. And it’s SO GOOD! Sorry for all the caps, but I’m seriously in love. I have tasted both brands of ginger beer that are easily available at our store and I’m all about the most ginger-y ginger beer I can find. The one with the biggest ginger bite is my jam – Fever Tree.

I’m also more of a rum or tequila girl than vodka, but it doesn’t bother me at all in the Moscow Mules. They are seriously my new go-to drink. The hubs is shocked that I’m so into them and that I’ve changed my drink of choice – and it’s not super sweet. Normally I order just about the sweetest drink I can find. 🙂 No more! So naturally I had to turn it into a sweet treat. 🙂 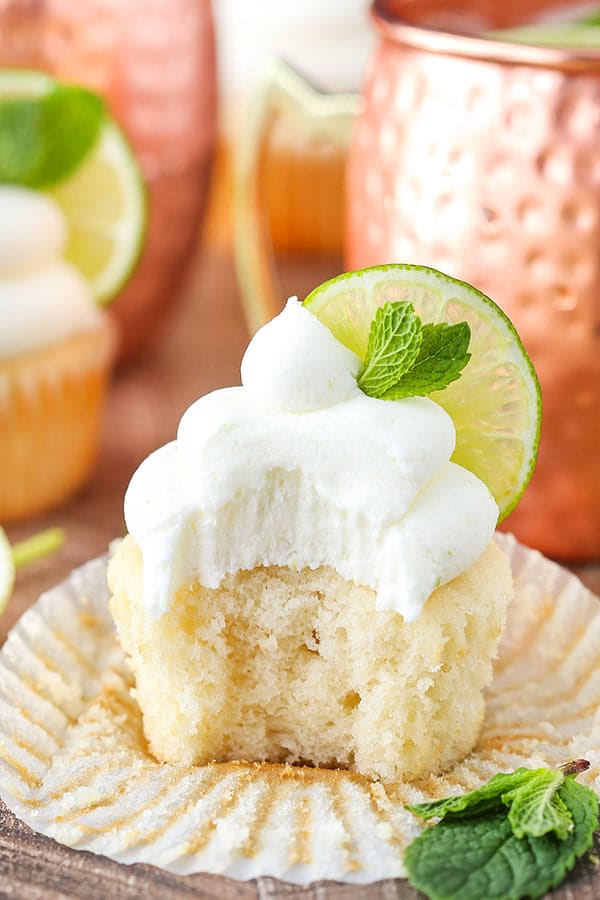 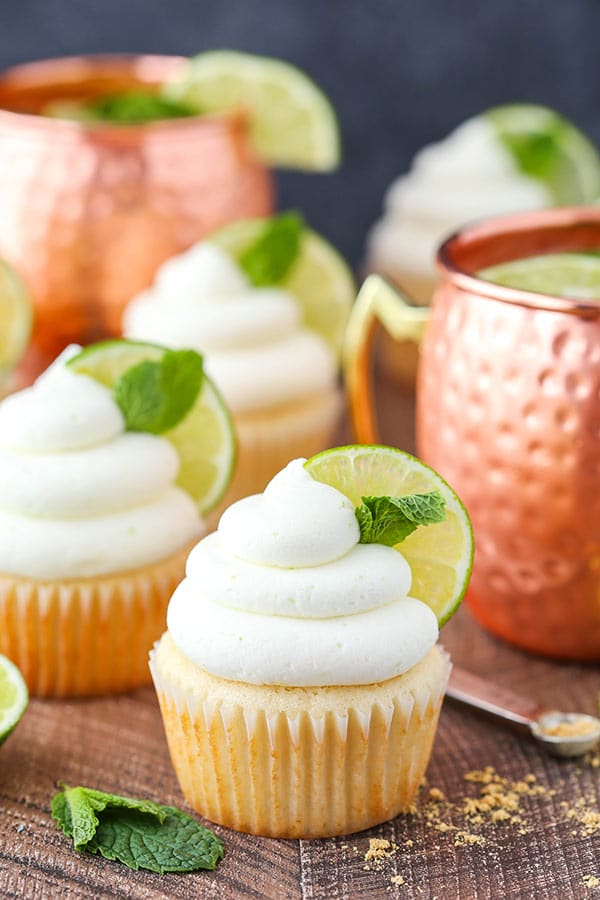 I went through so many versions of these cupcakes. I don’t even remember how many, but it was a lot. Then I was totally sure I had it and was done and then frosting ended up being too lime-y and I had to go another round. Now these babies are just right!

A big challenge was getting enough ginger flavor in the cupcake. As I said, I dig the ginger flavor of a moscow mule so it needed to not get lost. Ginger beer alone seemed to do a decent job at first, but once I added frosting I decided to up the ante and add some more ginger to the cupcake. I didn’t want it to get lost and it was a good call.

I tested several ginger beers with the cupcakes and they all baked fine. As I said, I think the most ginger-y beer is the best, but if you have a fave, you can go with it. I even tried diet and it was fine.

I added a touch of vodka to the cupcake because that felt authentic to a cocktail cupcake. 🙂 However if you wanted to have a non-alcoholic cupcake, you can totally swap it out for water. You don’t really taste the vodka, so it’s cool either way.

The frosting is also focused on the ginger. It may seem like ginger overload but it really isn’t. Moscow mules are all about the ginger. In an earlier version, I added lime juice and lime zest to the frosting. The lime ended up taking over the entire cupcake and the ginger got lost. The final version of the frosting has a bit more ginger and only uses lime zest. It give just enough lime flavor without being overpowering.

If you couldn’t already tell, I love these cupcakes! The are super moist, so tasty and SO fun! If you’re looking for a fun way to incorporate a great cocktail into a cupcake, this is it! 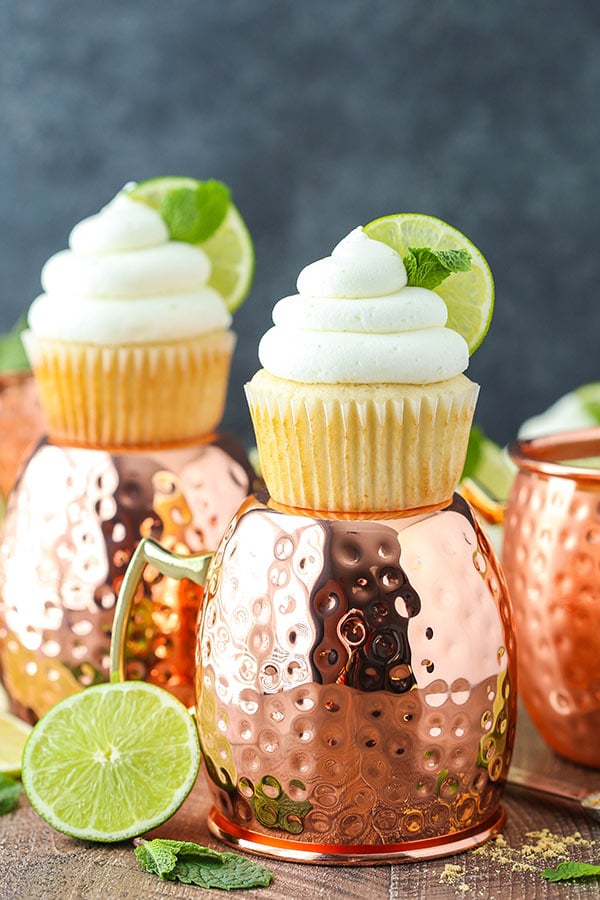 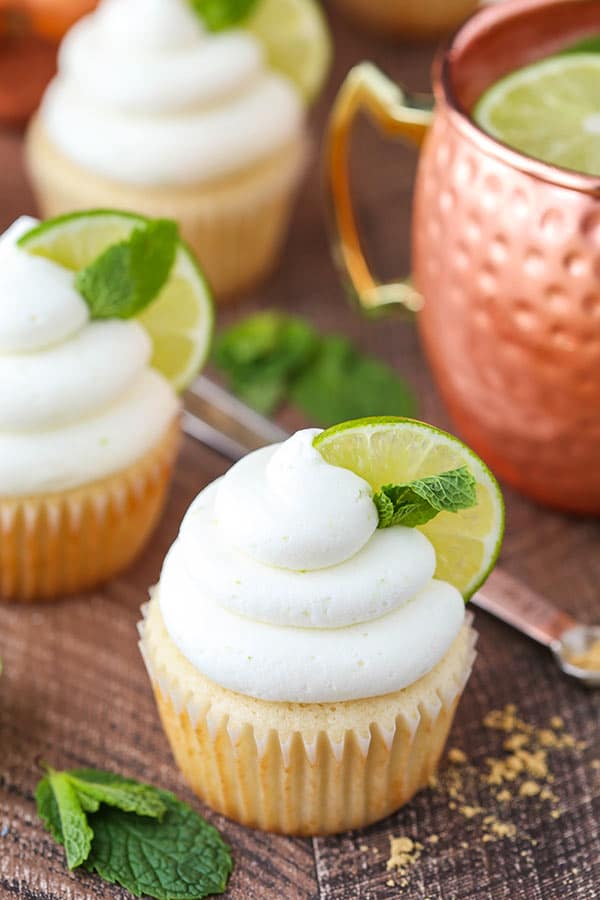 These Moscow Mule Cupcakes are so fun – just like the cocktail! A moist ginger cupcake is topped with a ginger-lime frosting and I love them so much!

I use more frosting with the round tip swirl than you may need if you use a different frosting tip. You could cut down on the amount of frosting if you are piping the frosting differently.

The vodka can be substituted with water if you’d like a non-alcoholic cupcake. 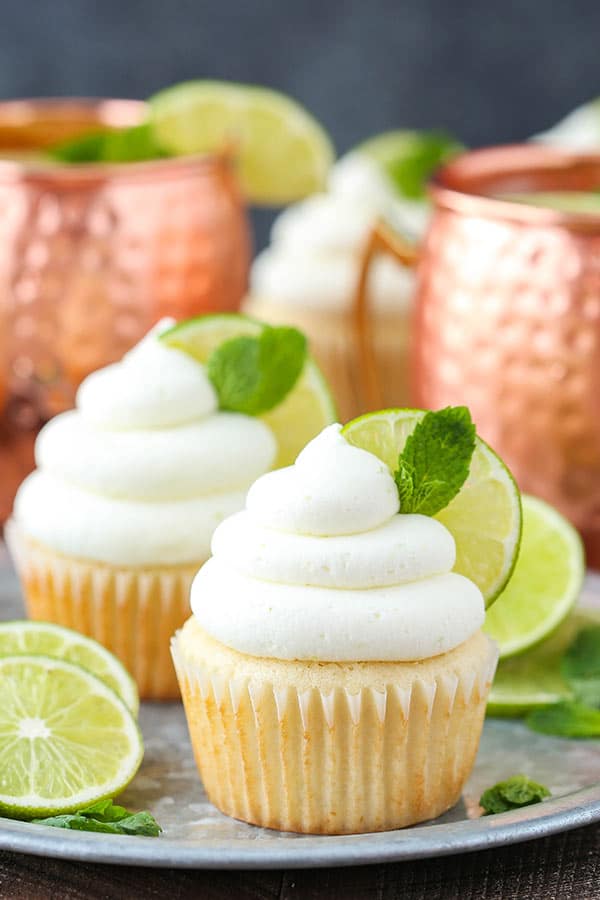