It’s finally time for me to introduce the new little members of our family! Check out my precious twins’ Baby Photos and get to know their personalities. 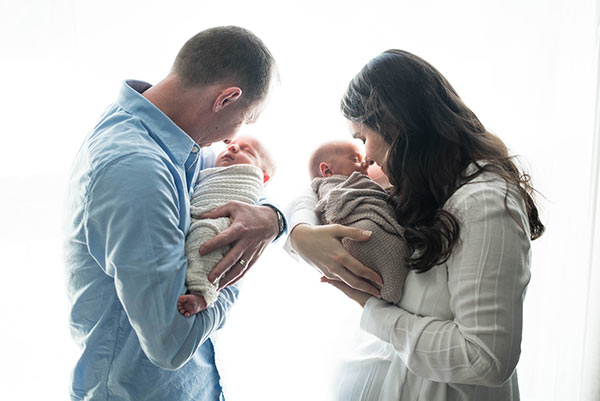 I’m so excited to finally share some photos of the twins with you! If you follow me on Instagram you may have already seen several, but we finally have our newborn photos back and we love them!

So allow me to officially introduce our identical twin boys, Ashton and Brooks. We are smitten! They were born Friday, February 2 via emergency C-section, about a week before the scheduled C-section. Ashton was born at 5:23pm weighing 4 lbs 10 oz and Brooks was born at 5:24pm weighing 6 lbs 5 oz. They are both healthy and doing great! They’re about a week away from being 2 months old and have both gained about 3 pounds since birth. 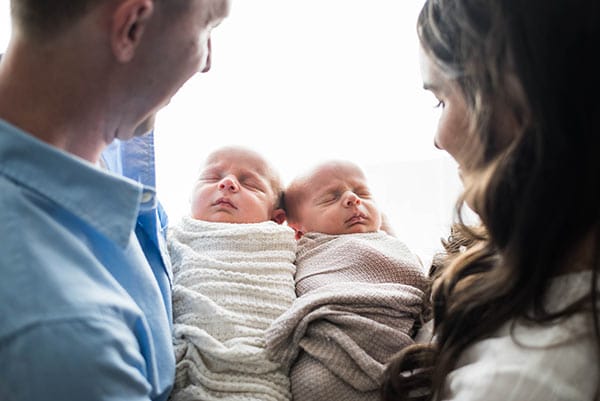 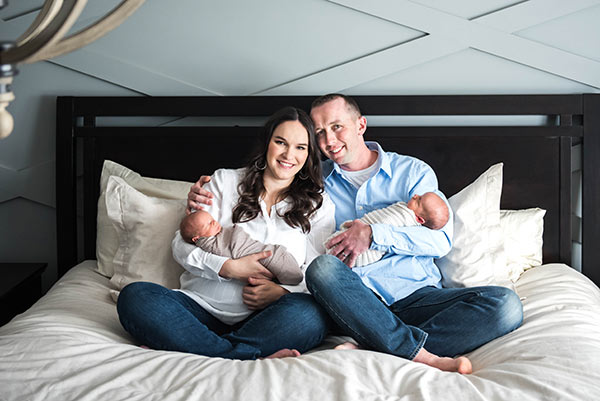 The first 7 weeks have certainly been a handful, but we’ve been very fortunate to have great help from family in the area and from my mom, who has been staying with us since they were born, with the exception of one week. Such a big help!

Despite the sleep deprivation, it’s been so fun to see them grow and change so much already. They have such personality! Ashton is the more serious and curious one and Brooks is totally chill and happy as long as he’s got his milk. Brooks has also started rolling over in just the last couple of days, which is fun to watch. They are such sweet little love bugs. 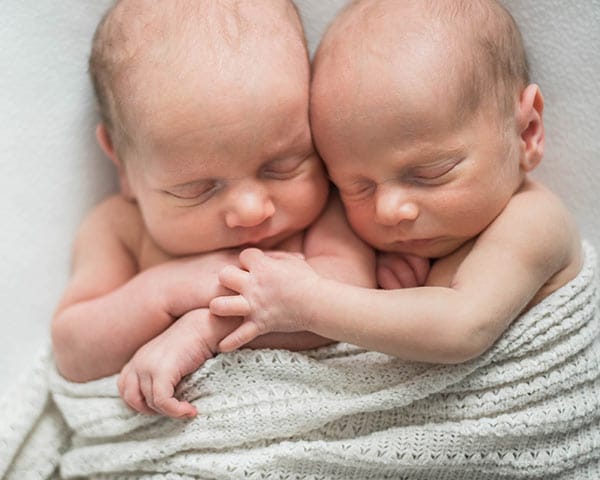 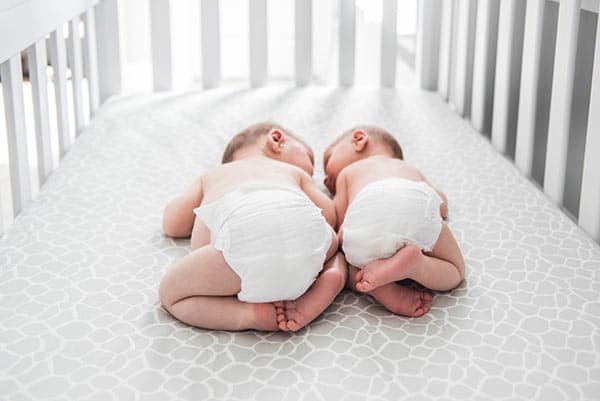 My Experience Having Twins

But lets back up just a bit for those that are interested in their arrival into this world/their birth. I mentioned above that the C-section came early. They were born just why of 36 weeks. Well, the end of the pregnancy was quite a doozy. I’ve always had low blood pressure and did throughout my pregnancy up until the end. By the last month or so, my blood pressure had risen and I was so swollen I couldn’t wear anything on my feet other than the hubs’ very big slippers. No joke. We even tried to go out and buy some women’s slippers for me, but nothing fit.

As you may have read in various blog posts, during that last month we had two doctors appointments a week for monitoring the boys since they were mono-di twins. One was an ultrasound with the perinatologist and the other was an NST for monitoring their heart rates with my OBGYN.

Well that final week, the OBGYN called a couple days ahead of my NST appointment and said there had been some elevated levels in my last blood test and my blood pressure was borderline (and actually was too high if I did anything other than sit on the couch), so they wanted to do a 24 hour urine test to test for preeclampsia. So we did.

Then the night before our NST appointment, something shifted for me. It’s hard to say what it was, but I just had a feeling that this was the end. That it needed to be the end. I’m kind of stubborn and kept going with all the things I could, even baking, up until the end. That last week though, I had finally stopped and that last day, I knew something had changed. 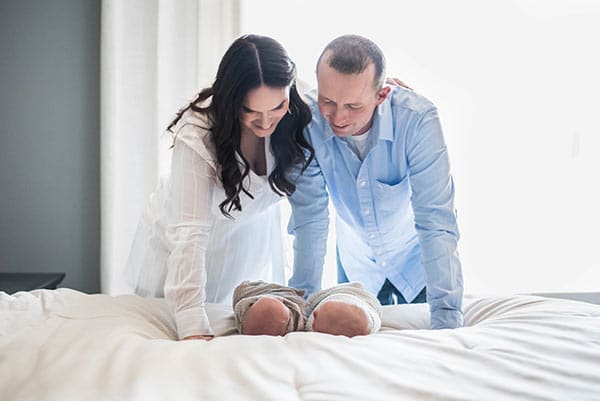 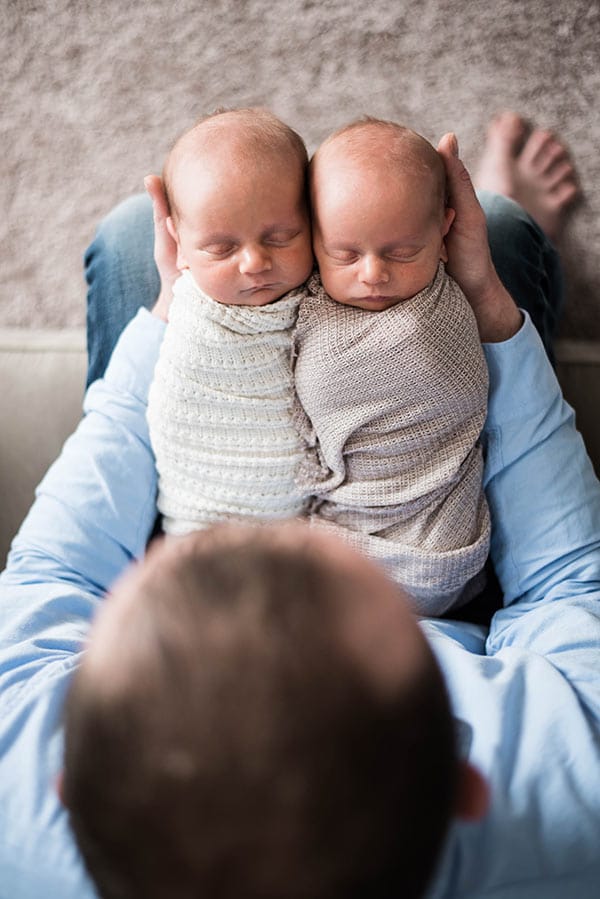 The next morning, I told the hubs that I really felt like these babies needed to be born by the end of the weekend (it was Friday). I was concerned for them. We went to the NST appointment and they monitored the twins and they were perfectly happy, but the hubs wasn’t totally convinced. I had started downplaying things a bit and feeling like maybe I’d been a little dramatic that morning. But the hubs knows I don’t cry wolf and make a big deal out of things, so he brought up my earlier concerns to the doctor. The doctor initially was going to let me go home and then call later about the urine test, but changed his mind a few minutes after he left the room. We were sent to the hospital for further monitoring and to wait for the results of the urine test.

Well, several hours after getting to the hospital, the doctor came into the room and told us that she’d been totally expecting to send me home. My blood pressure was borderline but ok, and the babies were totally fine. However, they look for a protein level in the urine to be under 300 and mine was above 4,000! I would be having a C-section two hours later. Pretty much as soon as possible.

We had about 20 minutes to cry, get our head wrapped around everything and call our moms so they could get to the hospital and let everyone else know what was happening, and then it all started. IV’s and epidurals were put in place and it all happened so quickly from there. The twins were born healthy and we were thrilled! 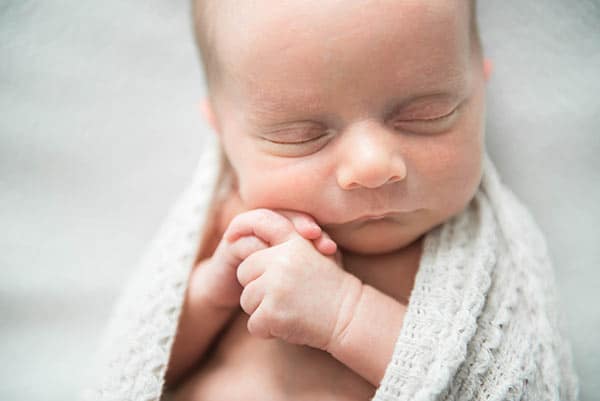 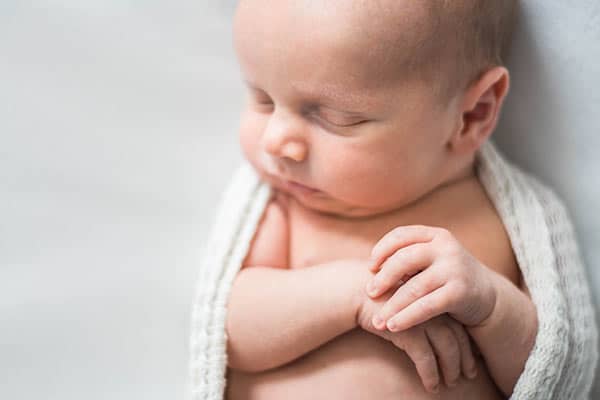 The whole C-section and birth experience were kind of rough for me and quite different than I’d expected. I don’t know if it was because of the preeclampsia, but the epidural they gave me was so strong I could hardly breathe during the entire procedure. I threw up on the table several times and they had to give me some kind of “upper” multiple times because my blood pressure got so low. It was hard to focus on the birth because I had to work so hard to breathe. I felt very out of it for hours, even in recovery. I then had issues with pain medicine that kept me in more pain than necessary a few times. Having not ever had a major surgery before, I’ll say that recovery was very painful and not easy, though it slowly got better and by about day 10, I felt pretty good.

So after two nights in the hospital, everything was going relatively smoothly. Then on the third night, the boys went for their carseat tests that the hospital does to make sure they can handle being in their carseats before they can leave. During the test, Ashton’s heart rate sped up to over 300 bpm so he was rushed to the NICU. After getting his heart under control, we were informed that he has SVT, specifically Wolff-Parkinson-White syndrome. It was very scary and led to a week long NICU stay while they adjusted his medication, but overall it is quite manageable and something that could resolve itself within his first year. Looking back, we are thankful that they found it when they did. Had we not known about the condition, it could have been bad. But so far he’s done extremely well and the cardiologist is very happy – as are we.

Coming home from the hospital with just Brooks and having to leave Ashton behind in the NICU was maybe the hardest thing ever. It was awful. I knew I needed to be there for Brooks, but also wanted to be there for Ashton. Talk about tearing my heart in two! The hubs stayed at the hospital with Ashton for the next several nights, while I was mostly with Brooks. I was able to go visit Ashton during the day, but with the preeclampsia, I wasn’t healthy enough to be there for long. My swelling and blood pressure actually got worse before it got better, and I kind of think the stress of Ashton being in the NICU had something to do with it. We didn’t have a full understanding of his condition initially and it was scary and stressful. 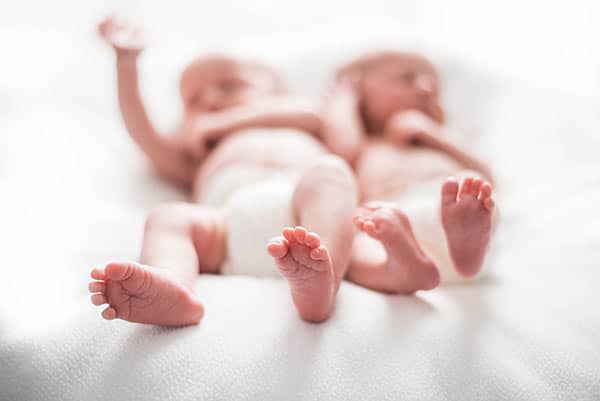 Once we finally got both of them home, it was a big relief. Yet, postpartum was so much more than I expected. I was so thankful that the twins were both home with us, but the “baby blues” hit me like a ton of bricks. I was totally overwhelmed by having two babies and all that entails and also from the massive change I noticed in my body post-pregnancy. I had a moment where I realized I would never be the same and just cried. Not to mention it took just over 2 weeks for my milk to come in, so I was pumping like crazy trying to get anything I could and felt like a cow. It’s totally amazing to me how having a baby – not to mention two – TOTALLY turns EVERYTHING upside down. There is no way to prepare for it, just like people had always said. It completely overwhelmed me.

After a fair amount of prayer, I finally had a moment a few weeks later where I realized that fear and being overwhelmed had kind of gotten the better of me. Since then I can’t say that I haven’t had those moment of being overwhelmed at all, but it’s much better. I feel much more joy than fear and am enjoying becoming a mother – I say “becoming” because I truly feel like I had to become one, it wasn’t an overnight thing. The hubs says I’m too hard on myself, but none-the-less, that’s how it feels. Babies are a massive learning curve and I’m finally starting to feel like I’m catching on. Yay!

So now we are trying to figure out what life might look like with two babies. The hubs is back at work after 5 weeks off and I’m trying to get back into the groove of working a bit. Finding the time is hard with the twins, so we are slowly working through what that looks like and getting the right help in place. Most importantly though, we are loving on our boys and enjoying every minute with them we can. I love looking into their beautiful little faces, feeling their warmth and soft skin, seeing them grow and get so strong, kissing them all over and so much more. I love being their mom and can’t wait to experience all that it entails. After such a long road to get here, I am so thankful the Lord saw fit to make us parents to these two sweet boys and hope to never take a bit of it for granted.

The Twins Are a Year Old!
More from Slice of Life