These Fudgy Cookies and Cream Brownies have the best Oreo flavor and were a HUGE hit when I made them. These rich brownies are topped with an Oreo-filled white chocolate topping, and they’re simple to prepare!

It’s no secret that I love Oreo flavored desserts. I only have a ton of them on the blog. From a No Bake Oreo Cheesecake and Ultimate Oreo Cheesecake, to an Oreo Chocolate Cake and Oreo Cheesecake Brownie Trifle, and there’s plenty more where that came from. It was only a matter of time before I stuffed those delectable little cookies into a brownie!

And these aren’t just any brownie. The hubs fell completely in love with them. After cutting them up, I added them to a tubberware container that wasn’t really big enough so I just covered the top with clear wrap. Not exactly my usual air-tight storage job, but momma was tired.

However the hubs came along and very quickly informed me that they were too good to not store them better. So he grabbed a cake storage container (far bigger than needed for storing brownies) and put them in there for safe keeping. He then feasted off of them over the next couple days. He normally shares desserts with friends, but not these brownies! They are SO good!

There were two things that were important to me as I worked on this recipe. First, the brownie on the bottom needed to be thick, chewy and fudgy to the max. Second, I wanted a topping that wasn’t simply a frosting stuffed with Oreos. That just didn’t feel like enough. And I wanted to be able to stack the brownies in a container without the frosting getting all over the bottoms. Is that weird?

Anyhow, I achieved both objectives and these brownies are just addictive. It’s not even fair.

How to Make these Homemade Brownies

To start, there’s the brownie base. To make these ultra fudgy, the amount of flour was kept to a minimum and there’s no leaver used. Both of those ingredients will lend a more cakey brownie, so they are kept under control here.

These brownies also use both cocoa powder and melted chocolate. I love using a little bit of both to get both the strong chocolate flavor that the powder gives while also getting a little extra fudgyness from the melted chocolate. I went with Hershey’s Special Dark Cocoa in these brownies to try and mirror the dark color of Oreos, but you could also use regular unsweetened cocoa. 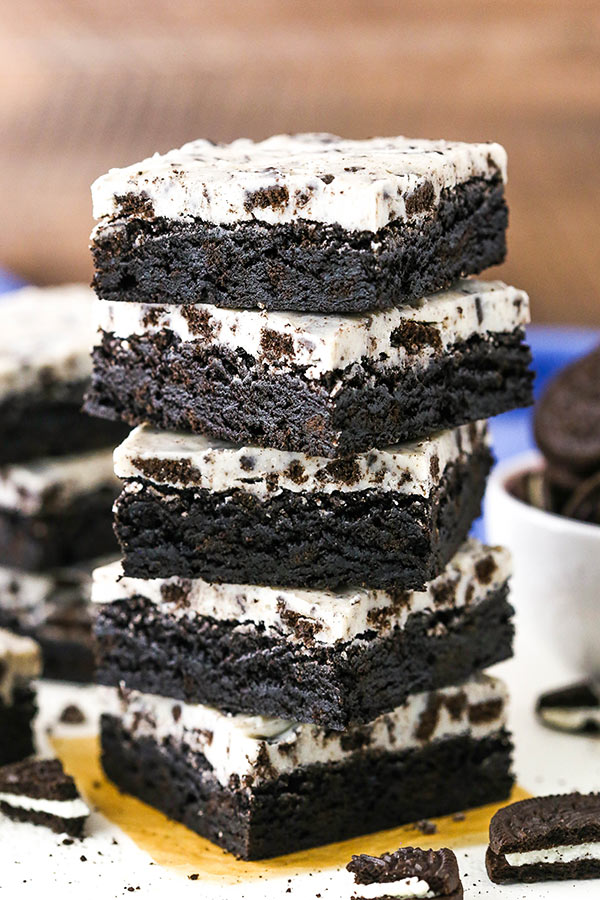 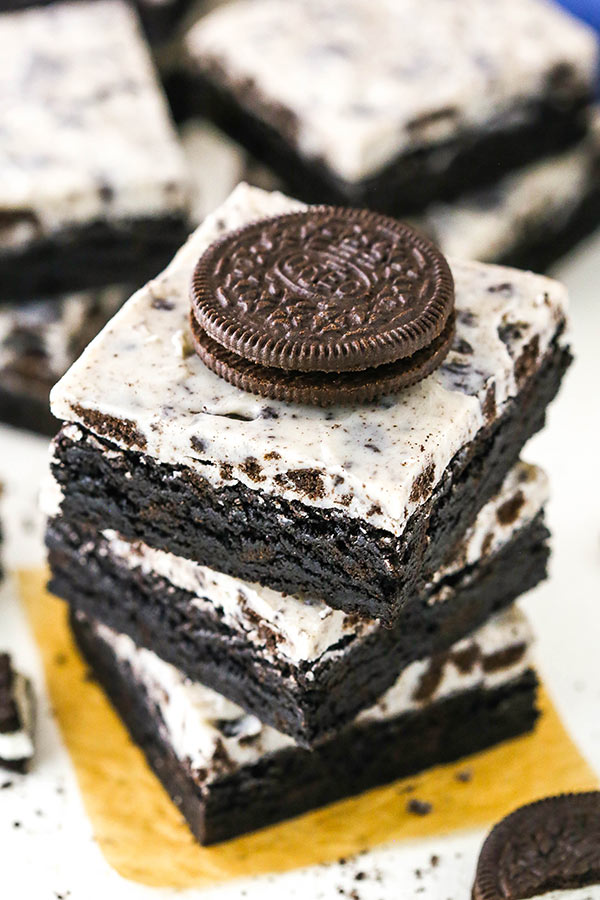 Most of my recipes for cakes and such use the creaming method. We aren’t doing any of that here. Creaming adds air and lift to batter and we want dense and chewy. So the butter and chocolate are melted together, then the sugar is added, followed by the eggs and vanilla. You just need a whisk and a bowl. No need to break out the mixer.

The dry ingredients are added next and should just be stirred in with a spatula. The batter will be very thick, so you want to carefully and slowly combine it all. Don’t over work or over mix it.

Chopped Oreos are added just before adding the batter to the pan. While you can’t see them really well, they are there and they give the brownie base a delicious Oreo flavor without making them crunchy. It’s almost like the Oreos just melt into the background and leave their flavor behind. Yummy!

After the brownies bake, it’s time for the topping. Add the white chocolate chips and heavy whipping cream to a bowl and heat in about 20 second increments until it’s melted and smooth. It’ll be kind of thick and that’s ok.

Stir in the powdered sugar and chopped Oreos, then spread the mixture over the top of the brownies. Don’t be alarmed – the mixture is THICK! Allow the brownies to cool completely, then cut into squares.

Trust me, you’ll be completely sold with the first bite. The cookies and cream flavor is totally amazing. They look simple and unassuming, but they are PACKED with Oreo flavor and highly addictive! And seeing as they’re so easy to make, this is a treat you will want to make regularly. 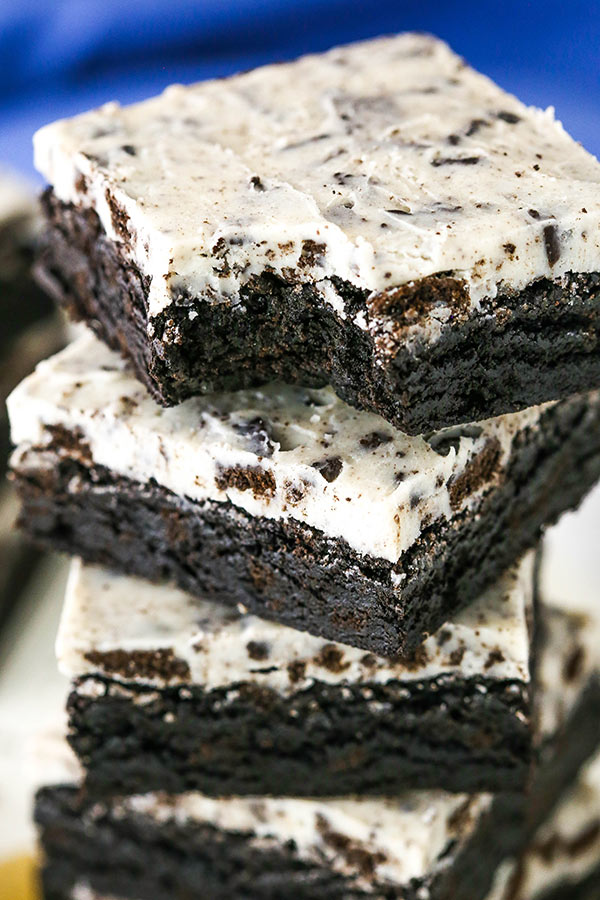 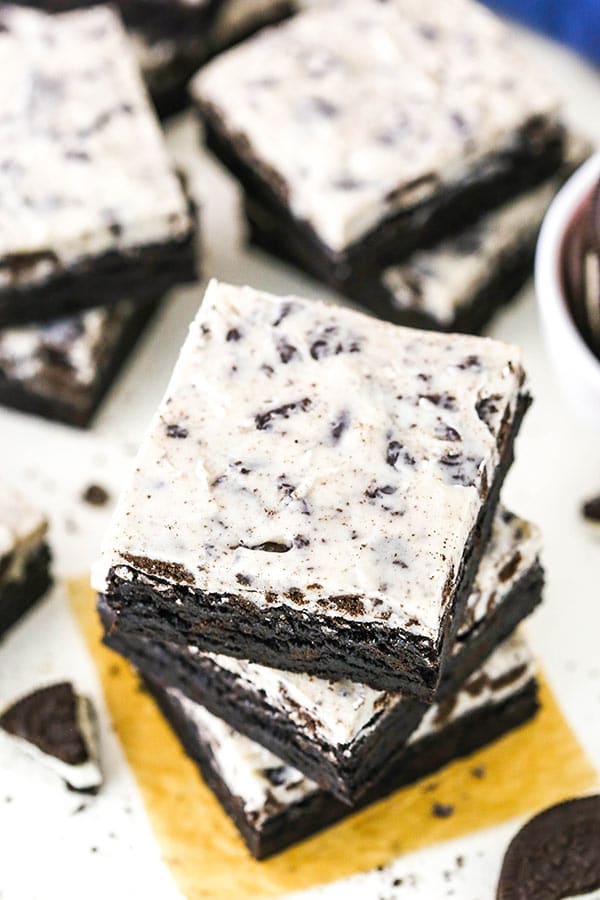 My Fudgy Cookies and Cream Brownies have the best Oreo flavor and were a HUGE hit when I made them. These rich brownies are topped with an Oreo-filled white chocolate topping, and they’re simple to prepare!