These Cinnamon Sugar Swirl Cupcakes are a dream of mine come true! There’s cinnamon in the cupcake batter and layers of cinnamon sugar in the cupcake! Then, they’re topped with cinnamon frosting and sprinkled with a little more cinnamon and sugar. I couldn’t stay away from them!

Crazy about these cinnamon cupcakes? You’re in for a treat with my Mini Cinnamon Roll Cheesecakes! 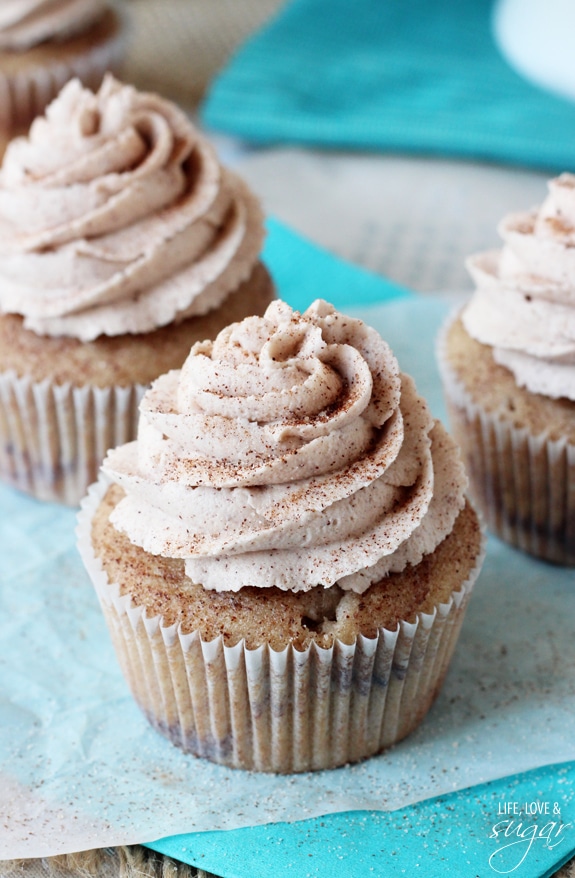 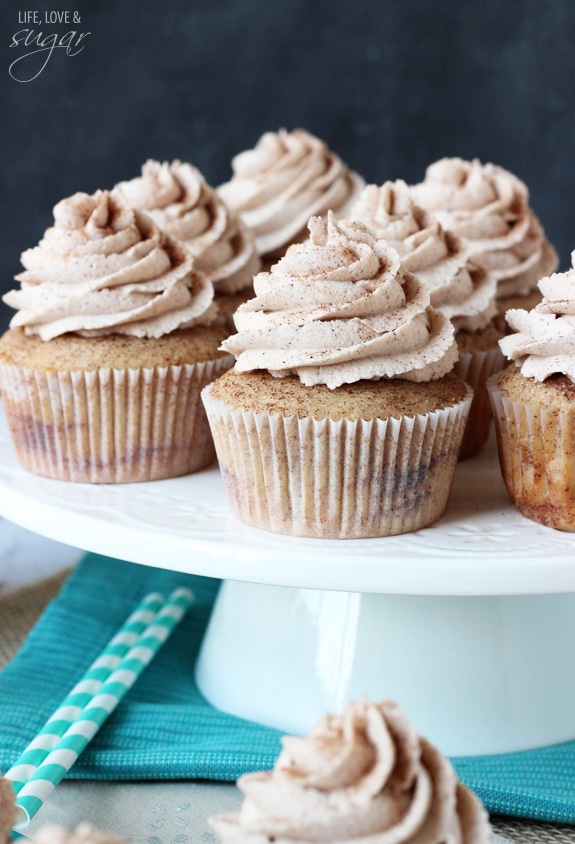 I made them just before going to BlogHer Food last week, so I had to give a lot of them away to the neighbors. It was sad, but kind of good – I’d have eaten them all!!

Speaking of my trip, it was amazing! SO much fun. But I am completely worn out and have a bit of a cold now though. I need a vacation to recover from my vacation. 🙂

It was non-stop fun. Definitely the best part of attending these conferences is getting to meet everyone in person. Blogging is such a new and unique thing that brings it’s own challenges and one of the great things about being around so many bloggers is that we all get it!

Between seeing old friends and making new ones, spending time with everyone is the best. There are so many amazing people blogging and I’m so blessed to call even more of them my friends after this weekend.

I’ll tell you even more about it later, but for now, let’s get back to these cupcakes… 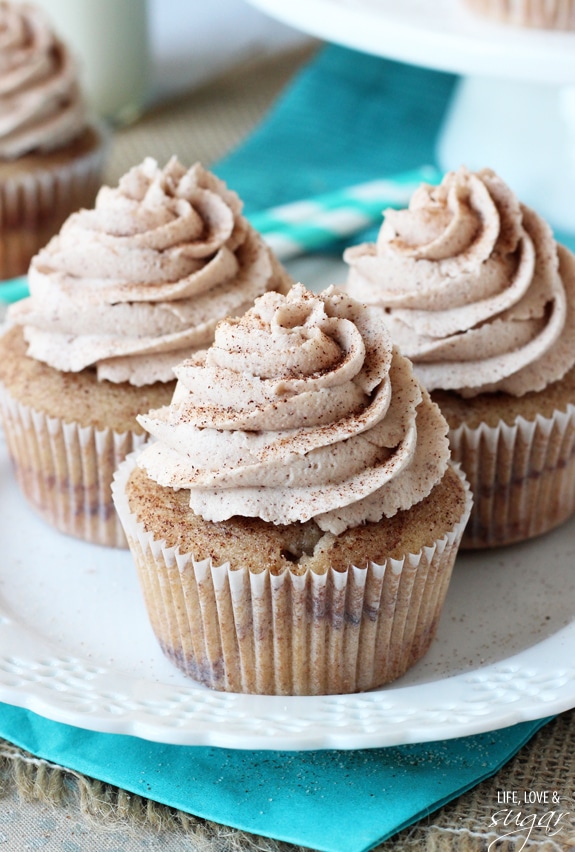 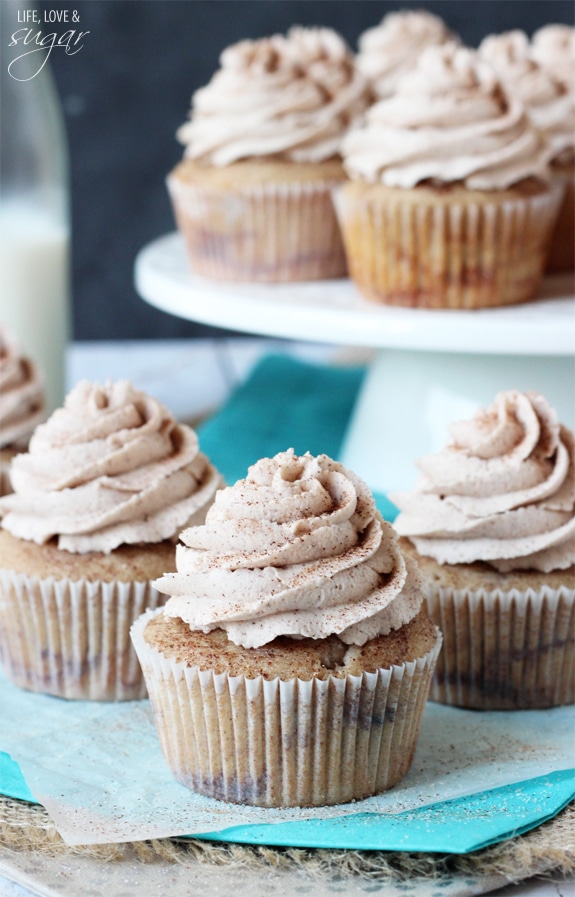 I absolutely love anything covered in cinnamon and sugar, so naturally I’ve been wanting to make cupcakes like these for forever. Now that I have my wonderful vanilla cupcake recipe, I’m going to be bringing you all kinds of fun cupcake recipes and these Cinnamon Sugar Swirl Cupcakes are one of the firsts.

Why I Love This Cupcakes Recipe

They are soft and moist, kind of a mix between fluffy and dense and absolutely FILLED with cinnamon.

And I didn’t just want to add cinnamon to the batter. I wanted them to be unmistakably cinnamon-y. I figured what better way to do that than with layers of cinnamon sugar – kind of like a cinnamon roll. Best idea ever. 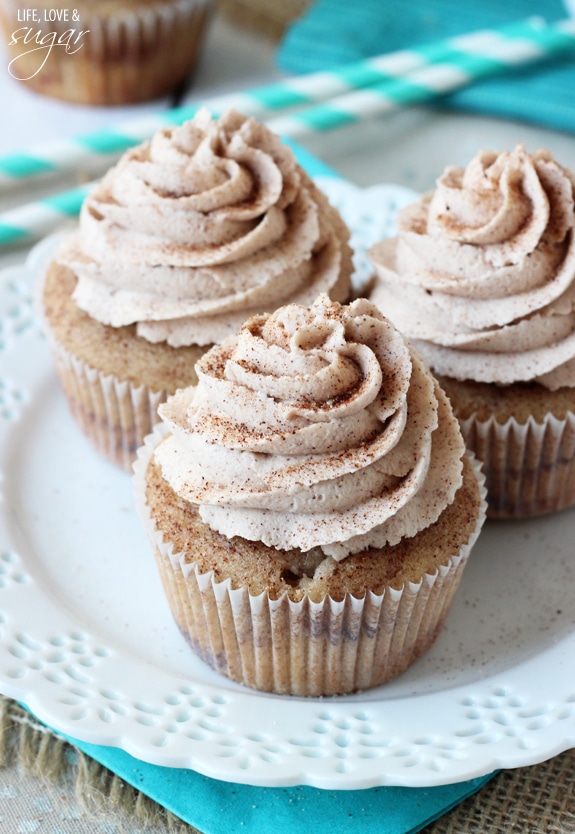 I store my cupcakes in my cupcake carrier and I loved taking the top off and having the smell of cinnamon sugar hit me like a tidal wave. You can almost taste the cinnamon in the cupcake without even biting into it.

The recipe’s great too, because you only need one bowl for mixing together all the ingredients. Less dishes = score!

The only thing about the recipe that takes a little time is layering in the cinnamon sugar. It’s the heart and the best part of the cupcake! I had a little assembly line going. 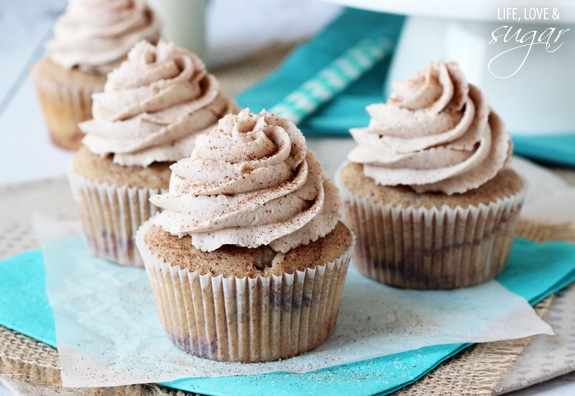 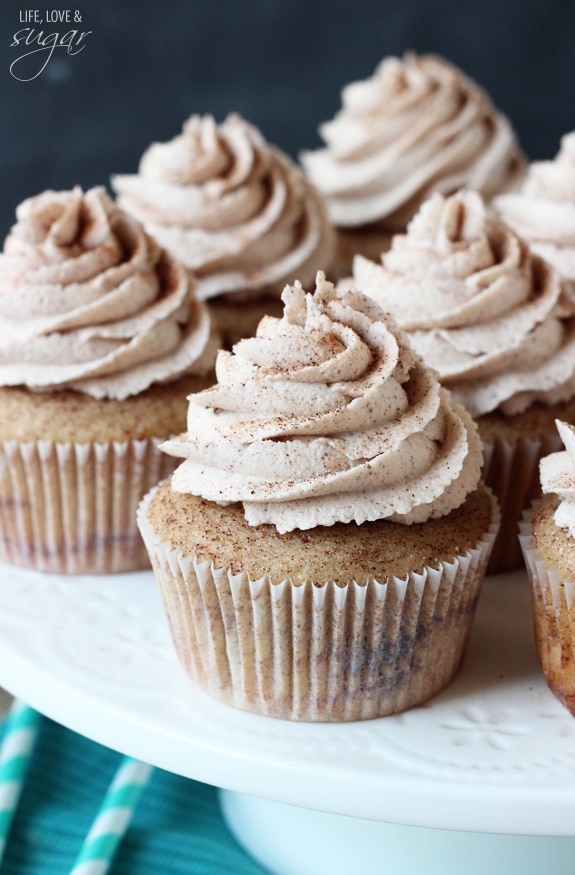 I put all the cupcake liners in the pan, added the first tablespoon of batter to each one, then added the first layer on cinnamon sugar, then repeated. I found it much easier to do each step all at once that do one cupcake at a time and have to keep switching between pouring utensils. You can do whatever you think works best, but that worked for me.

The hubs actually compared the taste of them to being a bit like a cinnamon roll – but cakey. Who doesn’t love cinnamon rolls? Plus, you can eat those for breakfast, which totally makes these cupcakes breakfast food too. 😉 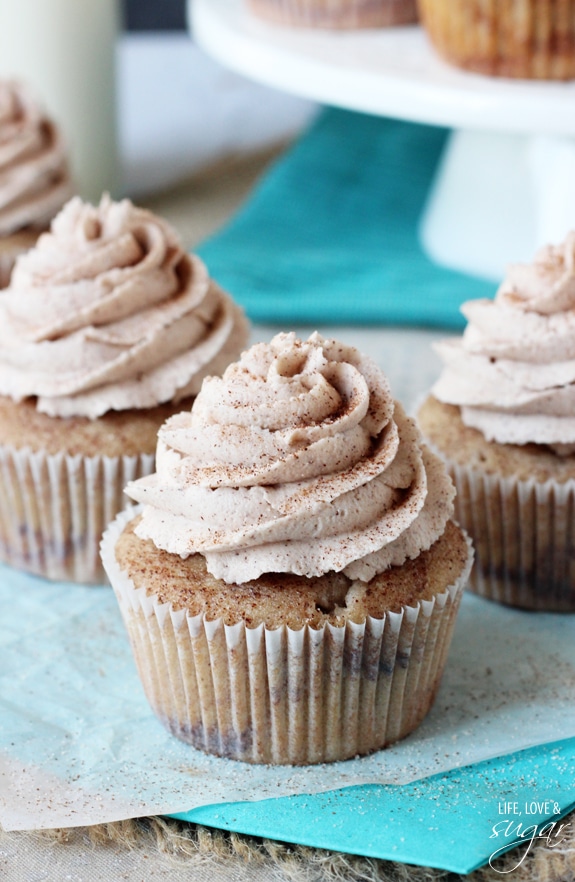 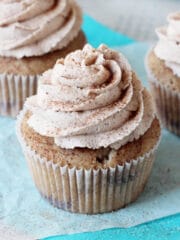 These Cinnamon Sugar Swirl Cupcakes are a dream of mine come true! There’s cinnamon in the cupcake batter and layers of cinnamon sugar in the cupcake! Then, they’re topped with cinnamon frosting and sprinkled with a little more cinnamon and sugar. I couldn’t stay away from them!

1. Preheat oven to 350 degrees.
2. Whisk together flour, sugar, cinnamon, baking soda and baking powder in a large mixing bowl.
3. Add butter, egg whites, vanilla, sour cream and milk and mix on medium speed until smooth.
4. Combine cinnamon and sugar in a small bowl.
5. Add cupcake liners to cupcake pan.
6. Place 1 tablespoon of batter into each cupcake liner, spread evenly.
7. Sprinkle 1/4 tsp of cinnamon sugar onto batter.
8. Repeat steps 6 and 7.
9. Add one more large tablespoon of batter to each cupcake liner.
10. Sprinkle a bit of cinnamon sugar on top of each cupcake if you want. Liners should be about half full.
11. Bake for 16-18 minutes, or until a toothpick comes out with a few crumbs
12. Allow to cool for 1 minute, then remove to cooling rack to finish cooling.
13. To make the icing, beat the shortening and butter until smooth.
14. Slowly add 3 cups of powdered sugar. Mix until combined.
15. Mix in the cinnamon, vanilla extract and 1 tbsp water.
16. Add the rest of the powdered sugar and mix until smooth. Add more water to get the right consistency, then ice the cupcakes.

These are the parties I link up to. 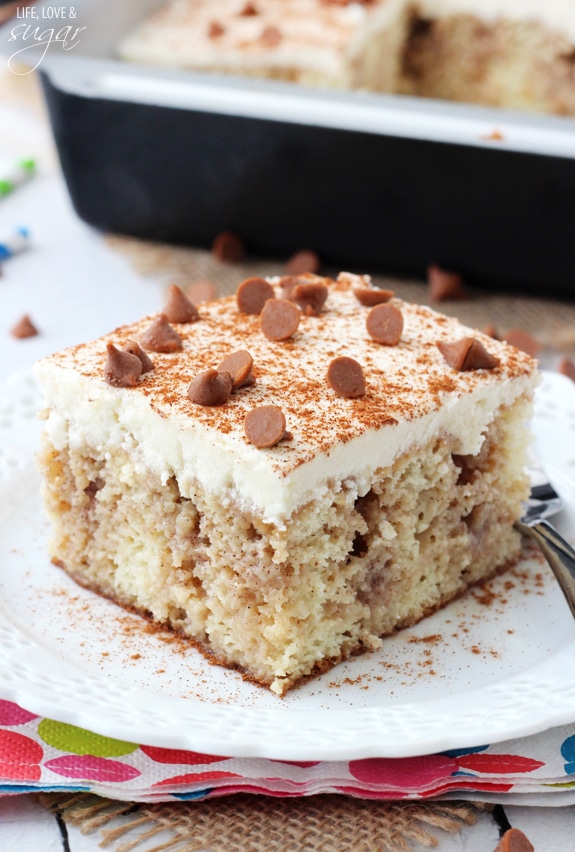 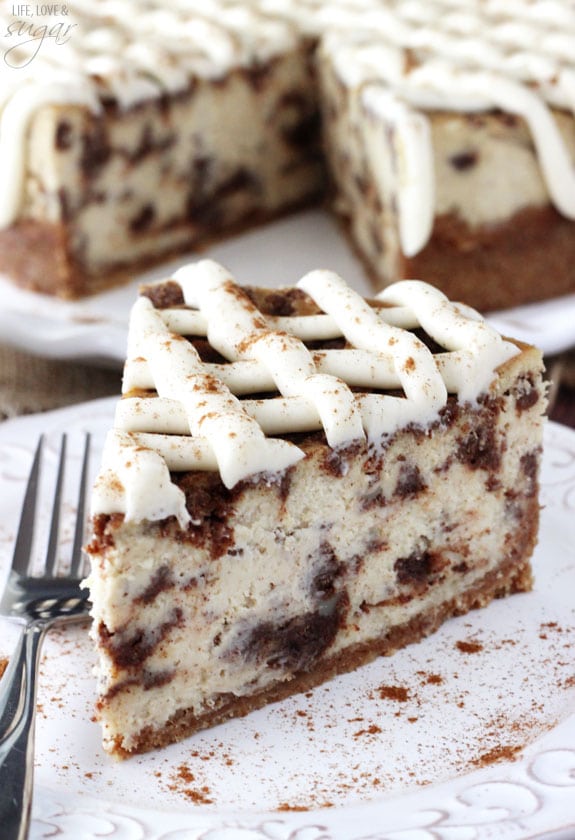 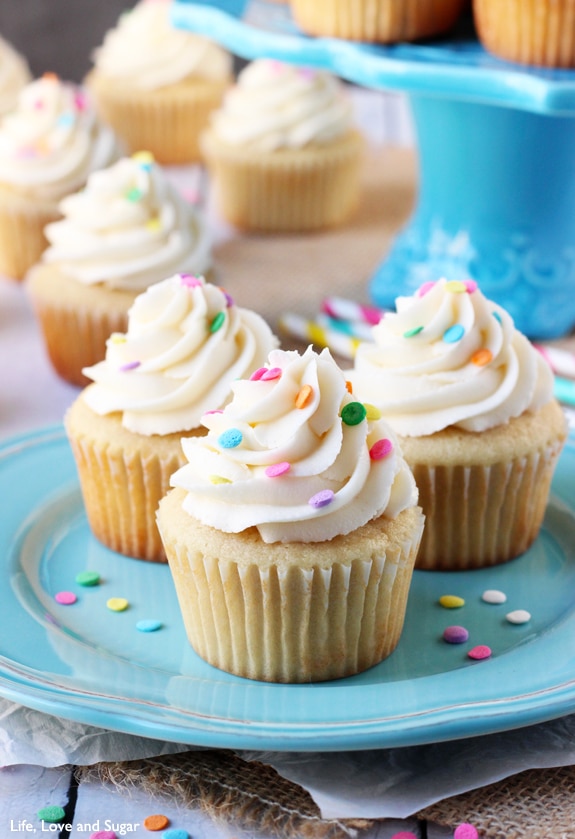 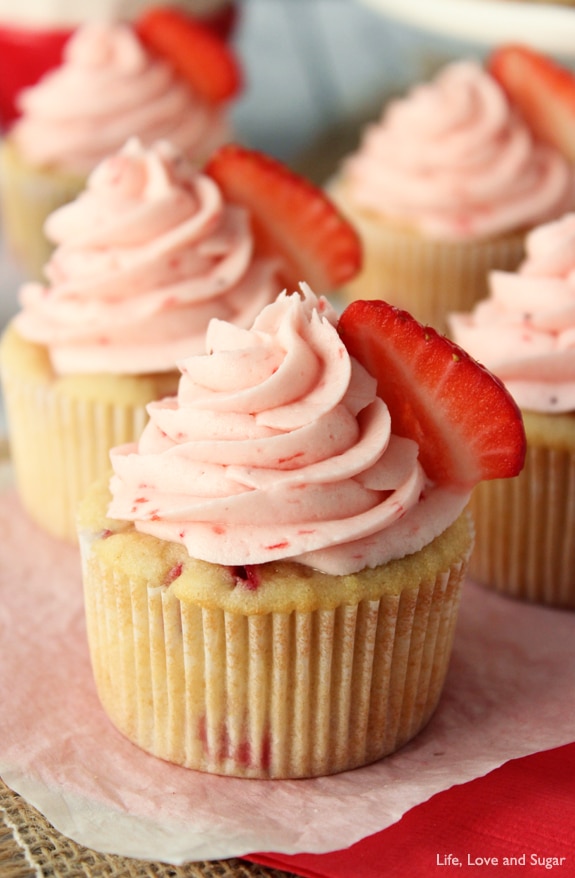 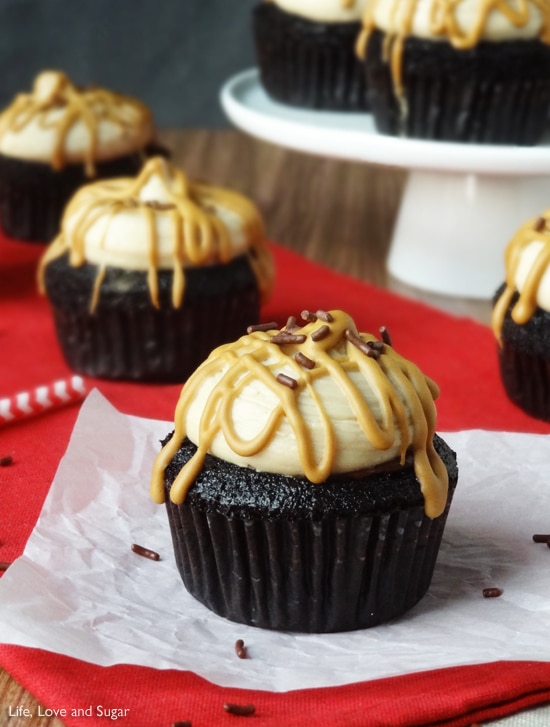 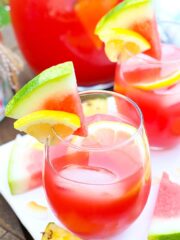 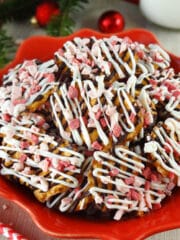 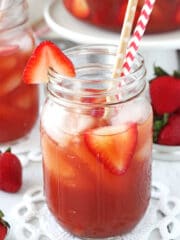