So today I’m doing something a little different on the blog. I’m sure you can already tell by the title of this this post, but today I’m getting really personal. It’s been on my heart to talk about this for a while and for some reason, now finally seems to be the time.

This month marks a year ago that I had a miscarriage. And, it had been a year since we’d begun trying to conceive. This month marks two years since the first month we tried to start a family. So let’s go back to about a year ago…

After having tried for a year to get pregnant with no luck, we started talking about whether or not we should look into fertility issues. We’d seen some friends go through it, so we knew how emotional, involved and expensive it could be. I didn’t want to go through all of that if we didn’t need to.

When we first started trying to conceive, I wasn’t feeling overwhelmingly like I needed to get pregnant right away. We knew we wanted to be parents, and we felt generally like we were ready, so we stopped using birth control and decided we’d see what happens. We were leaving it in God’s hands.

But with that year mark approaching, I started to wonder – is it something we need to look into? I prayed about it – a lot. I was hoping for some kind of sign that we didn’t need to do tests. That the timing just wasn’t right yet for getting pregnant.

Then friends of ours who’d been trying for about the same amount of time told us they were pregnant. They’d used a phone app the 3 months prior to track her cycle and it appeared to have worked. So I figured I’d give it a try. If I used that for a few months, and still nothing, we’d look into getting tested. I knew the days I’d started my cycle for the previous couple of months, so I put them into the app.

Within the first month of using that app I got pregnant. It was a Friday morning when I found out. We’d taken a test the Monday before, but it was negative. So I waited until two days after my missed period before testing again. I took three positive tests before we believed the results and let ourselves get excited.

My husband came and met me for lunch at work and started asking about paint colors (the last thing I thought he’d want to talk about, lol) and we called our parents to tell them the news.

It’d taken a year to get pregnant, but only one exciting morning to be thrilled to become parents. The pictures below were taken the next morning. 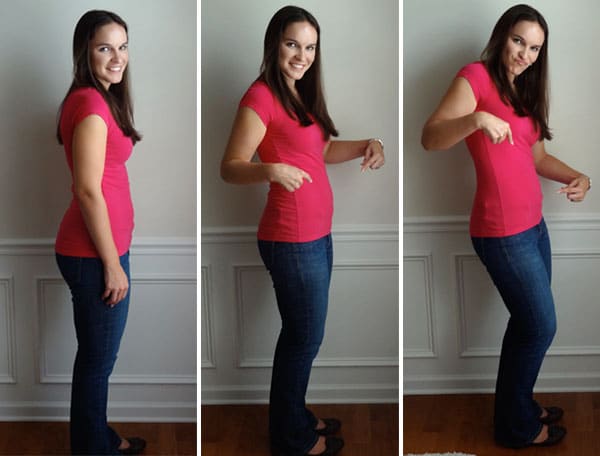 I didn’t even consider that a miscarriage was a possibility because the timing just seemed so right. I’d be praying about it and it seemed like my prayers had been answered. I mean, it’d taken a year after all. Surely if I’d finally gotten pregnant, it was right.

It was only a week later, to the day, that I began to miscarry. It was a Friday night, so the doctor’s office was closed. We Googled and tried to figure out what to do, but ultimately decided to wait until the appointment I already had scheduled for Monday. The appointment where we were supposed to hear the heartbeat for the first time.

When the doctor came into the room, she had this expectant look on her face, ready to talk about about what questions we had. I didn’t realize the test I took when we got there was still showing positive, so she thought all was good. I told her about what was happening and she said it could be nothing, but they’d do an ultrasound to make sure.

The doctor’s comments had given me hope. While we were waiting for the ultrasound room to be ready, I grabbed some of the pamphlets they had about baby stuff.

The ultrasound confirmed our worst fears. Though my body still thought it was pregnant, the screen clearly showed there was nothing there anymore.

It’s nearly impossible to describe the disappointment and sadness we felt. We mourned our baby. We had already told our closest friends and family about our pregnancy – wanting to share our joy. Now we had to call them all back and tell them the news. Saying it over and over again was torture. If we ever have another shot at this whole thing, I won’t be telling everyone so soon again.

And then I wondered, if it had felt so right, if I’d been praying so hard and my prayers seemed answered, why did this happen?

We never know the answer to that question in the moment. When you are feeling that much pain, it can be hard to trust in God’s timing. Yet, trusting in his timing is absolutely the thing that got me through it, though I needed regular reminders.

I admit that I kind of thought we had figured it out somehow. The app had told us when to go for it and magically we had gotten pregnant. Surely it wouldn’t take another year to get pregnant again, right?

You know the saying, “Tell God your plans if you want to hear him laugh”? I imagine he’s been laughing at me pretty hard right about now.

It has been another year. And my goodness, the second year has been so much more difficult to deal with than the first.

The first year was very relaxed. I truly wasn’t worried about getting pregnant.

This past year has been…different. It’s so hard to describe the feelings that I’ve had about it. I still try to be relaxed about it, but recently I have started to feel more of a need to get pregnant. Over the past two years, my husband and I have grown so much as individuals and as a couple. I think I just want it for us that much more. I truly can’t wait to experience pregnancy and children with him and I hope we’ll get to experience that.

I believe it will happen in God’s timing. I want it that way. I know that whatever His plan is, it is bigger and greater than I could have possibly planned. I know that the growth we’ve had is all part of that plan.

But something changed in me after that miscarriage. I can’t even describe it. I don’t want to replace that baby; there’s no replacing what we lost. But I want that excitement back. I want to know we are going to be parents. I want to have a child with my husband. And that has become so much more real to me after getting pregnant. It’s a crazy, weird, different kind of struggle now.

I can’t really pinpoint why I’m emotional sometimes. Is it because of our loss? Is it because we can’t seem to get pregnant after another whole year of trying? Is it because all of a sudden, everyone around us is getting pregnant and we are dealing with this? Do I need to somehow trust Him more?

I think it’s really some combination of all of it. It’s hard to have hope every month that gets crushed. And I admit that I don’t always handle news of other people’s pregnancy very well. There have been a lot of tears.

I pray about this regularly – whether it’s for strength, the ability to trust in His plan for us, or something else. Recently I’ve gone back to praying and wondering again if we need to look into things.

Was that pregnancy a fluke? Do we need help with trying to conceive?

I ended up at the doctor a couple weeks ago because I felt like something was off. Turns out, I was right. What they discovered could actually have been affecting my ability to conceive and has even been associated with miscarriage.

I have no idea what to think about it. Obviously you start to wonder if that could’ve been the problem all along. And if so, why did it have to take so long to figure it out?

Honestly, I don’t know if it’ll make a difference. Will we get pregnant now that that issue has been taken care of? I have no idea. Obviously I’m hopeful, but sometimes the hope feels scary.

What I do know though, is that no matter what, I’ve gotten to a place where I’m so incredibly grateful. And through all we’ve experienced over the last two years, I’ve learned so much. I trust Him more now than ever.

I still believe the prayers that I prayed a year ago were answered, just not in the way I was expecting. The miscarriage is one of the hardest things I’ve ever been through, but without it, I’d never have known that I could get pregnant. We might have started doing tests and it could have been for no reason. And looking back at the past year, there are so many great things that have happened that would’ve happened differently or not at all if we’d had a child. I believe the miscarriage and this past year was God’s way of telling me to wait and teaching me to trust – in Him and His timing.

It has been hard, but my husband and I are in a better place than we’ve ever been. I love him more now than I ever knew I could (and it’s not just because of all of this stuff, we’ve grown in our faith A TON and it’s had a huge impact on us). And I don’t think the changes we’ve seen would’ve happened the same way if a baby had been thrown in the mix.

I’m still sad at times. And I can’t tell you how many times I’ve cried trying to write this. But I’m also happy. And as scary as it is, hopeful.

I trust God and his plan for us. It could be another year before we are able to have a family, if ever, and I have some seriously mixed emotions. I just pray that no matter what, God gives me strength to go through it – the good and the bad. And I continue to be grateful for all the amazing blessings I do have, because there are so many.