These easy Mini S’mores Cheesecakes are made with a graham cracker crust, chocolate filling, melted chocolate and toasted marshmallows on top! It’s such a fun fall recipe – with or without the campfire!

Mini cheesecakes are a great dessert for feeding a crowd and are fun to make! These classic Mini Cheesecakes, Mini Candy Corn Cheesecakes, and Mini Cinnamon Roll Cheesecakes recipes are bound to be hit at your next family gathering. 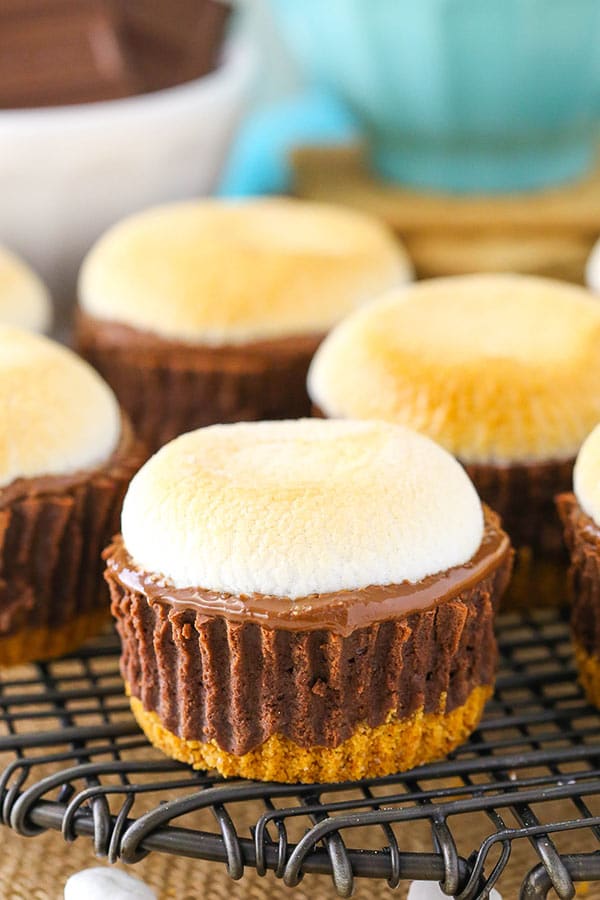 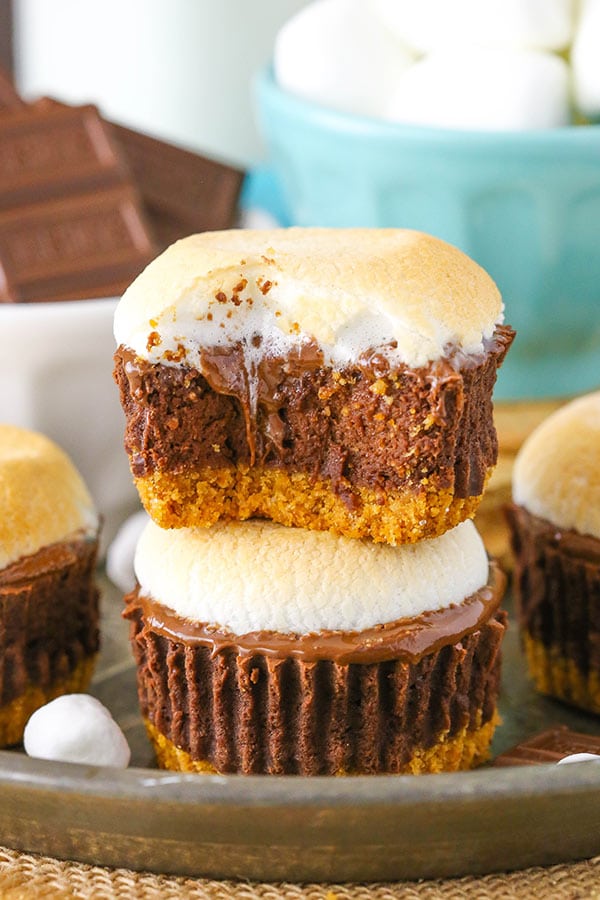 So a couple of weeks ago, the hubs and I got a new family car. With two kiddos on the way and a car that was acting up, we decided to just make a change. I totally love the car, but when I had to clean out my old car, the salesman reminded me to check my CD player. It was a great recommendation, because I’d totally forgotten. Naturally when I hopped into the new car, I went to put my Michael Jackson CD in the new CD player and realized for the first time that there wasn’t one. How in the world will I listen to all my awesome old-school CDs?!

I feel like a total old person all of a sudden! I miss my CDs! I know we all listen to music on our phones and other devices now, but I still have some rockin’ jams that I have no idea how to listen to now. 🙁 I’m told there are apps I can download, but it sounds like I either have to re-purchase all the music or buy another subscription to another service. I’m not a fan.

Technology is a serious mixed blessing, am I right?

And now I’m officially old. Or maybe you could call me a “classic.” 😉 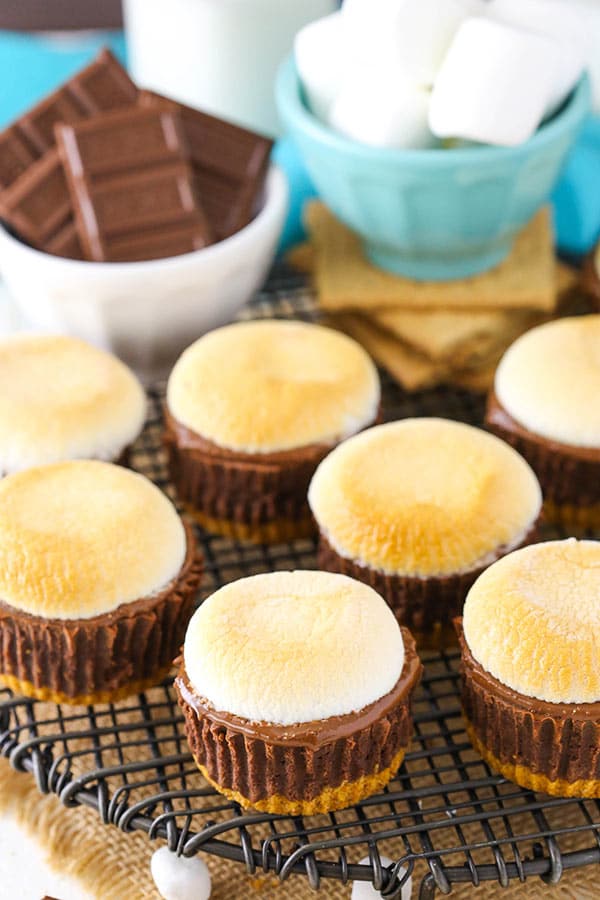 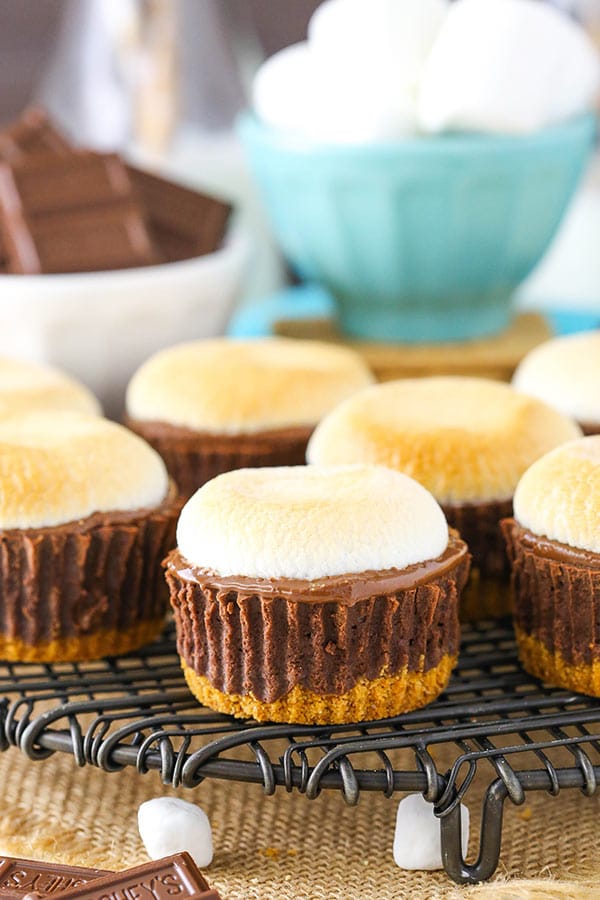 Another classic – which isn’t going anywhere any time soon – is the s’more! The combination of graham cracker, melted chocolate and melty marshmallows is just so good! And I’m loving them in mini cheesecake form!

To start, we’ve got the classic graham cracker crust. Obviously a must-have. They are pre-baked in little cupcake liners.

Fill the cupcake liners pretty much to the top, then bake. One nice thing about mini cheesecakes compared to full sized ones is that they don’t need a water bath and they cook much more quickly. Score!

Once the cheesecakes are baked and cooled, top them with a couple chocolate rectangles and a marshmallow and broil them for a few minutes until the chocolate is melty and the marshmallows are starting to brown on top.

When Should I Serve These Mini Cheesecakes?

I personally would suggest serving these just after melting the chocolate and marshmallow, since that’s when they are most s’more-like and tasty! Of course if you refrigerate them, you can always heat them back up as you feast on them one at a time, if that’s your plan. 🙂 Either way, I hope you enjoy them as much as we did! 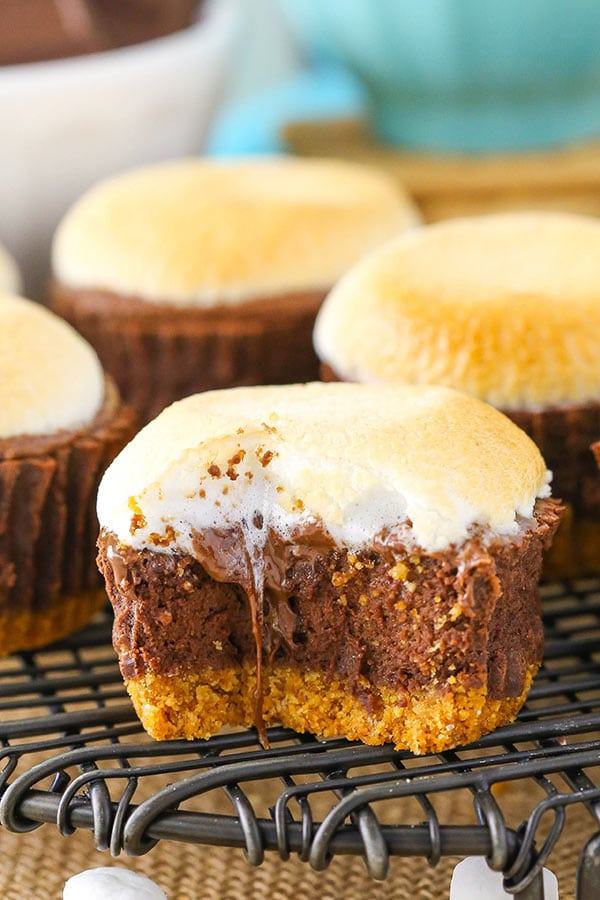 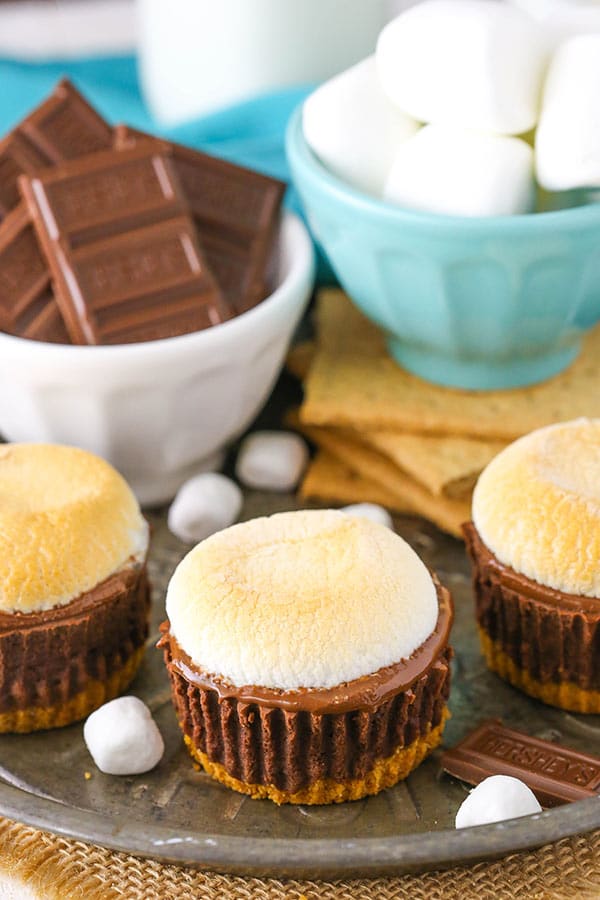 These easy Mini S’mores Cheesecakes are made with a graham cracker crust, chocolate filling, melted chocolate and toasted marshmallows on top! It’s such a fun fall recipe – with or without the campfire!

1. Preheat oven to 325°F (162°C). Add cupcake liners to a cupcake pan.
2. Combine the crust ingredients and divide the mixture between the cupcake liners (about 1 1/2 to 2 tablespoons per cup) and press into the bottoms.
3. Bake crusts for 8-10 minutes then remove from oven. Allow to cool while you make the filling.

1. Reduce oven to 300°F (148°C).
2. In a large bowl, mix the cream cheese, sugar and cocoa powder until combined (Use low speed to keep less air from getting into the batter, which can cause cracks). Scrape down the sides of the bowl.
3. Add the sour cream, vanilla extract and milk. Beat on low speed until well combined.
4. Add the eggs one at a time, beating slowly and scraping the sides of the bowl after each addition.
5. Divide the batter between the cupcake liners and fill most of the way.
6. Bake cheesecakes for 15-17 minutes, then turn off oven and leave the door closed for another 15 minutes.
7. Crack the oven door and allow cheesecakes to cool for 10 minutes, then put in the fridge to finish cooling.
8. Once the cheesecakes are cooled and firm, place a couple rectangles of chocolate on top of each, then a marshmallow.
9. Place the cheesecakes on a cookie sheet and broil until the chocolate is melted and marshmallows are lightly browned. Cheesecakes are best if served immediately. Leftovers can be refrigerated for 3-4 days.