As a kid, I totally ate all the good cereal. You know, the ones full of sugar and good stuff? Lucky Charms, Fruit Loops, Fruity Pebbles, Cinnamon Toast Crunch (!!!), among others. While I don’t eat them on the regular as an adult, I won’t lie – every once in a while, I indulge. They are just SO good! And let’s be honest, they make a perfect dessert. 🙂

Lucky Charms marshmallows are pretty much the reason the cereal exists. The rest of the cereal is fine, but if you don’t have at least one marshmallow in every bite, forget it. That bite’s not worth it. So naturally these cupcakes feature plenty of those delightful little marshmallows. It wouldn’t be a Lucky Charms cupcake without them.

HOW DO YOU MAKE CEREAL MILK?

So to get started with these cupcakes, we’ll make the cereal milk. It is just as it sounds – milk that has had cereal soaking it in. In this case, Lucky Charms cereal. Pour the cereal into the milk, just as if you were making a bowl to eat, and let it sit for about 20 minutes. Strain the cereal out of the milk and you’ve got cereal milk! 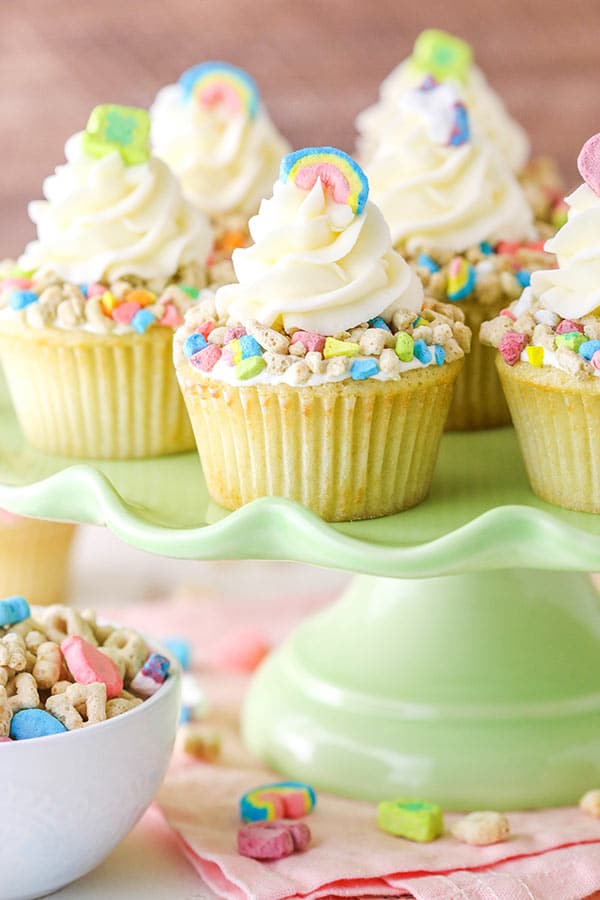 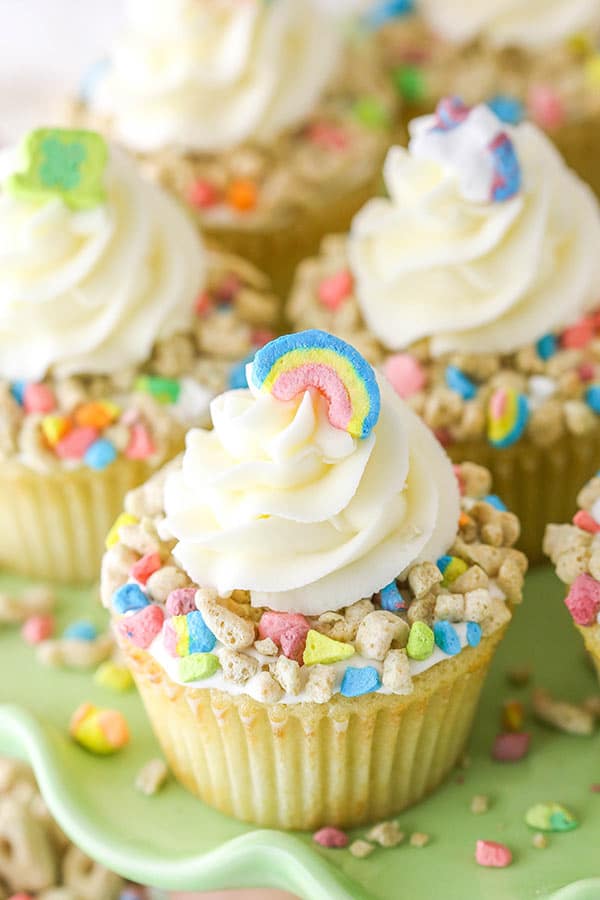 The only question you need to answer at this point is whether or not you are into soft cereal. If yes, eat that discarded cereal. I did. If no, toss it…so sad.

And even though the marshmallows are chillin’ in the filling, they don’t get too soft and mushy. They soften a bit, but they maintain that signature crunch. Mmmmmmm. 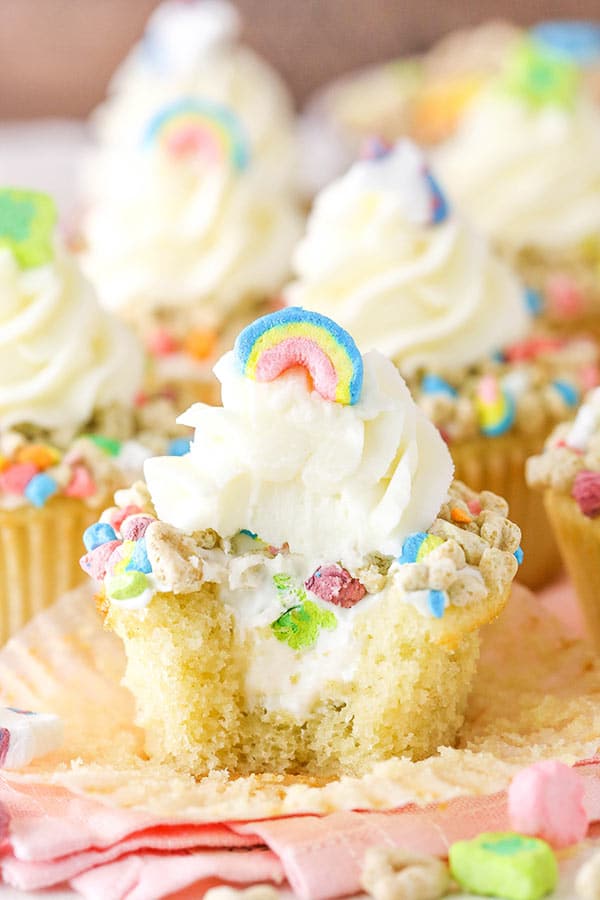 OMG. These cupcakes are awesome! So fun and so tasty! It really is like eating Lucky Charms in cupcake form. The fluffy cupcake with the marshmallow filling and Lucky Charms marshmallows, then the actual cereal crushed up on top – everything in one cupcake and in every bite. Love them!

I will say that the cereal on top softens with time, so I’d suggest that you serve them within a few hours of putting them together. They aren’t bad once softened, but I actually really loved the crunch. It was a nice contrast to the fluffy cupcake and filling.

When I made these, I actually baked the cupcake and filled them one night and then added the marshmallow frosting on top with the cereal and the cereal milk frosting on top the next day. I personally think that works out best. It breaks up the work a bit, let’s the filling sit for a while and keeps the Lucky Charms on the top of the cupcake fresh and crunchy!

These Lucky Charms cupcakes are seriously delicious, fun and perfect for feeding your love for cereal! They’d also make a great addition to a St. Patrick’s Day party! 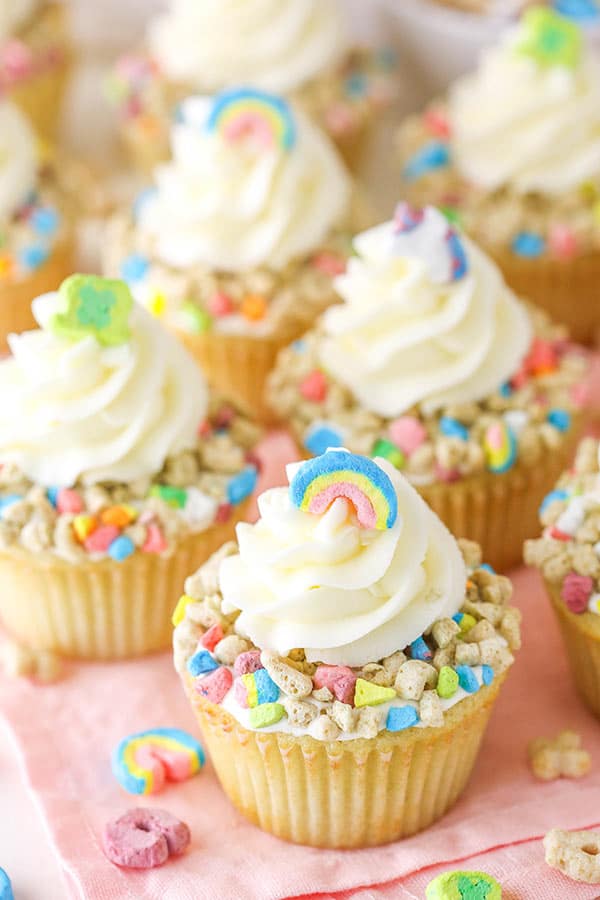 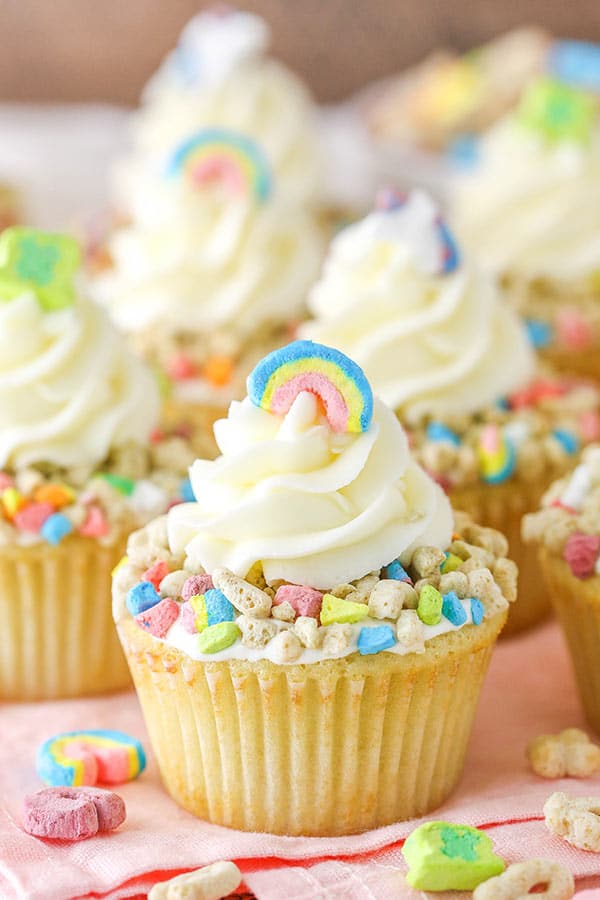 NOTE: The filling for these cupcakes gets better as it sits. The marshmallows from the cereal lend their flavor to the filling over time. You could definitely make the filling a day ahead, if you like. You could even make the cupcakes and fill them and then finish everything else the day they’ll be served.