Have you ever wanted to try Fertility Acupuncture? If you’re on the fence about it, check out my experience and learn what fertility acupuncture entails. 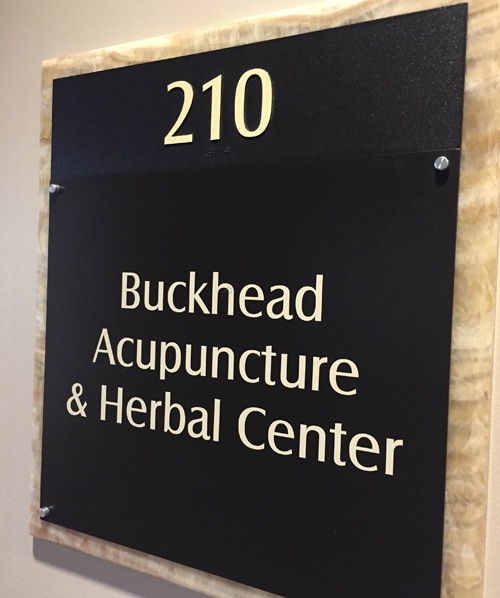 So it’s been awhile since I’ve given an update on the hubs and I and our journey to start a family. The reason is really quite simple. There wasn’t anything to report. We did some initial testing and were told everything looked fine, so we continued on as normal.

{For a little bit of background, we’ve been trying to start a family for just over 3 years. I got pregnant in 2013, but had a miscarriage – Miscarriage and Trying to Conceive – in September 2013 at 6 weeks. Shortly thereafter I had an HSG – Our Baby Journey: Next Steps and HSG.}

Despite getting regular questions from friends and family about whether we’d looked into other options or not, we had not moved forward with anything. I had heard a lot about acupuncture – mostly from my mom – and had been thinking for a while that I should look into it. Back in January I actually called a fertility acupuncturist here in Atlanta to get more information. We chatted for a while and I got off the phone feeling overwhelmed and just cried. I remember I’d just pulled into the parking lot to go to the gym and decided to just go home.

Believe it or not, just making that phone call was a huge step, even though it didn’t lead to anything – yet.

One thing he did tell me was that he works with one of the fertility clinics here in Atlanta and they do informational sessions once a month and that we should look into going to next one, which was in February. I talked to the hubs that night and we arranged to go.

It was one of those things where I went, but wasn’t so sure it’s what I wanted or was ready for. I prayed. I prayed that if we were meant to move forward with something at that time, that I would know. That I would feel the Holy Spirit move in me. But I didn’t. So after the seminar – which was very interesting but convinced me that I would avoid IVF if I could – we left.

And that was it.

While it may seem like I don’t owe anyone an explanation for my decisions, I know that many friends and family ask because they care. And I’m so open in talking about everything, that even my reasoning is shared. Truth is, there are many reasons why we didn’t move forward until now. I say we, but really it was me. The hubs would’ve been happy moving forward with anything whenever I was ready, but he has been so patient in waiting for me to be ready and I couldn’t appreciate that more. But the main reason, the ultimate reason, is that I believe God has a plan for us. I believe His plan will be better than any plan we could make for ourselves. And I’ve been waiting to feel Him push me forward.

A few weeks ago I finally felt ready and I made our first appointment. Again, after getting off the phone with my acupuncturist (the same acupuncturist I called back in January), I cried. I’m even crying as I write this. I’ve learned that I cry a lot now and it’s not always a bad thing. 🙂

So I’ve now had 3 appointments and I wanted to share the experience with you. Pretty much everyone I know has a ton of questions when I tell them what I’m doing so I figure why not share?

Firstly, this is the place I’m going, Buckhead Acupuncture and Herbal Center, and the acupuncturist I’m seeing. Check out those testimonials!

Secondly, how does it work? Well, I have appointments every week in which I get acupuncture. Starting at the third appointment (which was yesterday), you add in chinese herbs. More on that later.

My Experience With Fetility Acupuncture

So the first appointment. I had no idea what to expect. The office is really nice and relaxing. I had to fill out several forms detailing WAY more about my body, sleep habits, bowel movements, menstrual cycles, our sex life, you name it, than I’d ever shared with anyone before. We spent an hour or so going over that stuff before doing anything else.

Then he placed his fingers on my wrists to feel my pulse and checked out my tongue. At this point I’m thinking this is pretty weird. Plus, I apparently have some weird bumps on the back of my tongue that he’s never seen before. He started taking pictures of it so I could see. I’m like, “Just tell me – am I going to die?” 🙂

Later, I learned that checking the pulse and tongue are two big diagnostic elements of Chinese Medicine. Don’t google “chinese medicine tongues.” Just don’t. I had no idea there was such variety in tongues out there – and it’s interesting – but also not pretty to look at.

Then he added the needles!

The first one? Right between the eyes.

I had additional needles on the top of my head, in my hands, between my breasts, on my pelvis, legs and feet. I laid like that for at least half an hour.

The needles didn’t really hurt going in the first time (though they hurt more the second time), except for in one place on my legs where I actually ended up with small bruises.

During my second appointment there were more questions to answer and as I said, the needles hurt a little more. Depending on where I am in my cycle, he adds more or less needles to my pelvis, but the rest seem to stay pretty similar. They could be in slightly different places, but I wouldn’t know for sure. Once he starts putting them in, I don’t move to look. I had an itch on my face yesterday, but I wasn’t about to itch it. If the needle on my hand and face collided, who knows what could could’ve happened! 🙂

The other thing my acupuncturist has you do is buy this book. It’s called The Infertility Cure by Randine Lewis and it’s been a great book so far. It’s such an encouraging and informational book. It’s even made me cry several times – surprise, surprise. She actually experienced miscarriage and infertility as well and turned to acupuncture herself before going on to study and practice it. Here’s a snippet from the beginning of the book that does a good job of describing the book and it’s focus:

“Our reproductive systems are not made up of isolated organs and batches of separate hormones. Each element of the system must work together seamlessly so conditions will be right for pregnancy to occur. When you restore the health of the body, a woman’s reproductive system will do what it was designed to do naturally: conceive and carry to term a healthy child. The first step to fertility isn’t another drug or procedure, or even an acupuncture treatment: it’s discovering a new way of thinking about yourself, your body and your health.”

The book goes through so much about a woman’s body and health and how all the different pieces and hormones play a part in balance and fertility. It’s super interesting and truly has changed the way I look at this whole fertility thing and the way I treat my body.

Then yesterday, my third appointment, it was time to start adding in the herbs. 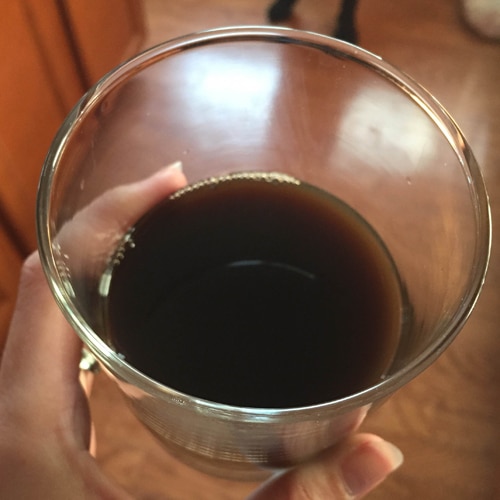 He warns you from the very beginning that they aren’t good, but omg. Seriously. He had my first “dose” for me at my appointment. I took the first sip and thought, “Oh. This isn’t THAT bad. It’s sort of like gross tea.” I even said out loud that it wasn’t as bad as I thought it’d be.

I spoke too soon.

I took another sip and it got grosser. By the third sip I thought I might vomit so I waited a minute. I told myself mentally to put on my big girl pants, then took another sip.

It gets grosser with every sip, no joke. I now describe it as tasting like a combination of a** and vomit. Sorry, but true. It’s nasty. And I have to drink it 3 TIMES A DAY! And it can’t be cold. Room temperature or warm, but not cold. Ugh. Here’s how I feel about it.

That’s for real right there. I can’t even. Holding my nose has become necessary and while it helps…ugh! SO GROSS! I’m pretty positive it’ll make me vomit at some point. See all those packets? That’s for ONE WEEK. ONE. 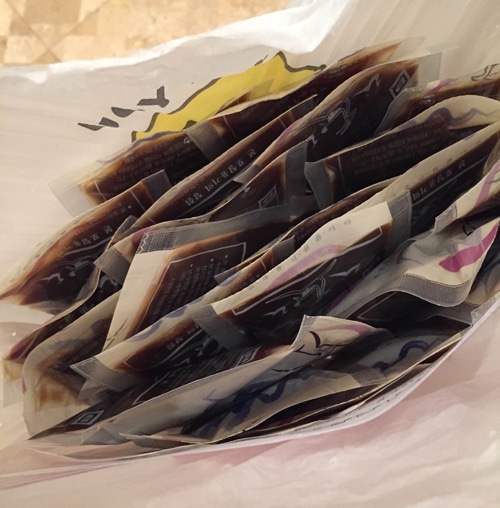 Think I’m crazy? I wouldn’t totally disagree with you. But I’m also excited about the possibility. I feel like a bit of an experiment and I’m curious to see what will happen. 🙂 It’s pretty astounding what women are willing to go through to get pregnant. It’s not easy and the decisions aren’t easy either.

One question I’ve been asked a lot is how long we’ll do this for. I honestly don’t have an answer for that. Like with deciding to do it, I imagine the decision to stop (if that’s a decision we have to make) will happen when it feels like the right thing. I’ve learned over the last several years that it does no good for me to say what I think I’ll do, because I just never know. I’m just waiting on the Lord to direct my path and taking it day by day. In the meantime, I’ll rolling with it. Doing my best to rest when I can and let as little stress affect me as possible. Much easier said than done, but I’m still trying.

I’ve said from my very first post about our struggles that people don’t talk about this stuff enough. Infertility, I mean. I know it’s hard for many going through it to talk about it, but I think more women would talk if they felt like they had someone to talk to who would understand. I know many times I’ve felt misunderstood and while I don’t think people can really understand unless they’ve been through it, my friends and family understand more the more I talk about it. My hope in talking about it is that others going through it are comforted and maybe even learn something, and also that those that know someone going through it (or will know someone one day) will know more about it to be able to talk and ask the right questions if that someone does want to talk.

The hubs and I are obviously hopeful, but we are also reasonable. We know it’s possible that this won’t result in pregnancy. However, I’ve already noticed changes in myself. My ovulation kit results were better this month, my mood has improved so much, getting up in the morning is easier, and other things that you really just don’t want to know about. I guess I figure that even if I don’t get pregnant, all of those changes are good things too. I guess we’ll see! And of course one way or another, you’ll know how this ends. 🙂

Sorry for such a long post, there was just so much I wanted to share. If you’ve gotten this far – thank you! And if you have stories about your own experience, I’d love to hear them in the comments below!

Help Me Make the Blog Better!
More from Slice of Life