These Homemade Funfetti Cupcakes are tender, fluffy and easy to make! They’re full of sprinkles and topped with buttercream frosting!

These Funfetti Cupcakes have been a long time coming. How have I not had a recipe for these until now?? I don’t really know, but I’m so glad to finally have one now. And I’m telling you – these are THE BEST! They are moist, light, fluffy – everything you want. So. Darn. Good.

What Makes These the Best Funfetti Cupcakes?

So while funfetti cupcakes are basically vanilla cupcakes with sprinkles in them, I actually found it more difficult to get these just right than it’d seem. Just add sprinkles? Not so much.

I started with my Moist Vanilla Layer Cake in cupcake form. I’m a big fan of those vanilla cupcakes (and the cake, of course), so it seemed a natural fit. Well, the sprinkles sank.

So I tried messing around with a few things, but as I mention often – small changes can make a big difference it how things turn out with baking. Often, making a cake batter that things stay suspended in means having a more dense cake and I really didn’t want that. Not at all. So after trying several things. Eventually I decided to try whipping the egg whites.

Winner!! Not only did it fix the sinking problem to have the volume of the egg whites keeping the sprinkles in place – it also make the cupcakes even lighter and more tender. Pure heaven! So in love! 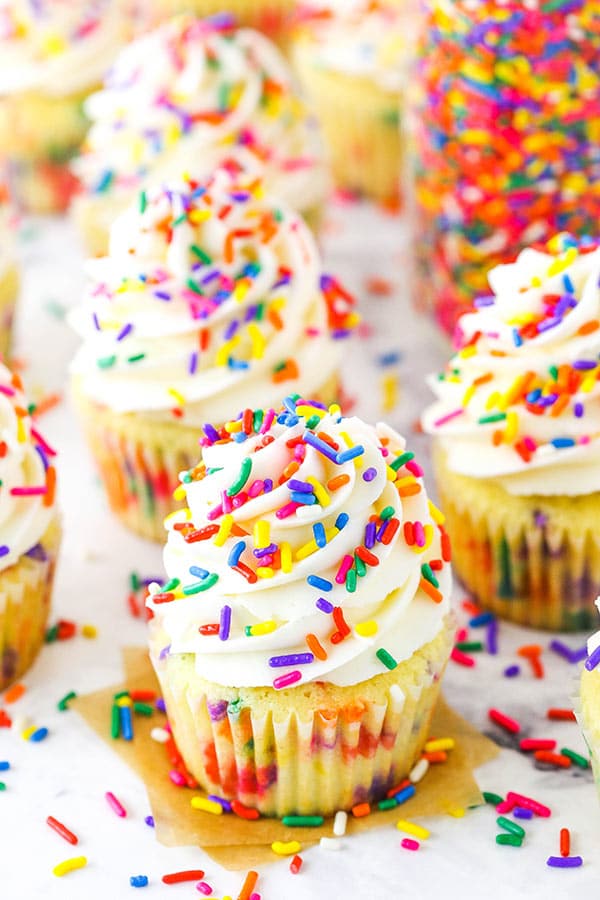 How to Make Homemade Funfetti Cupcakes

Cream the butter, oil and sugar: To start with these cupcakes, you’ll cream your butter, vegetable oil, sugar and vanilla extract together until they get light in color and fluffy in texture. If you don’t see a very noticeable difference, keep mixing until you do.

Add the dry ingredients: Now it’s time to add our dry ingredients and milk. You’ll want to add the dry ingredients in three parts and the milk in two. This part is important for making sure things mix evenly. Since the egg whites are added later, the batter is a little dry when you start adding the flour, so mixing in a couple more parts helps the batter not dry out too much before adding milk and then giving you a lumpy batter. 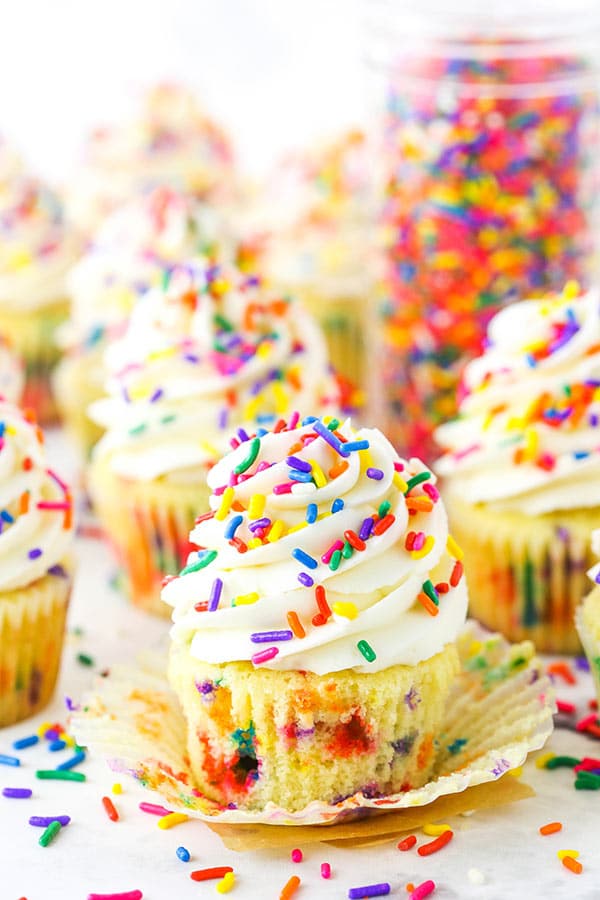 Whip the egg whites: After adding the flour and milk, set that mixture aside and whip your egg whites to stiff peaks. If you’ve never whipped egg whites, it’s super easy. Literally just add your whites to a bowl and whip them with your whisk attachment until you can lift the whisk out and they stand up straight without falling over.

Fold in the egg whites: You’ll want to gently fold about half of the whipped egg whites into your batter so that you loosen things up and don’t deflate the egg whites.

Add sprinkles and bake: Add the remaining egg whites and sprinkles, then gently fold everything together and you’re ready to bake them! 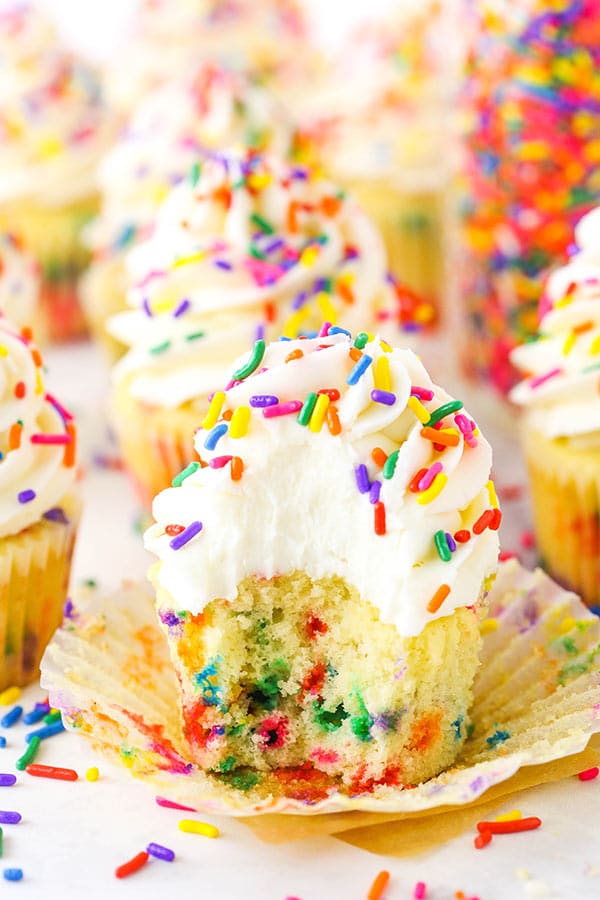 Which sprinkles are best for funfetti?

As far as sprinkles go, I recommend using jimmies (I use these). They don’t bleed as much as other types and don’t end up crunchy either.

Once baked, these Homemade Funfetti Cupcakes are topped with a vanilla buttercream frosting and plenty of sprinkles! The buttercream pairs with them just perfectly! 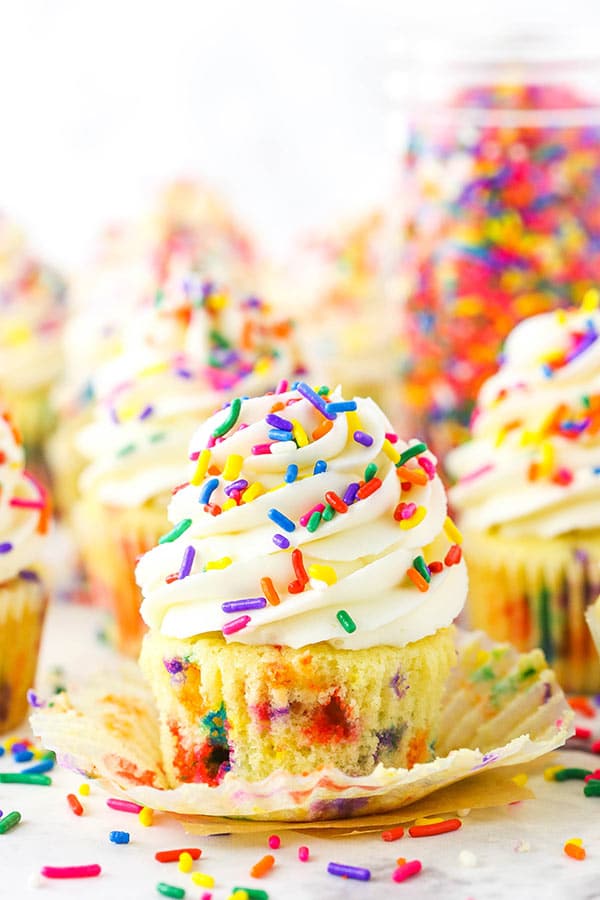 These Are the Best Funfetti Cupcakes!

After waiting for too long to share a great Funfetti Cupcake with you, I’m excited to share these because they are seriously delicious. No need for a box mix when you can just make these! They are moist, tender, fluffy and so darn good. You can even swap out the sprinkles for various color combinations for any occasion. I hope you love them as much as we did! 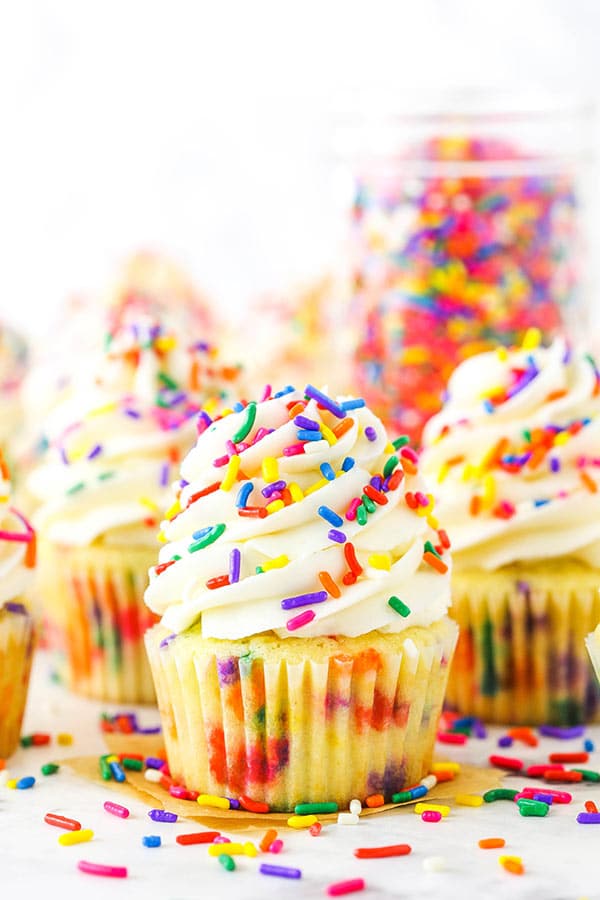 These Homemade Funfetti Cupcakes are tender, fluffy and easy to make! They’re full of sprinkles and topped with buttercream frosting for a delicious cupcake!

For something a little different flavor-wise, try substituting a 1/2 teaspoon of vanilla extract for cake batter flavoring. It makes a little unique and fun flavor.