This Vinegar Pie is a super simple old fashioned pie that has been around for years! It gets it’s flavor from a little bit of vinegar and is topped with whipped cream and a sprinkle of nutmeg!

What is Vinegar Pie?

Vinegar Pie is also known as Desperation Pie. It originated back in the 19th century. When people had trouble getting certain ingredients for flavoring, vinegar was an alternative.

From a texture perspective, vinegar pie is much like a chess pie or buttermilk pie. It’s kind of an old-school type pie that is super simple to put together. In these times of craziness where ingredients are also hard to get, it’s a fun pie to try. Along with the Wacky Cake I shared last week, this is another neat recipe that’s been around for ages.

The acidity in the vinegar actually gives the pie a flavor that is reminiscent of lemon. I won’t say that it doesn’t taste like vinegar at all, but it’s sweet and tasty and brings to mind lemon more than vinegar. Plus, like a chess pie, it gets a little bit of a crust on top when baked. That browned crust adds a lovely caramelized flavor to the pie as well.

Not to mention that when topped with whipped cream and a sprinkle of nutmeg, the flavors get even better. That nutmeg really does help tone down the vinegar and bring out the lovely flavor. 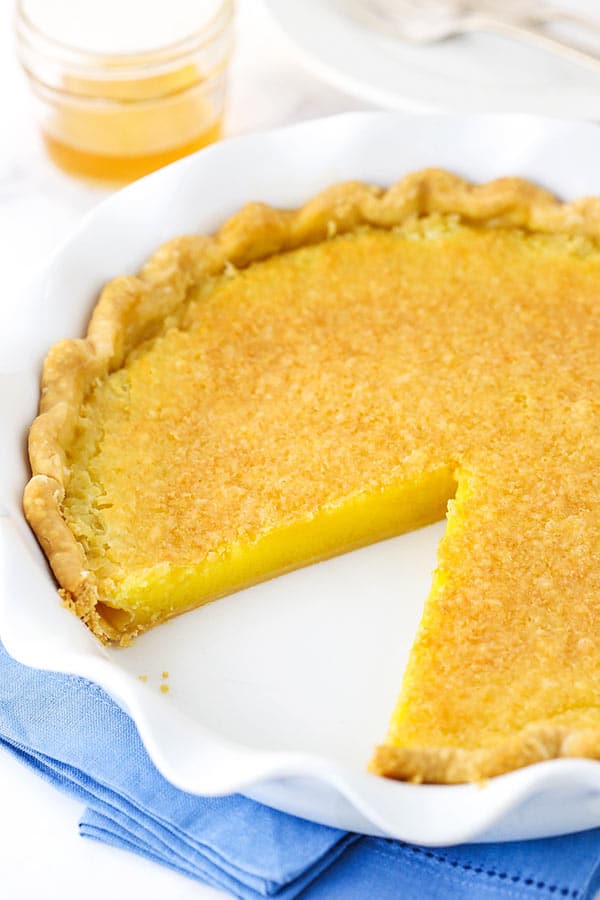 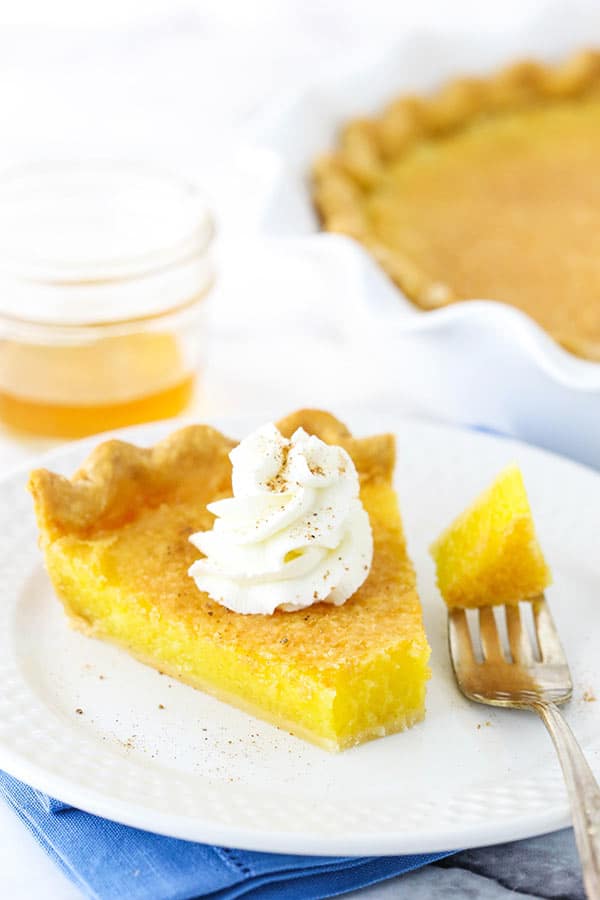 There are a couple different methods for making vinegar pie. I tried both to see which I preferred.

The first method was not my favorite. You cooked the filling over the stove until it reached a pudding-like consistency, then you poured that into the pie crust and baked it for a short bit prior to refrigerating it.

While it was a simple method, it wasn’t as simple as the second method. Plus, I didn’t care nearly as much for the pudding-like texture. Plus, the flavor was lacking for me and tasted more like vinegar.

The second method, that I ended up favoring, had much more flavor. Because the filling is baked only in the oven, the longer baking time allows for a crust to form on top. That crust (which caramelizes, as I mentioned before), gives so much flavor and the pie just isn’t the same without it. Plus, the texture of this method was more pleasing and like a traditional chess pie. 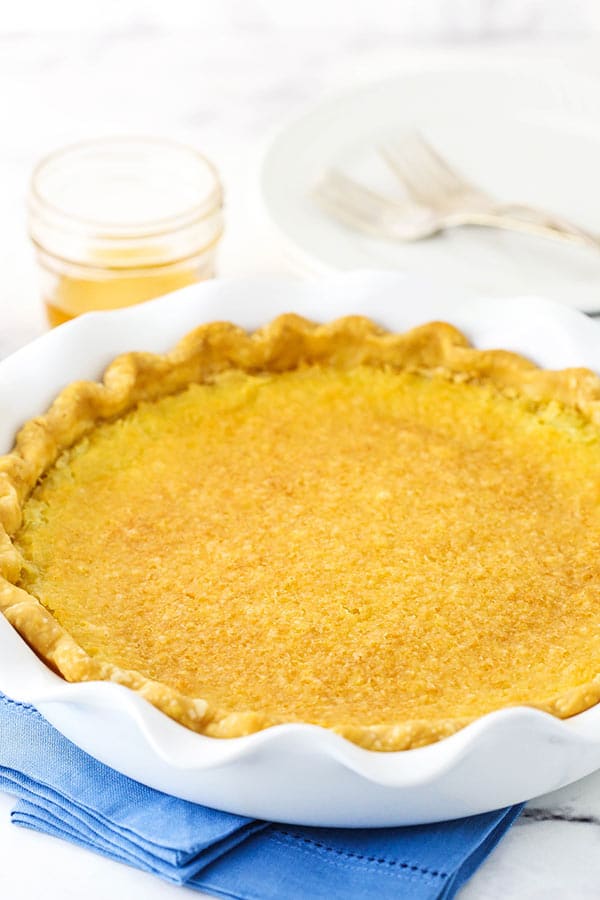 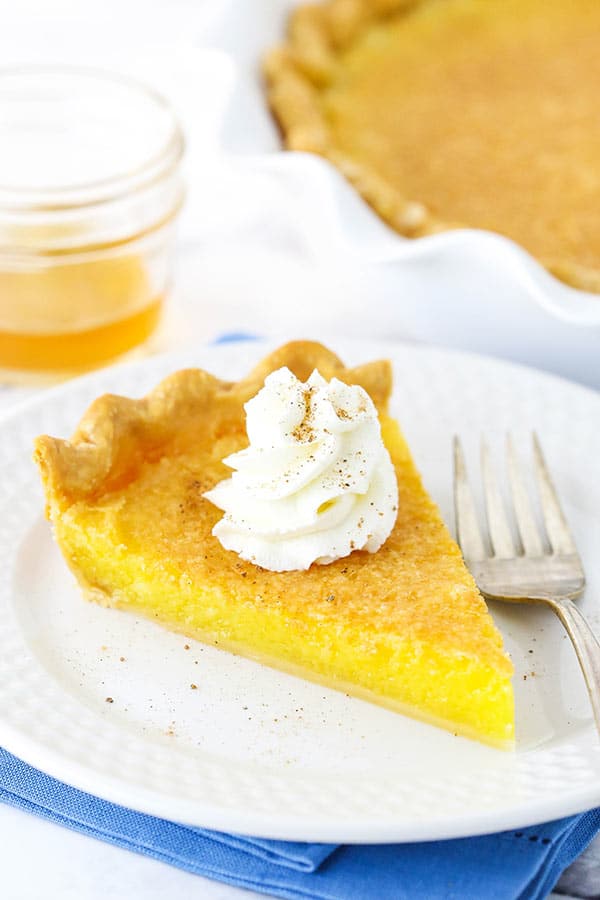 How to make Vinegar Pie

So to make this vinegar pie, you’ll start by lining your pie pan with the crust and pre-baking it.

While the crust bakes, put together your filling. This part literally couldn’t get any easier! Just add everything to a bowl and whisk it all together!

Pour the filling into the baked crust and bake for about 30-40 minutes or until the pie is set, but the center is a little jiggly.

Let the pie cool to room temperature, then refrigerate until ready to serve.

I personally really preferred this pie with some whipped cream on top and sprinkle of nutmeg. The extra flavor makes this pie!

I hope you enjoy it! 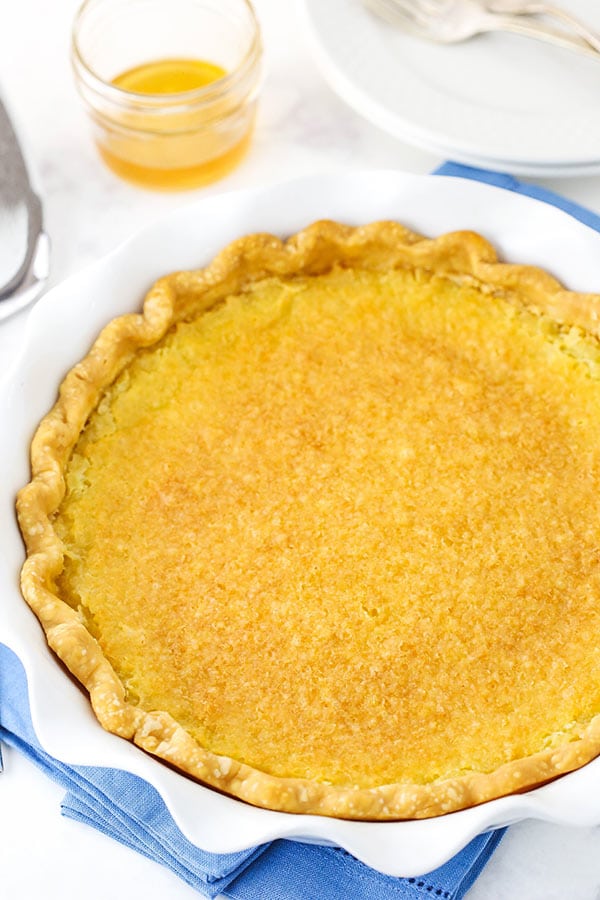 This Vinegar Pie is a super simple old fashioned pie that has been around for years! It gets it’s flavor from a little bit of vinegar and is topped with whipped cream and a sprinkle of nutmeg!

1. Place the pie crust in a 9 inch pie pan and crimp the edges. Pre-bake according to the temperature and time of the package directions. Use pie weights to keep the crust from puffing up too much when baking.
2. Adjust oven temperature to 350°F, if needed.
3. In a large bowl, combine the eggs, sugar, butter, vinegar and vanilla extract. Whisk well to combine, then pour into pre-baked pie shell.
4. Bake pie for 30-40 minutes, or until pie is set but a little jiggly.
5. Allow pie to cool to room temperature, then refrigerate pie until cool and firm and serve.
6. Serve pie with whipped cream and a sprinkle of nutmeg. Don’t skip the nutmeg – trust me!

Recipe modified from Taste of Home.