This German Chocolate Cake recipe is a classic! The moist chocolate cake paired with coconut pecan filling and chocolate frosting is so delicious together! 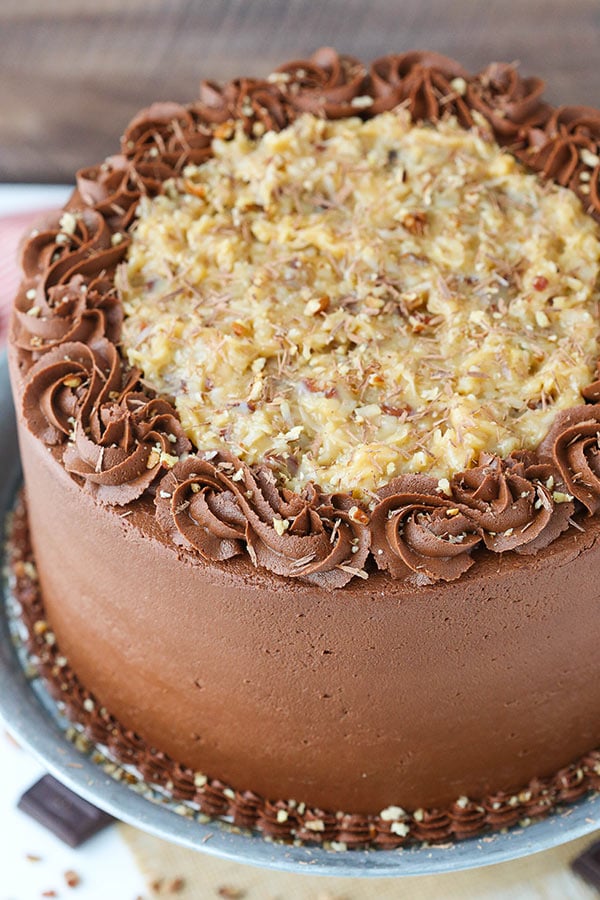 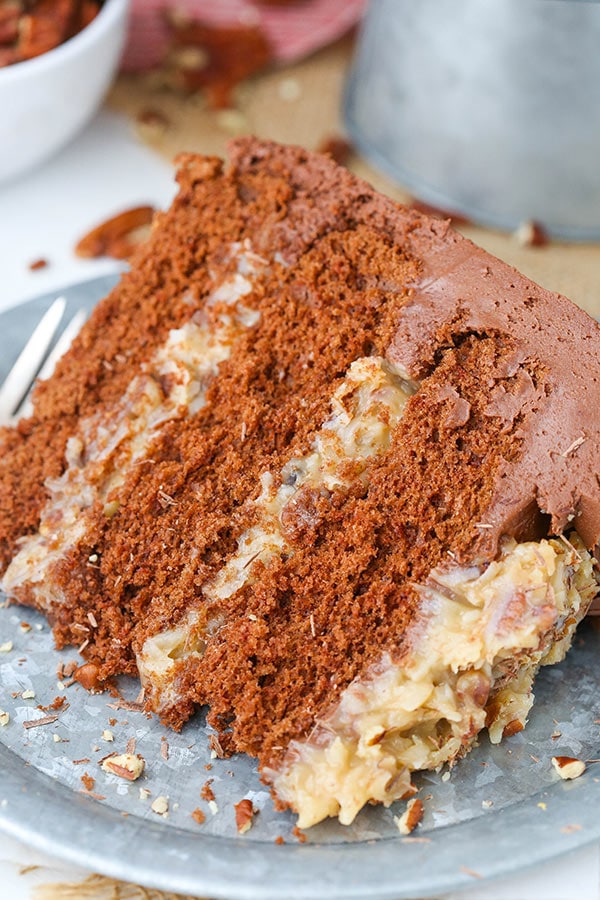 I am so excited to share this cake with you today. It’s been a long time coming! I’ve got a German Chocolate Cheesecake and German Chocolate Cookie Stacks, but no actual cake. Crazy! I actually first made this cake a couple years ago, but wasn’t completely happy with it so it got pushed aside until now. It’s officially ready and I can’t for you to try it!

Why is it Called German Chocolate Cake?

German Chocolate Cake is one that I’ve seen many people ask questions about. The main one being, “Why is it called German? It’s not German.”

The chocolate blend is actually a sweet one. Most cocoa used in cake is unsweetened. The German chocolate isn’t quite as strong as unsweetened cocoa and therefore the cake isn’t always as chocolatey as you might expect. But its signature comes from the melted chocolate itself used in the cake, the buttermilk and the whipped egg whites.

And of course no German Chocolate Cake would be complete with the coconut pecan filling! Pure heaven right there. Eggs, evaporated milk, sugar and butter are cooked until they thicken and almost caramelize a bit. With the addition of coconut and pecans at the end, the filling reminds me a good bit of a samoa girl scout cookie, which is my fave! 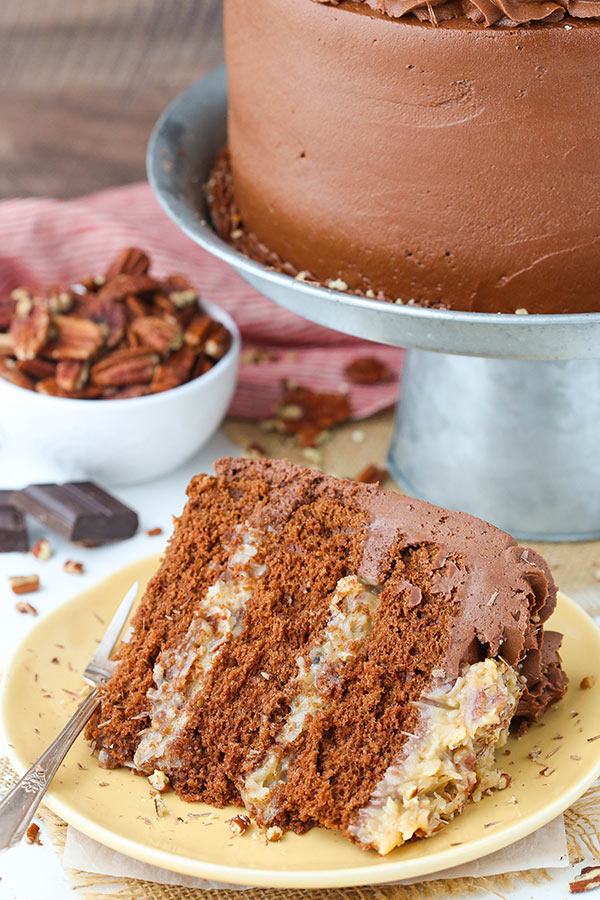 Do You Frost German Chocolate Cake?

Some people like to leave a German Chocolate Cake unfrosted and just have the layers of cake and filling, but I really love the addition of the frosting. Not only do I love frosting, the chocolate frosting uses actual unsweetened cocoa so it does add a little more of the classic chocolate flavor to the cake without overpowering the cake itself and the filling.

How to Make German Chocolate Cake

The cake layers are made beginning with the creaming of the butter and sugar. Be sure to fully cream them together, looking for a lighter (in color) and fluffy mixture before moving onto the next step. Next is the sour cream and vanilla, then the melted German chocolate.

The eggs are separated before adding to the batter. The yolks will be mixed into the batter first, followed by the dry ingredients and buttermilk and water. The final step is whipping the egg whites and folding them into the batter. It helps create a fluffy cake with a very light crumb. Just be sure to carefully fold the egg whites into the cake batter so that you don’t deflate them.

When you’ve got everything made, you’ll layer the three layers of cake with the coconut pecan filling and then frost the cake with the chocolate frosting. Seriously, the combination is divine! If you’ve never tried German Chocolate Cake before, what are you waiting for?! Now is the time! 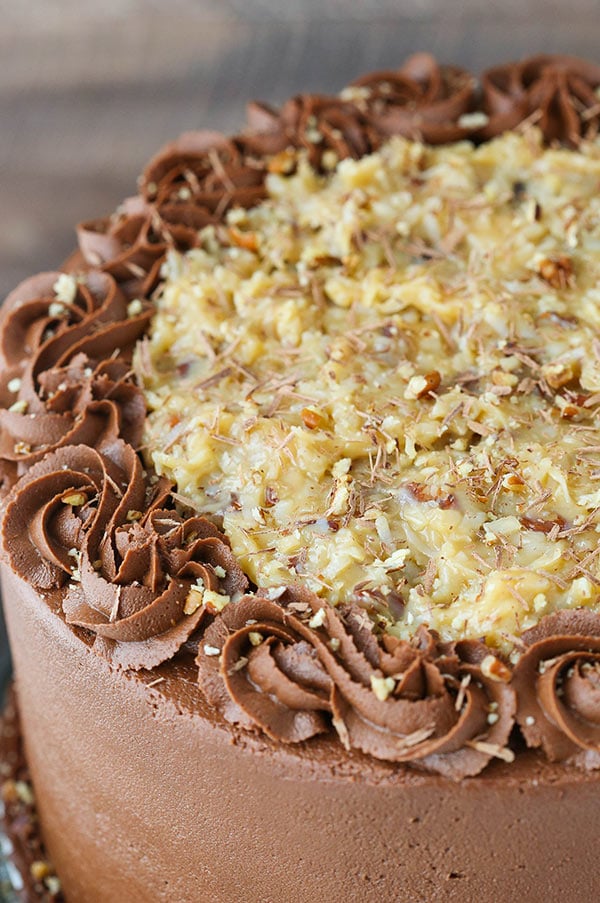 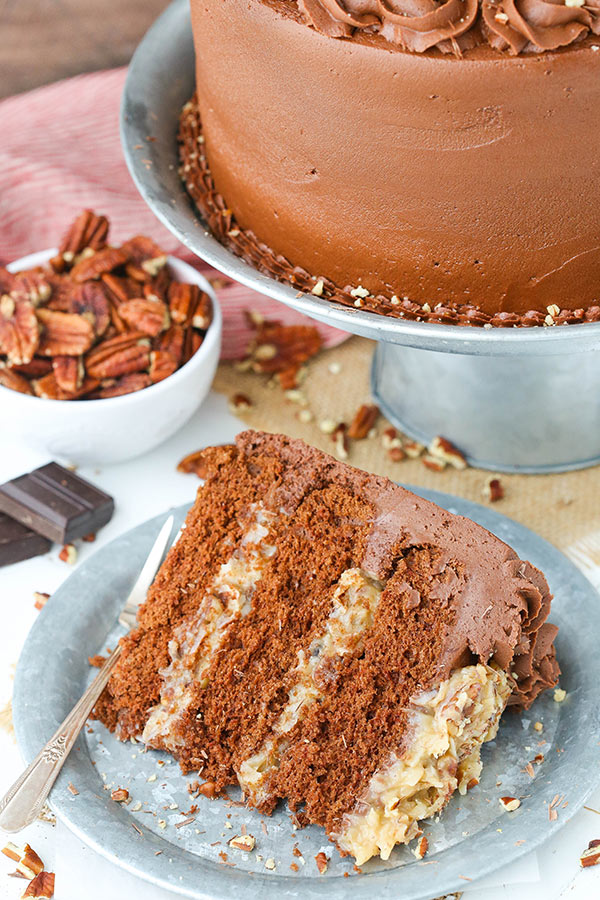 This German Chocolate Cake is a classic! The moist chocolate cake paired with the coconut pecan filling and the chocolate frosting is just delicious together!

TO MAKE THE FILLING:

1. In a large saucepan, combine the egg yolks, milk and vanilla extract and whisk until well combined.
2. Add the sugar and butter and cook on medium heat for 12-15 minutes, or until thickened and almost pudding-like and golden brown, stirring constantly.
3. Remove from heat and stir in coconut and pecans.
4. Set in the fridge to cool completely.

TO MAKE THE FROSTING:

Chocolate Cake Recipes for Any Occasion