I’ve been holding back some news for a while, but the cat’s officially out of the bag – I am pregnant! We are adding a third little kiddo to the clan and couldn’t be more excited! Our sweet little girl will be joining us in early November! 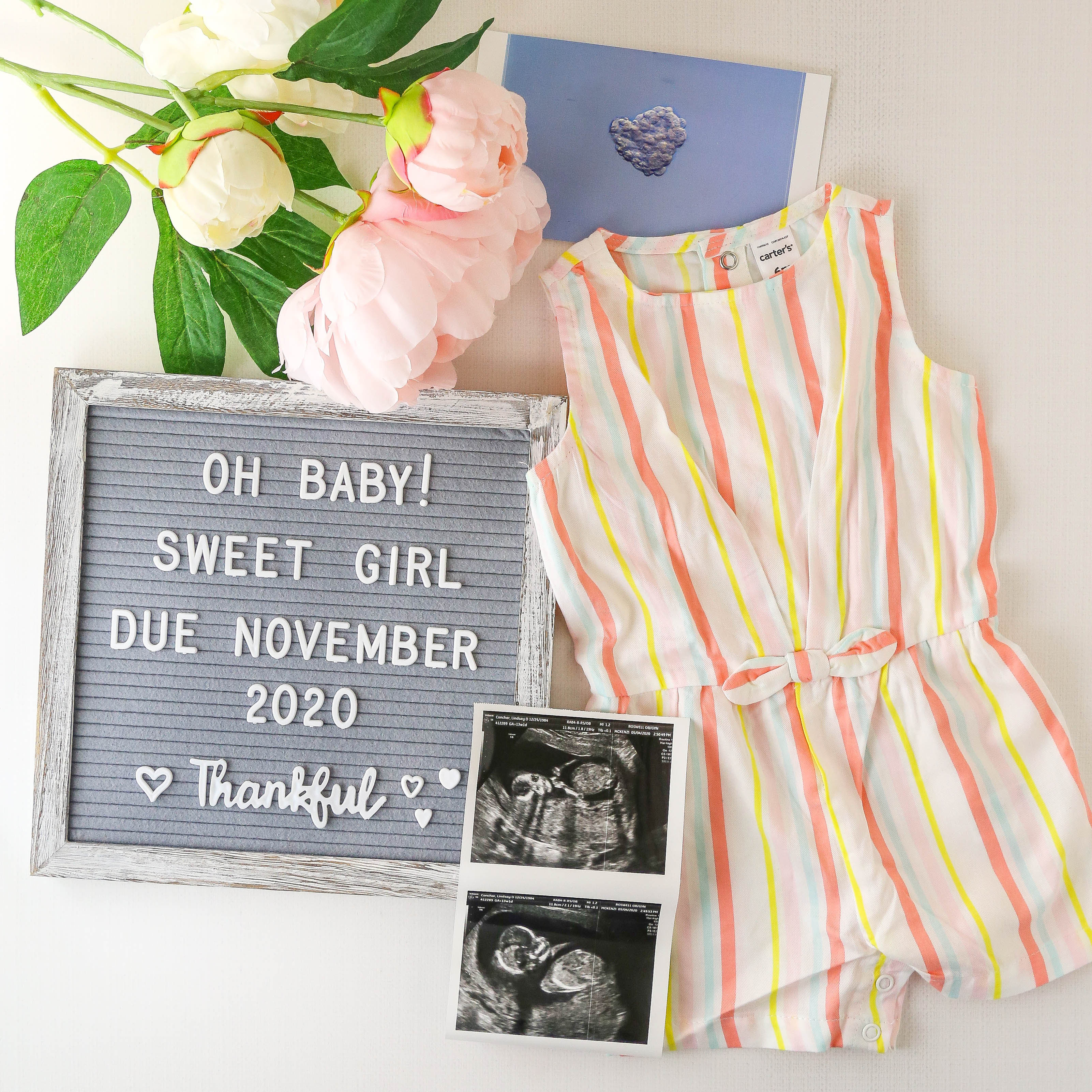 Is this a quarantine baby?

Nope! LOL. I had to go there because I know that’s the big joke right now. But we actually began talking to our doctor about starting the IVF process again back in October. Our embryo transfer was February 21, about month before life changed and shut down. I’m now just over 13 weeks pregnant and due in early November.

Did you do IVF again?

I sort of already gave that away, but yes. We were very intentional about this. If you haven’t read about our IVF journey, check it out on the lifestyle part of the blog. I shared the whole process.

But back when we did our egg retrieval and that whole process, we were fortunate enough to end up with 7 healthy PGS tested frozen embryos after our first and only retrieval cycle. For those who don’t know much about IVF – that’s a pretty amazing number. I felt strongly from the moment we knew about those embryos that if we were to have multiple pregnancies, I’d want to be sure to use those embryos.

So once the boys were born, we intentionally prevented pregnancy (birth control), knowing we still felt the same way.

So anyhow, back in October we met with the doctor. I had another hysteroscopy in November. If you read about my first hysteroscopy back when we started IVF, you may remember that it was surprisingly painful. Crazily enough, I didn’t even feel it this time. I was fully prepared for the pain, but nothing came. And then it was over. Nutty!

Anyhow, I knew I wanted to wait until after the holidays before we started anything. I had hoped to keep this pregnancy a secret from friends and family since it was all so open last time and we thought it’d be fun to surprise people. I knew if I stopped drinking at the holidays, it would be noticed. 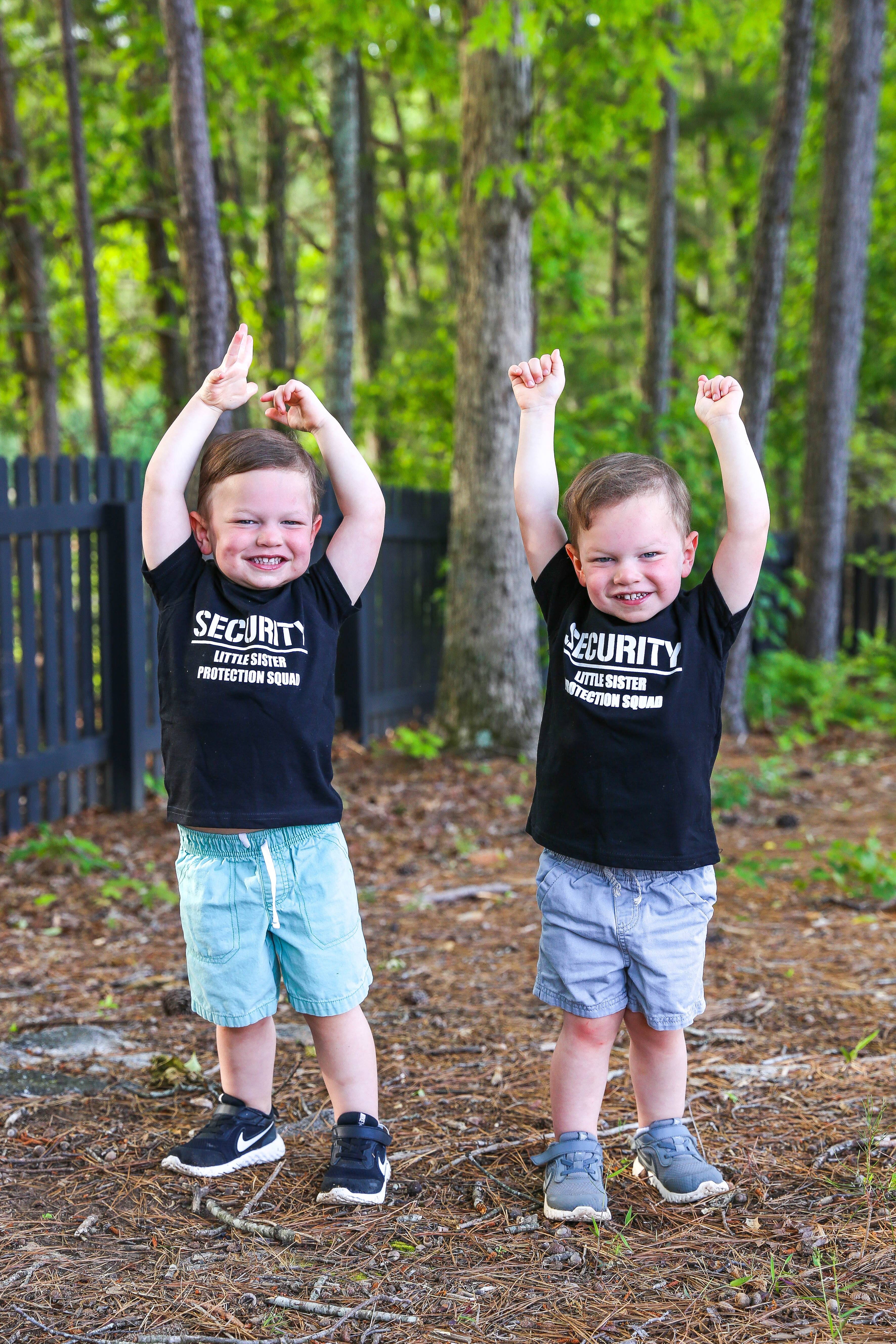 So things started in January and the transfer was scheduled for February 4, with a pregnancy test on February 14 (hello Valentine’s Day!). I had planned our entire month of February around those dates. I delayed the boys’ birthday party (their birthday is February 2) to February 22 so that I didn’t have to stress about the party at the same time as the transfer and so that family who would be around wouldn’t notice me taking pills and shots. I arranged meetings around those days, etc.

But God had other plans. No joke – every time I make plans and count on them, He reminds me that He’s in control. Every. Single. Time. LOL. I should have known.

So when I went in for my last check up before I would have started the progesterone shots, they saw that I’d ovulated already. This meant that things had to be delayed.

So when I got my next cycle, I called and they rescheduled everything. And what was the new transfer date? THE DAY BEFORE THE BOYS’ PARTY. Ironic? Oh, yea. All the stuff I’d tried to avoid stressing about at the same time was going to happen at the same time. LOL.

So even though we wanted it to be a secret, I finally told my mom. I had to start my shots when I was visiting her on my own and I needed her to help me with the shots. I’m a wimp and to this day I have not ever given myself one of the shots. Sorry, not sorry. I really wanted to be able to give myself the shot and keep things a secret, but I just couldn’t. A big, long shot in the butt wasn’t something I was prepared to do.

Plus, my parents were going to stay with us for the boys’ party and it was going to seem weird that the day before their party I was literally doing nothing (I prepared everything the days before). Not to mention I needed some help with last minute things. So basically, I needed help and I needed to be able to explain why. Secrets are just not something I’m good at keeping, apparently. Oh well.

So obviously the transfer happened and it worked! I was pregnant. They do three blood tests to confirm and all looked good.

The day we went in for our first ultrasound was the Monday after they’d shut everything down here. It was kind of weird. We were the only patients there and it was just strange. But all was well. The baby was measuring perfectly – and there was only one! Yay! Naturally, we were a little nervous for twins again, since last time our single embryo split into twins.

This pregnancy has been fairly different than with the twins. You would think that twins would be harder, but as far as the first trimester goes, this one has been a little harder. It might be in part because I have two toddler to take care of and they are high high energy and wear my butt out.

One big thing is just that I’m so tired. All the time. Totally normal, I know. I do think that having two toddlers makes this harder this time around. And there were a few weeks there where I wasn’t just tired, but truly fatigued. Just showering in the morning would take all of my energy. Fortunately I’m back to just tired. Better, but still not easy. 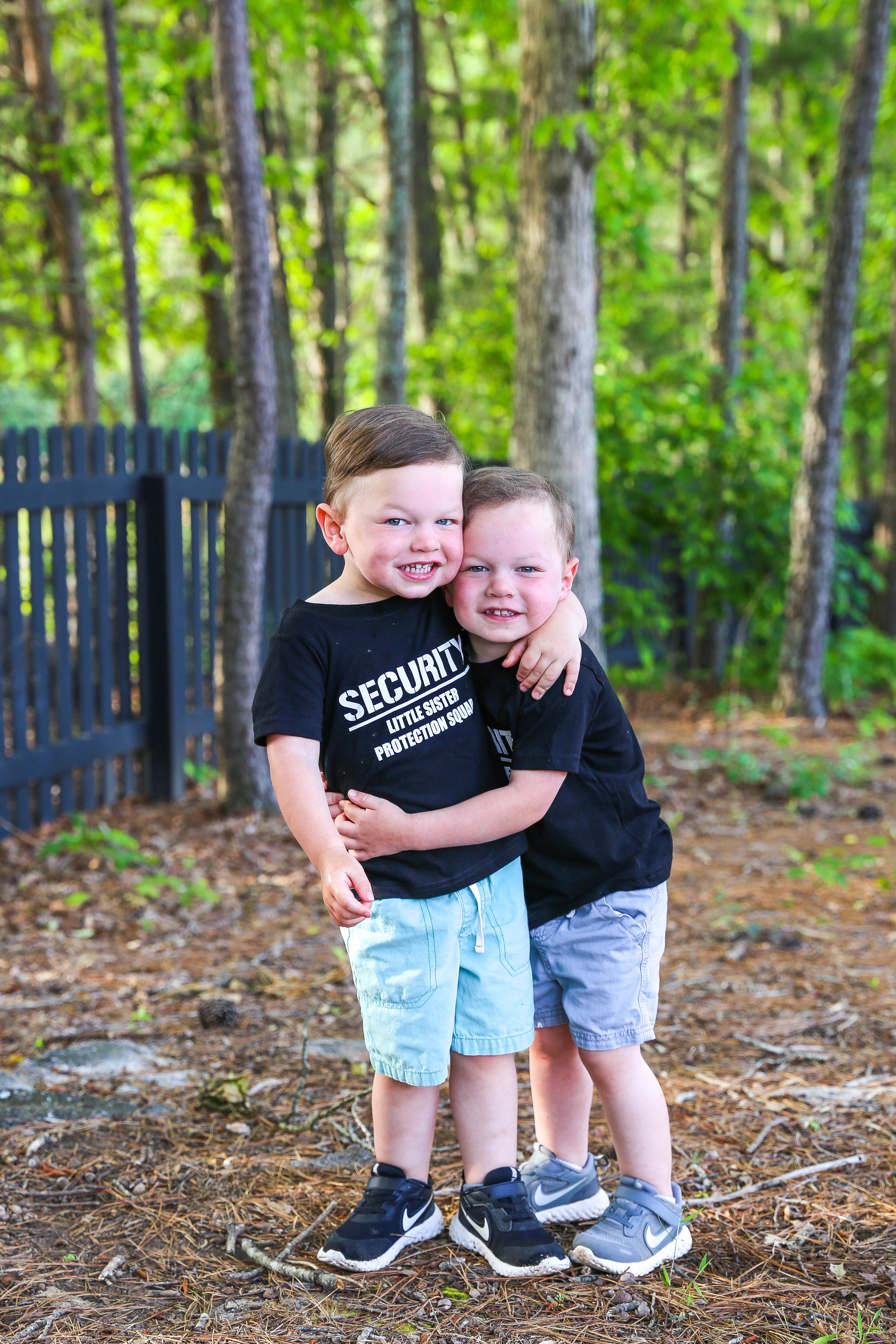 Also with the boys I had heartburn that was pretty bad, but never had nausea or food aversions or anything like that. This time around, food and I aren’t such good friends. I haven’t had any vomiting, but the thought of food totally turns me off. Foods I normally love smell like vomit. My stomach is upset whenever I eat, making it a slow process. I can’t stand chicken, but still like beef, mostly ground beef. And I just always have this feeling in the back of my throat like I might vomit any minute. It’s not super fun.

Fortunately, about 5-6 days ago a lot of that started calming down. Food and I are slowly becoming friends again, which is nice. I still feel averse to some of the same foods, but I don’t feel so sick when I eat.

None of this is horrible, of course, it’s just so different from my other pregnancy. They say you’re more sick with girls and so far for me that has been the case.

Being pregnant during a pandemic

This could not be a stranger time to be pregnant or have a baby. I have several friends who’ve had babies in the last month and it’s just a crazy experience.

But so far for us, it’s been ok. The hubs can’t come to any appointments, which is a bummer. I have to wear a mask at the doctor’s office, which is fine by me. The hardest thing is not being able to see people, which is hard on everyone – not just pregnant people. We have pretty much quarantined throughout this whole thing so far. Our question is just when will it end? When will we feel like we can see our families again? If there’s no vaccine until next year, or even later, what does that mean for seeing our families? With me being pregnant, I’m inclined to being even more careful, but boy is it brutal. Hard, hard, hard.

I’m the most protected of us at the moment. No grocery shopping or anything. But other than not grocery shopping or seeing friends and family, it’s not horribly different for us. I didn’t have the boys out a ton over the winter because they were still a little tough to take out alone and every time I took them out, they got sick. I was really looking forward to taking them out and doing a bunch of fun stuff this summer, so that is a real downer. But they aren’t really old enough to understand or notice, so in many ways it’s easier for us than those with older kids.

Plus, we started potty training a week and a half ago, so that’s keeping us occupied. They are doing very well.

So that’s all I can think of! We are having a little girl and can’t wait! The boys don’t quite get it yet, but they will eventually. The baby is coming either way!

We are excited to complete our family and so thankful that God has granted us another little one to love on! We know it doesn’t come easy for everyone (and didn’t for us), so we know just how big of a deal it is. We are forever grateful and look forward to meeting our little girl in November. 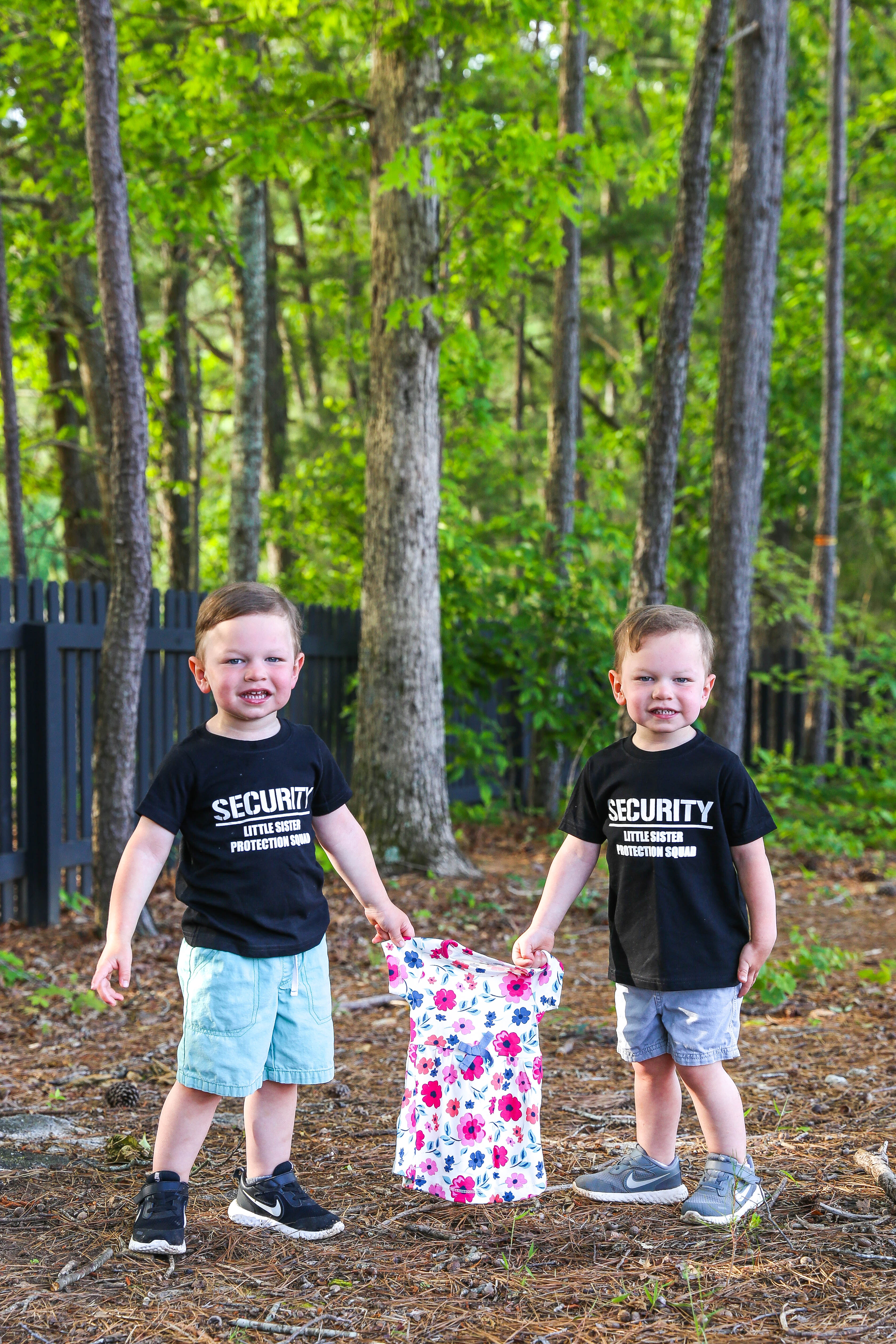