These Shrimp and Crab Nachos are one of my very favorite appetizers! Filled with shrimp, crab, three cheeses and some tasty spices, you won’t be able to resist them!

For another yummy shrimp recipe, you have to try my Spicy Sriracha Shrimp Tacos! 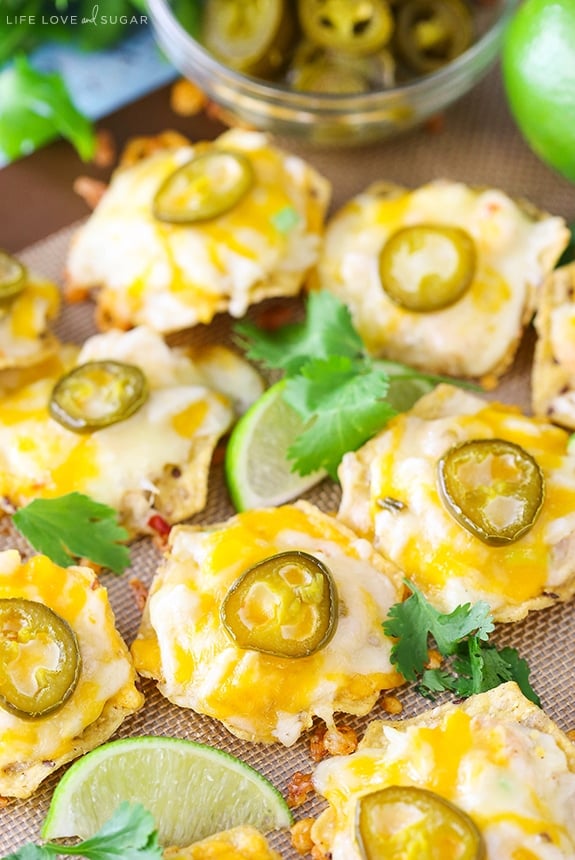 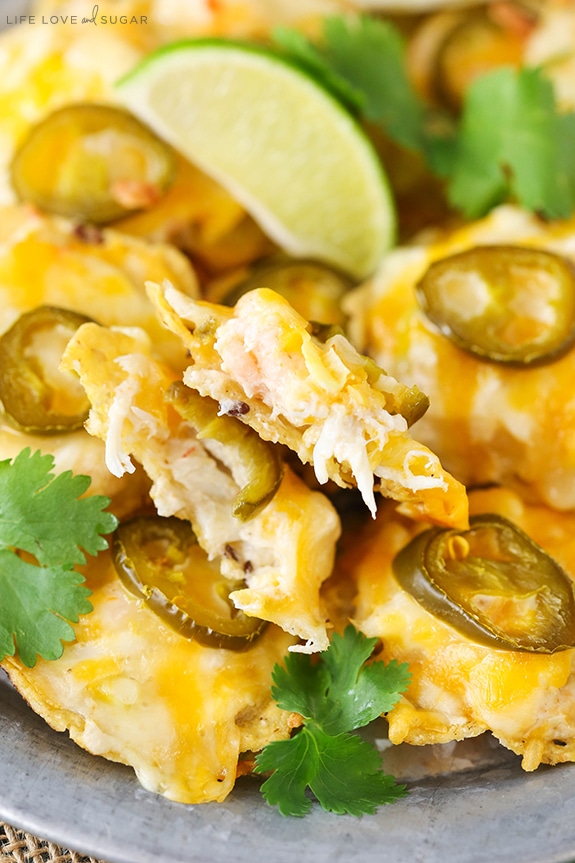 I know what you’re thinking – whoa, whoa, whoa, am I in the wrong place? Where’s the cake?!?

It’s a shock, I know. I mean, nachos? What in the world is going on! Well folks, I decided to switch things up a bit today. I hope you like it! 🙂

Truth be told, I actually posted a fair number of savory recipes back in the old days. If you haven’t been reading since the beginning then you’d never know, but it’s the truth. I shared a few of my favorite and regular dinner recipes, in fact. If you go check them out, just know that they are all from way back before I’d improved my photography and got a fancy camera. No judgements! I actually started cooking long before I started baking and I’d intended to share more savory recipes, but things evolved and here we are. 🙂

Anyhow, no need to fear. The sweets and cakes aren’t going anywhere. But I might post a savory recipe every now and again if you guys are feelin’ it. Since I too have to eat regular food every day and not just sweets, it kinda makes sense. AmIRight? 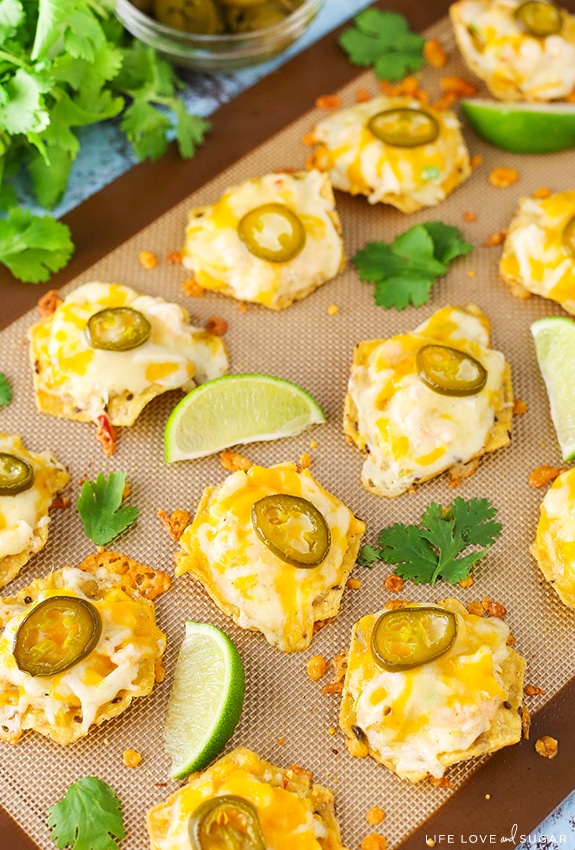 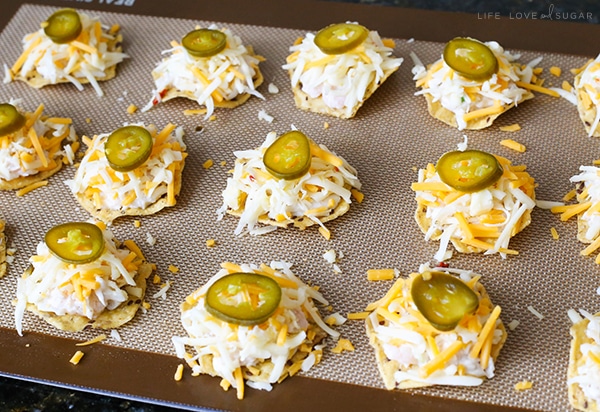 So for my first (but not really, even though it kinda feels like it) savory recipe, I decided to make a copycat version of a favorite appetizer. The nachos are from a restaurant called Marlows Tavern nearby and they are quite literally the best nachos ever. The first time I had them, I knew we’d be friends for life. Plus, cheese. Always yes to cheese.

Why I Love This Nachos Recipe

Often nachos are a massive pile of chips with all the toppings thrown on top. If you’re like the hubs and I, eating them is a constant battle between wanting to take all the toppings – especially the best cluster of toppings, which the hubs calls “the nucleus” – and trying not to be rude and leaving toppings for the other person. The struggle is real.

These nachos eliminate that problem because each and every chip is its very own nacho! Topped with lots of filling and gooey cheese! Now the only struggle is who gets to eat more of them. 🙂

Tips for Making These Seafood Nachos

The two most important ingredients, naturally, are the shrimp and crab. Because the topping is going on each chip and has somewhat small real estate, depending on your chosen chip size, small salad shrimp are best. If you can’t find them in your store, you could get regular shrimp and cut them into smaller pieces. I was able to find the salad shrimp and the crab all pulled and ready to go at Whole Foods.

The shrimp are cooked with olive oil and some cumin and garlic, then added to the crab along with cream cheese, green onions, sour cream and some spices. Old Bay to be exact. Perfect on seafood and a great mix. Cheddar and jack cheeses are combined and sprinkled on top, then topped with a jalapeño. That jalapeño is entirely necessary in my book and gives it just enough kick!

Seriously, these things are amazing. I think I totally nailed the copycat version. They take a touch of time since you make the chips individually, but they are so worth it. I’ve even been known to have them as a dinner with a little salad. Then I have more room for cake at the end. 😉 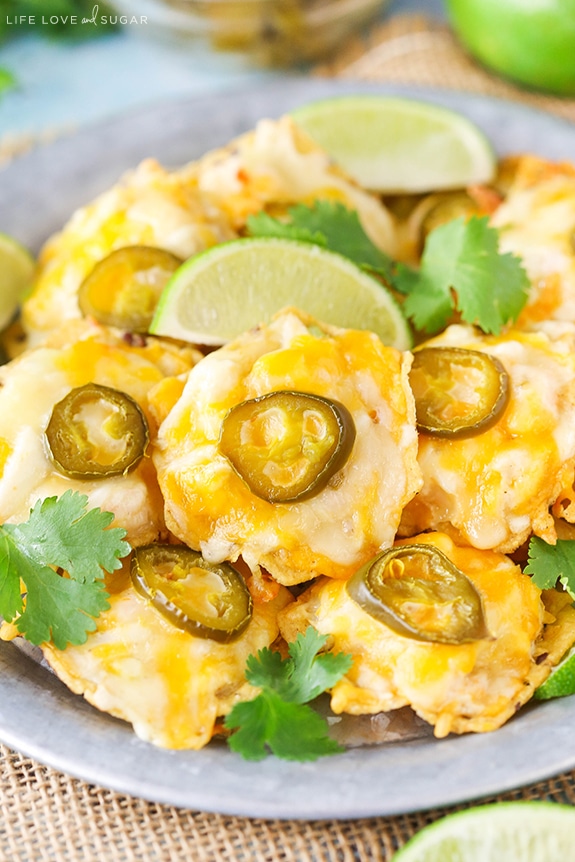 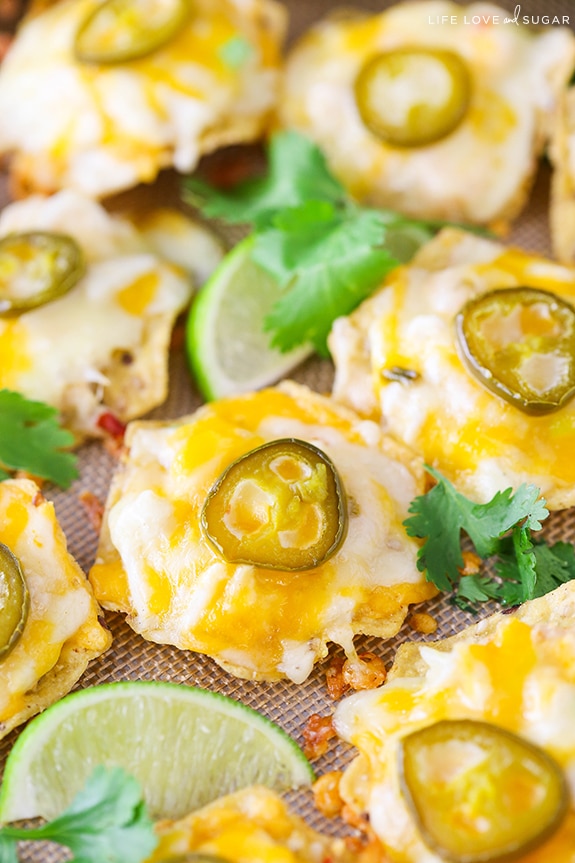 These Shrimp and Crab Nachos are one of my very favorite appetizers! Filled with shrimp, crab, three cheeses and some tasty spices, you won’t be able to resist them!

1. Heat the olive oil in a large non stick skillet over medium heat. Add the cumin, garlic and shrimp and cook until the shrimp are pink.
2. Drain the juices from the shrimp, then combine the shrimp, crab meat, cream cheese, sour cream, green onions and old bay seasoning in a large bowl. Add salt and pepper to taste.
3. Combine cheddar and jack cheeses.
4. Spread tortilla chips out on a baking sheet lined with a silicone baking mat or parchment paper.
5. Spoon the shrimp and crab mixture onto each chip, then cover each chip with cheese and top with a jalapeño.
6. Broil at 350 for 8-10 minutes, or until the cheese is melted.

If you can’t find small salad shrimp, you could use regular shrimp and cut them into smaller pieces.