I can’t believe it’s been 6 months since I wrote that we were trying acupuncture for infertility. Not only because I had fully intended to give up update by now, but also because I can’t believe I’ve been going for that long. This could be a long post. 😉

I’m still getting acupunctured (my new word) once a week and drinking the herbs three times a day, every day, with at least 4 hours apart and before meals. I’ve attended two blogger retreats and one blogging conference during this time and let me tell you how unfortunate it is to pull out little baggies of brown liquid to drink before everyone digs into our awesome blogger meals. #awkward Several people have wanted to taste them though. 🙂

But I have learned a lot. Too much probably. I have a friend who is going through something similar with me. We’ve both had a miscarriage and have struggled to get pregnant a second time. I hate that she’s going through it too but I’m so grateful for a buddy. We talk and text about it a lot. We compare doctor’s notes and at this point we are both measuring our BBT (morning waking temperature) and comparing our charts. It really is nice to have someone to talk to who doesn’t get tired of hearing it because they are just as interested in the never-ending non-sense.

So one of the first things I’ll mention is one of the first questions I usually get – does it hurt? I think in my first post I said “not really”. And that’s basically still true. However I have a few areas that have hurt in the past – sharp pain when the needle goes in that fades fairly quickly but is still unpleasant. So I’m always nervous when he gets to my pelvis area and my hands. And then this week a couple spots on my feet were uncomfortable. I’ve got matching bruises on each foot to prove it.

Which brings me to another interesting tidbit. Most of the points where he adds the needles are in my legs, not my pelvis/abdomen like I would’ve thought. Yes, I get some in my pelvis, but most are in my legs and feet. Apparently there’s a lot of fertility points down there. Who knew?

So next let’s talk BBT. I had to start measuring it after about 3 weeks of acupuncture. I’m not going to lie – it’s a pain. You have to take your temperature with a special thermometer every morning (weekends included) at exactly the same time. For me that is 6am. If your time is off, your temperature won’t be accurate.

Now for the why. BBT is the primary thing used by my acupuncturist to see how things are going and how my body is responding to the needles and herbs. That and what I tell him about physical changes I notice. I’m using an app called Fertility Friend, if you’re interested.

One of the coolest things about this app is that it actually lets you know when you’ve ovulated. That little red vertical line is when ovulation occurred. The part of the cycle before ovulation usually has lower temperatures and corresponds with the production of estrogen that gets your egg nice and ready for ovulation. The second half of the cycle usually has higher temperatures and corresponds with production of progesterone. This part of the cycle is all about the egg and sperm meeting and finding a happy place to chillax and grow for 9 months.

One plus of taking your temperature is that it drops just before you get your period. For those who have or are going through this, you know that the moment you get your period can be very emotional. It’s not a happy moment and for some it’s downright devastating. Seeing that drop in temperature and knowing the period is coming is actually quite helpful in avoiding that momentary emotional break. 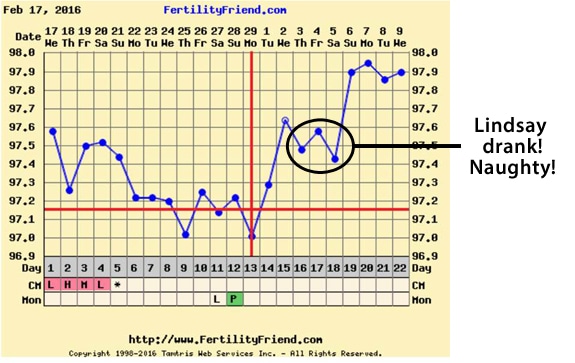 The other interesting thing I’ve learned is that drinking alcohol effects your BBT. I was away last week at a blogger retreat and drank wine the nights I was there. You can see in my chart below that the temperature was supposed to spike, but stalled about halfway there, then went all the way up the first day after not drinking. Crazy! I showed my acupuncturist Tuesday and he was totally confused. Apparently drinking is supposed to make your temperature rise, not fall. Whoops? I have no explanation.

So there’s a whole lot more you could know about BBT and hormones and all that jazz. If you truly want to know about something specific, feel free to email me and I’ll do my best to answer if I know. You can also google. I do that a lot. 🙂 But for most, that’s plenty of info on how it actually works. 🙂

As for my particular charting, it is frustratingly different every month.

The other wonderful thing about my acupuncture treatment is that it has empowered me a bit. My acupuncturist has asked all kinds of questions that my OBGYN has never asked. Even as simple as, “Have you done this test to see how your hormone levels are?” It’s a pretty basic test that’s pretty normal for those going through infertility and not once did my doctor ever suggest it – in THREE YEARS! It took my acupuncturist telling me I needed it for me to talk to my doctor to have it done. Talk about frustrating. It has made me a little wary of doctors – particularly OBGYNS. While I’m sure mine had no bad intention, I feel like they are so used to pregnant people that they don’t know what to do with one who is struggling. My friend’s doctor has been more on the ball, fortunately.

So in the process of the testing, my old doctor left the practice and I got a new guy. I actually like him. I told him what was going on and he worked with me on the blood tests. There are two different ones done on specific days of your cycle that test your levels of hormones for that part of the cycle, plus a couple other things. All was good.

So he offered to put me on Femara or Clomid – my choice. My acupuncturist recommended Femara, so I went with it.

Now, what is it? Both are medications to help women ovulate who aren’t ovulating. I wasn’t having that problem, but it is also routinely given to women to try and help with getting pregnant – somehow. For some it works, for others it doesn’t. I was given a 3 month prescription that I began in November, I believe.

Spoiler alert: It didn’t work. So this month is my first month post-Femara.

The other recent change that I hadn’t mentioned yet is that I actually went part time at my other job (outside of the blog) at the beginning of February. Around October/November, I got to a point where I was so overwhelmed I couldn’t keep going like I was. I was able to talk with the hubs, our accountant and my job and work out a wonderful part-time situation. It is truly a blessing. I wouldn’t say I’m any less busy, but maybe a little more sane. 🙂 Since I’m convinced stress is a big factor me in all of this, it’s pretty awesome that I’m able to work part time and be able to finish up the cookbook.

I’d say the last big change lately is my mindset. In late December, with all the holidays, I had a bit more time than usual to reflect. I realized that so many of my conversations with people and so much of what my thoughts focused on was about this baby stuff. And while I totally understand why that was, I was tired of hearing myself talk about it and think about it. I realized that this focus on the one thing that didn’t seem like it was going right in my life was completely blinding me to all the good happening. I was totally missing my chance to enjoy it. And while I think I’ve thought these things before, this time it really hit me.

I mean, I’m writing a cookbook. A cookbook! I want to enjoy the torture. 😉 It’s a crazy awful and yet strangely wonderful experience – and I need to fully experience it. Not to mention that life is just so good in many other ways. God is so good! Why was I so focused on this one thing when I know that ultimately God is in control of it anyways? I need to enjoy all that he’s put before me now and not worry about that one thing that doesn’t seem like it’s going right. Truth is, even though it isn’t happening in my timing, God’s timing is even better. And I look forward to it.

So I made the decision and changed my focus. That’s not to say that what I’m doing has really changed. I’m still going to acupuncture. But the way I’m thinking has changed.

We are reading this book in our small group right now, A Praying Life, and a sentence that was in the chapters we read for this week mentioned that the more we look for joy, the less we’ll find it. But the more we look for God, the more joy we’ll be led to and find. It speaks right to me. I’m focusing on God and all that he has for me right this second. I’m enjoying these last few torturous weeks of the book. 😉

And after that? Well my acupuncturist has already brought that up. Have we thought about what’s next? In fact, he brought it up the same day as the hubs and I all but died. I explained to the hubs that I didn’t really love the idea of jumping from the stress of this book into appointments and more and more stuff around getting pregnant. At least not right away. I need a month or two to just be me and focus on things outside of myself. And no joke, I have had so many people jokingly ask me what I’ll do with myself when the book is done. I literally can’t wait to lay outside and feel the sun in my face. Baking is an indoor sport and I’m really looking forward to spending some time outside and relaxing.

And who knows, maybe God will decide it’s finally time. Even if he doesn’t, we’ll keep on keeping on.

Our baby journey: The next steps and HSG

A Day in the Life
More from Slice of Life